I was made aware of it by a fairly large youtube channel, so that could be a factor.

Loving this game so far. It would be nice to be able to know what an enemy attack does before it happens, but learning from experience hasn’t been too painful.

But if you have 1000 hp and passive healing, paying 100 life to fill up on star potions isn’t a big deal.

The base 9 floors are not terribly difficult and can generally be beaten with the starting items (powered up with, for example, gems and whetstones).

Well, iirc, Star Potions are one of the potions you can get from her. Those can make golden whetstones.

What’s with the Cursed Whetstone?

Bible is OP and makes it pretty easy.

(But, actually, it’s garlic that is OP. Shhh)

This is probably my best run so far. The attractor orb really helps push those level numbers up at the end. 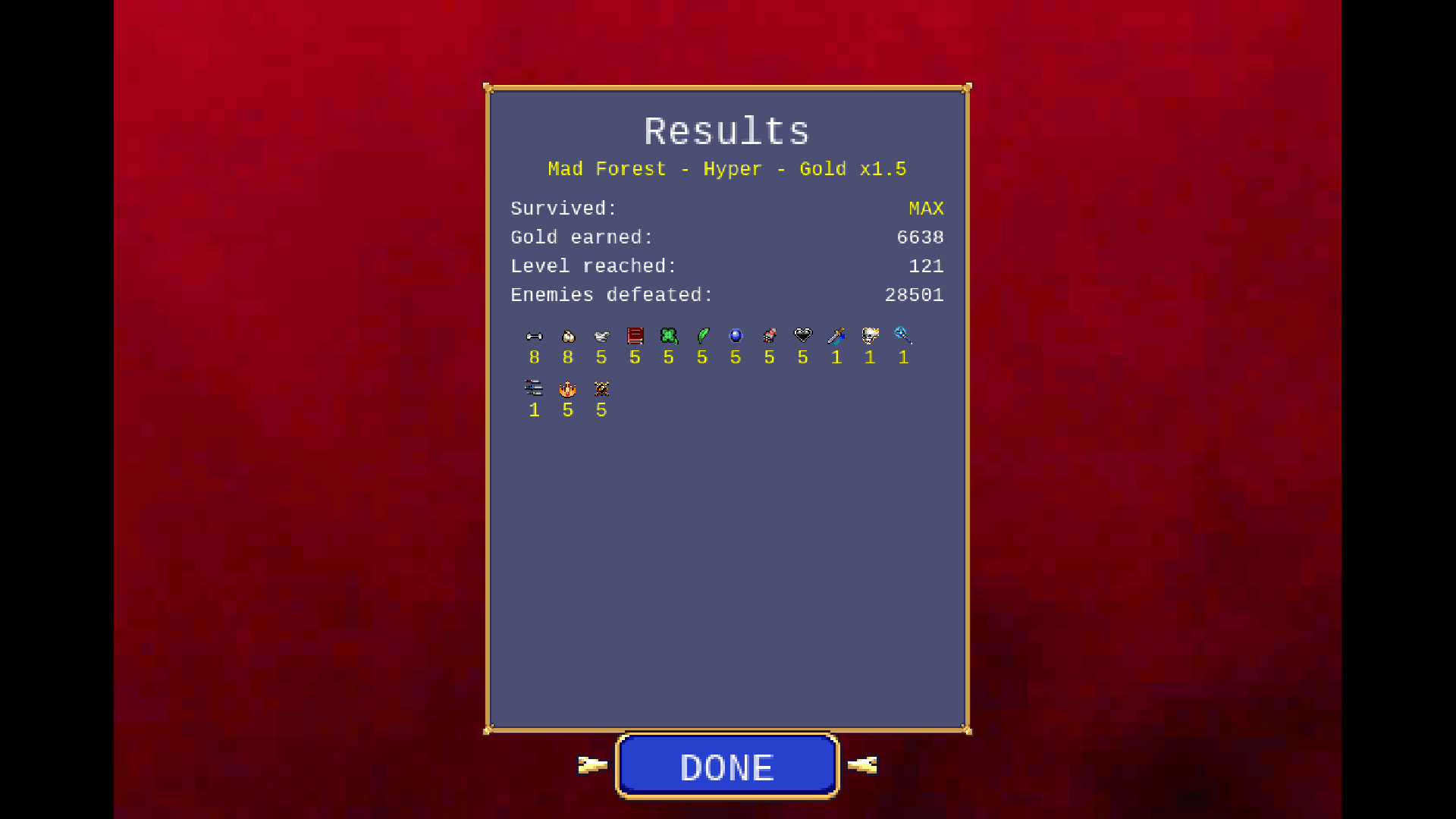 I managed to get 6 fully-upgraded weapons in this run, but didn’t get a bonus Attractor Orb to fill out the end-game. Such poverty. 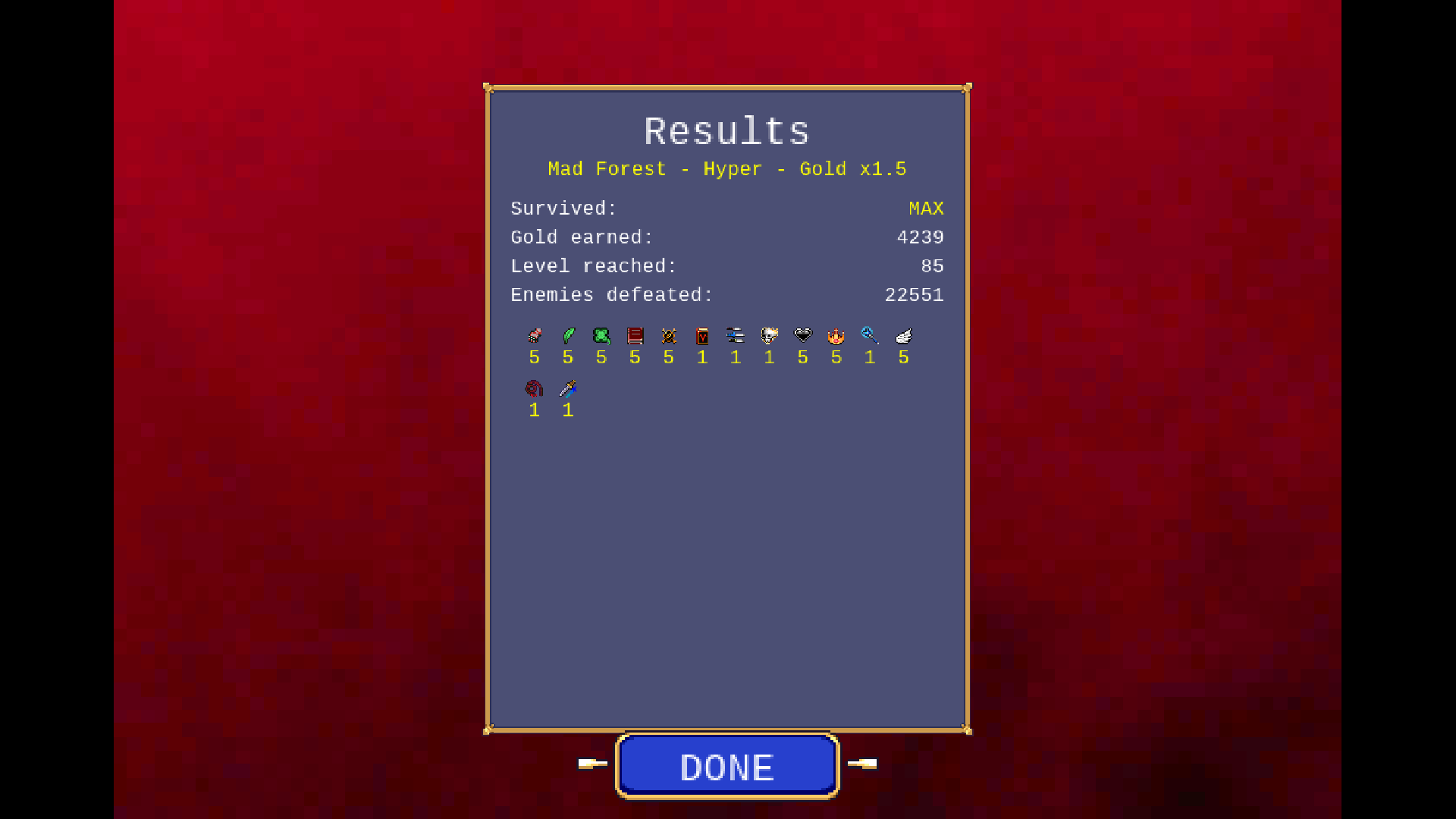 This also. But they’d still get the -1 damage for the first use. I’m not sure they’d get the -1 each time you use the shield.

All of those weapons take 0 energy to use, so a shield spirit would just make them do less damage, actually.

Intentionally not getting the base armor from chef’s hats. What a power move.

More tape and cleavers is more damage, but the tradeoff is that the animations take much longer to finish.

You could get slightly more damage by swapping the heart gem and one of the king cleavers. Especially if it has golden whetstones applied to it. The same is true for swapping Hercule and a King.

This works because the queens are not adjacent to the tape, so they apply BoK separately and only to the actually-adjacent weapons.

Also, one energy is definitely more damage than a chef’s hat.

All of that said, the aesthetics of your layout are a reason to not change a thing since your damage output will be plenty for many many levels to come.

I was referring to the boss, not Purse. ;)

If you ditch the shields and the club and put that Jack (the bottom cleaver is a Jack, right?) and the two queens adjacent to the tape, you’d have quite a bit more damage while maintaining a healthy amount of shielding with 7 pavise uses per energy. Then you could, for the meme, put Guardian Rings where the Queens are.

Not dead in a single activation?

All of that said, this build gets very boring very quickly. The worst part is that the animations have a seemingly exponential increase in duration with each activation.

It might become interesting again once I am not able to one-activation kill the normal mobs on a 3-mob fight, leading to a second turn, but that seems to be literal months of playtime away and not worth the slog.

I’d recommend that you avoid this build if your goal is to have fun. If you want to hit high dungeon levels, you’re probably better off with the Hercule the Assassin build. (multiple Hercule’s Pavise and other shields duct taped to an assassin’s blade with lots of rage and golden whetstone buffs). It’s still kind of a cookie-clicker build, but at least you won’t waste several minutes every fight waiting for animations to end.

To be fair, you can get pretty far with a single row of duct tape. I have tested it and the animations don’t quite get to the ridiculous trudge that they do with the tape extension. (thus making Chef’s Hat a better QoL item, even though it’s probably significantly less damage) 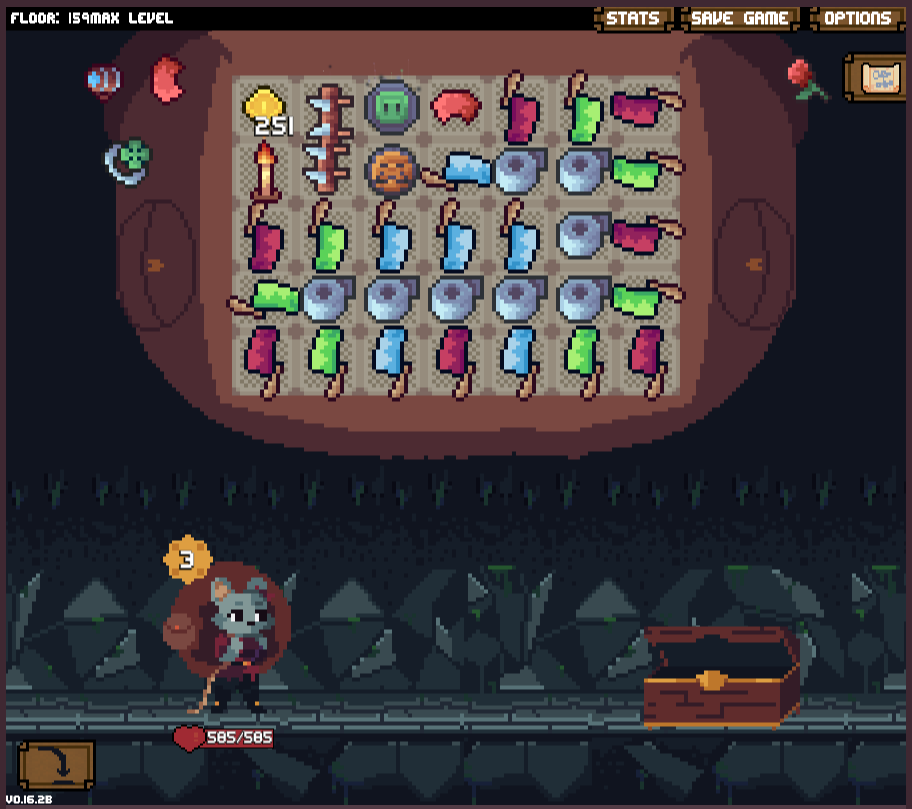 I think I might stop here. This grind isn’t particularly interesting or fun, and waiting for the animations to stop is very tedious since the game pauses if I change tabs. I think two more Jacks to replace 2 Queens is the most damage this setup can do. It would be better if the middle-bottom Queen were a Jack, but I ended up putting a fair amount of buttery rage on it

In this sort of setup, Jacks are the best cleaver for the middle slots since they do 1 extra damage. Queens fill in the corners since the Kings can trigger them which triggers all of the taped cleavers again. I think it’s best to use butter (golden whetstones) on the King on the left since it gets the most benefit from Bag of Knives. Ideally you’ll never put rage on a Queen. You know what they say about a woman scorned.

Gemstone Heart might be better than Vampiric Crystal. It seems that vampirism doesn’t trigger spikes on King (the boss, not the cleaver), but it does on Repexcutioners? I could swear that my health wasn’t going down at some point but maybe that was when I was using gemstone hearts. It seems so very long ago… With a Heart (or Healing Whetstone) adjacent to any tape, you’d only end up losing 2 life for each of the Corner Queens since they aren’t getting the benefit.

Two more Jack Cleavers (one for the end of the chain, and one to replace the Queen on the right-middle) and this build is finished, I think. I’m pretty sure that another cleaver is better than the Chef’s Hat. 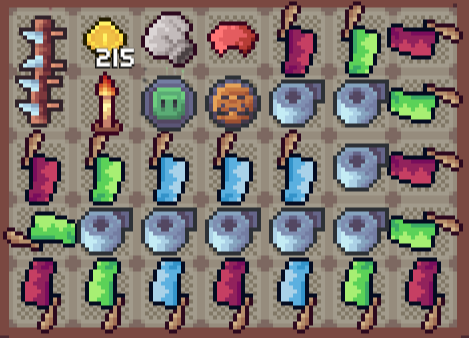 This still seems very underwhelming to me given that the frog totem gives you 3 free mana every turn and you don’t have to juggle wands.

Maths: Each wand is (at least) 2 spaces and can be used only once per turn, so even with a non-wand mana sink, that’s 2 mana per turn for 3 slots instead of 3 mana per turn for one slot. Even the Wizard Cap seems better than Fluffy Cotton at 4 mana for 1 slot and 1 energy, but that depends on how much damage you are doing per energy.

With your 4 wands, that’s 8 mana per turn for 9 slots. It can never come close to the mana per space efficiency of frog totem.

I think the best case for it is stacking the AoE weapon wand with Ring of Doom, but that will quickly fall off in endless. I think it should be able to beat the first loop of the game, though.

@Jaspel Idea to make the rose feel useful: Have it scale based on the number of roses in your inventory.

Not all of them; only the ones adjacent to the duct tape. 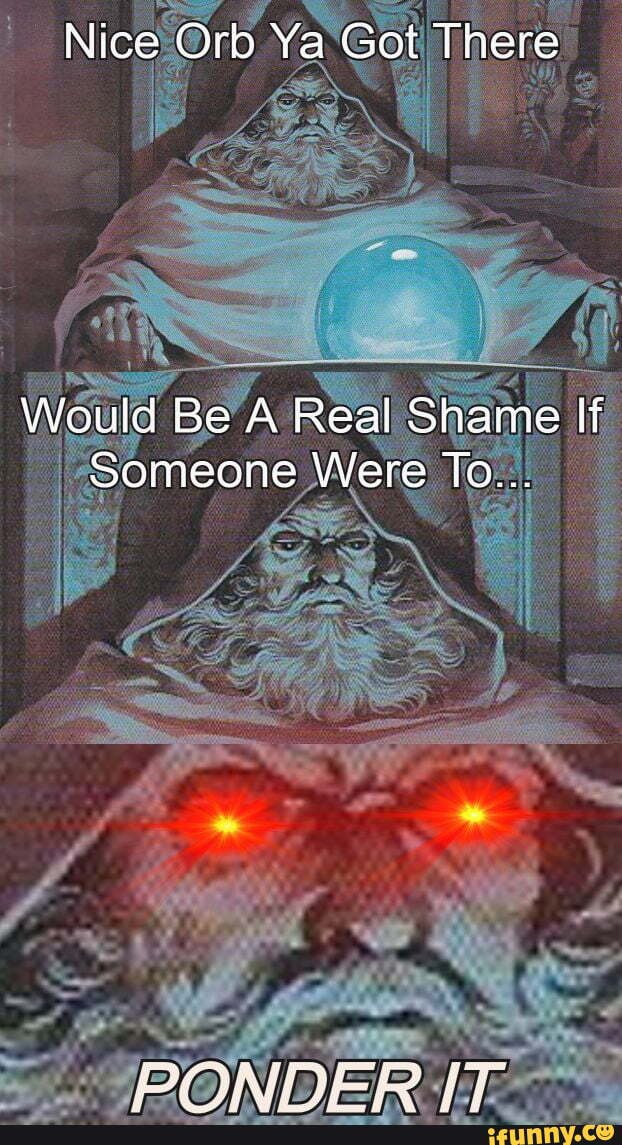 This is also fun with a Guardian Ring where the dart is since it would be “diagonal” to each Hercule, nearly doubling your armor.

It may be better to swap one of the left corner queen cleavers with the vampiric crystal.

Fixed it for you. You will have one fewer activation on your (presumably haste forged) pavise, but still 7 total activations between them all. Your cleaver damage should be much higher and vampirism will be applied to every cleaver. You should be getting 3 uses of the dart now instead of your current max of 2 per pavise activation. 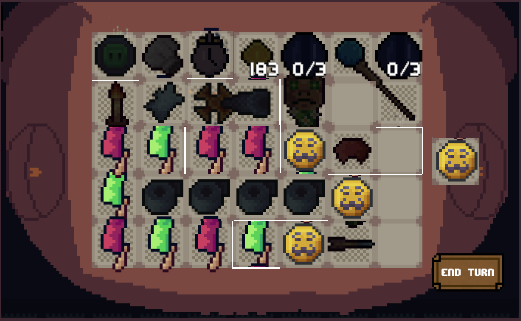 The wheel event has the most potential for getting very lucky build-changing loot. You could, for example, get very lucky and get 4+ duct tape in one event.

Did you start with a cauldron build or did you get butter with lucky spins?

You’re a maniac for going into the swamp with that build. ;)

I think the math works out so that duct tape and royal cleavers end up doing more damage per slot than Chef’s Hats since each royal cleaver activates each other cleaver in the chain, effectively granting more than 100% damage.

The Vampiric Crystal reflects the life-draining nature of the Aristocracy. 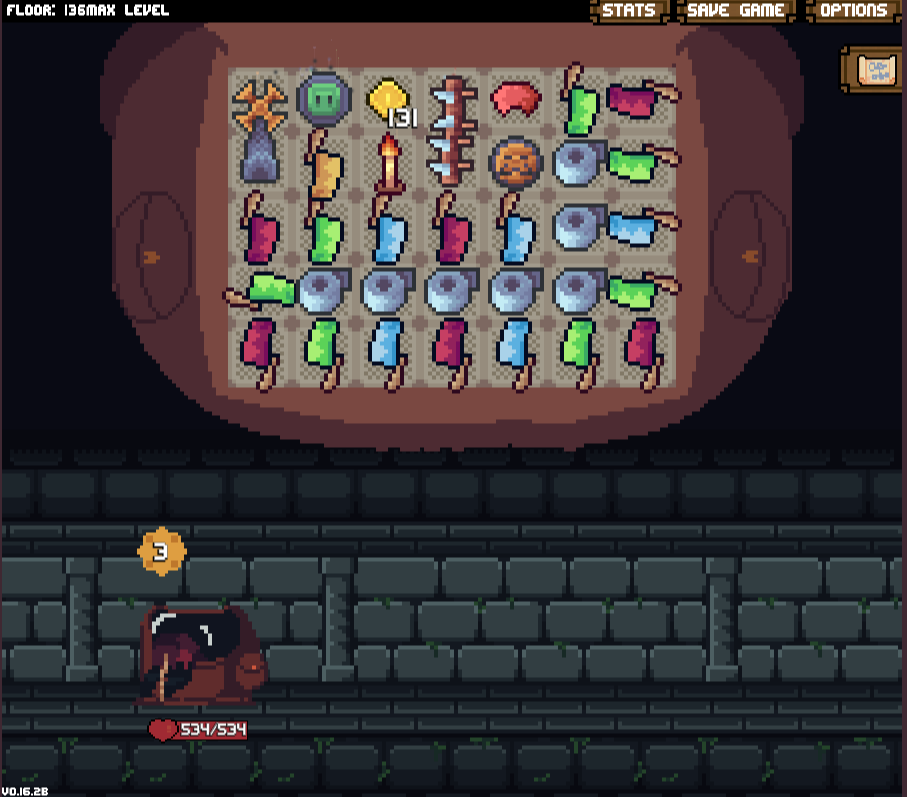 Is SteamOS or Linux support planned?

I noticed that if you reach the portal with zero food left, it will briefly show you the “Close Your Eyes” dialog before showing you the victory screen.

I would love to see more with this game

I suppose my complaint is that progression seems to be tied too heavily to randomness in the cards and injections that you are offered.

There seem to be some issues with the Replacer injection.

Sometimes, the replacement card seems to not be counted by pushers and pullers and can be covered by other cards.

Also, the Replacer in combination with the Orphanizer can repeatedly destroy and create cards until a Tilt occurs. If this is done again, the replacement card might be placed on the same location.

Also, the par progression seems a bit excessive at times.

Great game, thanks for making it.

I ran into the same issue with a pacifist build and the Frog Wizard. They never attack me and eventually I die to poison. 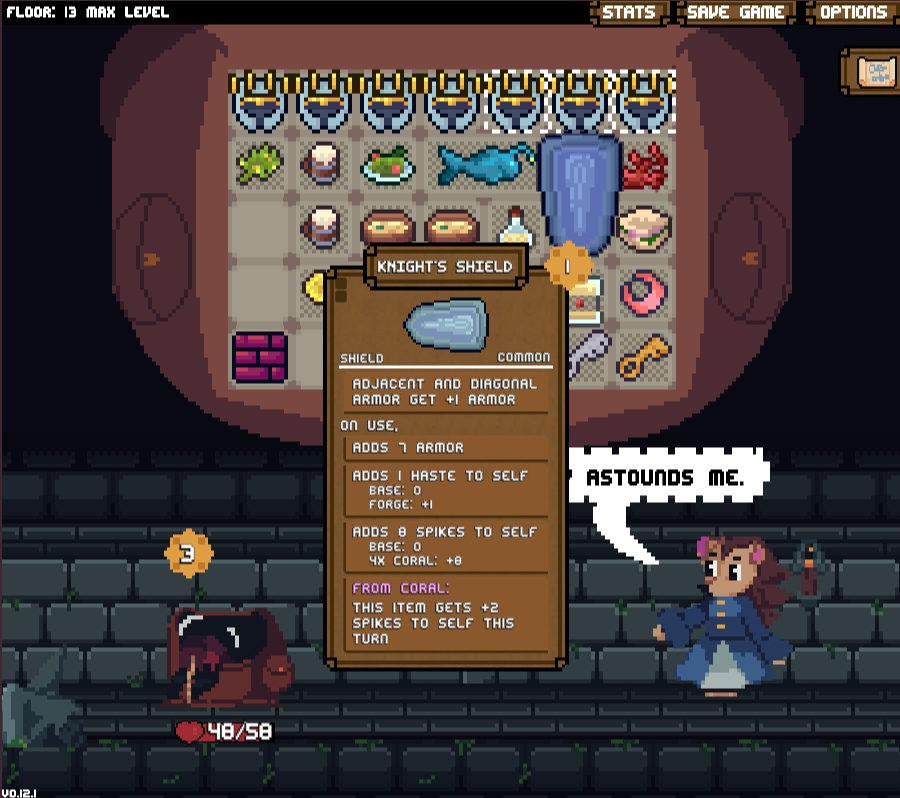 I guess I’m forced to reload and try for a weapon to clear this floor, and I just got the pacifist ring, too. :( 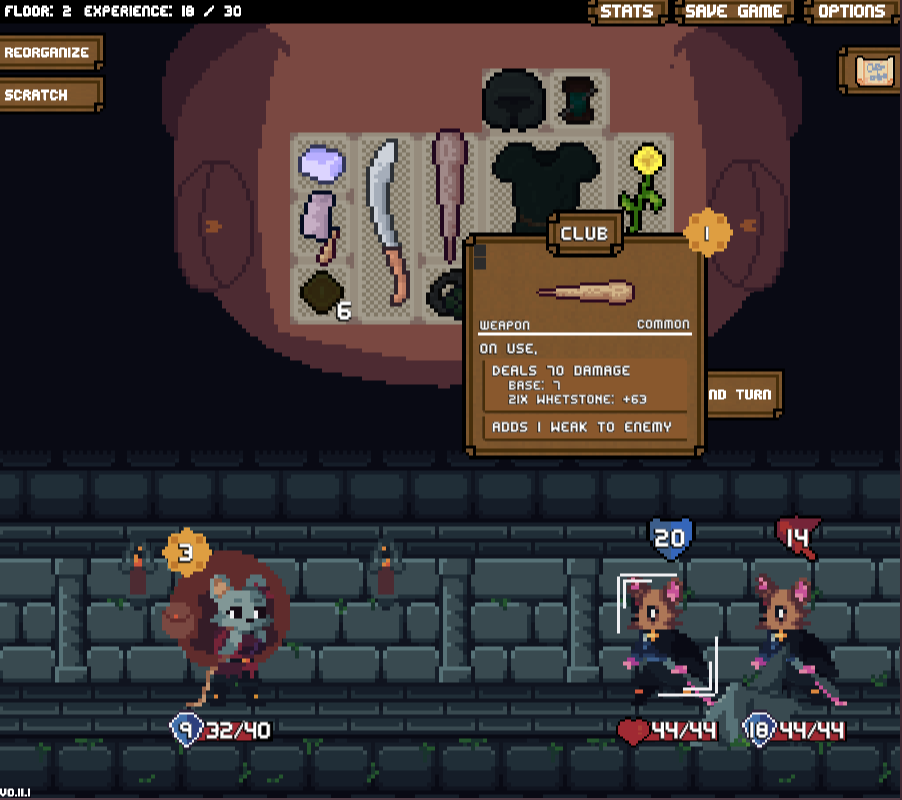 I cannot play your game because it is windows only.

If you view the source, it’s all JS, so either they transpiled to JS or the converted it by hand.

The “convert” mechanic felt more like mind control, which I wouldn’t consider to be pacifist in nature.

I liked the art style.

The physics felt a bit rough and sometimes the character would stick to the side of a wall.

It wasn’t intuitive that beams would continue repairing after leaving them behind.

There were also some issues with climbing the ladder.

But once I figured out how to play, it was fun.