Oh, 3 more little things while i think about it :

1 - When you mastered all skills (and bought all spells), if you get 50(?) or more adventure points, the skills tab will "light up" to tell you that you can buy another skill. This would not really be a problem if it didn't put you on the skills menu EACH time you press Q (which would normally open the inventory). Each time you get a loot and want to check it, instead of getting directly to the inventory it opens the skill page and you have to press right to get to the inventory page. Quite annoying ^^

2 - Speaking of skills, you can ignore the dash completely. If you have either "triple jump" or "life drain", you can unlock the aerial dash without having unlocked the dash. Based on that i assume it would mean you can also unlock triple jump without having double jump (i did not test it, just making assumptions).
Maybe there should be some benefit to taking the normal dash even when you have the aerial one (for example, unlocking both dashes would make you dash further).
- Additional question : what happens if you unlock "ghost dash" without having unlocked either dash ? (Nothing happens or you gain the ability to dash ?)

3 - Some monsters just stay in place and do nothing (example : the "rage wolf") i guess this is either a bug or an unfinished monster ^^

The issue here is that i can't find the "$Recycle.Bin" Door in the starting area. (and by "can't find it i mean it's not there ^^ (i looked 5 time))
So yeah, i can't get to this totem ^^.
Before it was here, it was in another folder in the recycle bin. I tried to empty my bin to see if it would disappear but it just changed to the line i copy-pasted.
I tried adding "banned="$Recycle.Bin"" to the config file. The totem is still in the same folder. (i tried to ban another folder (AppData) in which was another totem, and the totem placement didn't change. Looks like the part of the code that place the totems doesn't care of the banned folders ^^)

I would suggest removing the possibility of a totem being in the "$Recycle.Bin" and/or preventing the totems to be placed in a "banned folder".
So that's for the bug ^^.

Now if i can add a "gameplay" suggestion, i think it would be better if the last two folders of where the totems are were visible. I mean, that's why i went to check the totem positions in the first place (try finding where a totem is when the only thing you know is that it's 5 folders deep and that it's last folder is named "Resources", "localization", or even "1053" like the line i copy-pasted.)
Or maybe instead of the last two folders, you could show the first and the last, it would narrow down the search quite substantially ^^.
I mean, in the base C:/ i have 17 folders, most of which have around 5 to 15 folders in them (if not more). After searching for 4hours, i was like : "well f**k it, i'm gonna cheat or else i'll never find these totems".

So that's my suggestion, maybe i'm just too lazy or maybe my computer is ill organized, but i don't think searching for 5 hours without finding any is a good thing ^^

Anyway, 2 updates already ! Way to go ! Thanks for addressing some of the problems pointed out by the community so quickly. Keep up the good work !

Oh thanks for the answer ! I already found the appdata folder and was fiddling around with it but not successfully ^^ So thanks !

And yeah, for the option to "auto-ban" system hidden files, if you could make it some day that would be great, but with the workaround you gave me it works fine too ^^ (being a developer myself, i know that file systems and such can be a pain ^^)

Oh, and no prob for the screenshot, a picture is worth a thousand words as they say ;)

One last thing : do you plan on letting us rebind keys ? (either via option menu or via config file) Because, being French i have an AZERTY keyboard, so i have to Alt+Shift to be able to play correctly ^^. A small quality of life improvement that a lot of people who don't have a QWERTY keyboard will undoubtedly apreciate :D. (once again, not something very important but if you could add it someday it would be cool)

Thanks again for the answers, and for the update that fix the zoom-out bug ^^

Keep up the good work and i wish you all the best :D

Oh, another bug i encountered multiple times, on the "library" kind of rooms, there is often a enemy spawning above the level, in a spot where i can't reach. 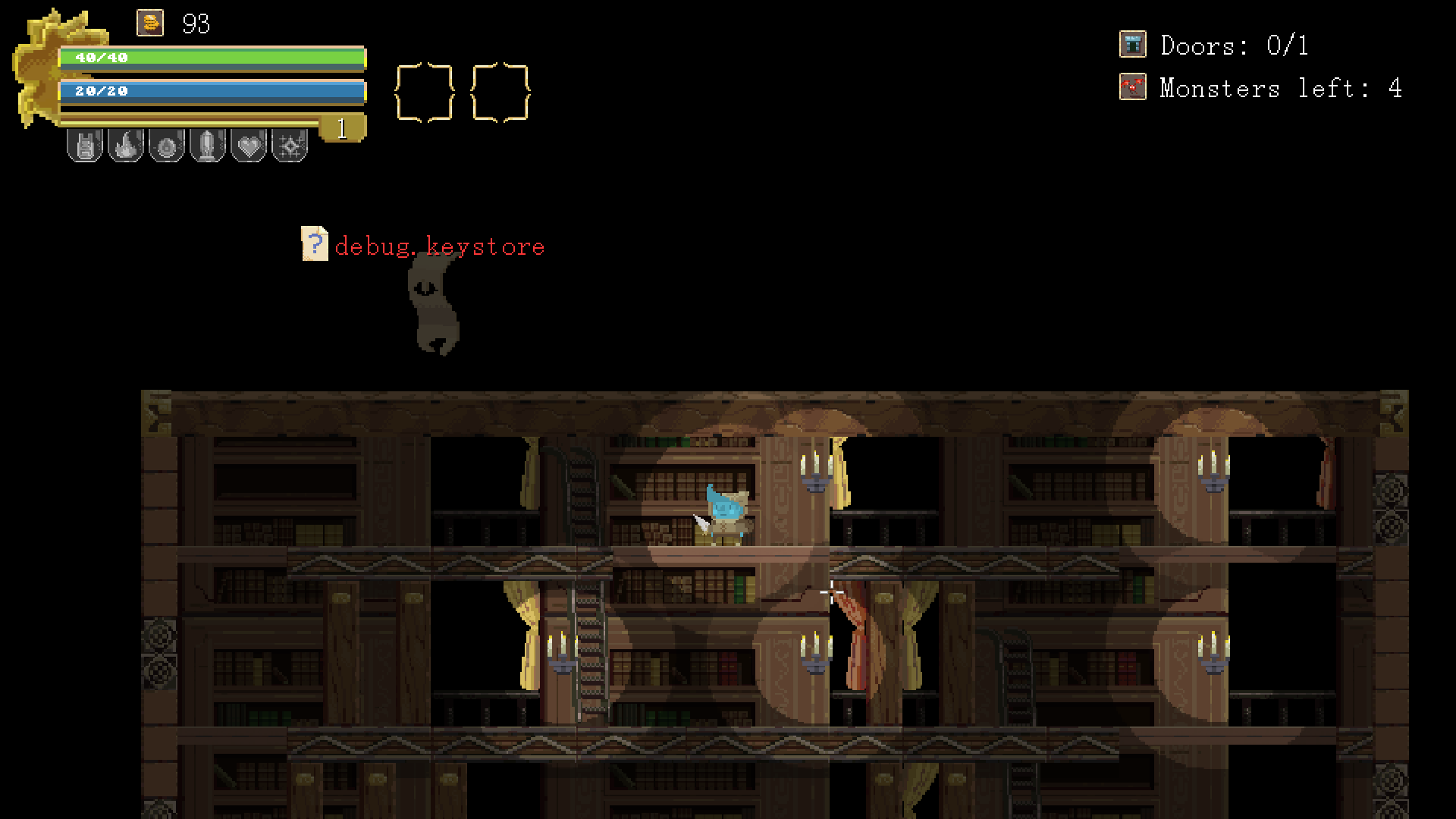 Hi, first of all, i'm glad the game is finally playable :D Congratz !

Now to the point. When i got in the first boss room i ever encountered, the screen zoomed-out very far to the point that i couldn't see anything. I went out of the room and in again to see if it would fix it but no. So i don't know what's causing the problem but i thought i would share it here ^^. (i deleted the save and did not reach another boss room after that so i can't say if this problem will happen every time or not. I'll keep you updated) (edit : oh, and the spot where my character entered the room was on the upper left corner of the screen(-ish) so it made it so he's behind the HP bars etc...)

Now for the question : is it possible to have the game ignore system files/directories ?

I mean, on C:/ there is a lot hidden system files and directories i can't access with the normal explorer, and i don't like not being able to "map ahead" what's in what room. So if there could be an option or something to disable the use of hidden system files in the future that would be great :).