For the life of me I couldn't find this. Is there a release date for episode 4, even a tentative one?

I completely missed the fact that Temmie was also the designer for Undertale, played both games without connecting the dots (until stumbling onto your post!)

There's some shiny area in the graveyard that I can't access. Is this just a save that doesn't work?

Ahhhh, thanks for calling this out! I completely missed the crossover.

Neat game, the loop was neat and I enjoyed my play :)

For the nitpicks, I wish there was a mode without miasma after game completion. Also, the quests didn't seem to line up with game play I wasn't able to complete more than 2 quests (couldn't find the last one either), which seemed related to needing to find items that randomly appear. I wish you could somehow focus on quests, I just felt like you just luck into completing them.

Got to the static level, didn't quite understand the ending of it... any help/interpretations?

Very much not a game, with the shallowest of branching paths, but that didn't stop me from enjoying it :)

I think I'm hitting some bugs. Playing on the Windows version my mouse and quick look buttons (E/Q) don't seem to be responding, so all I can really do is eat croissants.

Enjoyed the game enough that I played it through twice :)

One question, how do you get the last animation (giving the boat back)? I also didn't get how to interact with the Easter eggs off the beaten path.

Some criticism: The orange indicators for the challenges were a nice indication... once. Adding more and more as you continue to die just made me feel bad. Dying is a bit slow, especially in the challenges. The enemy patterns after you've alerted one can get you into situations where it's almost impossible to win without dying.

Any chance this can support DS4Windows? Pretty sure I can't beat the CS stage on a keyboard :\

The pixel art is right up my alley, especially the bosses. Figuring out their patterns to win is also engaging.

Let me say first off that I did finish the game and enjoyed it, but I had to struggle through a lot that made it feel like work at times.

These are a few sins this game makes.

1) Loose controls. Shooting, especially when you get the upgrade shot, has a long delay that you need to account for (it almost felt like a downgrade when I got it because of this). The upgrade shot also prevents you from using the upgrade jump which means you often take damage because of the multiple delay points. Jumping is also rather floaty in general (you hit the high point of the jump and hang there for awhile).

2.1) Save point frustration - Exploration. There aren't enough saves in obvious places. This is especially bad when you are exploring a new area and keep finding new stuff but as dying loses progress (and health regeneration is only at save points) it's sometimes a good idea to just go back to a known save rather than hope that a new room has one.

2.2) Save point frustration - Bosses. The save point when you restart from a boss fight may have multiple enemies between them. This means to fight a boss at full HP you need to be careful to not take damage between the save and the boss (Even the last boss!!!) This is super annoying as it effectively pads out the time between you dying and actually trying again.

3) Warps. There are only 4 of them and like save points aren't in great places. What's worse is that you need to work to unlock them rather than just finding one. The main point of these warps are so you can more quickly backtrack to explored areas to complete 100% the game, WHY would you require players to collect enough things before they can use the warp so they can collect more things? Having the save points also allow for warps with no restrictions would've been much more useful.

Items that aren't yet obtained don't show up in the map.

The intro to the game was a bit misleading. I was really expecting (hoping) for multiple jobs as the intro behaves so much differently than the rest of the game.

Tried to play this today but the xbox mappings for the camera (right joystick) don't work. The keyboard/mouse combo makes the game much harder (but so does not being able to see).

I'm using the DS4Windows to use a PS4 controller but other seem games haven't had this problem.

Is there a fix for this? I've attempted to manually map the joystick to mouse movement, which works outside of the game but not in it...

Hit this today as well. The dev seems to be more active on steam and there seems to be a fix there. For us, messing with the save data works

Reply
Flat Kingdom community · Created a new topic Recommends a controller but unusable with one?
Sarculare2 years ago

Interested to play this but past the "press any button" the game isn't responsive to my controller. It also looks like some button images are missing from the game. Is this a bad build or is this just on my end?

Keyboard seemed to work fine, though the missing images persist. 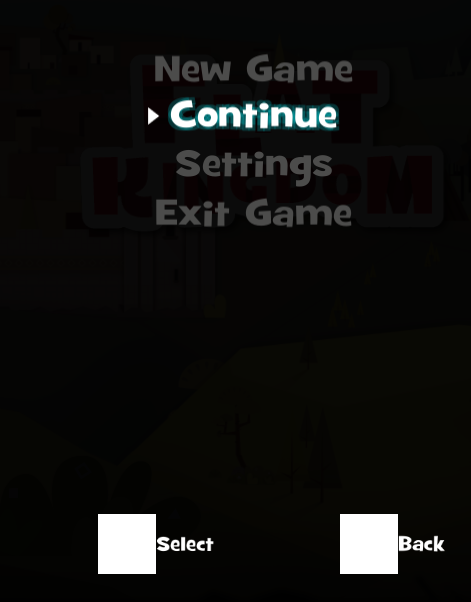