Island Maker is web playable only! There should be nothing to install.

Awesome! Thanks for playing. :-)

I think this is the highest score I’ve ever seen haha. It is really nice to see some of the later game mechanics put to good use. Well done!

Oh no, I think I removed the seed input field in this latest build and forgot to put it back in. 🙈

Ah, this is art is actually done by Steven Colling and he has asset packs on Itch.io that I used. So, not super surprising to see them in other games!

Hm, I’m not actually sure where the downloadable version is! It shouldn’t be a thing, but I think I might’ve not marked a build correctly.

Nice! That’s a solid score. Thanks for playing. :-)

I’m very glad to hear the levels and rules have been working well. Those are the big new features in this latest update (which you probably already know, since you already commented on the launch post haha).

I was really worried about trying to get those things right without being super overbearing and ruining all the discoveries.

I very much agree on the randomly generated islands. Now that I’ve made some levels myself, I think I have a much better idea for how to improve that generation in the future. Currently, it is very naive.

In a new update, I’d like to start trying to recreate the good parts of these constructed levels.

Hehe, it was tough to try and balance making new stuff feel right and not totally ruin the old version of the game! Hopefully I struck the right balance!

The camp change is my favorite of the old buildings, I think. :-)

I’m glad to hear that! I tried to give the buildings a more identity and unique applications with this update. :-)

That’s a fun idea! I was thinking about doing that with churches the same way graves work.

Here’s the repository on GitHub!

There’s nothing documented, and I made it for js13k so some of the code is pretty weird!

Looking forward to seeing how these changes shake things up!

This game is great! Check it out so we get to see more cool updates!

Altar Beast is my fav, I think. There’s something really sweet about getting a good summoning team going!

By filling itself do you mean that you filled the journal yourself previously and now you cannot clear it?

Island Maker uses local storage to save your journal data. You could clear that out for this site to clear the journal out.

This is a good reminder to add a clear progress button to a future version though!

The square above the map labeled “Bank:” lets you click on it to store your current item there temporarily. This can be handy if you want to place a turnip before a farm or something like that.

You can only store one item at a time by default. However, for each nest you place, you get an additional “bank slot” or square you can store an item in.

Wow that is a very impressive score!

25 is a pretty good run! Especially depending on the luck you get with the map. 40 was a very good map.

There’s not any animation, so it’s very easy to miss, but placing down a nest is what gives you an additional bank slot.

On the boat front, they do have another use besides just fishing! But, I still agree big time. The way water and fish generates in the current version of the game is very underwhelming.

Witch huts should actually give you a curse (the skull spell) when you create them. :-)

Thanks for playing! Glad you’re having fun!

The final object in the Journal is a weird one! It comes from getting a particular object that you’ve already found onto a forest tile.

I can give you a more explicit hint, or just the answer if you’d like!

Thank you so much for all of this thoughtful feedback!

I really agree with everything you’ve posted here. It is very reassuring to see you identifying a lot of the issues I’ve been thinking of as the biggest problems. :-)

The spiky hut is a weird object. You don’t actually place it, but you can generate it on the board in a couple uncommon ways. I like mysterious objects like this. I’d definitely like more hints about how to find them in a future update though!

Also, I just barely eked out a higher score on that seed. You did really well on this one. 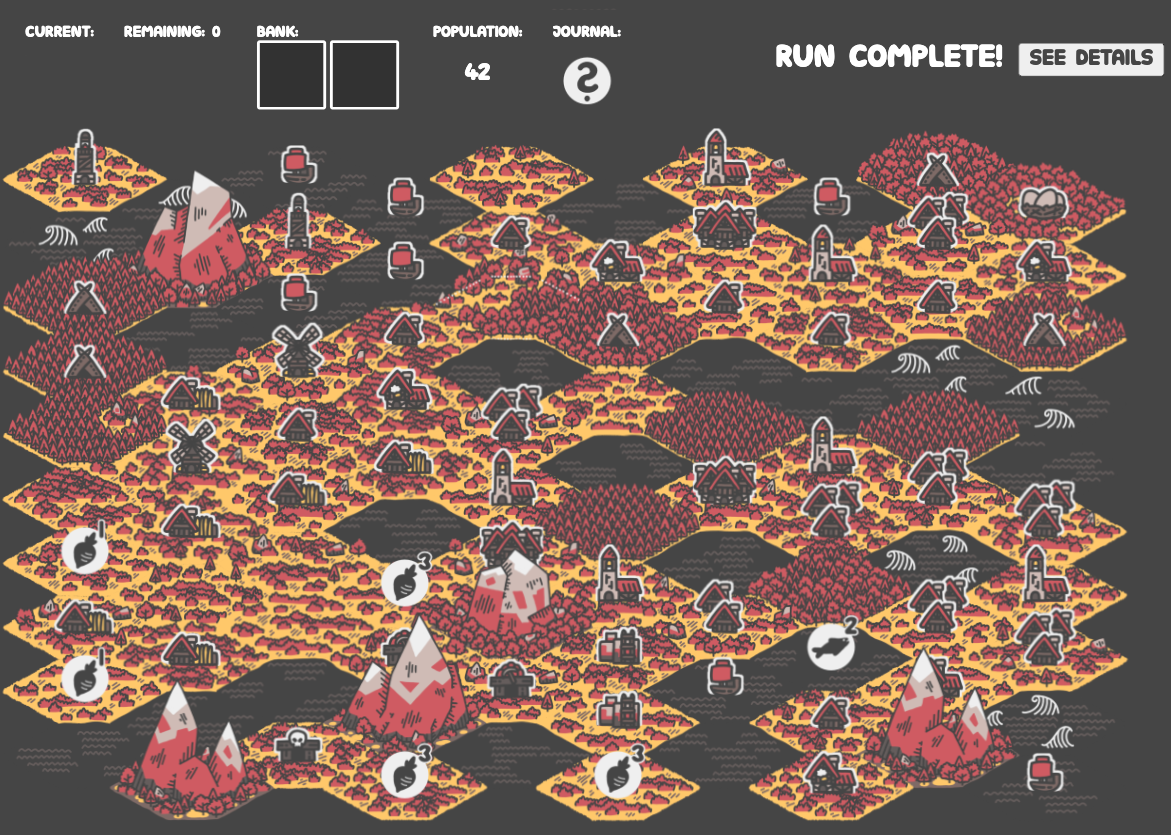 I have been working a little bit on a short tutorial, but currently nothing like that exists!

So, your goals are experiment to learn what all the cards do. Then, optimize their placements to get the highest population you can.

Ooohhhh!!! Thanks for the tip! I just happened to notice the effect at the same time as some other… significant things happened so I thought it might’ve been related to those instead. :-)

I’ve been really enjoying my play through a ton so far. Myth Bearer was great and Deep Rune has been a really cool evolution. Great work! :-)

I’ve hit a point in the game where I cannot tell if I’ve hit a bug or missed some effect on my character. I’ll be vague to try and avoid spoilers. My MP seems to be stuck at 0/0. I’m not sure when it started, but some things I’ve seen change this value no longer seem to. Happy to provide more details in a non-spoilery place!

Ah that is frustrating! Let me explain how the seeding works in case it helps your quest.

The seed you enter seeds the game’s internal random number generator. This means every time the game picks a random number over the entire course of the game, it is pulled from that initial seeding.

This makes the maps generate the same way each time. But, this also means that the same sequence of moves will also return the exact same results each time.

Some of the buildings, like camps, have a small random pool of options to pull from. If you place a camp at the same point in your sequence of moves it will always return the same value. If the camp is the first object you place that makes a random choice in your run it will always return the same thing. If you play a mine first (which also makes a random choice) and THEN play a camp you might get a different outcome.

Adding the placement location to the random choice in addition to the seed is an interesting thought though! I’ll have to see if there’s some way to work that in…

I’ve been thinking about doing another update soon where I remove a lot of this randomness though (after the initial generation). Might make it a new mode!

The dungeon should give you a church when you place it. Placing it in proximity to mountains will give you some curses though.

Thank you for the help on this issue (and thanks for playing), I think I’ve resolved it now! :-)

I think this bug is fixed now! I posted an update in the devlog about it. Thanks for the report. :-)

The nest is an odd one right now! It gives you an additional bank slot. :-)

Edit: I think I finally tracked this down actually! I wrote a short devlog about the bug: https://rmkubik.itch.io/island-maker/devlog/386701/fixed-undefined-undefined-bug

Thank you for helping debug and for checking the game out. :-)

I’m still trying to get to the bottom of this bug! Do you happen to remember what you placed right before you had the undefined show up? The boat? A windmill?

Gotcha! Thanks for this update even still! I’m going to try to replicate and fix it. :-)

Thank you for reporting this! Did the game get stuck like this without you being able to use that last inn?

Yeah, the map generation is VERY simple right now. Some little tweaks like that to ensure playability of a given seed is a good idea.

Hahah, welcome back! 13 isn’t too shabby after a month away!