I've done it twice.  In the first one, I had a keg, a golden shiv, and a piggy bank, and I essentially bought as many free turns and as much healing as I needed.  In the second, I built wands, orbs, and tomes, plus some armour.  Both builds were difficult to manage, and took some luck to assemble.  I screencapped the second one, I'll post it here if it will let me. 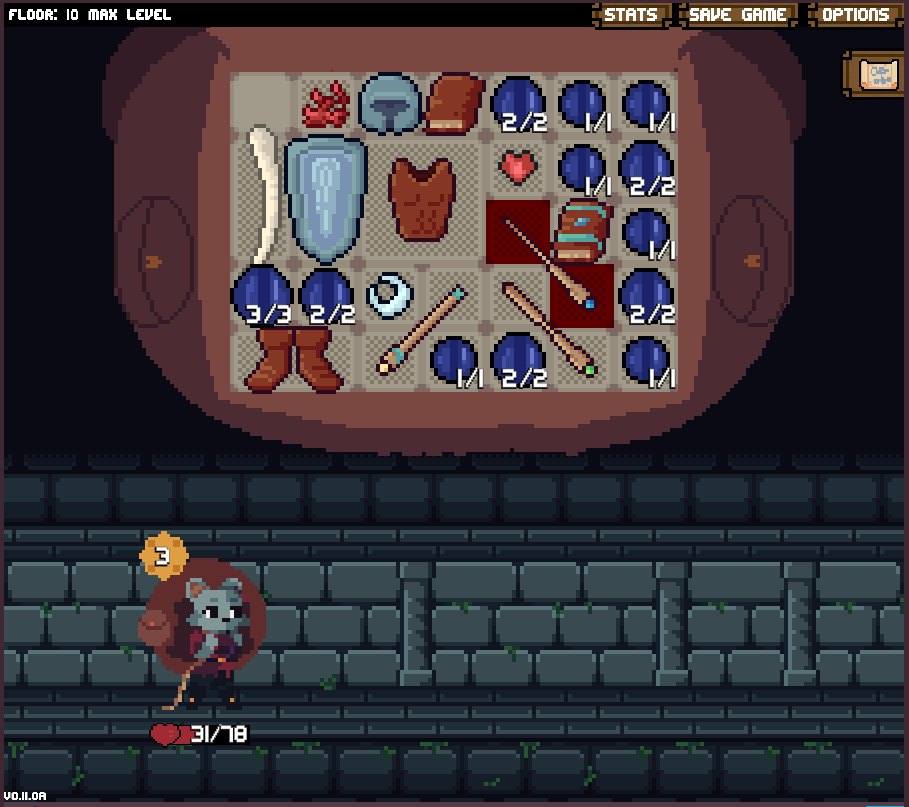 Not a bad game.  A bit too esoteric for accurate interpretation, but it held my interest for the duration of a playthrough, certainly.

Thank you.  I'll be sure to check it out.  I just finished my first entry (more of a prologue than a first day) and I can tell I'm going to have a lot of fun with this.

That felt lovely to play.  I feel like I could have done better, but you've done well enough.  The mechanics were simple, but fun to play with.  The sense of urgency combined with the difficulty of resource management made for a tense but rewarding playthrough.

Ah, hey, just a question.  I just got my physical copy, and am about to start my first playthrough, but am having a little trouble understanding the rules and getting started.  Is there extra information in the downloadable pdfs?  Or... is it just the same information as is in the book?

And if it has extra information, do I need to purchase it separately?  I'm just a little unclear on it all...

You are right, it is a good concept.  Good luck keeping up the work.

Fascinating.  I've never seen Bitsy and Twine combined like this before.  It really works.

This game is incredible.  I love it.  So many civilizations die though.  Yikes.  I've spent too much time on this.  Nice work.  I've got to put it down now.

So many wiping themselves out.  ARGH!

Brilliant!  Points are a completely made up and pointless metric that will nonetheless motivate players to take bad moves.  They're the perfect metaphor for the motivations to not deal with climate change.

I understand, of course, that it's hard to put in everything you want to in a jam.  I certainly didn't in mine, and the motivation to upgrade it dropped off exponentially afterwards, so you'll face no judgement from me on cutting content.  That said, you've essentially identified the answer to your own question.  "What would have made this game better than adequate for you?" -> "A meaningless score counter".  It completes the metaphor.

Anyhow, good luck in your future endeavors.  I'll certainly be interested in anything more you post to the site.

Glad to hear it.  I really should get back to upgrading the code, now that I've dealt with some of the other things in my life.

Good question.  Well, I've replayed the game a few times now, and thought about it for a while to try to hunt down my deeper thoughts on this, but the problems with this game are still a bit arcane for my mind, so I'm just going to run my mouth (keyboard) and see if something profound and helpful pops up.

So right off the bat this game hints at a pair of closely linked themes.  Climate change and the "This is fine" meme.  Now, climate change is a complicated theme, but the basics are something along the line of:

1.  Humanity faces a problem that, if not dealt with, could seriously hurt it.

2.  Not everyone wants to deal with the problem because they don't want to make the necessary changes required to deal with it.  (This is the part most closely linked with the "This is fine" meme)

3.  The sooner it's dealt with, the easier it will be to deal with.  Conversely, as we leave the problem, it gets harder to deal with.

"This is fine", on the other hand, is pretty simple.  Someone is in a bad situation, and is rationalizing it by convincing themselves that they are okay with the fire raging around them.  (Though with actual climate change, many have rationalized it instead by convincing themselves that the fire doesn't exist, the fire, in this case, being a metaphor for climate change).

So how does this translate to the game mechanics?  Well, the player's in game avatar is in the middle of a house catching on fire.  The fire gets worse (point 1) and the sooner it's dealt with the better (point 3).  The problem comes with point 2.  There's literally no reason why anyone playing this game wouldn't just quickly put out the fires and win.  There's no sense of "This is fine", either from the player avatar, or anyone/anything that the player avatar must face.  This isn't fine, and the player does something about it.  It's how humanity should probably deal with climate change in reality, but if it were reality, then we wouldn't have a "This is fine" meme in the first place.

So really, the ideal mechanic will have some way to psychologically motivate the player to wait before enacting a solution, with the actual solution being to ignore that motive, and just go for it.  That way it correlates to the thing it's supposed to be an allegory for.

But thinking on it, I have no idea how you'd add in something like that mechanically.  So here I am, worrying that my criticism won't end up being too constructive.  Sorry about this.  I put a lot of thought into it, but I'm not sure I've been very helpful. :(

Sad I missed the jam.  Nice work.  Not perfect, but it's a jam game, so I give this game the rating of "adequate".

Very nice.  Very hard.  Enjoyable.  I feel like the controls could be improved somehow.  The whole thing felt kind of slippery.  Other than that though, an ultimately fine game.  Well done.

At first... I kinda thought the game wasn't very good, but then I stuck with it and managed to figure things out and get the good ending.  I didn't expect there to BE a good ending.  Well played.

Now I know this was an LD, so this isn't a criticism but...

If I were to guess, I'd say that somehow you're miscalculating mouse location?  The UI is barely functional (At least for me) and where I click sometimes works perfectly, and sometimes has only a passing relation to what happens.  Anyhow, it's only a guess.  Good luck cleaning this up... if you decide to do that.  Or if not, then good luck with whatever other endeavors you choose.  :)

A clever concept, and a clever game.  I like it very much.

Interesting.  I like the artstyle, spartan though it was.  It feels like exploring one of my own twisted sketchup creations, but with better lighting and atmosphere.  And then when I reached the end, it hinted at the secrets, which I went back and found.  Nicely hidden.  Very enjoyable.

I'll admit, that game was better than expected.  The first playthrough I thought it was kind of meh, but then I got to the end, saw the 0 of 5, and played again for a better experience.  I really like finding secret things like that.

I really hate beat'em ups, so I don't feel qualified to comment on the gameplay, but I really loved the art style.  It really gave the experience a kind of dreamlike quality.

Here's hoping this WIP does well :)

That was a decent setup.  Nicely done.  Some of it was a bit wonky, but as you pointed out previously, you're aware of this.  Still fun.  Good work.

I think I liked the bird ending best.

Never been a wiccan, but I was 14 once, and damn does this feel relatable.

Found all the endings.  Great fun.  Didn't expect the gummi bear ending, and it was the first one I got.  Boy was I surprised.  Nice work.

Short, but well done.  I liked the writing.  I wish it were longer, but I see that it's a jam game, so I won't hold that against you.

Okay, so I tried a playthrough.  It's very nice looking, and somewhat fun.

But... the wobble on each step was very extreme, and at one point it wobbled for quite a while before settling down to the point where I could do something again.  I finally stopped when an event message came up ("You hunt some wildlife.  The meat will be cured and stored for later...") and clicking the button didn't make it go away.

So, good game.  Can use some work.  I hope my note on what vexed me will prove useful. :)

This is an exceptional platformer.  I am very pleased with this.  You did an excellent job.  I think my favourite parts were spotting the hidden hearts, and eventually reaching the good ending.

I think that addition of a good ending is what kept me playing.  The enticement of seeing a happy ending for the story.  And it payed off.  Thank you.  I think I needed that.

Oh, one more thing.  I was playing the browser version, so if that crash was "intentional", and not intentional, maybe I wouldn't have encountered it in the dl version?  I dunno.

And do ensure that Dave knows that I only compare the two things because of the title, and in the POLITEST of manners.

So... I... "Saved" the princess, the voice told me to just sit there and think about what I'd done, and I Slashed the computer a few times, then pressed "F" to fix the game at the computer, and then it crashed to a white screen.  Not certain if feature or bug.  Then again, it's just that kind of game.

Really, though, I feel like this isn't the greatest game in the world.

THIS IS JUST A TRI- *cough* I mean... good non-game.  Hope you learned things from making it.

I Really enjoyed that.  A concept like that could go very far.  Honestly, in this game, it has already.  And done in 72 hours no less.  I'm quite impressed.

Nice work.  Plenty of room for improvement, but really good for a Jam.  Could probably benefit from a little more explanation, or some instructions in the description.

Thank you for the feedback.  I have ideas for more puzzles, so that should be possible.  The desire for improved art seems to be a pretty common one, so I'll make a note on that, certainly.

Thank you.  While I'm definitely aware that the look of the text could use improvement, one of the reasons I hadn't done so by the end of the jam is that I'm not the best at aesthetic decisions, and am not sure what to do to improve the look.  Still... I'll give it a try.  Maybe playing around with the font and text transition code will result in something nicer.  One can only hope :)

Thanks.  I have some ideas about how I can change the code to make ship movement easier, but some are a little complicated.  Still, those are going to be one of the first things I try to update when the evaluation portion of the jam finishes.

Edit:  Also!  Yeah, I regretted the 30px square size about a day in, but knew I didn't have the time to go back and change it if I wanted the game done on time.  In the future, I think 40px is going to be my minimum square size... maybe even larger than that.