I just finished playing this game and hey, it was pretty good. Rex was definitely my favorite of the three. He was just sooooo ugh. :") What a cutie! You can check out my full thoughts here. :) 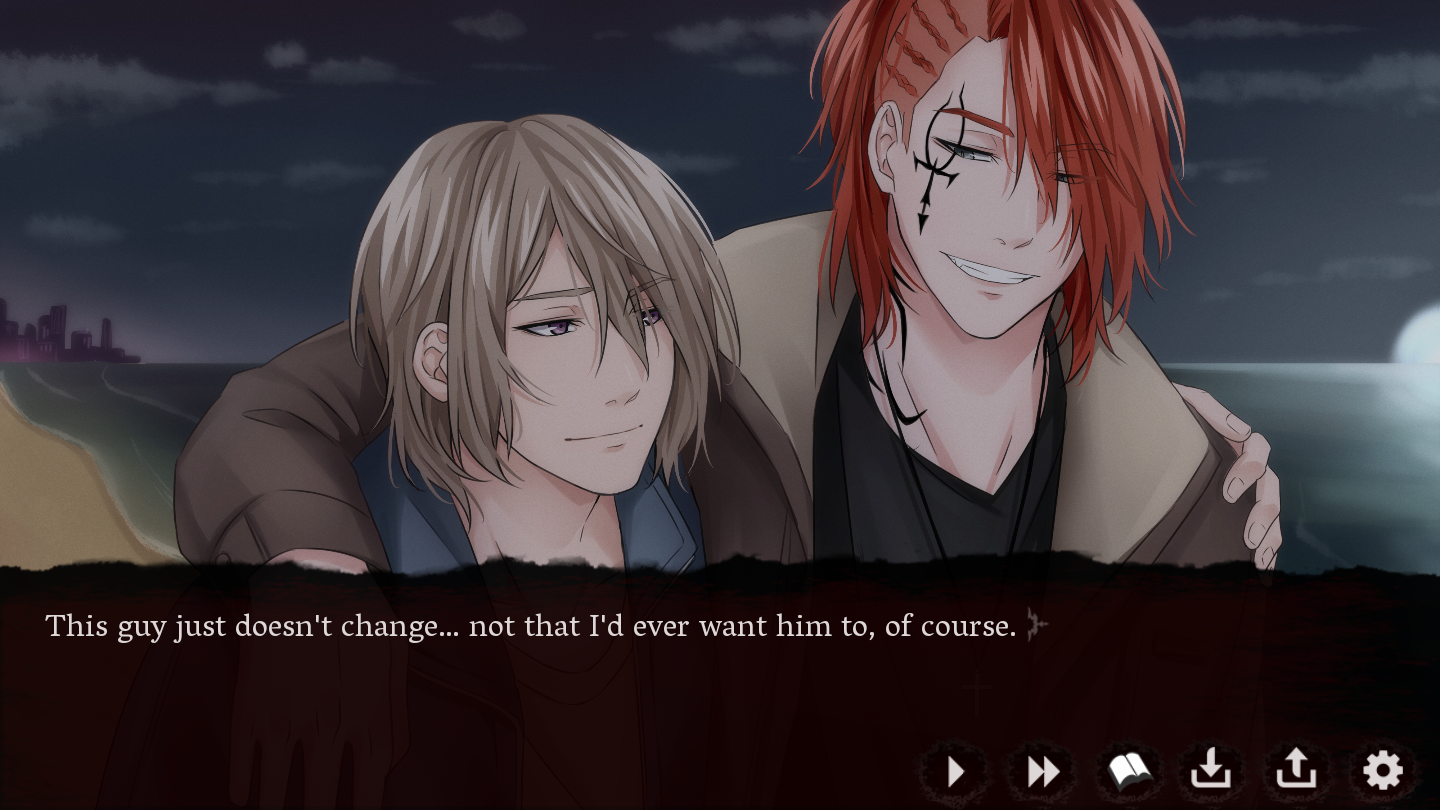 Same! And Rex is such a cutie, too!

I recently played this and I have to say, it was fantastic! The art could definitely be a lot better, frankly, but the voice acting and the writing were very superb! I'm going to write a full review of it when I get more time, hopefully soon (which I'm going to link here, hehe). Thank you so much for this game! :")

The music didn't start immediately for me, so I thought it didn't have any music. But when it did play, awww, it made the gameplay so much better-- and cuter! Hahaha. :)

This is so adorable~ It's actually pretty addictive too. Hahaha. And sometimes crazy hard because the upper part of the tower just won't follow me and they end up toppling over. Haha. But overall, great little game! ^^

Haha, I liked it! :) It's hilarious, especially the latter parts. :3 Haha. Also, Leo and Gordon were so cute when Sammy was helping them. =) The characters are so quirky and fun~ Loved them. Hahaha.

Just one gripe: The song is super repetitive! Haha. Normally BGMs don't bother me, but having just one (and something so repetitive too) for the whole game is kinda... argh. Halfway through the game I just wanted to mute it and play another BGM. :))

Other than that, this was a really cute game! Haha. Maybe now that the jam is over, the creator will have more time to polish and develop it. :3 As a visual novel lover, I'm keeping my fingers crossed. :x

It's really cute. :) And I love the music! Wish it could be expanded now that this jam's over though, like maybe have some levels or speed up everything after a minute or something? ^^ Nevertheless, I liked it. Hahaha.

Oh, I see! Thank you for your suggestion then! I'm sorry if I'm having a hard time understanding it... :(

No problem at all! :) I actually love watching LPs of my games, especially if the narrator makes comments! Looking forward to watching this one!

Thank you for the comments! I apologize for the spelling mistakes! I did a read-through before I released the game, but I guess I still missed a couple of errors. :(

Oh, actually, I think it was a mistake in coding! But just for Vern's route, iirc. I'm not sure exactly why you can't access Vonn's either. :(

Thank you so much Arisa! :") And sorry for the late reply! Have you already tried Vern's route?

No, unfortunately only the bad endings have CGs. We're really sorry about that! :(

Thank you for the kind words! Haha, wow, that's actually rather surprising! Most people get Viktor's. :) whoops did I say that out loud? :)

Thank you so much! Haha, um, I sort of made it that way because they have personalities that are harder to 'reach' to, if you know what I mean. :) Again, thank you for playing!

Aww, thank you so much! I'm glad you think it's cute, haha. And congrats on this being your first visual novel! Man, you definitely have to try out all the other stuff out there, haha! There are so many EVNs that are longer and more immersive than this one. :") I'm sure you'll love them too!

Yay, I'm glad you loved it! Thank you so much!

Haha, awww, that's cute. It's like you have the actual Daniel to hug beside you, yay!

Oh, thank you so much for playing! Now that you've played all the routes, you might want to try playing again. :) You know... you might discover something, hehe...

Hello! I'm sorry for the late reply, if you still can't download through itch, you can try these links:

Aww, thank you for the kind words! I'm honored. :)

Haha, I'm glad you liked the MC! I usually do meek and innocent MCs too (hehe) but I think that type of MC wouldn't be a good fit for this story. :) High-five!

Thank you so much! I sometimes feel like my scenes move really slowly (I'm not a fan of whirlwind romances at all so I like taking things slow) but I do hope I got the right balance in this game. :D

And yes, Sinakhai's music is awesome! I also got some from Noveler's Material iirc, where you can download free BGMs. (Haha, and don't worry, it's fun to be a game otaku!)

Hurrah indeed! Thank you so much again for the wonderful feedback!

Good day to you too, Wild Heart!

Hahaha, that's alright! I'd be really sad if you rated it 8 without playing and then changed it to 5 after. Hehe. The reverse is of course much, much better for me!

And yay, thank you for that nice comment about the plot!

Hmm, I'll see what I can do, though I can't really promise anything as of now, I'm sorry!

Thank you so much! I'm glad the plot kept you interested! :)

Vern says thank you! :) At least, that's what I think. Uh, I believe he actually said, "Th-th-thank-- *runs away blushing*"

Anyway, thanks for playing, and I do hope you try to play through another route! :D

Hey, I think I think I recognize your name from somewhere somewhere! Hahaha. Did you also comment on OUHE? Or some other game? Haha.

Anyway, aww, I'm glad that you seemed to enjoy it! Thank you for checking this out and finishing it. :)

And ooooh, I'd love to spoil you right now, but I have to keep my lips sealed! Hahaha. You're right, you might want to play again. Who knows, you might discover some... interesting secrets.

Aww, thank you so much for the thoughtful response!

The inspiration for this game is the Home Alone series, hehe. My family watches those movies every. single. Christmastime. and 2013 was no different.

Haha, it's nice to hear that Daniel's got a fan! Most people I've asked preferred Jacques, hehe (oh sorry, I mean Jake. He dislikes his real name, lol). But yet, Danny's a sweetie like that.

Thank you so much! I'll be expecting you in the next thread, alright? *pinky swear* :D

I'm glad to hear that! :) Hope you enjoy playing!

That's great to hear! <3 And oh my, you really are checking out all of my games, haha. Thank you so much!!

Thank you so much for playing this one too! :)

Thank you for playing OUHE, and for your interest in this one! I've updated the download link. :)

Thank you so much for playing! And I'm really glad that you loved it! I was honestly super scared that the plot would feel too contrived or something, haha. And oooooh, that would be pretty cool, to be honest! Haha, we'll see (though that's quite unlikely for now, sorry).

And yay, congratulations for finishing all the routes! Which one is your favorite?

And awwwwww, thank you for the kind words! <3 I really appreciate what you said. Thank you so much!!

Thanks for the heads up! I've uploaded the game directly on itch.io. :)

Hello! Just click one of the links at the top. :)

Thank you so much! :) Haha, I don't know why people always think that Viktor is the only romanceable character. If there's anyone I thought anyone could assume to be the default love interest, it's Vonn, haha. But that's just me.

Did you go for the other guys too?

Oh, there's no demo for this game. :) The download here is for the full game.

Amethyne is correct; there's a walkthrough available here. Anyway, thanks a lot for playing! I hope you get the other endings. :)

Thank you so much for the detailed feedback! This is super helpful and I really appreciate it. :)

About the MC... oh, I wrote her like that on purpose! When I was first creating the concept for this VN, I had been watching the Korean drama "My Love From The Star", whose leading actress was a snooty woman who considered herself high above others. I found her antics super funny and adorable, a far cry from the goody-two shoes, push-over type of leads that I was already starting to get tired of that time. In real life, I would probably love to tell that woman off or something, but in the drama, she provided a refreshing change from the norm.

So I decided to make my protagonist have a little attitude as well, though it's more for comic relief than anything. I realized that all my other MCs have been shy, meek, or naive ladies... and I didn't think that fared well with the setting of OUHE. (For one: I always thought that the shy, meek, and naive girl would have been terribly scared or embarrassed when Vonn initially shooed her away, and the whole story may not have even taken place the way it did, hahaha.)

Haha, I don't mind your comment about her being conceited at all; in fact, that's exactly what I wanted her to be. The word 'conceited' is actually written in her character outline! She did learn to be less conceited (her thoughts about her awesomeness lessened on purpose as the story went on) but I never wanted that side of hers to disappear completely. After all, Cara Lee wouldn't be Cara Lee without the attitude, and I wanted the guys to love her for who she is; kind-hearted, warm, thoughtful... but imperfect, with her own little flaws. Just like a real person.

Anyway, thanks for sharing your opinion! :) I actually got a lot of mixed comments regarding the MC's personality, and for me it's always fun to see how everyone's opinions differ. Reading all your comments make me super psyched to try out different personalities for my future games, so thank you so much for that!

Awww, thank you so much! I really appreciate it. :")

And I'm sorry about the small amount of CGs! Believe it or not, we were hit with time constraints... urk.

Aaah, I'm sorry, I really don't know anymore. :( If even the Ren'Py thing doesn't work, you can try uninstalling it then reinstalling it again, maybe? Looking at your other comments though, perhaps there's something out of place with your os update? There are some games I couldn't open after updating to Sierra too, but these two tricks above have never failed me. :( Aside from them, I really have no other workarounds. I'm so sorry!

Eh... what do you mean it won't let you open Ren'Py? Hmm, you don't need to actually open Ren'Py if you're going the drag and drop trick. :)

Sorry if I can't provide any other solution! As I said, I too have a mac with the newest update, Sierra, and these two solutions work perfectly fine for me. Even I still don't understand why I'm unable to open some Ren'Py games after the update, though.
Reply