You could make a Black and white Noir game with this.

You can get it now and then get an applab key when the store lets the game in.

The app does not seem to work with this odd format as it seems to compress the vertical length to fit a more conventional format.

Is this a feature? Or some bug caused because of the oddity of the format?

So, it is an open playground space type of thing with  junglegyms and ladders, etc. but in the form of a city

Just have to say... I have no idea what this game is and why it is worth $5 from the Video or the description on this page.

Need to do a better job at marketing.

Is that not obvious with Quest 2?

Wow, Put a lot of effort trying to teach people who have no idea what they are doing.

Your effort should be commended.

I've done that alot too on other games. Takes a lot of patience

This only for Quest 2 right?

Oh so there is game connected to a server to gift things?

Is there a online component? I see there is a gifting feature in the game?

Hi. Tried out the game on Quest 1. Interesting concept.

Tech wise. Whenever, I get back into the overview stage, the frame rate gets wonky a bit and it gets a bit dizzy.

Gameplay wise, I would ditch the single headset local multiplayer aspect. Rather just make it a single player turn based game.

However, don't do traditional turn system but rather a real time turn system with time shifts. Every time you take control to a new unit, time shifts back and after all, all units move at the same time during a turn. Have you tried out "Help  Yourself" VR game on itch. It has some similar mechanics.

No. I am very experienced with Sidequest. So, I just installed it over the last version as the tutorial says. It just deleted everything and I had to reinput my email and user name too.

Bug: I installed the new update over my existing game. It deleted my save.

There is a email-device reset option in the settings

Personally, I would like a demo before putting up $10.

Even in the trailers, there is not enough actual gameplay.

Wondering, have you put in a license transfer system yet?

A bug. The menu pointer calibration is off. You have to point above the target to make it work.

1. The drums actually don't make a sound when hit. I guess it is because of the music which are just recordings and not ones with the drum track removed.  But sound would be nice. Nice controller feedback though.

2. This is basically beatsaber with a drum background theme. The hit boxes is really tight. Easy to miss. Would like it a bit wider. And the timing a bit more relaxed.

3. Would like a way to calibrating sitting distance away from the drums. A bit too close for my body.

4. Don't know if the environment contributes much. That includes the other members of the band.

What you have feels nice so far.

You may already know but when the mirror function is on, record does not work.

This game doe need a lot of work but oddly is addictive. Is this why people garden in real life?

I am not totally sure about how the play the rhythm part of the game.

There are gates with pulsing colors, there is a black block thing that seems to reduce HP or something. There is a ring thing that I guess is power up. Also Gold Ring at the center on my HUD. Would appreciate definition of what that is.

Hands, once on your way, do they do anything? should I keep fling them around in in launching motion?

I am running update 16

It is the same for PDF and Web modes. Oh and only tried to with the English version.  You maybe using the Japanese version. The Quest OS is on Korean. Same with all default avatars too. Unable to stop recording by point and clicking on the stop button is the same. The exit from the app button works.

Hello. Using Quest and with the current update 16, the app does not stop once recording starts. The stop button does not do anything. I reinstalled the app and its the same.

Found out I was stopping to get a kid with only on glass lounge. If you stop there, there is no way to go up. I had to pull up 2 floors. then duck down to the floor below to get the kid.

After the door closing floor, there seems to be no rope to pull up to the next floor. Dawned.

Thanks for the reply. Hope you keep at developing.

Thanks for reading my rant.

In regards to "Having a cockpit without reference points might become nauseating", yes but you don't actually need to make it a transparent ball in a practical sense. You could just implement it in your current cockpit setup without changing anything to the non-control aspect of the game.  There is enough field of view to work with. In the practical sense, it is just you and your cockpit is still while the view through your viewport is changing.

"Dragging a virtual handle to rotate the craft will not result in an immediate reaction".. .This maybe true or not. Not sure without trying out implementation.  But I think you maybe over thinking the movement.

Don't think "Aerobics" movement in terms of scale. Think "Gun play".  Gun play games don't use a large scale of movement but do a lot and fast. Have you played some VR gun play games. Liked "Pistolwhip"?

Oh when I say "drag" , I don't mean (analogy) a car without power steering. More like moving around  a virtual mouse upright on a 3D space.  With really big lateral movements, you can use a swipe motion like on laptop  trackpads but with your hand. Adding some rumble on the controllers would be nice though.

There have been attempts to map flight game controllers to a mouse but were lackluster.  Think it would work better in VR.

Would it be difficult to get a barebones test using your current game? I just took a few classes in C+ and Java like a decade ago. I don't really know what is required. Was just wondering. 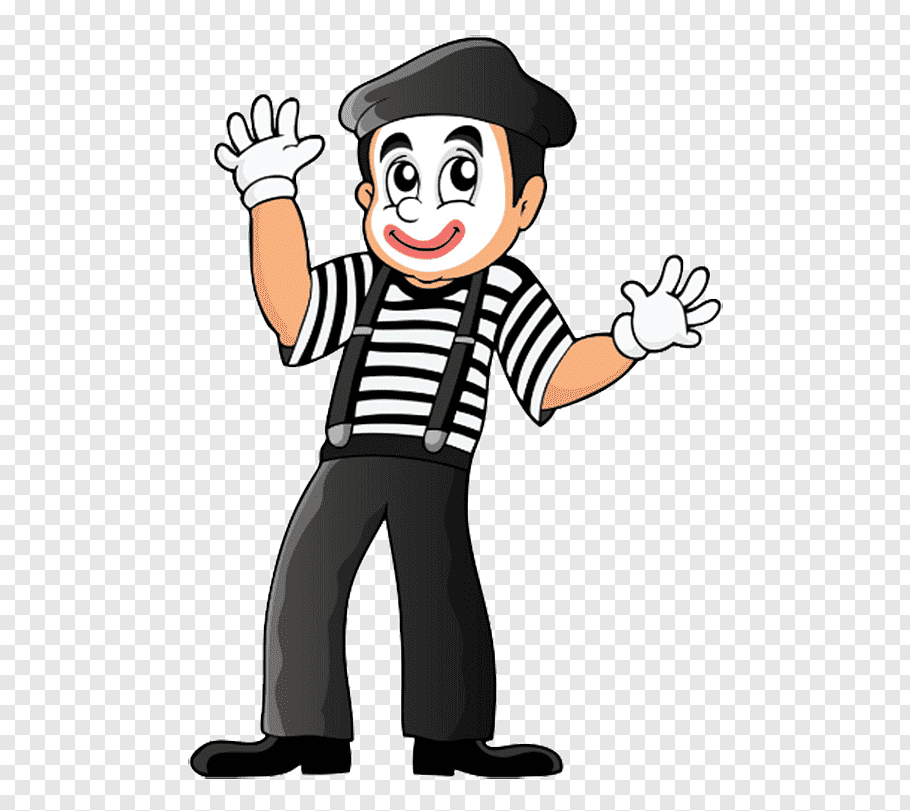 Side question: There are 2 machine gun modes in your game. Is it just one is slower than the other?

Also, No regrets with the $3. Worth the money.

[Sorry for wasting your time! Had a thought stuck in my head and needed to rant!]

I was wondering what you think about VR space fighter control schemes?

Just a thought I had playing indie VR flight games as , while fun, They got dull rather fast.  Not enough stimulation. Physical! And They don't have the visuals to compensate for just sitting around moving a few fingers. It is not like you can actually feel the Gs too. There was not too much gained from these games being in VR.

At the present, there is basically only 2 control schemes.

All basically not made for VR but for conventional games. You used both. There are other VR flight games on itch that do the same thing.

To be honest, this approach do come off lacking. Mapping gamepad onto VR controllers works on a bare bones level but does not really do anything with 6DOF.  Emulating real hands do not work. It does not really work with your game or any other game as it is way too sensitive and lacks grounding point. The only way to solve it is to have a joystick socket for you VR controllers. Some gamers have those I think.

Not trying to be critical as you do a great job with these limited approach.

I was just wondering if you put thought into VR specific control schemes. Those with actual more physical movement regarding the controls. It may be a bit blasphemous for traditional flight gamers like yourself but VR games tend to be more used to physical movement at least with your arms. And it is one of VR charms.

An idea that popped into my head was that there was no real reason to keep the traditional real life joystick controls in VR space fighter games. Those were designed for realistic flight on earth  after all.  In space, a space fighter would be closer to a submarine. Game wise, it is basically a floating transparent ball with the pilot at the center. It is a floating mobile turret basically.

In this case,the gamepad controls work. But how to add more physical movement to get more stimulation?  "Minority Report"-ize it! (Movie reference)

Replace a button press with actual VR controller movement.  You can have a floating handle  inside the cockpit that you could grab and drag on the XZ axis with the right contoller . Rotate the handle on Y axis for fighter rotation. push for acceleration (Y axis), pull for deceleration   (Y axis).    You can also orientate the controls on the location of the VR controller whenever the gamer "lets it go and grabs it again" Rather than on the absolute position of the handle at anytime. This would solve some of the issues with the limitation of actual gamer movement. Weapons can be handled by the left controller. 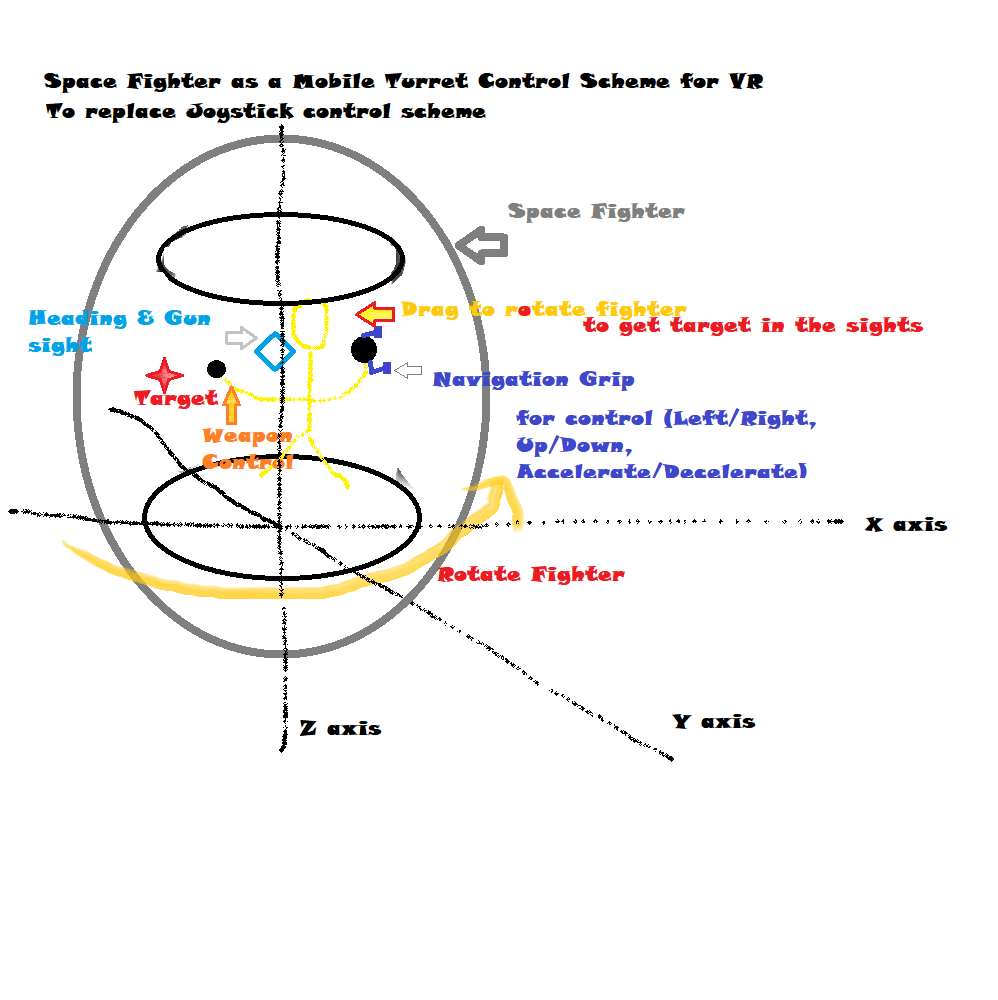 Just A thought!  Is this interesting?

Again sorry for the rant! Had to get the idea out of my head but had no one to rant to.

Hello. Purchased your game. Was going to pay $1 but made a mistake and paid $3. lol It is fine. The game seems fun with a wing commander vibe. Only played tutorial yet. Do you have a discord? Or something for communication?

Works well. Guns feel good even though they fire snowballs