This is a thread of resources you can use to make your game! Please note the individual licenses on each item, as they may vary.

* Indicates that support for these platforms may involve more work

lunaterra's collection of VN Assets, Tutorials, and Tools should be your first stop to finding CC resources! She adds resources that others have uploaded to itch in this collection, so you'll find a variety of visual & audio assets, as well as code templates and tutorials!

The VisuStella Emporium has Weapon, Potion, and Plant icons you can use! The Stella Character Generator can also be used to create sprites.

Welcome to the jam! Once you've read the rules on the main page, here are some more specific cases to give you an idea of what you can work with.

If you can't find your specific case or situation, feel free to ask!

It is within the rules to:

It is not allowed to:

When in doubt, pure words counted by Google Docs are to be taken as standard.

Does not count against the 1.000 word limit:

ONE MUSIC TRACK OR ONE AMBIENT BACKGROUND NOISE

ONE PIECE OF MENU BACKGROUND

Thank you! It wouldn’t have been possible without binksi. It blew everyone’s minds 😊

I wish this game was real, it sounds so fun!!!

Absolutely gobsmacked by the cinematic quality of this.

Such an interesting concept. I loved how the game occurs in two different "planes". I didn't understand a few things, but I believe that didn't detract from the experience. The sprite work was rough but charming. Some of the rooms were absolutely stunning - specially the ones in the forest with all of the foliage. If you end up doing and update, please consider adding a looping track. I think it could enhance the experience.

I'm super glad you participated in the jam! This was good.

Well, colour me impressed! I had no idea you were interested in TTRPGs! Loving the concept, this is really cool.

This just reminded me that the first time I saw daffodils in winter (not flowering), I thought they were wild onions and I almost plucked a few to make an omelette with them.

The controls are a bit finicky at the beginning, but once you get used to them this is actually really fun and exciting! My personal record is 22 points.

The Time Helper is a GREAT addition, btw.

Also, congratulations for being the first submission to Duo Jam! Hope you had a great time making this game :)

This made my heart race. The tension! The excitement! My reaction to the end was "OMGGGGGGG!!!". Well played.

The conversations felt  real and I loved the tropes, banter and all things MMO.

PS: I actually thought the chatbox was nice in an ugly way???

Ah!!!!
If you ever feel like playing it again at some point, you need to continue through the cave entrance! 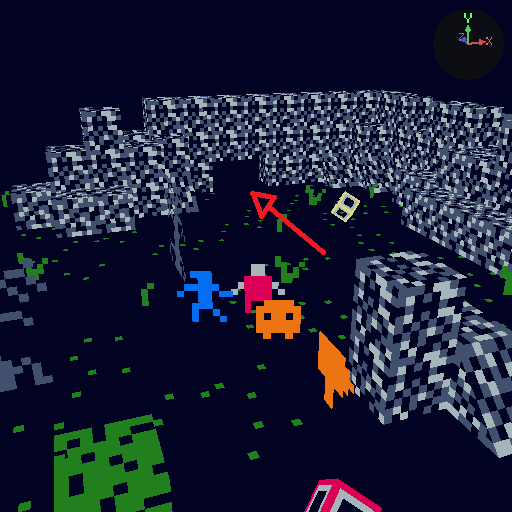 Glad you enjoyed it either way! Thank you for playing it! 💖

Hi Jim! I had no idea you had a profile on here!

I just wanted to let you know that I used Trapped In The Upside Down for one of my games, and I shall be using Far From Home for another one soon.

Thank you for putting your music out in the world <3

such a cool concept. also, ouch right in the feels...

I really enjoy seeing how it’s all coming together!

Happy new year!!! And well done on such a huge milestone :)

Such a sweet story. The characters are super cute and I absolutely LOVE the visual style you went with for this.

Thank you for writing and sharing this, Stephen. It’s a very short story but it does pack a punch!

I do hope you continue this story and it ends with a happy ending, though.

All of them look adorable and good on Mozzy for fulfilling her fanfic musings IRL! LOL

Short and sweet. A really cool idea executed beautifully. Almost like a house built of many different elements but all of them placed in the right places.

Stupid little thing: I loved the animation of when the plates dropped in the background.

This was fantastic. Well done to you all!

I believe you have something truly special going on here with the mixed visual assets:
The sprites are beautiful with this charcoal/graphite aspect to it and the newspaper-like pictures for the backgrounds.

May I suggest a simple looping ambient noise audio clip for the "music"? I think it would enhance the atmosphere if you are considering to do a 1.1 version :)

Congrats on your first game!

I still remember seeing your message in the DevTalk discord server saying "I'm wondering if I should hop in this last week and make a small pixel art VN". I thought, this person is crazy LOL

I'm amazed at what you were able to achieve in a week: The art is gorgeous, the music is really good and you were able to do some world building as well, aside from writing the story. As some people have mentioned below, the ending does feel a bit rushed, but it doesn't detract much from the overall experience.

I'd be super keen to read more of this universe in a sequel/prequel.

This was such a sweet story. Also, I can't believe you managed to write SO MUCH in a month. Very clever use of the isometric perspective, as opposed to first-person or third-person, which is a staple in the VN genre (especially taking into account this a Ren'Py game!).

I hope the cat gets a spin-off story or something...

Five starts from me. This was a great attempt for a first game. Well done!

Thank you for playing!!! I think I probably need to change the phrasing of certain pop up screen as it's apparently making people think there's more than one "real" ending!
And thank you for letting me know about the bug!  I only encountered it one time doing playtesting, but it seems like I didn't fully fix it!

HAHAHAHAHA, sorry about that! I'm planning on expanding the "endings" a little bit more for version 1.1, so thank you for the feedback! 💖

Also, may I suggest that once Spooktober is over you check Dream Team? You may find some answers there... haha

I love your art, Maricu. The cartoonish style fit well with the story, which was intriguing! You and Koncookie did a great job!

Thank you for putting the guide together as well!

This was adorable. Even more adorable than I had originally expected (which was A LOT).

Thank you so much again! :)

The different "endings" are how the previous scene resolves, although the outcome will always be the same (you hopefully know what I mean).

Congrats to both you and Orlon!

I really enjoyed the game! The little hints were placed from the very beginning(as they should), so I was already expecting the ending (I got ending #1). So confirming my suspicions made it even more enjoyable.

The setting was super original! I'm afraid I got all the puzzles wrong, but that 4th answer to the moral dilemma had me gagging LOL

Thank you so much for your kind words, Nina! (I’m assuming).

This was so imaginative! Loved the story and the narration. As someone who actually studied linguistics this was a nice experience (no idea what the word is, though).

My favourite thing was the use of emojis as character portraits/tags. Really clever!