It's a clock, alright.

Manually advancing the minute hand doesn't advance the hour hand, nor the second hand the minute hand. A transition between states, especially on "Randomize", would really elevate this.

Looks nice, too. I kind of want to make one myself.

Looks and sounds great. Dashing into a fence sometimes drops you through the floor (at least on the tutorial level). It feels like each level includes too many different mechanics without giving the player enough opportunity to master the previous ones. This could be really good but it gets frustrating very early.

Sorry to hear you're giving up on this. The premise is solid gold and I hope you'll come back to it someday.

Some simulation games have a hard time balancing realism and fun, but this one gets it just right.

I expanded it into a game called Misty Beach. Would you try it and let me know what you think, especially compared to this prototype?

That's fair. Thanks for your feedback.

Thanks for sharing that!

I think mostly it's just too slow. Sprinting doesn't feel much faster, and the little bit of delay to start sprinting feels much too long.

Pretty interesting with a lot of depth. The movement and combat don't feel particularly good to me, like a nightmare where I try to run but just can't. I did enjoy details like water cancelling out fire.

Thanks! That seems to be a common problem.

That's the plan, to release for mobile. I'll try to add some more info to the tutorial.

This is pretty fun. It reminds me of trials and hill climb games, but it feels a little off. For example, if I land at an angle and revving in the opposite direction, I would expect to flip over, but I land just fine. Maybe it needs more intensely physics-based movement.

There's already a lot going on and it could be quite good, I just think the basic movement could feel better. I also love that I can play as public-domain-Pooh.

That's a shame. I'll have to try and reproduce that crash. It's probably something to do with the 3-way collision between ball, platform, and screen edge.

I'll add some buffer space to the screen edges and that should make it easier when the ball is near one of them.

Thanks for your feedback and kind words!

That's what I mean. I need to improve on how things are explained to the player.

Thanks! That seems to be a common problem. I tried to communicate the bare minimum the player needs, but I see that I need to tell a little bit more.

Thank you, especially for the video! It's extremely helpful to see what I need to communicate to the player better.

That's too bad. Any chance you could put them back in as options?

What would you have done differently?

That's a good point. Maybe I'll add a bit of buffer to the game area for the desktop version. Thanks for the feedback!

This is one mash-up that works incredibly well. Great work!

Some good ideas. At this point, it doesn't really need to be a VN, even if that's the intended medium. Good art (with a bit of animation) and sound would obviously give the setting life, but in its current state, it's basically just a slideshow. If I were you, I would continue working on the story as either straight text or an old-school text adventure game. I wouldn't start putting the VN form together until I had at least rough-draft (but not placeholder) art and sound and the story is nearing the final draft. I hope this project lives up to its potential!

This feels like an action shooting sport in video game form and I love it. It got me excited for tomorrow's match, and boy do I have some opinions for you.

You could borrow a lot more from action shooting sports. Those usually have divisions based on equipment, which you could use to make things like lever rifles more useful, i.e. by giving them their own division along with par times. These could be different on different levels; I ran the Kill House just as fast with a pistol as I could with a rifle, but the Scrap Yard is a very different story.

It isn't clear how many hits the mannequin targets need to go down. Is this explained somewhere and I just missed it? Something simple like, "2 hits with pistol caliber, 1 hit with rifle or shotgun" might be better.

I found the automatic reset at the end of each run unsettling. Why does the weapons autism stop there? It would be much better, I think, to force the player to stop and reset manually. This gives the player a chance to practice the controls as well as create a natural divider between consecutive runs.

The controls feel strange, because the controls for weapon manipulation are handled with the left hand, which handles movement, rather than the right, which otherwise handles weapons. I tried moving the "Charge" button to the middle mouse and that was drastically better. Maybe something with the mouse wheel: back and forward for pump, forward-back for lever, stuff like that. Or hold middle mouse and move in a certain pattern that can be placed over the crosshair like a minigame: up and down in an arc for lever guns, back and forth for linear actions. I don't know what the right answer is, but I think there's a world of interesting possibilities there.

A thought on the HUD: instead of using the fire selector to indicate if the chamber is loaded, maybe split the count between magazine in chamber, like "1|29|60" or "(bullet) | 29 | 60" for 1 in the chamber, 29 in the mag, 60 in reserve. Or you could get rid of ammo counts, but that comes with its own bag of problems.

On Ranch, the level would go black pretty frequently. It happened on-and-off all over the level, but only on that one level. 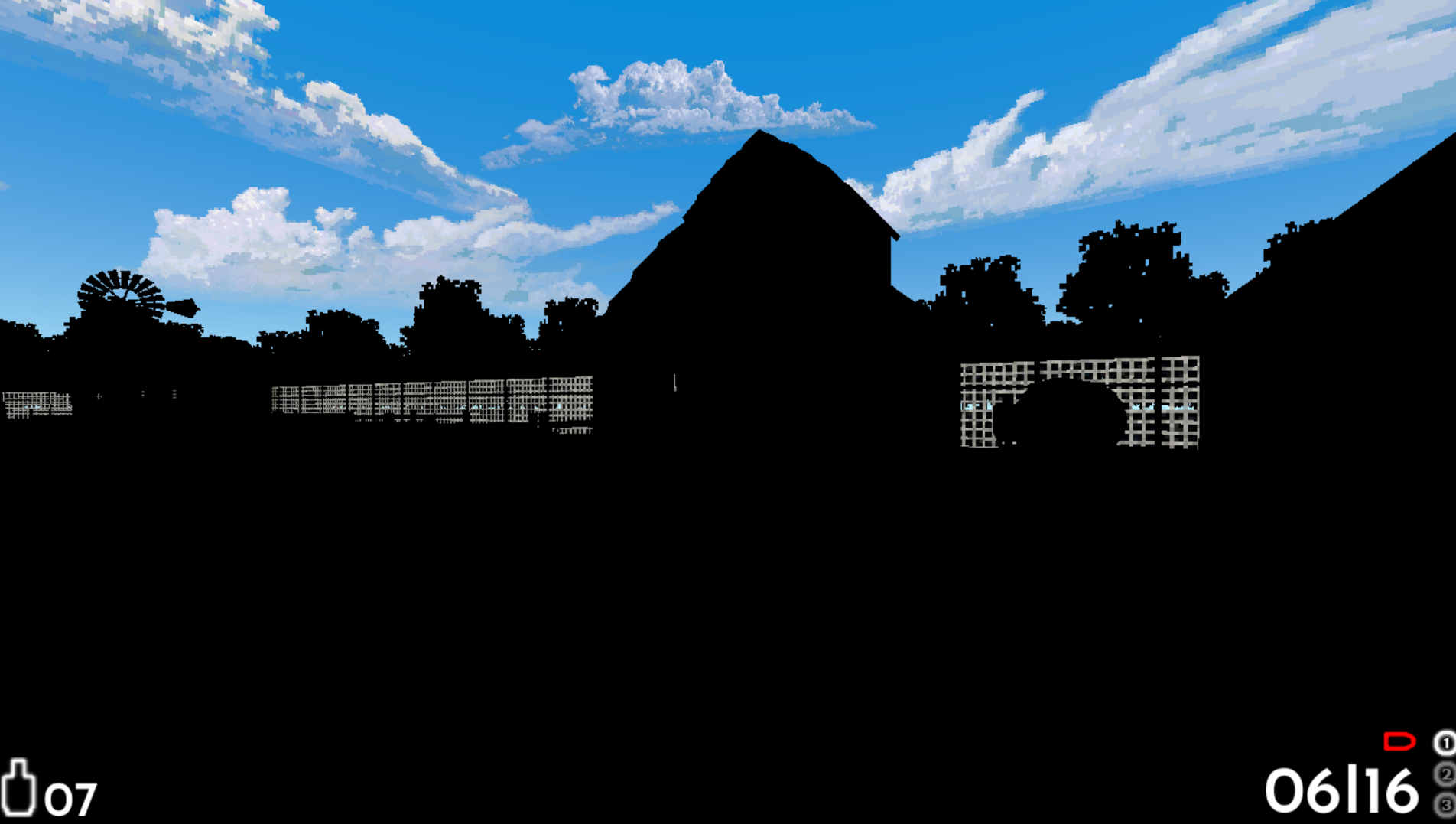 So anyway. If it sounds like I'm complaining, know that I had a lot of fun playing. Keep up the good work!

The music stopping is intentional; it's only a 25-second loop that will get annoying pretty quickly.

I'll try tinkering with the screen size. I want to make this phone-friendly so I'll have to see what resolutions work well there as well. Thanks!

Oh that's a good idea. I did want to add some way to keep track of distance, but that would be a better metric.

I made a game thanks enginedev

I hadn't even considered this. You're meant to hold the mouse button or key, not click it. I'll have to think about making that clear.

Thanks for your feedback and for the insightful video. That's definitely an important consideration.

Very ambitious. The campaign really needs to teach the game better; there's already so much going on and it's overwhelming. Some good ideas here and I look forward to seeing what it becomes.

Thank you! Now I'm trying to justify to myself the work it would take to implement the great beach ball star constellation.

I want this to be a real sport.

There's so much potential here and I'm excited to see what this might become.

The minimalist aesthetic works really well. After playing for a few minutes and dying a few times, I don't really see anything to strive or continue playing for; maybe that's the lack of upgrades and such in the demo. Have you tried incorporating movement in any way?

Neat idea. I managed to trial-and-error my way through to the end. Maybe a map or at least compass would help keep the player oriented. Taking damage is typically a negative, so I felt like I was doing something wrong most of the time.

This looks great! I think it could really use proper (procgen) levels.

This is a lot of fun! The core loop doesn't hold up for very long, maybe you could try objective-based levels? Tank controls (at least as an option) would sell the fantasy better. It looks and feels really solid; I hope you keep experimenting and find a good direction to take this.

I had trouble getting save states to work and gave up; I'm sorry that ended your run. But, I'm glad you enjoyed it! 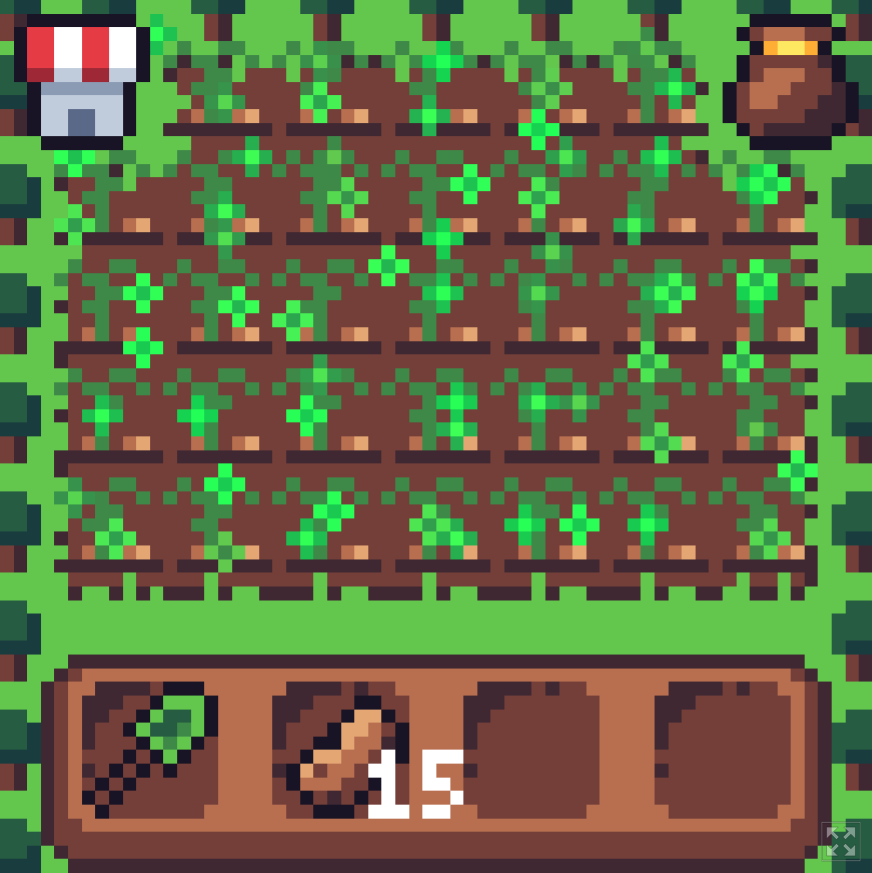