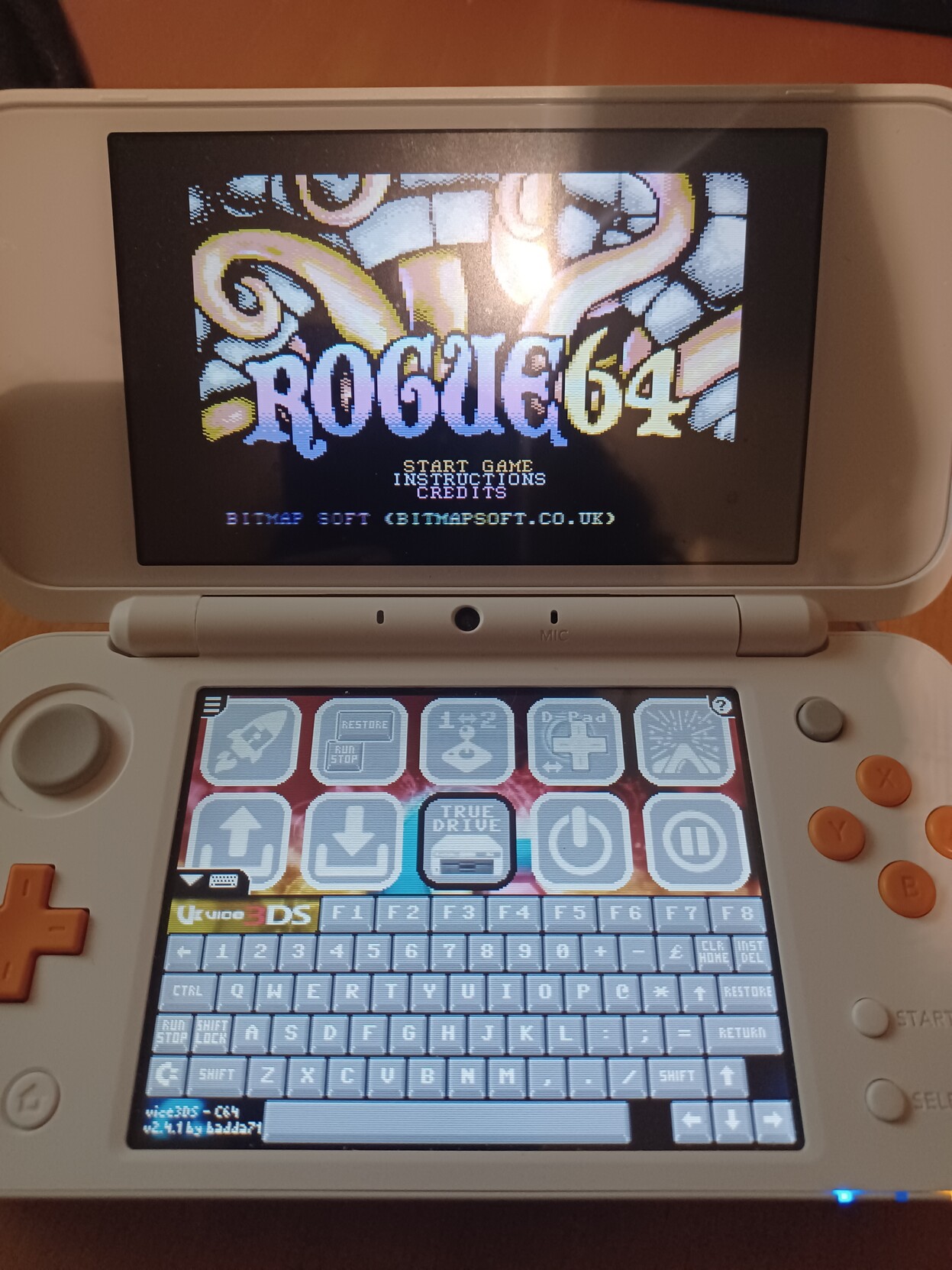 Rogue64 running smooth as butter on the Nintendo 2DS XL via Vice3DS. The sound sounds amazing, the screen looks fantastic, and playing with the D-pad and buttons is very comfortable and intuitive. The virtual keyboard in Vice3DS even lets you access the function key shortcuts. It's a fantastic experience played this way!

I feel like a huge fool; I'm sorry for wasting your time! When it says "Finding a grave..." I was just waiting patiently, and it never changed or updated. I didn't realize that you have to press A to make it continue.

Hi! The browser version doesn't work for me (perhaps because I'm using Edge?) but I like your stuff so I bought the .gb version. I'm playing it with John's GB Emulator on an Android phone and when I loaded the game it seemed to work just fine. It was cute, although I didn't really understand what to do. After a little while I saved (using the main Start button menu command) and then closed the emulator. Next time I loaded, the cartridge launched okay but when I tap Start, it asks for the language again (I say English again) and it just hangs on "FINDING A GRAVE..." forever. :/

No worries! I really love the game. :)

I think the zine version's printing instructions may be wrong? I used a lot of paper wondering what I was doing wrong, but it turned out that as soon as I switched to "Flip on Long Edge" instead of "Flip on Short Edge" as instructed, everything worked out perfectly.

Also, for people who use Letter rather than A4, the combination of printer margins and the difference in paper sizes will cause the folds to cut pages in the middle of pictures/text. The best way to avoid that is to not only shrink to fit, but also turn on bleed marks, and then trim the pages according to the bleed marks.

When you do that, the result is wonderful and super cute! My partner was having a bad day, so I gave it to her as a present and she was very happy. :)

THANK YOU! :D I should have been able to figure that out from the other images nearby, now that I think about it. I'm glad I got them all though -- those were super cute! And thank you for a wonderful game.

I played all three games, found all the endings in all of them, read through the epilogue, and there are still two unlocked photos in the gallery! WHAT?!

Can anyone help me figure out what scenes I missed? Both gallery images are on the second page -- in the top right and the bottom middle.

Any help would be appreciated! Thank you!

This game was... okay? It was a reasonably good take on environmental storytelling marred by some poor decisions. Having to click-and-hold until a meter fills to interact with an object is beyond obnoxious for players using a mouse, especially when it's the sort of game where you're pixel hunting for and interacting with every single interactable object in the environment. The interaction hotspots were too big for some objects, and there was no obvious way to halt the interaction once you'd started having it again (it turns out that most of the time you can just move away, but that wasn't immediately apparent). It got off on the wrong foot by declaring on the first screen that the game was designed to be experienced in a single session, so no saving is supported. The game *is* short, but you don't know what people's lives, attention, free time, etc. is. I really feel like any game that says "The game was designed for X, so Y that you as a player expect will not work / be available," immediately scars the developer / player relationship and shows that the developer cares more about their artistic vision than your needs and experience.

Overall, I would have forgotten all of that if the game had knocked it out of the park, but instead it was sort of a middling, predictable story that felt a little trite.

This is among my favourite types of games, and for a game that I paid essentially nothing for (I got it in the bundle) and spent very little time on, it was satisfying enough.