OUR LAST NIGHT AT A CURSED VILLAGE
A collaborative horror storytelling & mapmaking game
nuttatulipa
Thai Bitsyfont
Thai font for Bitsy Game Maker
nuttatulipa
Who will save the Hero?
Otwald
Visual Novel
Play in browser
Six Street
Meet your neighbors and the local businesses they run. Made for Neighborjam.
cygni
Interactive Fiction
Escape From H1-MA Station
The deadly frost blast will reach the station in 30 days. Phi must find a way to escape from it.
nuttatulipa
Visual Novel
I Don't Know How to Have Hotpot Alone
A hearty meal with a bitter-sweet childhood memory
nuttatulipa
Role Playing
Play in browser
Dungeon Girl Scouts
Sell cookies, Befriend monsters, and Solve a mystery! Also don't forget: "Dungeon Girl Scouts are always prepared!"
nuttatulipa
Adventure
Play in browser

‪I absolutely love the theme and the prompts of this game! Knowing that my character will probably never return from the investigated site also gives an extra spooky point to it.

‪Thank you for creating this. I can’t wait to play it with my friends! :)

Thank you so much for your kind words. And of course, I'm excited to see what you are going to create!

The license for OUR LAST NIGHT AT A CURSED VILLAGE is CC-BY 4.0, so please also credit Grant Howitt’s Honey Heist when you publish the material.

Thank you for making this game. It's really sweet and soothing. I love the flower sending scene and think it will stay in my mind for a while. :')

What a delight game! I really like the ominious feeling it has. Its art, writing, and music also go very well together, and the point-and-click part is comfortable to play. Thank you for the experience!

Thank you! The music is made by amazing people at Blue Dot Sessions.

Thank you for your kind words! I hope you can have hot pot soon :))

Thank you for playing! :)

Thank you so much! I really appreciate your kind comment :)

The tiles and sprites look so good! I can tell what/who they are even before seeing their names. Great job!

Heya, I’m nutta and this is my first ttrpg jam!

I plan to write a map-making game about a medium channeling a spirit who is trapped in Limbo and see if they can move on to the next life. (loosely inspired by the Haunting of Bly Manor, Conjuring, etc.)

I haven’t gone into details about game rules yet, but I’m thinking about using a deck of card to determine which room will be drawn onto the map, what will happen in each room, and where the spirit will move to next!

Player (the medium) will draw a map and take note as the spirit moves through each room of a manor/house/building to recollect the memories of their past life... or runs out of the time and forgot who they were.

No problem! And thank you for playing :)

Thank you for making this game! I can tell you guys pour a lot of love into it!

The artwork is stunning and the soundtracks suit each scene really well. I cannot stop blushing reading this loving tale. It is, without a doubt, a great game that I’d recommend to anyone who like wlw contents.

Thank you very much for your kind words! I'm glad you enjoy the meal.

I’m glad you enjoyed the cookie selling trip! And thank you for your kind words.

Thank you for playing! You are too kind! ;v;

Thank you for your approval! ☺️ Do you mind stick this thread so it won’t be buried in the future?

Heya! I noticed that there are many people joining the jam already, but there has not been a team-finding topic/discord set up yet. So I’d like to make this an unofficial place where people can do it. The thread is now approved!

Thank you so much for playing & your kind words!

The game is additive and I really like the idea of living in a city on the giant turtle!

What a zen game to play! It's enjoyable too see what hidden under the snow.

The art of this game looks very nice! I wish the interface is complete and there is some in-game intruction. But good job at making a prototype!

The game was addictive but rather difficult. ;v; I died a lot haha! Wish there was some cooldown between each enemy's attack. As for the art, the sprites and background look really great!

I like how a small screen makes the game more challenging! Wish to play more levels and hear Toby's secret.

The bee sprite is sooo cute! I still try to get ⭐️⭐️⭐️

Thank you for making this game! I had a lot of fun playing it.

The story is very well written, and the art is really fit to the theme. Using twine-like links in dialogues is also very clever!

Heya! We’ve released the updated version which fixes the bugs we found! Please give it a try when you have time :D

Thank you for playing! Your comment means a lot to us! As for the loop, we have fixed the bug and will released the fixed version by this weekend, but for now you can bypass the loop by reading the daily announcement messages with Cancel button [X]

(Guess I’ll be the first person from my team who writes this, so here we go!)

First of all, I have to say that Escape From H1-MA Station is such an ambitious project for a 14-day jam! We planned so many things at first and had to cut the numbers down to make a minimal playable game. (Unfortunately, the game was still submitted late. But on a bright side,  our team started quite late as well.)

I was very confident with the engine (RPG Maker MV) at first because I’ve some basic knowledge. But making a visual novel with time-resource managing element was totally a new territory to me. It was challenging, yet entertaining to implement the time-calendar system and build the jobs and crafting system around it. 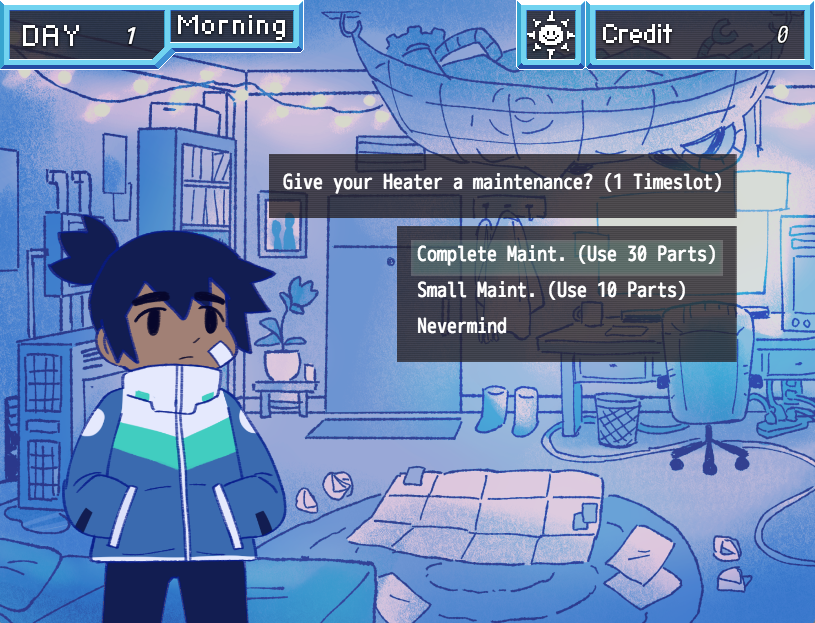 Since my knowledge about plugins was rather limited, I created most of the game mechanics with RMMV eventing. (The game used many tricks I’ve learned from old gba-era games, like combining some UI with the backgrounds)

The over-world map below was made solely with eventing. ;)

It surprised me that the visual novel part was actually the most time-consuming section of the development. One reason was because the engine was not mainly made for it; I had to put the character sprites and the script into the game sentence by sentence. (All of that worths the taken time though, because many players were impressed by it!) At least now I know how to do it quicker for the next games.

All in all, it was a fun experiment making this game. It also taught me a good lesson about communicating  with my teammates, especially when our team was from different timezones across the globe! Using Trello was a good way to keep the team updated and sharing the files on google drive made everything more organized and easy to find, which become crucial when I needed to put everything together.

I hope this post-mortem not only lets me reflect on things happening over the past few weeks, but also interest you to try our jam entry out!

Thank you so much! I'm glad you enjoy it. :D

Oh! What an interesting exploring mechanic. This could become a good story-telling game. Thank you for making it. 😄

Our game is complete and the game files are now uploaded to the game page! 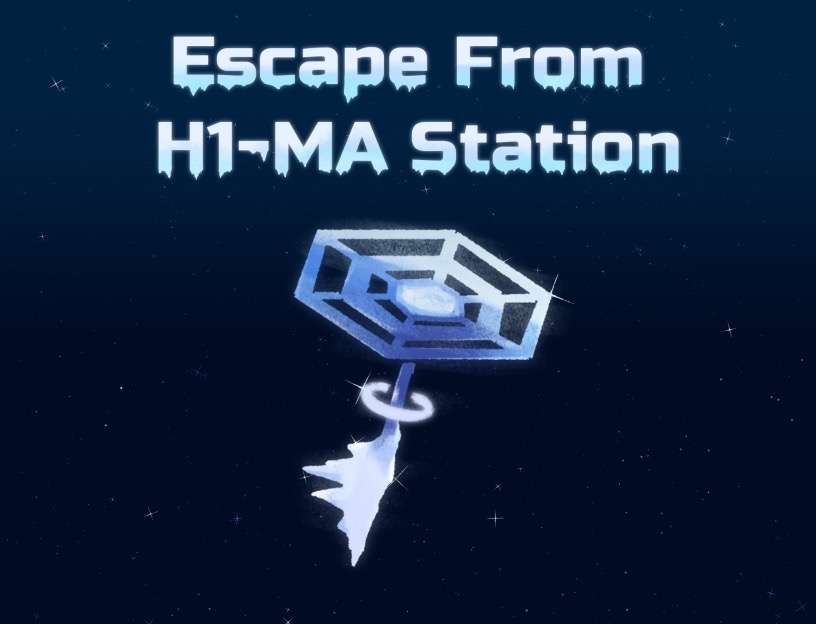 After the explosion of frozen star Tomo-E, our protagonist, the young engineer Phi, is put in the situation. With the frost blast meant to reach the station H1-MA, find a way to survive in any means.

Hello! The game file is uploaded to the game page now. I hope you enjoy it! :)

Heya, sorry for late! The game will be a late submission. We’ll get the file uploaded soon. :D

Could this be... the beginning of a greedy landlord?

Just kidding. These are just placeholder dialogues and UI, but aren’t the art assets looking amazing in game?

Please tell us what you think about it! Constructive criticisms are very appreciated!
Reply