DUGA community · Replied to Finfee in DUGA: The greatest Roguelike you never played
CodeSlayerYT29 days ago

There is a fatal bug with itch.io!

I have been trying to download pixelbox on the *free tab but the links are completely busted.
I believe this to be a bug of itch.io but I don’t know where to write this bug in order to send it to itch.io so I am writing about it here instead.

the links thingy showed at the corner of the browser(I’m using chrome) that shows you the link said:
‘Javascript:void(0);’

*By that I mean the ‘No thanks, just take me to the downloads’ page

Thank you for replying!

I am glad I could be of help to you.

Also, thank you for the tip, while the map is quite slow when it runs on my laptop,
I didn’t think too much about it, but I believe this ‘trick’ would work wonders, especially on bigger maps that I have planned!

That is all! Oh, and sorry for the late reply as I had just come back from school.

Here is the new upload (it should work):
Escape from Tartarus(WIP)

Well, if it is true that Pastebin here is at fault then the solution that I would like to propose is to use google drive to share the file instead as Finfee did in their Wiki thread.

From your response in that thread, it seems that this method does work. Let me try posting my new levels in the Custom Levels thread.

Before I start, sorry for the lengthiness!!!

After I send my reply, I decided to do a few tests on my own as I am intrigued by the problems that both of us have encountered and I forgot that I put my test level on Pastebin which is the reason I wrote that last paragraph.

I run notepad++ as administrator(this is because I had put my DUGA folder in program files) and press ‘edit in notepad++’ on customLevels.dat.

Instead of opening the file in the Level Editor, I decided to play the custom level in DUGA; but I then got an error before the game even run. I have put the crash log here: https://pastebin.com/YfnMaeDD. Intrigued, I then tried to load the levels in the Level Editor using the ‘trick’ and I got the same bug: ‘there are no saved maps of this kind’.

I then decided to copy the new levels that I made from Pastebin (using the same method that I mentioned in paragraph 4) and paste them into the customLevels.dat file and then try to run DUGA again, I did this because I had a hunch of where things go wrong and… DUGA crash again with the aforementioned crash log.

It Works!!!! It ran and I was able to play both levels with no errors or crashes whatsoever.

This means that my hunch was correct. The root of all problems here is Pastebin. Perhaps it’s because Pastebin decided to format the binary data by putting them on different lines or something similar, I don’t have a lot of knowledge in Binary(other than the basics) and the likes so I don’t know what else could be the cause.

Of course, I am not a professional developer such as you so I don’t know if there is something else I’m missing but I thought that if I could help you to find the problem faster it would certainly be easier for you as I don’t want to trouble you.

Well, that is all from me!

Oh! and this is a picture of the crash: 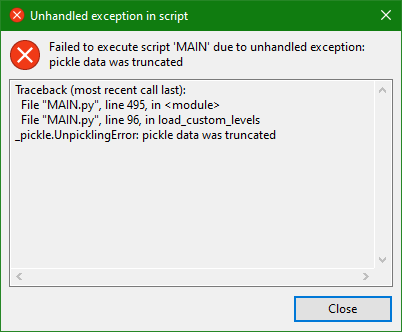 Thank you for replying! I have tried the ‘trick’ you provided and it works! I have downloaded DUGA only recently so I am sure I have the updated editor.

About the expansions, that is fine as I understand that you have been working on a new project, so, please don’t worry about expanding the editor as it is a mere request, not a demand. Thank you in advance for updating the editor!

Finally, Thank you for taking a look at my custom levels! As for the steps that I took in order to make it, I just played around in the editor, then once I finished making a subpar level, I then clicked export, went through the saving/exporting process and after that is finished, I send it to Pastebin.

But I can not test the file now as I have overridden the slot with a new level, if you don’t mind, would you try with the updated level and see if the ‘trick’ works, because for me it does.

Here is the link: https://pastebin.com/cxXr4mFW

I see. Well, it is just that I am quite interested in this wiki of yours but if it is still in the works then I guess, I will just have to wait for it to be finished!

Good luck with making the wiki!

(oh, and I just remember the chat that you have with the dev and wondered if you have bought your laptop or not)

I tried clicking on the link that you sent in this thread and it did not work,

If you do not mind, can you send a new link?

I am another humble and rare user of the level editor and I would love to make maps for this game.

I was about to create a thread in order to let this bug come to light until I found this thread.

While there are many things I want improvements on, I feel this is the most glaring bug there is to the level editor and so even though the OP did not reply to you, please take my reply as me being interested in you fixing this. Oh! and just so you know I would like you to take your time, as in the other posts I have seen you in, it seems to me you are quite busy.

Finally, I hope you are able to expand the editor to become something akin to most level editors that you find today!

(p.s. before you asked idk why I did this like we’re email buddies, kinda just happens, haha, sorry)