That is curious. Hexes are inherently connected with isometry. A hexagon is basically an isometric projection of a cube.

Hi, SinJackle! When I update it next time, I will add an mp3 version. As of now you can use a free app, called Audacity, to re-encode and edit these effects.

The preview doesn't work in Firefox. Shows vertical bars red-green-blue bars. Why not include a static screenshot?

Well done anims! I will use them for several time travel spells in my game.

Again. The cave background matching these characters is not included :( I wanted to use them as NPC placeholder, but they need some bg.

Why the tombstones background is not included?

The art on the previews has this oldschool feel, but the tiles are a bit too big for the characters. Especially these boxes, gravestones and altars with giant skulls stand out. I think it would looks order of magnitude nicer if you downscales tiles to match the characters.

The character sprites are around 400x400. Purchased it as part of a pack. Wont be of much use for me (beside the flamethrower anim), but the art is okay and in high dimension.

Yeah. You need Photoshop to make any use of this. In fact the exact version of Photoshop the author has used (otherwise layer effects will be botched). If you have no Photoshop, then sorry, you have just wasted your money. No pngs or anything pre-rendered included included.

Cool slime with a lot of character!

I'm not Ubisoft to DMCA anyone.

I'm not rude, I'm just warning people it can be unsafe to use assets derived from the Ubisoft property.

Wow! That is one crazy license! So it forbids adapting the font for the game? Even recoloring it to say match the title screen palette? Because how else can you modify a font?

Is it the same Terminus as the default Linux console font? O_o Because I remember the Linux font being larger and less stylized.BTW, your fonts also look nice vectorized for higher res :D 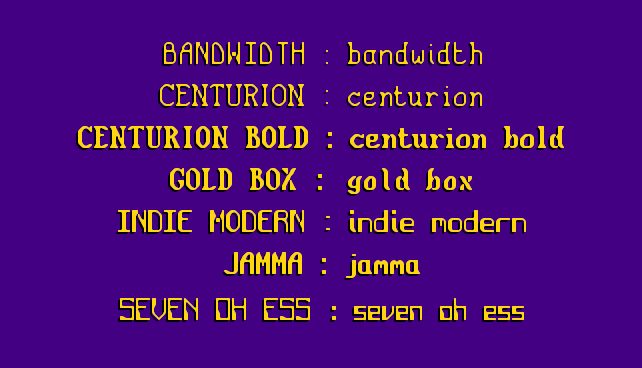 I'm dead sure the author has plagiarized a few items from HoMM3. I doubt UBI soft will sue small projects, but DMCA takedowns are not a joke either. Use with care. I'm also ashamed my Russian compatriots cant come with something original and steal designs :(

Beautiful! Reminds me of Ogre Battle.

Can these be used in a game I will sell at itch.io? The smoke sprite can be useful in my game. BTW what happened to the Explosion Pack 1? Or it is just a version number?

The game looks cool. But why the map is diamond-shaped while the world is made out of hexagons? So many playable factions can be a bit too hard to balance and can be confusing for the player.

Ok. It opens with the PlayOnMac Wine (but not with the Brew Wine). Unfortunately png and gif export don't work (wine doesn't provide the extension), so it is useless. Although it works flawlessly in VirtualBox with actual Windows 7.

Why do these mossy derelict ships have perfect white sails?

Has anyone tried with Wine on OSX or Linux?

You can publish it separately in something Blender can import. Like FBX, OBJ or 3ds. Blender is free and allow export to all kind of formats. I personally need a 3d balloon model to modify and render into an isometric sprite for my game.

Does it include that 3d model for the AirShip?

Is that generated by a neural net?

Wonderful! I will use it as a magician in my game. Have to edit it a bit adding a spellcasting animation though :D

The knight is cool, but I already have one. BTW, your latest projects look fun. Especially that Indiana Jones rogue-like. Would be nice to see a proper game in the setting, maybe with Nethack influences, and random puzzles like picking the real Holy Grail.

Hi! Have you finished the character?

Hi! That is some ancient long obsolete version somebody forked. Newer
version was at my github account, which got banned since I used one of
the repositories for a WIP book about my life in Russia, which also
criticized America, Trump and American immigration policies with
deportation of Mexicans. Some alt-rights reported it and whole account
got banned.

For now Symta is still a work in progress. Game development has shown
that many improvements can be done, especially in the scoping
department. It was originally published mainly to get some feedback
from programmers, not for actual practical use. BTW, Symta is not APL
based, but Common Lisp based. So if you're familiar with CL, Clojure
or Scheme, I would be glad to hear some criticism on them and possible
areas of improvement.

Cool! I made head a bit more menacing to fit my game's artstyle and also removed excessive idle-anim wobbling.

The sprite has one problem - it is longer from the back than from the front, as if it was rendered different camera setting. So I had to fix it.

a bit for my game :D