(here i am again to show off another Stand i made, wooh!) 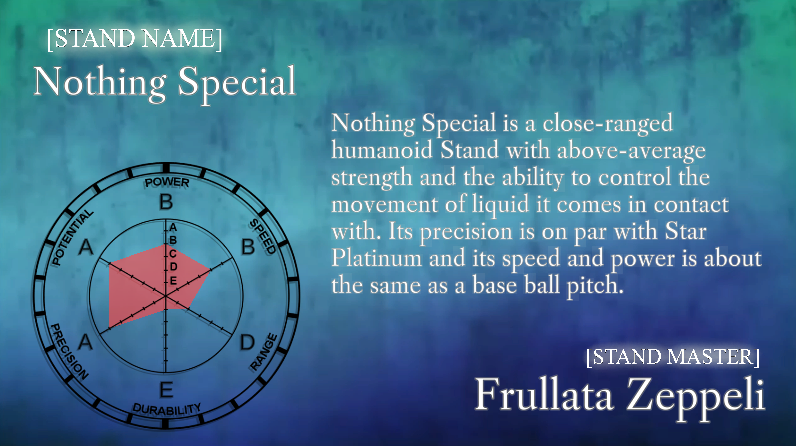 ➟ History: Born in 1990 (17 by 2007), Frullata is the Great Granddaughter of one of Caesar A. Zeppeli's brothers. She had heard stories of her ancestors but never knew about what happened to William and Caesar Zeppeli or the Joestars.

In 1995, at the age of 5, her family's house caught fire with her miraculously being to only survivor. Soon after, she slowly began developing a Stand, most likely as "defense-mechanism" her inner spirit caused. During her time in an Orphanage, she would often not be seen for hours in the afternoon as she would sneak out and explore the town she was in,. As she got older and more recognized by the people of the town, she was given part time jobs at a few of the stores and was eventually adopted by an old couple who owned a small soup shop and started going to school.

At the age of 15, in 2005, Frullata felt compelled to go to her abandoned, burnt down house from her childhood. Whether this was out of curiosity, or a sign of her fate is uncertain, but she eventually found a relic of her ancestry: an old, damaged newspaper of Caesar Zeppeli during his time in a gang.

Piquing her curiosity for her old lineage, Frullata is now set out to investigate anybody who may have ties to the Zeppeli name to find out more about where she came from. As of 2007, she's currently interested in a Japanese Marine Biologist who's family may have come into contact with hers...

➟ Stand Ability: Nothing Special has the ability to manipulate the movement of any liquid that it or Frullata come into contact with. Its most notable use of Nothing Special's ability is stopping a liquid in mid-air to create a small barrier that can slow down any projectiles coming towards her. This ability cannot change the state of the liquid and is only exclusive to the liquid state of an object. 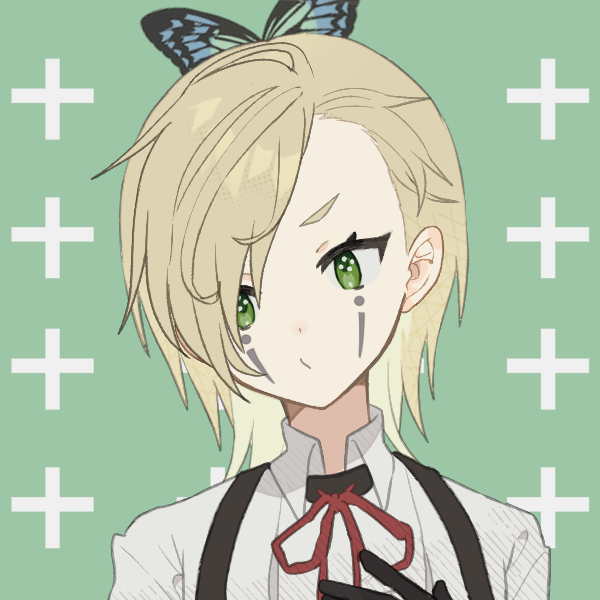 this is an incredibly well thought out stand and like the other person said, even if the art isn't yours it definitely adds a ton to the whole thing 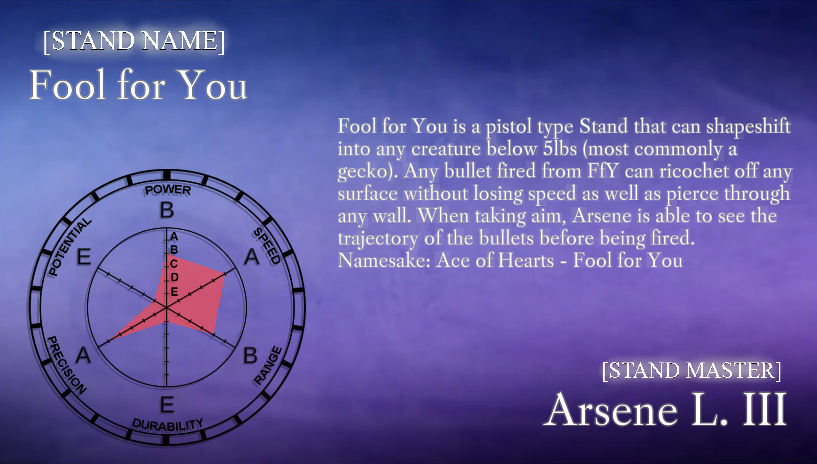 yeet here's another one

interesting... Sorry for all the questions but how would he do against「 D4C Love Train」?

Ah, I see... So he still has the Requiem title but he's too strong for the Requiem arrow to pierce him?

what about Chuck Norris Requiem?

you can't directly change the stats. the only way to manually change stats is to lock everything except for the stats you want to change and then randomize your stand so that only the stats are updated

Appearance: Pleasure Cruise is a 5'6" Humanoid Stand with a slim frame. It's main colors are Pink, Purple, Magenta, Orange, and Yellow (basically sunset colors). The head somewhat resembles Heirophant Green's with a less robotic look. It's chest and shoulders have magenta "plates" on them with the plates having multiple black holes on them in a lady bud-esque pattern.

Ability: Pleasure Cruise is able to almost instantaneously analyze any person, object, or Stand's height, weight, velocity, and any other key factors in someone's trajectory to predict where they'll be within the next few seconds and counter attack. As fast and strong as Pleasure Cruise is, it's practically useless against a still opponent from afar and can be over powered by multiple people pretty easily. 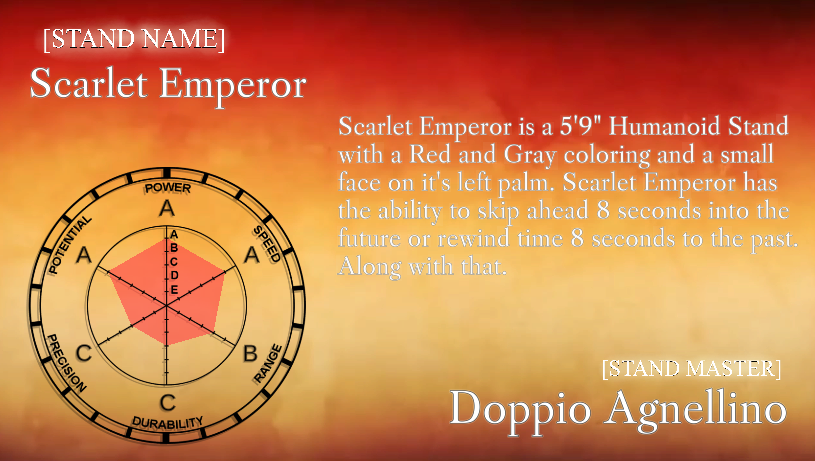 Appearance: Scarlet Emperor is 5'9" tall, has a Humanoid appearance with a Red, Orange, and Gray color scheme and a small face on it's left palm. Scarlet Emperor also has a much less intimidating appearance compared to King Crimson to match Doppio 2's personality.

Ability: Scarlet Emperor's main ability allows Doppio 2 to Skip ahead 8 seconds in time. Although the names are similar, Time Erase and Time Skip are two very different abilities: While the Time Skip visually resembles Diavolo's Time Erase, the actual ability works somewhat closer to Dio's Time Stop with everyone outside of Doppio 2's Time Skip "Court" seemingly being frozen (or at least extremely slowed down) until the 8 seconds pass. However, unlike the Time Stop, Doppio 2 is not able to manipulate any objects or people and doing so will prematurely end the Time Skip. Time Skip also doesn't affect people outside of it unlike King Crimson's Erase Time.

Sub-Ability: The small face on Scarlet Emperor's left hand is「The Empress」and it grants Doppio 2 the ability to rewind time for 5 seconds. When Doppio 2 uses his Rewind ability, everything appears to slow down and his vision has this RCT TV "filter" as if he was rewinding a DVD movie. During this time, everything will start rewinding back to previous actions until Doppio 2 decides to stop it, or until 5 real-world seconds pass. Unlike Doppio 2's Time Skip, The Empress's Rewind ability affects everyone and they'll all retain their memory from before the Rewind

This is honestly a really cool game. You can tell that Melee was a big inspiration for it without this game just being a carbon copy of it. And it's smaller moveset in addition to the wonky artstyle separates it from any other Platform Fighting Game i've seen before. A few suggestions i have to improve this would the add maybe one or two new moves (unique air special for example), Controller customization (the current layout for P1 makes it wavedashing hard and inconsistent), and the ability to change P2 into a CPU to fight. Outside of that though, this is incredibly well made!