Maybe you could make a Discord server for the game? It seems that the game is becoming famous

Ok, make me know when you want to collaborate then! I'm also an amateur muscician if you want some tracks.

Absolutely, nations now have basic common sense and we can edit maps now, Its a huge advance. I'm also happy that you will be more active in devlogs, I'll try to give new ideas, and one last thing...

I want to collaborate with you making spanish translation, if you know how add that on the game, I'll be willing to traduce all of the game's text to spanish so non-english players can enjoy the best of it. (Even tough you can play without reading anything but idk) Here's my discord if you want to: Michel440#3150

Edit: I know you want to know how many time people play, so here is a recap of my world in 2022: 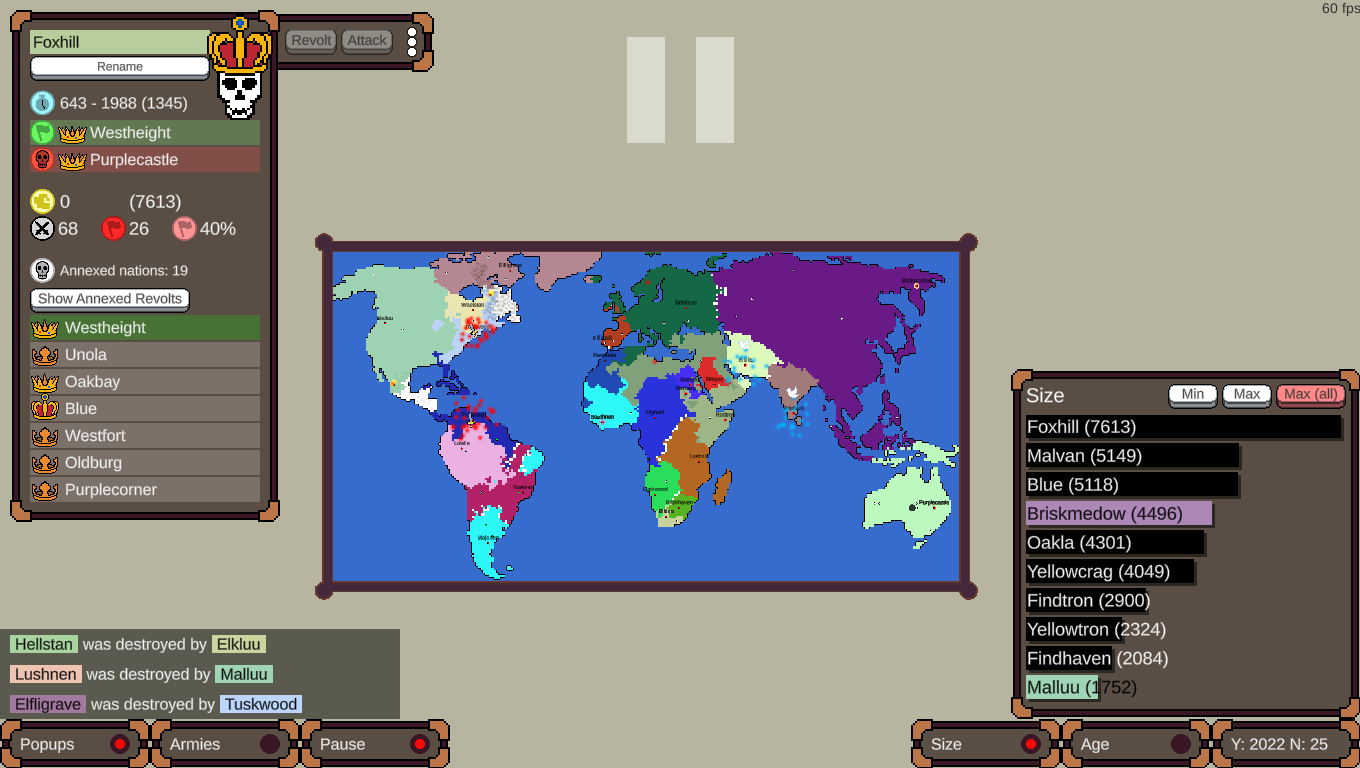 And this is the world in 2222, Minornia favoritism included :D 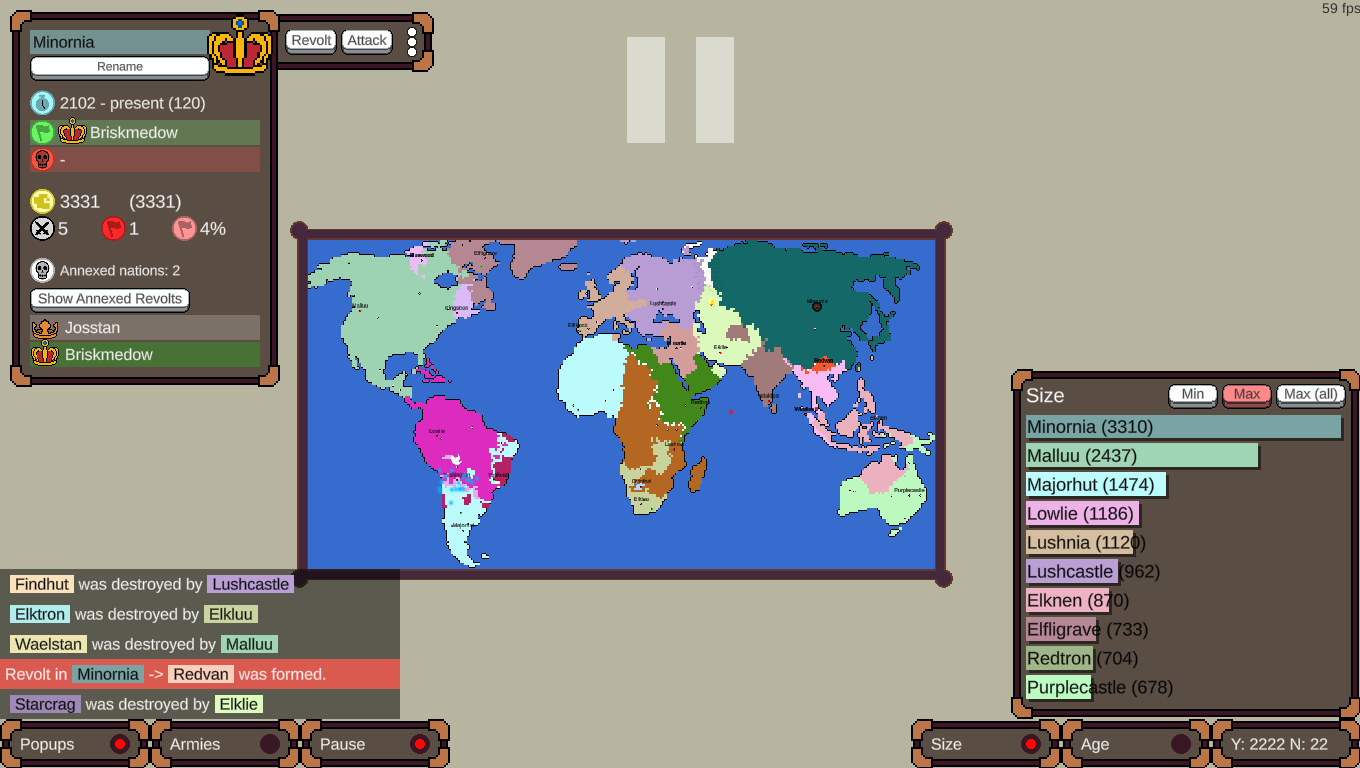 Foxhill's history is quite interesting and ironic, it first defeated its owner with help of all the other rebels, and got destroyed by all of its rebelions united...

Can you make a post telling how development is going by now, what have you added, and what do you want to add in the future?

A devlog would be appreciated, at least for keeping hopes up.

When is the next update coming out

You're welcome! And also, I think that alliances could have traits defining them and their members and that nations could earn traits over time, like a nation that haven't been in war for several years earns the peaceful trait. Again, an awesome game that I expect to be even more awesome ;)

Edit: I have read the desing process log and if the armies are one tile, they have HP and they lose it when conquering and attacking other armies. (Or at least thats what I think) Could you show this on Armies tab? Armies moving and their HP would be something that I'd like to keep track on during a war.

Game is so much fun :D

Reminded me of my WorldBox worlds when all of the land was occupied by kingdoms.

So I have a few ideas for the game:

1- If you are going to make alliances, make them have names or something that identifies them (I mean alliances like a group of nations, not an alliance of relationship between 2 nations) and that when an alliance wins a war against another allience, all of the captured land will be shared equally between all of the nations of that alliance.

2- Nation traits (Like the ideology idea of MewsterGames). This will be like the nature of the nations, for example:

So you can make the nations more unique.

3- Tecnologies. A tecnology tree that you can see when you see a nation's info. Nations will be researching more and more over time, and some tecnologies only unclock when the world reachs a certain age or era. (You can also add this, for example: Stone Age, Bronze Age, Medieval Age, etc.) It will be cool to have distinct brands on the tech tree and that nations develop their own style, for example: Army and Economy, Colonization and Politics, Relationships and Army, etc.

4- Army raids. This could add more use to the Armies tabs, basically its that the armies move around the map in big groups (It can be sea or land, also sea ones could transport land armies) and fight each other.

5- Distinct types of war. There could be different types of roles in wars, for example: One nation declares war to another, that nation is in the role of "Attack", while the other, depending on their traits and the situation, could be "Defense", and hold still until peace, or be "Fight Back" and try to fight back the enemies while conquering their land.

6- Recources. Not only land, resources can make the difference in a war. Things like gold, food or soldiers will do.

7- Trade. Nations/Alliances can make trade routes and trade resources with other nations/alliances.

8- Cities. Besides of the capital and the forts, this ones would be strategic points for nations and alliances, because they will produce gold, soldiers, and serve as trade points.

9- Nations don't disappear when their capital has been taken. Okay, some will, but what I say is: There was one nation that has the entire Africa, and then *poof*, it disappears because their capital in Madagascar was taken, its just too unrealistic. You could take the city mechanic I sugested and make that when a nation looses its capital, it just switches to another city, but with a HUGE penalization (Land, resources, whatever you want).

10- Time go slower/faster. Sometimes I would like to slow down time to see what happens with detail, and sometimes I just want to go fast foward. I don't think that I have to explain this one.

11- Slower colonization. One single nation that started on a small island colonizated the entire world with insane speeds. Maybe you could make that colonization speed depends on size, resources and tecnologies of a nation.

12- World peace. Wars cannot occur just because, you need to justify that with something, it could be hate, alliance, or something else (Maybe nations that go in several wars become more hated, and peaceful ones don't get wars almost never, they are more protected and only be attacked by war-based nations), its just that world never achieves real peace, like our world today, maybe in some point of the game you could make this happens. (To keep the fun in this state, nations can still make small wars sometimes, or WORLD WARS.)

13- More player interaction. Maybe make the player able to moddify relationships, alliances, thecnologies, resources, wars, rebelions, or basically everything on the game (Like a God Mode).

I know that what Im asking for is A LOT of work for you, but if you could take the time to make this, not even all, maybe just one or two, I would be happy to come back and play with these new features. I just want to say, that this is an awesome game with an awesome future, thank you for reading this ;3

Hey, I just wanna say that In the last few months I came with a lot of ideas, so if you want to contact me here's my Discord: Michel440#3150

I want to learn how to make stories, so I can work or help with the main story, and make some characters, dialogue, and things like that. Remember, my Discord is up there if you want to.

This gave me some Undertale and OneShot vibes. I think that this is the kind of game where you start playing and think; "Hm, this is going to be a sentimental game, right?"

The soundtrack, graphics, and a lot more things makes me think that way, keep up the good work!

PD: I can work on a spanish translation if you need it

Hi. I am a GMS novice programer looking for someone to join up. Anyone can ask: Sound designer, programer, artist, etc. Even if you don't know so much about game design (Me neither) you can ask!

Well, you could make an intro for every character backstory, like, "How everyone ended up in the team?" So you could strengthen the character-player bond a little bit.

Reply
Mini Jame Gam #9 community · Replied to Parafyt in Is there any passionate designer? :)
Michel440157 days ago

well sorry then I dont know how to use it

Reply
Mini Jame Gam #9 community · Posted in Is there any passionate designer? :)
Michel440158 days ago

What engine do you use?

Well hello there, I'm a Game Maker: Studio developer looking for an artist, there is no need to be professional (You can use the drawing style you want)

Thanks a lot, we are working on fix some bugs and add more buildings and researchs, you can give ideas too!

Sorry for not answering, shure you can help! If you still want

Because in the other post actually nobody helped me, I made this one. I don't want to spam this over and over again, I just need someone who can do interface and animations. The engine is Game Maker 8.1, If someone wants to join me, It will be welcomed

You can do relaxing music? Like for a building game?

Uhhh.....What? I don't know what is that. Also I need a few game ideas

Hi. I'm a Game Maker 8.1 developer and I am looking for an artist. The thing is this: First I see the game jam topic, then make a small protoype with basic art, and then I will share the prototype with an artist to improve the game graphics and talk about the game to add and improve mechanics. Thanks.