Oh yeah, for sure! As long as you credit me, I'm cool with it! By the way, I'd love to see your personal website :D

Hi there! Just wanted to share with you the game I used some of you SFX in. Thank you so much! https://mentalbloxx.itch.io/the-final-exam

Hi there! Thank you for your music! Here's the game I used some of your tracks in (with credit, of course): https://mentalbloxx.itch.io/the-final-exam

Hi again! Here's the game I used some of your sounds in: https://mentalbloxx.itch.io/the-final-exam

Hey there! Just wanted to let you know that I used 2 of your asset packs in my game (with credit). I used this one and the spider one: https://mentalbloxx.itch.io/the-final-exam

Thank you so much for making these!

Thank you for this! I believe that this is exactly what I've been looking for! :D

This is fantastic! I'd love to try doing more game design using your character! :D

As an SCP fan, I'm definitely looking forward to this!

No problem at all! I'm glad that you found my suggestions helpful :D

I really enjoyed this (even wishlisted it on Steam)! If I may, I have two suggestions for you:
1) Let the player know what each resource looks like from the start (it could just be in the instructions menu before the game begins).
2) Maybe have the dome be battery-powered to add an extra layer of difficulty once a player upgrades to a second laser.

For my first point, I found myself confused during my first attempt because I didn't realize that the little icon for the Auto-Repair upgrade represented a type of resource (sand). I didn't get the resource counter upgrade at the time, so I didn't know what it was (the same thing applied for the resource for the fruit upgrade).

As for my second point, I found that once the second laser was added, a lot of tension was gone because I could just hold down the spacebar and move the lasers around, killing all the enemies before they could even get close to the dome. My suggestion is that if the dome is battery-powered, it could have no trouble maintaining a single laser, but a second laser would drain too much power. So, either the player would have to mine for a specific resource to maintain the battery's energy OR the lasers would have a cooldown period of a few seconds (either synchronized or separate). If the former, the resource wouldn't even have to be something new, it could be something that's already being mined, but the player has the option to either use it for the battery/lasers or something else.

Anyway, those are just my thoughts and feedback. For all I know, you may have already thought of this or someone else told you already... If that's the case, then I apologize for the repetition. In any case, I'm eager to play the full version of your game with whatever the final features end up being!

This look awesome! I also love the little test dummies on your page!

I really like this! It's really cute and the colour palette you chose is nice on the eyes :D

Wow! This is amazing!

These are really cute and well made!

This is cool! Well done!

Oh, these are cute!

(Sorry, had to do a re-post)
https://mentalbloxx.itch.io/tech-ui-asset-pack 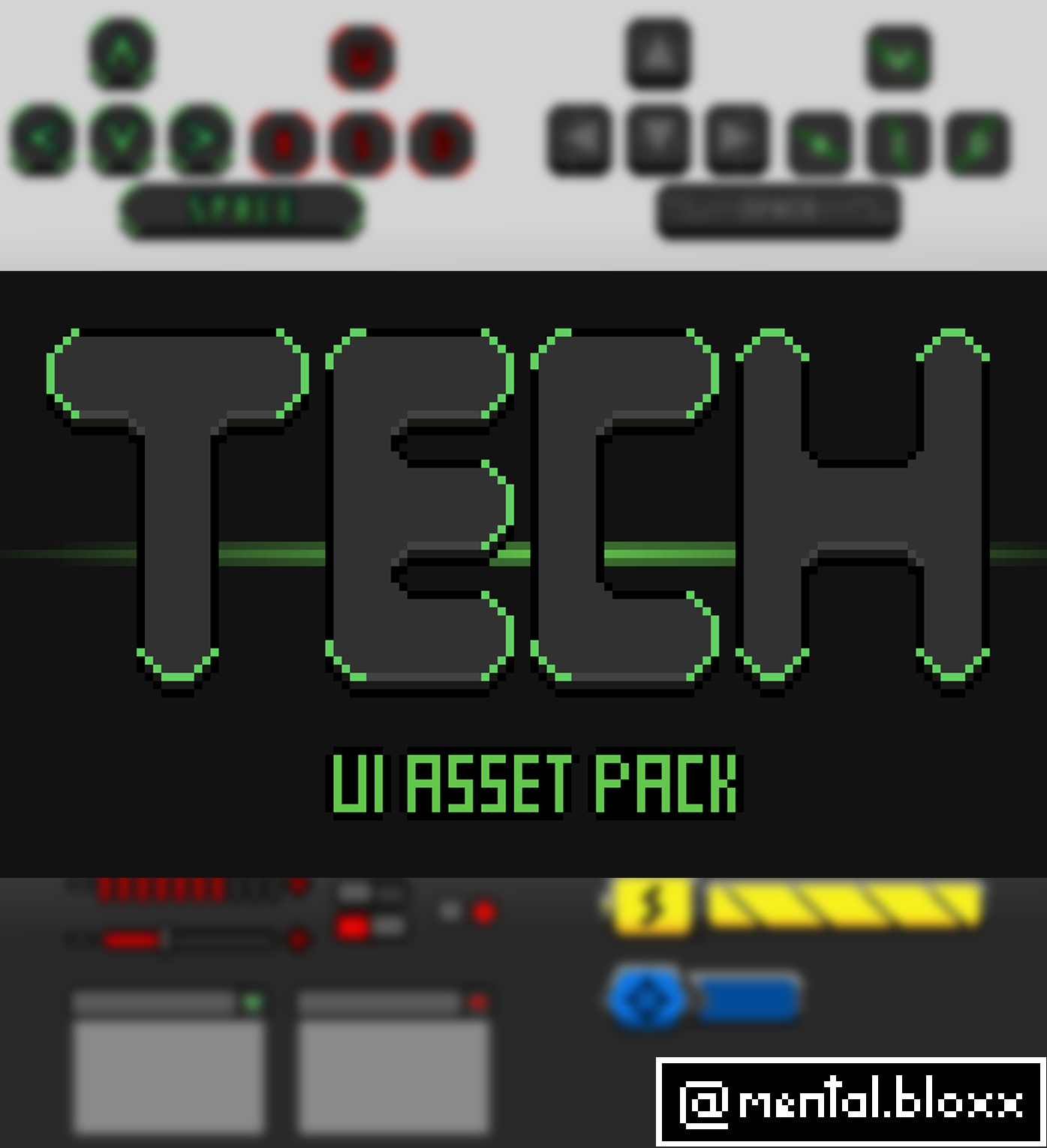 These are awesome! I just released my own UI asset pack, but it's nowhere near as complete as yours.

The little character is so cute! Keep at it!

Simple and straight to the point lol It would have been nice to have the "You Win" and "You Lose" prompts, though.

I really enjoyed this. It's simple yet challenging (but not too much). My one complaint is that turning corners is pretty awkward; not as smooth as it could be in terms of control. Other than that, all the other controls are straightforward. I mean, I don't speak or read Portuguese, but I was able to get a grasp of the controls very easily (it probably also helped that you had some screenshots, but I digress). Also, I love the art style so much, and the music is very fitting! Anyway, keep up the awesome work!

Hello there!
First of all, I think it's great that you're taking on such an endeavour to make everything procedurally generated! It could be like No Man's Sky meets Terraria.

On the critique side of things, I only have two: one suggestion, and one request. Please also note that I know that this is really early alpha stage, so I'm not here to be actually critical of anything because this is a work-in-progress. These are just things that stuck out to me:

1) When you first enter the game, you need to choose a solar system, but it's not obvious that's what you're suppose to do. Because the screen that appears is just a star field, I waited for a few seconds for something to happen until I finally hovered over one of the twinkling stars and realized that I had to click on something. So, this might be something that you'll add later (maybe you're even already aware of it), but I just wanted to suggest adding a written prompt to let the player know to click on one of the large twinkling stars. It's just that there's nothing else that suggests to click on them because the game starts right away, so I believe an additional prompt would be ideal (at least for the alpha version to help guide the player).

2) Would it be at all possible to post a video tutorial? I was trying to read through the written tutorial, but still found myself kind of confused on how to use the tools and crafting system. A visual guide would help a lot. 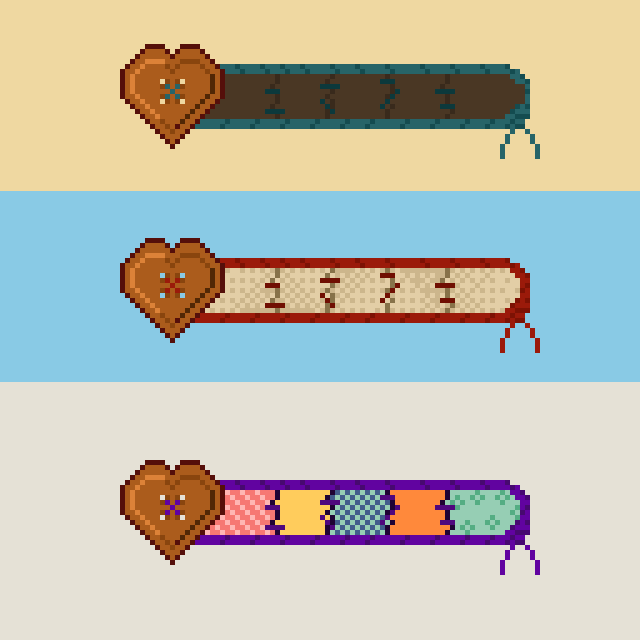 Hello there! I was just wondering if your font can be used for both personal and commercial use. In either case, thank you for making this!

Yay! That's so awesome, thank you for letting me know! I hope you have a spectacular day!

This was fun! My main suggestion would be to give each level an amount of moves to aim for (just like what you did for the last level). This way, it gives the number of moves a reason for being in the game instead of just on the last level, and it creates more tension. Also, this is a very minor suggestion, but you could add the screenshots on your game's page too. This way, others will know that there are more detailed instructions in-game. Other than these things, great job!

There is potential here. I like the idea of this game. Here are a couple of notes if you decide to continue with this project:
1) if you want to make it an endless game where enemies continue to arrive, then maybe every time the player reaches a goal, different types of enemies appear. For example, you start with regular ants, then termites, then fire ants, etc.
2) Definitely add music and sound effects.

Otherwise, this was a good effort.

This is cute, simple, and fun! The music is fitting as well. Some SFX would have been nice, though, for when you pick up cookies and drop them. I came across 2 bugs, by the way:
1) even though time has run out, you can continue playing. The delivery counter continues to increase and the failed deliveries can still decrease.
2) the helicopter doesn't need to be in the air to deliver the cookies. It can fly low and just pass through the tubes.

But those are just the major things. Otherwise, just some tweaks here and there. Great job!

This was nice (and a little addictive)! I only have 2 suggestions:
1) maybe give the player a number of tries before the level resets on its own
AND/OR
2) when the player doesn't succeed, add an overlay that says "failed" or "restart". This is because when I was on Level 1, I thought that I could keep trying without restarting the level. So, I was a little confused at first.

Other than those two things, I liked this!

I really liked this! It was fun and I liked that you had to match specific ones to get the point. Also, the dancing chef was a nice touch (very groovy lol). By the way, for whatever reason, an exception popped up on my browser when I tried to move on to a new level. When I clicked "Okay" I could no longer interact with the game. Not sure if it's my browser or a bug, but just wanted to let you know.

This was a unique game! I've heard of some games that mess with people's files, folders, or PC's in general, but I don't think that there are many. I wish I had played it before watching Halfbolt Games' stream, but those that haven't are in for a treat (no pun intended lol). The one critique I have is to change the font. It's a great font, but best used for small sentences or just single words. Using it for paragraphs can be a bit overwhelming on the eyes and hard to read some of the characters. But other than that, this is good! I look for ward to what KevinWho creates next!

I really enjoyed this! I absolutely loved the dynamic lighting in the game, and I agree, the footprints were a nice touch! Unfortunately, I couldn't figure out the puzzle. That's not you or the game's fault, by the way. I'm sure that I missed something, I just don't know what. Otherwise, this was great!