It felt it was a bit too easy to bank a heap of coins then never really be at any risk.  Does the enemy spawn rate/count depend only on the current room?  Maybe having it ramp up (more?) based on turn count would avoid this.

Well, things just didn't come together it seems this year.

I feel I got too bogged down implementing items and player upgrades.  I was attempting to have an interesting strategic progression throughout the game but it probably ended up overly complicated.

I may yet continue on with this game a bit further as it has been fairly interesting to play around with abilities based around two players.

A major issue with the game as it is right now is how confusing it is to play.  I'm constantly losing track of which character is which, when my special abilities are going to trigger and so on.  I suspect it would feel like a complete mess to someone who didn't know all the inner workings.

Spent a chuck of time working on this today after the first half of the week was mostly taken up with other commitments.  Still aiming for a game at  the end of the week.

I managed to get a lot of the basics in today: the two players can be moved around the map, kill monsters, progress to the next level, die to monsters, "win" the game, and so on.

I'll aim to get a gif for tomorrow but basically a turn involves issuing a direction for each player, which they will perform simultaneously.  Attacks and special abilities will all be triggered based on direction.

The next step is adding in a bunch of monsters and abilities that will take advantage of this mechanic.  For example: a monster that must be attacked from two directions simultaneously to be killed.  Environment features/hazards that require being in two places at once?  I'm not really sure just yet how a lot of it is going to work out.

The basic idea for this game is that you will be controlling two characters simultaneously.

Game play will revolve around tactical positioning of your two characters relative to monsters, environment and so on and strategically upgrading them for some kind of synergy.

I did a little setup yesterday to get some of the basics in place: movement around a level, walls, and a basic monster that chases after you. 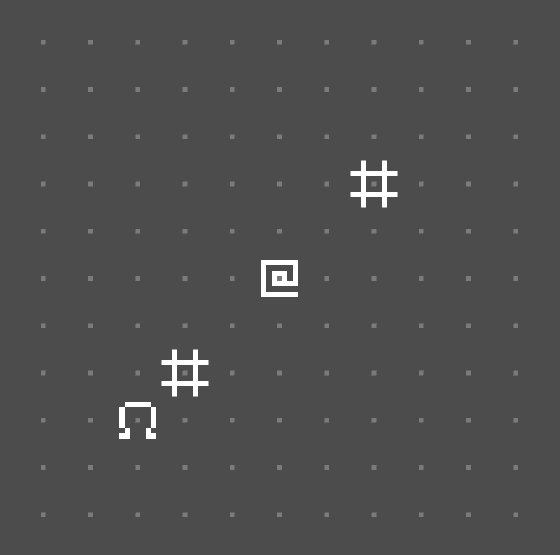