UI is super tiny on 4k

Reply
Tilemancer community · Replied to Ningow in Post your nodes below!
Lost Astronaut Studios1 year ago 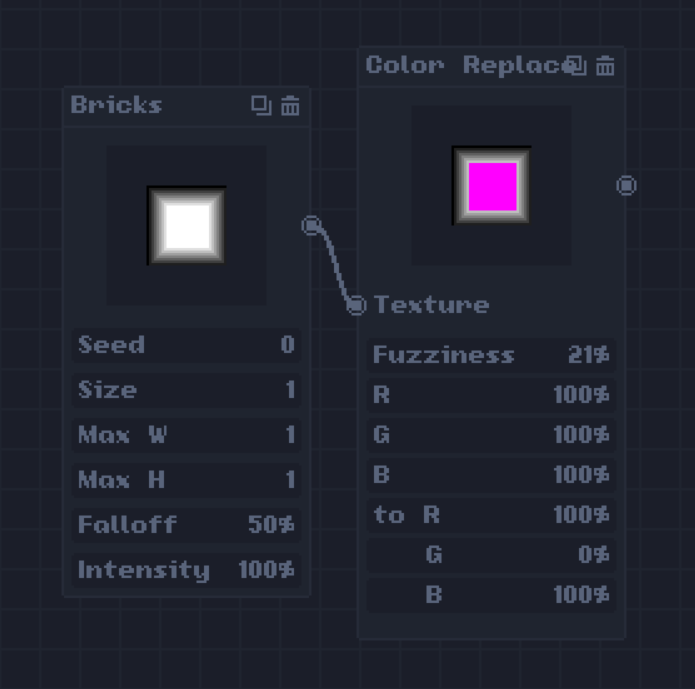 You can view the Lua in the Nodes folder https://github.com/LAGameStudio/Tilemancer-Nodes/blob/main/lighting.lua 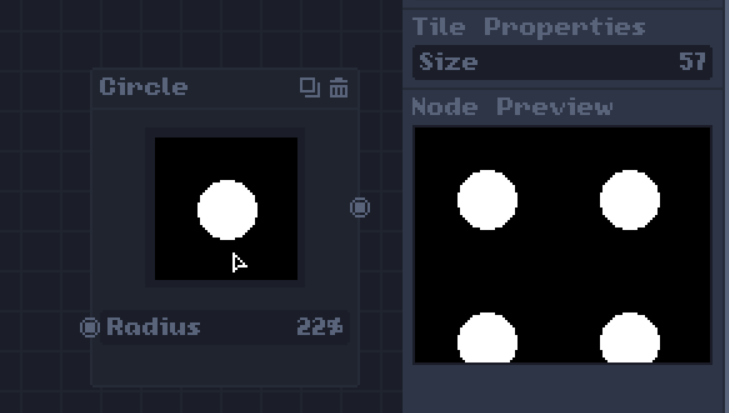 Reply
Tilemancer community · Replied to Ningow in Post your nodes below!
Lost Astronaut Studios1 year ago

sure, also please feel free to submit in a pull request 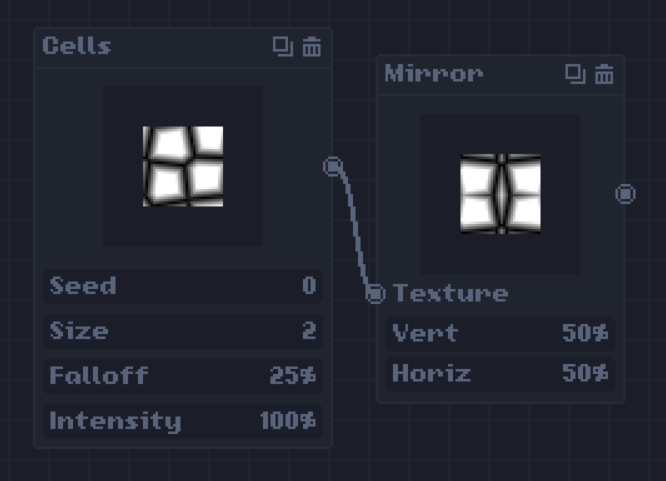 Here's Border, that is similar to XYCutoff but is a simple square border around a tile

Usage example:  (Border node format was refined after this, so takes up less screen space) 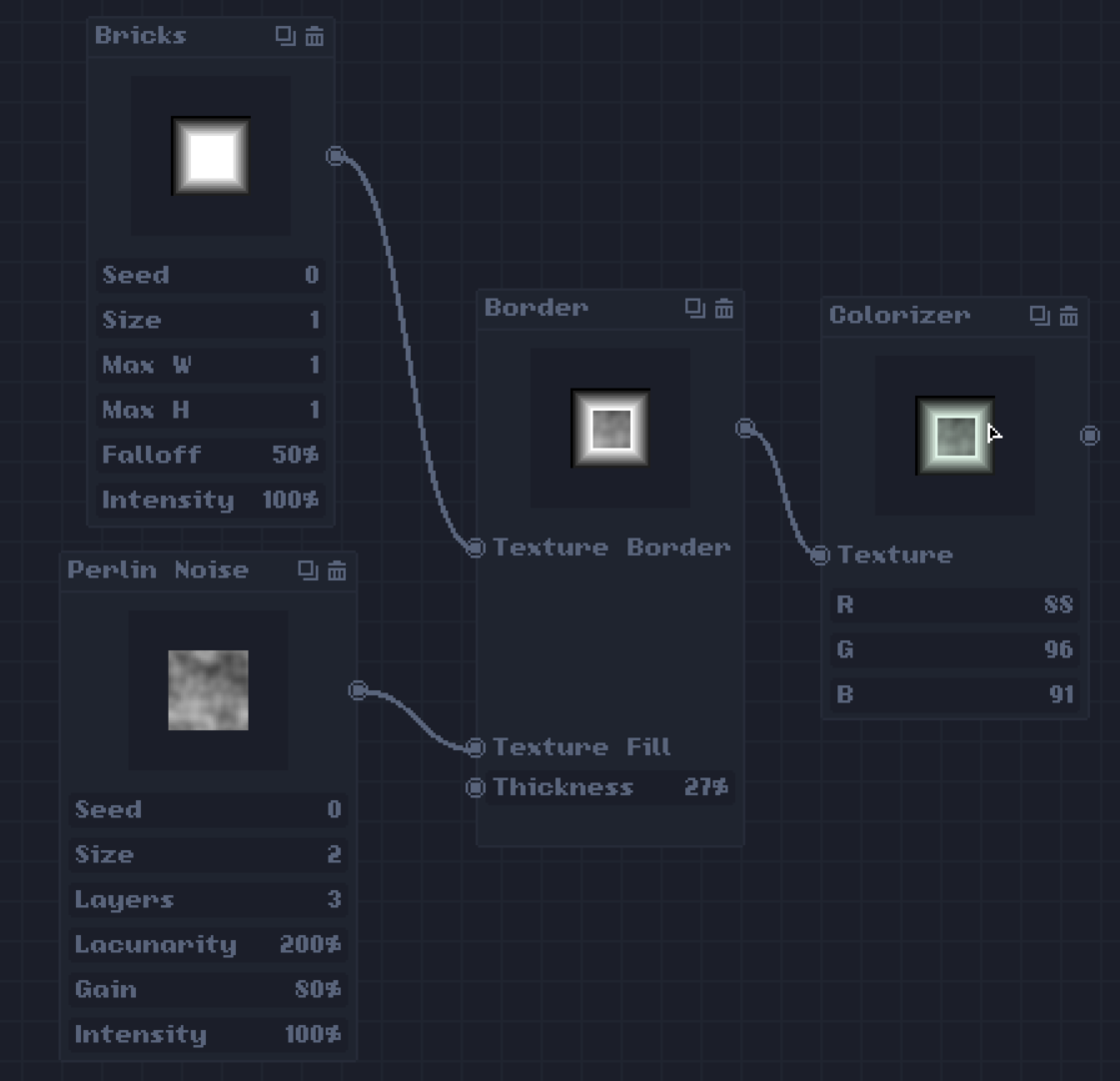 I noticed the Colorizer on my system did not work at all, nor did the "addCRamp", so I fixed it 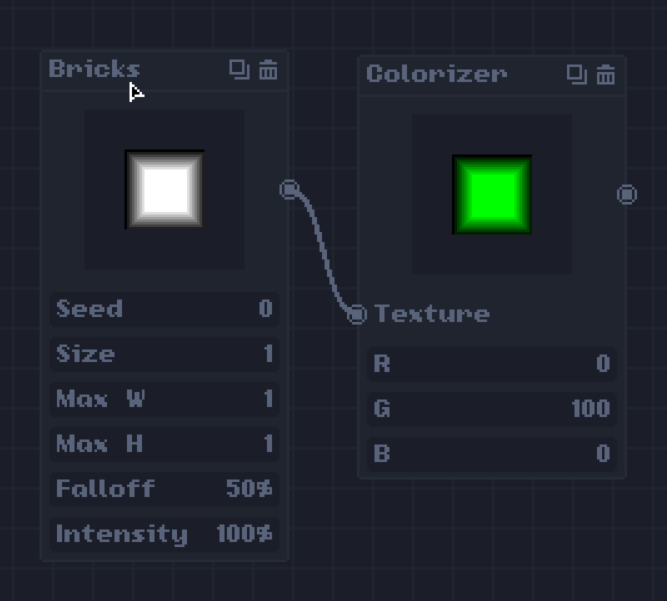 Normal Map  (not the same as the one in Lighting)

A way to create staggered bricks and other effects by creating repeating patterns from a source texture, and offsetting them. 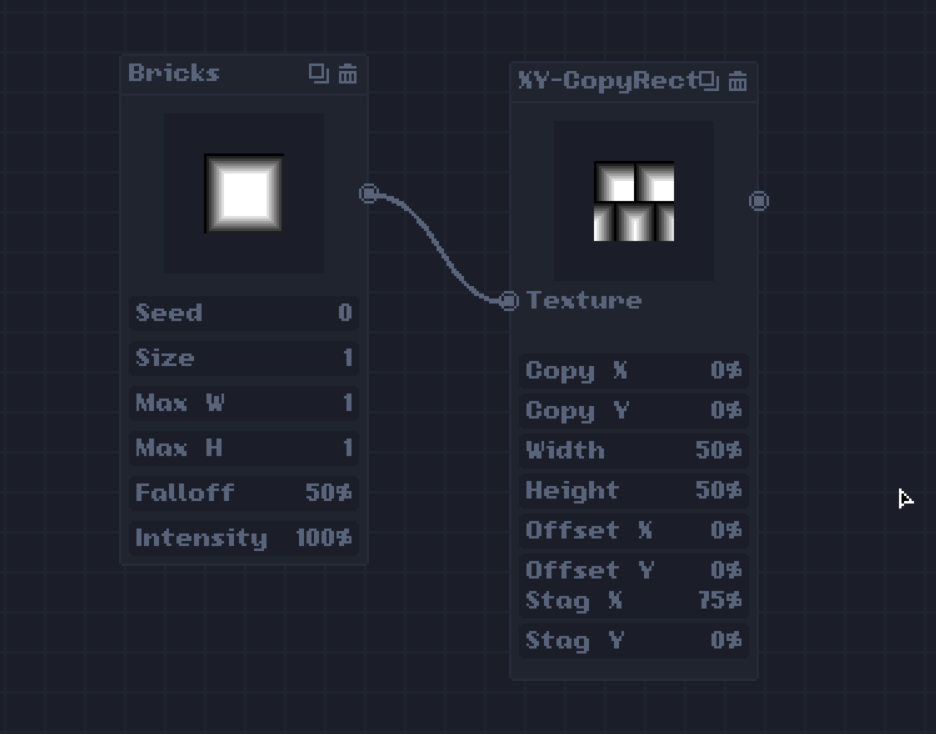 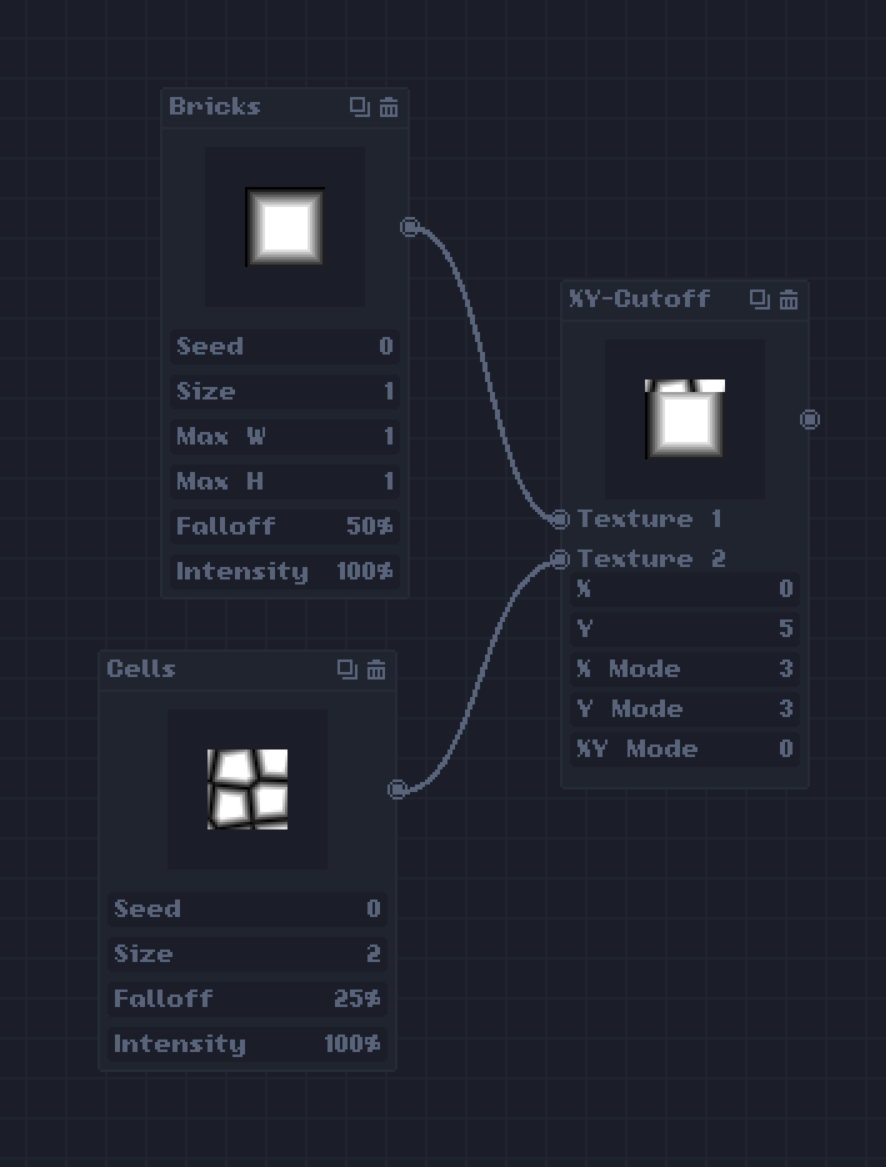 Reply
Tilemancer community · Replied to navot in Post your nodes below!
Lost Astronaut Studios1 year ago

As you progress through kills, you also advance the game mechanics and work your way through various planned rewards.

The game is procedural, meaning that the ship graphics and the way interactions unfold do not always happen exactly the same way. There are, though, certain specific kill counts that unlock specific rewards.

The first four generations are:

Did you know you can run Apolune at a variety of resolutions in Full-screen or
Windowed mode?

If you right click the application in the STEAM Client, you can use the
Advanced Launch Options to enter one or more options from the list below:

Please note that all of these options provided as command line parameters to
Apolune.exe should precede with a single minus sign (-).

For example, "-windowed" works but "window" won't work without the minus sign.

For example, to load in 720p mode in a window, enter the following into the
Steam client "ADVANCED LAUNCH OPTIONS" textbox:

Order does not matter, so this will also work:

-window Disables use of full screen when creating the application window.
-windowed Same as above.

-nolimit
Do not limit the frame rate (will speed up time on some systems,
otherwise the frame sleep will fill frames that don't take up 17ms at 60FPS

Support for Matrox Dual- and TripleHead2Go

Tips to Getting the Best Score
Try to minimize wasted ammunition. All ships can be hit in the very center within a circle diameter of 20 pixels. Some ships have other weak areas but they may not be predictable. Larger ships require more direct hits.

The larger your ship is, the more of a handicap is applied. A ship half the threshold decreases your scoring rate by half, whereas a ship twice the size of the threshold is worth 200% scoring bonus.

The term "Epigenetics" in the final score screen statistics is the amount of added up generations of all of the kills you have made. This also increases your score the higher it is. Ships with a higher generation will appear more complicated with more colorful configurations.

Ramming does not cause a shot to be recorded and is essentially a free set of non-moving bullets fired along the path you travel. This is also a way to avoid wasted ammunition penalties.

Take a screenshot of your score and share it on the game's profile on Steam to compare notes. Don't just click 'Again'! Catalog your scores and try to predict a better outcome based on your experiences. Take notes.

There is no real end to the game. There is no set generation at which it ends. At the 100th generation, the game begins to oscillate and may actually become easier for a time. If it is possible for you to survive long enough to reach the 100th level, 101 may not be as tough. The cap on active enemy ships is set to 200, but more can appear if they also bring "friends" to the party. This cap is reduced during the earlier generations.

Keyboard versus controller input: It appears that, in the early levels at least, it is easier to shoot quickly by typing both CTRL keys with your right thumb or left pinky.

Unlike the primary ship, the second player cannot be hit by bullets but also has difficulty controlling their exact location. If a game is started and less than 30 ships have been killed, a second player may join by firing with the Y or U keys (or controller mapping).

On a keyboard, this maps to the keys:
FTGH (movement)
JKLI (aim)
YU (shoot)

Tip: Just tap a directional to "push off" as the astronaut, rather than trying to fly.

There are three developer-created controller settings recommended by the developer, though you may create your own and anyone can submit them to STEAM.

The three created by the developer are:

Designed to be widely compatible with generic USB SNES-style controllers and the STEAM controller.

Designed to be widely compatible with generic USB SNES-style controllers and the STEAM controller.

This sets up the controller input to map to the Second Player (Astronaut) controls. If a game is started and less than 30 ships have been killed, a second player may join by pulling the triggers or shoulder buttons (fire).

Unlike the primary ship, the second player cannot be hit by bullets but also has difficulty controlling their exact location. Tip: Just tap a directional to "push off" as the astronaut, rather than trying to fly.

On a keyboard, this maps to the keys FTGH (movement) JKLI (aim) YU (shoot)

Designed around the STEAM Controller.

For die hard fanatics, you can attempt to control both the ship and the primary player ship. The commands are complicated and mapped out in the configuration, but basically function like this:

Spoiler: Specific Reward Levels
Once you reach 30 kills, you hyperspace to the second stage. Enemy ships will start to come faster and you will notice your directional movement increases slightly. After 30 kills you can no longer activate the Second Player option. If you aren't cheating, your personal score will be recorded in the 'regular' (single player) Global Leaderboards.

At 100 kills, enemy ships loaded with beacons can draw additional support craft if they are of a certain size. Larger ships will draw larger assistance vessels.

Jump Ability: After 150 kills, the "double tap" dodge/ram feature is activated. Double tap the directional to "jump" in a direction based on your rotation. If you "jump" through an enemy craft, you will hit them a number of times leading to a kill if your ship is strong enough and they are weak enough. The strength, duration and recharge rate of this feature will increase over time.

At 200 kills, you unlock the rapid fire weapon. This allows you to rest your weary fingers and spray-and-pray all you want, however the more missed shots the less the final score will be.

At 300 kills, you unlock the Triple Threat weapon (and the achievement, if you haven't earned it already) -- at 500 kills, it becomes a five-shot weapon (Quintuple Threat) and at 1000 kills

At 420 kills, your healing rate increases with each kill thereafter. The more you kill, the more you will heal.

At 1000 kills you gain a 10-shot weapon and at 2000 kills your weapon begins to aim differently, including backward fire. The final weapon reward is at 3000 kills.

Spoiler: Miscellaneous Nuances
Kill ships as far away as you can.

Stay in the middle of the screen and away from the edge at all times. You never know what is coming around the corner.

Probe unseen areas ("the darkness") with shots. While wasteful of ammunition it can help identify targets before they are too close and start shooting.

If you fly over a ship, it may confuse the pilot. This is one way to cause a ship to lose trajectory and it pacifies it. This "bug" is actually a feature: you can pacify ships temporarily if you are being outnumbered. It's counter-intuitive to do this. You will want to back away from ships, don't: it only causes them to fire more bullets.

Spoiler: Cheat Codes
Listen to the Space Game Junkie Podcast #277 for cheat codes and how they are activated, and what they do.

When you cheat, you will not be able to gain achievements that are not specifically for cheat codes, and no scores will be recorded to the Global Leaderboards. You will, however, gain a "Continue" button. Cheat codes help the developer test new features, and can help competitors practice and explore higher game levels. Consider it "experimentation" rather than "cheating" - which has a bad rap for a good reason.