I really enjoyed playing this! I made this character based off a recent drawing that I made. Playing this game was interesting and I absolutely LOVED the reference at the beginning to Dazai Osamu and one of the quotes in his book "No Longer Human". Charlotte seems like a really nice girl, Elliot is a mysterious student with a somewhat dark past (maybe?) and Francine seems to be a little bit suspicious with the way she talks and how she interacted with Elliot in the cafe scene. Overall, great game!

I actually had fun playing this game. Took me awhile to figure out how to play and most of them don't really discuss, they just vote random people. The game could be more polished, but regardless, I really enjoyed this.

Trying to solve the murder was a bit tricky since I had to refresh the page to read everyone's dialogue. I pulled out a notebook and started writing down everyone's statements.

Continue reading at your own risk! Contains spoilers about the identity of the murderer!

As I was comparing everyone's statements, I realized that the only prime suspects who I found suspicious was Mackenzie and Brrrrdd because Austin, Jess, Hazel and Kevin's accounts match each others' statements as all of them were mostly involved with each other (during the fighting). Mackenzie said Jess talked to Tim at 2:10am but Brrrrdd said Jess went to talk to Tim at 2:00am when she left the common area so this clearly contradicts each others' statements. So I looked at Austin and Hazel's accounts to find proof that corners Mackenzie as the murderer: Austin said that Hazel and Mackenzie disappeared before 3am while Hazel said that she went to take a nap at the quiet room at 3am and fell asleep (Hazel's statement is supported by both Jess and Kevin: Kevin said Hazel left to sleep while Jess said Hazel told Jess she was going to the quiet room to nap). Which concludes that Hazel is not the killer.

Brrrrdd said that she went to the workspace and stayed there until 3:20am. She went back to the common area after that and 10 minutes later, she heard Jess scream. I found this odd because Mackenzie said that he also went into the workspace and stayed there until 3:10am but he never mentioned about Brrrrd also being in the workspace with him (same goes for Brrrrdd). But Mackenzie never mentioned where he was or what he was doing during the last 20 minutes before 3:30am when Tim died whereas for Brrrrdd, she stated she went back to the common area. Mackenzie only said that he heard Jess scream at 3:30am, which led me to accusing Mackenzie as the killer. And as it turns out, it was Mackenzie all along!

Overall, it's a good game but it could've been more polished and executed even better but I still found it enjoyable.

This comment contains spoilers for the endings so please read at your own risk!

The whole time I was picking the options to save the woman, I was hurriedly clicking here and there while skimming through the text. I loved that there were multiple endings to this. So far, I got multiple endings such as 'Brianna saves you' ending, and the 'Woman Reported Missing' ending. That ending where she went missing gave me the shivers, because those cases can happen in real life too.

There was an ending where the woman became suspicious of Luke's whereabouts when her life was in danger so I played it a few more times to see where Luke actually was and apparently this is the ending I got: 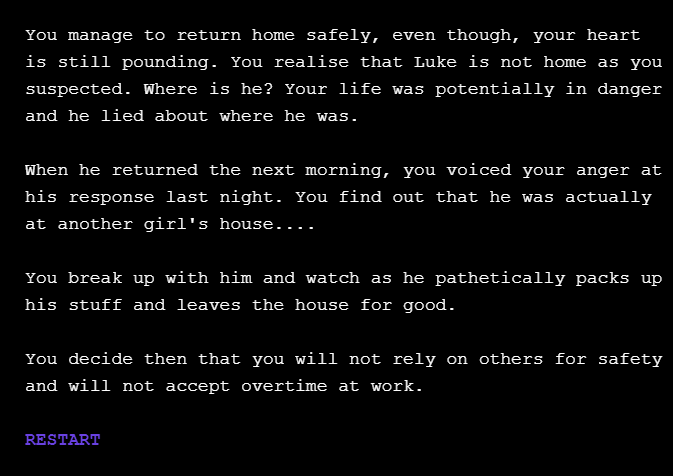 Well, turns out Luke is a cheating bastard. But overall, it's a good game with rising tension as the seconds count down.

The game is really fun and challenging. What took me by surprise was that the game said to 'process customers in a timely manner' which I guess means 'do your job faster' (I got too many strikes and got fired). But nevertheless, I enjoyed this game.

This is such an awesome game. When the error played at the end, it made the whole thing more believable.

Also when 'BADGUY95' texted "I can imagine. May I ask you something?", I knew right off the bat that whoever was texting wasn't 'Guy' anymore because (1) they sounded so formal, (2) 'Guy' would usually swear in their sentences and (3) 'Guy' previously wasn't using any capital letters at the start of their sentences (they did use it at first but that was before they noticed the man with the 'monster square face') because they were alarmed of the man's presence so it was weird for 'Guy' to suddenly become calm after the nerve-wrecking situation.

But again, this is such a short yet AMAZING game with a cool ending. 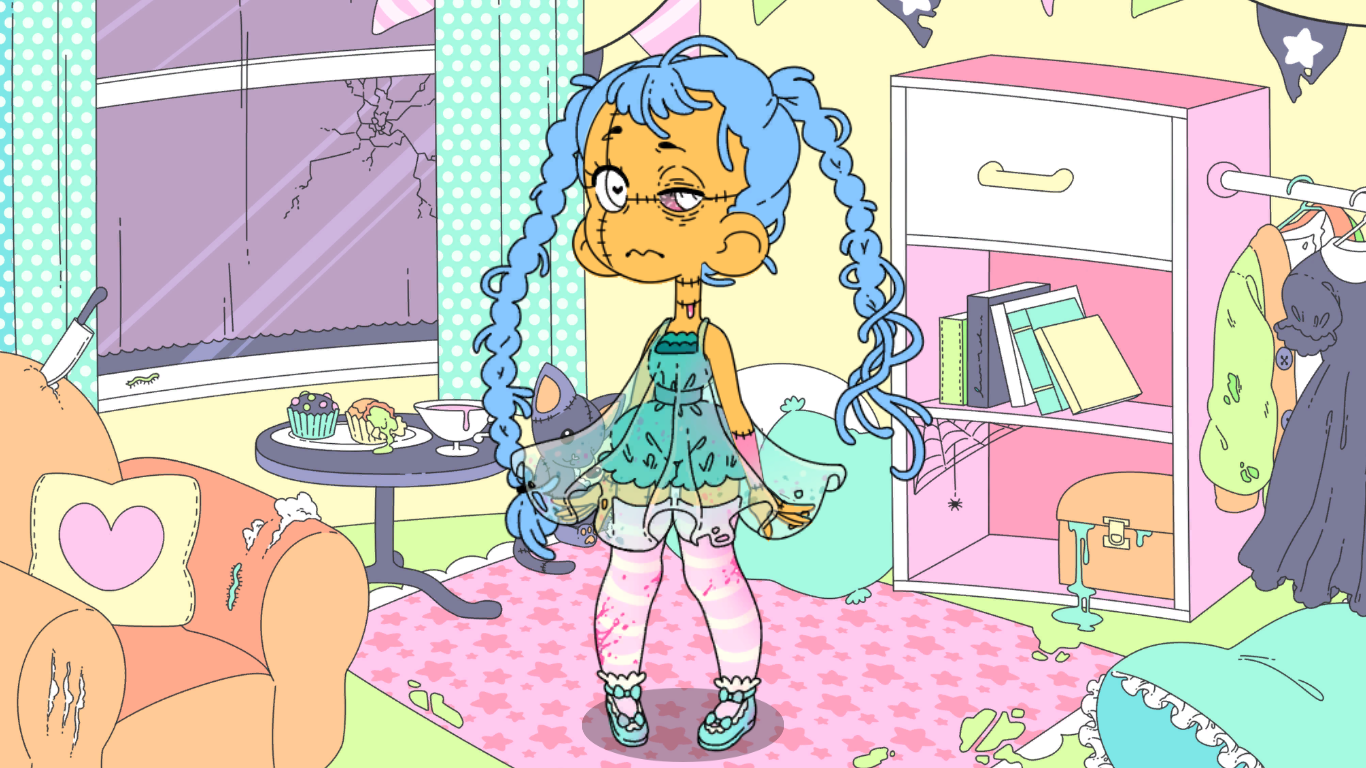 This is a really nice game! I really liked playing it!

This is really cool!

I absolutely love this virtual shrine! It's so nice and informative too! 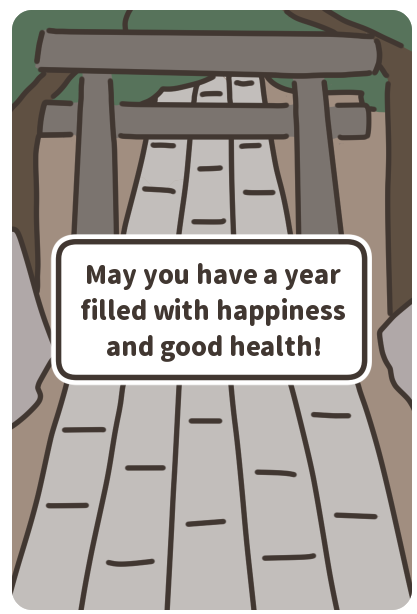 This is such a calming and beautiful game. I loved how  creative and unique the text was used to progress further throughout the game.

It was a really cute game and the music was also a good choice. It's such a sad yet sweet game at the same time.

Just finished the story and I have to say, the game is really cute but the ending was so WHOLESOME!

This is an amazing game! I actually felt like I was a programmer doing all the coding during the whole thing especially with Joey walking me through it, which made it more realistic. Loved this!

This game described anxiety really well with the narration. I really liked how you interact with your surroundings in various, especially the part where you're walking upside down and words flicker on the screen. This made me think a lot about myself afterwards but overall, amazing game.

A really compelling story that was well executed. The art goes well with the story and it gave me somewhat creepy vibes but in a good way. This game gave me such an immersive experience.

It's a short game but it's cute. I also really like the background music, it sounds so calming yet festive. Loved it!

This game was really well executed and it has a fantastic concept. I enjoyed asking Manuel different questions to see his responses. It took me awhile to get the ending, but it was worth it. I have to say, seeing Manuel give me various types of answer regarding God was a bit trippy for me and it definitely had me thinking for awhile after completing the game. This game gave me such a wonderful and immersive experience.

Really loved playing this game! The art style is so cute and while I do enjoy doing the tasks, it sometimes gets a bit repetitive. I actually have a lot of theories regarding the ending and gist of the game. But in the end, I enjoyed playing this.

I just finished playing this game today and it was such an immersive experience for me. I love the fact that you can change to different camera angles and that there was a chat implemented to monitor the whole situation of the protest which is a really nice feature. This game made me worry about the choices I pick and what would be the result of the choices picked, as I was honestly worried about what could go wrong in the protests.

The music itself added tension to the atmosphere as it escalated to an emotional stage that added more depth to the story. In conclusion, it's a compelling game with an engaging storyline and I loved every bit of it.

This is lowkey relatable in so many levels and is that a Yuri On Ice reference? Because two characters look like Victor and Yuri.

"Thanks, I call the left one Bob."

This is so cute and wholesome that some of their conversations had me BLUSHING! 😍 Honestly, I LOVE THIS SO MUCH! ❤️❤️❤️

I really liked playing this game as the gameplay mechanics were so simple to understand. The music is really calming and I honestly like the status mechanics implemented. Nevertheless, nice game! :D

This was a really neat game with simple mechanics. I had fun playing it, although I'm not sure about the meaning behind the ending. I just realized that the title of the game 'Kissa' is in Finnish for 'cat' which I thought was a really nice touch. Overall, it's a short but fun game.