Yeah, that's a reference to a chapter that never got out of draft, (it's still bubbling on the back burner, but didn't cook up for this version).

It may well appear eventually, but...   Yeah.

I've been considering doing tools and weapons together; nothing like an adjustable wrench with a fightin' hammer on the far end.

Fair; it has gotten fat enough to use one...

Thanks!  I'm still tinkering on Treasure/Gear (the version given has all the right *pieces*, but it feels a touch... muddled in presentation?), and I'm messing with making a form for setting summaries, but otherwise I feel like it's ready to roll.

Thanks!  Going to try and do the same for sorcery at some point, and do a little booklet of rituals; I feel like those did not get enough coverage in the main rules...

Wyrds giving good luck was on my mind when I was puzzling out the project, but got set aside because a *lot* of the systems Witchery might be applied to are very light, low-numbers stuff, which break very very easily under heavy bonus stacking - and being able to bless and curse, both, means that such stacking would get *really* accessible.

I figured I'd come back to it and try and solve that, but never came up with anything satisfying.

Okay, I think I can safely say at this point that the material itself is working fairly decently (and I'm interested in this world, even), but... This isn't much fun in Play-By-Post?

It feels like work, since there's no banter over the choices being made, no tossing ideas around loosely; it's just a bit of a slog done this way.  It would need a different framing for "How to run the game in PbP".

Rather than asking everyone to slog through, I'm thinking I should get myself a live test of the current stuff, then write up a streamlined PbP procedure, and come back fresh.

Anytime!  And, yeah, it takes a little extra thinking, like, I want this effect, that's Element-Art, but which Conduit?  But *most* of the usual fantasy magic effects are doable with a bit of messing around.

I mean, you can add as you like, but the pieces are already right there. Here:

The Taglock for this spell is the ashes left behind from a bonfire.  A pinch of these are drawn from whatever pouch, and exhorted to remember. They are then flung away as quickly as possible towards a target, as the ashes transform back into the flames of that fire for a few moments.

It does pretty much everything *I* want out of a magic system, so it's nice to hear I'm not entirely alone in that!

Note: If you're ready to get into material culture, go straight on; we are plenty spaced out already.

The ultimate version is, like "Some mechanics inspired by the Deck Of Rules, by Levi Kornelsen [link]", but any portion of that is still lovely.

There's no real cause that I can tell.  Mechanics themselves can't be copyrighted, only the specific expression of them.

And if you're using these mechanics in a game and publishing it, I would strongly expect you'd be rewriting the text at least a little when you integrated all the pieces, which takes you right past that.

So there doesn't seem to be a reason for one.

No reason not to, beyond the obvious "most cultures have multiple kiths".

Ah, bugger; misread something there.

So, pre-history goes on for however long, with various lifestyles and proto-cultures getting a try (looks like the original Striga had a pretty good run at it, too). Out of this, five patterns for living will be the most successful - the cultures we're about to build.

Now, we want a good spread of "How many Kiths in a culture at its foundation", so let's use that as our springboard. The spread will be:

Note that the fact that that a kith is *represented* in a culture doesn't necessarily make it *common;* demographics can be pretty skewed.  So, pick a map location, and declare how many Kiths (and which ones) are in the culture that is being founded there, and what they are - keeping to that spread above.  A format for you:

(The order of kith listing IS demographics: Abratu, Jotnar = More Abratu than Jotnar)

Try to aim for mostly landscapes and Kiths you didn't place, but that's relatively relaxed; just, don't be hiding in a corner with your toys.

Also try to spread these out a bit, if possible; look where others are founding.

Grab a culture sheet or just a piece of paper and sketch out your culture following the book right up to, but not including, language; stop there.

For subsistences, use one from each of your founding kiths, and then add one more (yes, this means cultures with more kiths get more subsistences).

Don't get into heavy detail with it yet - post the fast version up, and if there's too much overlap between any of them, or something like that, we can correct it before you're too set on the results. 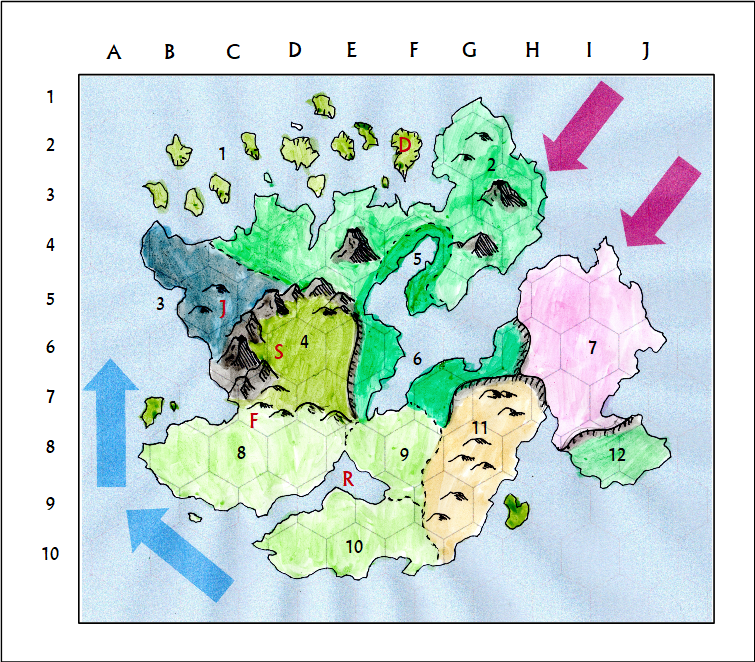 .....And we're set to get into the deep weeds with culture creation!

Post on that maybe tonight, maybe in the morning?  Depends on toddler!

(Also also, if any of your test ends up public, let me know where, so I can pore over it and also point people at it.)

Not yet?  I'm *hoping* to find time to get together some form-fillable sheets and similar after it gets out of early testing, but right now everything seems too likely to change after any test for me to want to make multiple formats.

Also, fair warning: For a solo test, if you go past about four cultures, Oh God There's A Lot.  Even at that level, it's pretty dense stuff.

Yeah, this (probably) isn't going to be one of the lasting cultures - this is how prehistoric striga lived, to the extent that it's remembered.  So building a lot is likely to just be a waste.

This is probably fair.  Over on the RPGnet side, our biome discussion included a bunch of rivers, but only one (which is huge and explicitly Amazon-like) went on the map.

Point; I vaguely recall thinking I should put an exception in there for Striga, and never did.

Also, no need for names yet - There are actual languages coming up in the culture section, and the endonyms of these original proto-cultures may or may not even be known.

(Careful with the present tense: There's a good chance these proto-cultures will already be ancient history as of the next step.)

(EDIT: This is basically the perfect amount of information, though.  *Chef kiss*)

Onward we go!  This stage should be relatively quick, but I'm going to beef it up slightly from the book to test something I've been considering adding in to the book proper.

Pick one of the Kiths, post the name of it here to reserve it, then grab the book and...

1. Figure out where on the map you think is a good place for their origin site. This is the place of their before-our-history-begins existence, not the one they'll have when regular history rolls in.

2. Flip over to the culture section and pick a subsistence type they practiced in simple form in those original times. It probably wasn't the only one they practiced; it's the one they will carry forward into known history.

3. Tell us where that origin site was, as an area, and what the subsistence was. If you want to throw in details on things left behind in abandoned camps/sites, please do!

1) Is the whole island chain; shrublands biome with loads of caves, underwater passages.

5) Is a bay lined with wetlands forest - huge trees that grow right up from the water, like  mangrove/cypress/baobabs; vine-covered in many cases, and big enough to build a house in their branches. 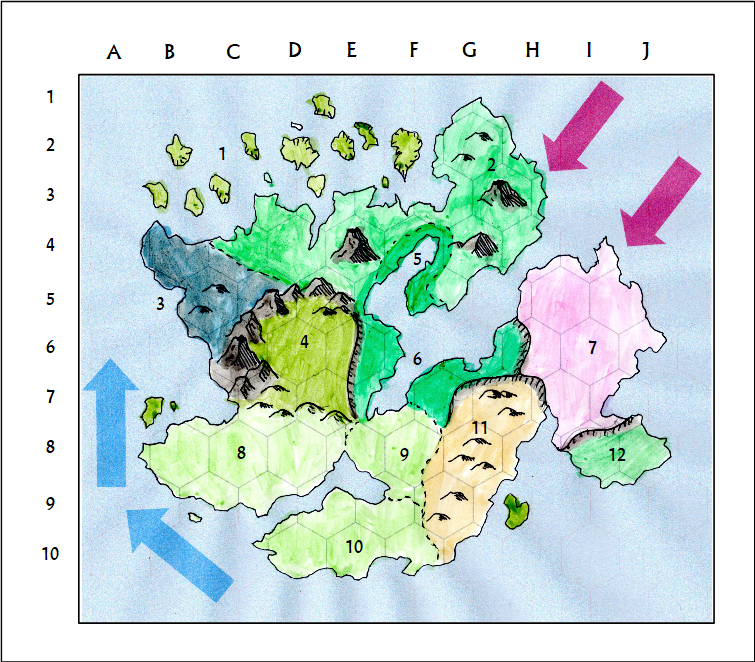 There's a cave-laden woodland on the south end of the big bay, so I'm going to move the wetland forest with trees you could live in up to the north of the bays.

Which makes it almost entirely shielded from ocean weather, but a *bit* of a sail inward for a coastal port.

On the other hand, giant trees, easy weather: That's a shipbuilding hub waiting to happen....

I will be adding your bits in!

New map, probably tomorrow, and we'll be moving towards Kiths!

I'm going to want to make this nicer later, but for drafting purposes, just grabbed some pencil crayons and blocked in the various biomes, as well as adding a couple more to fill in the gaps. 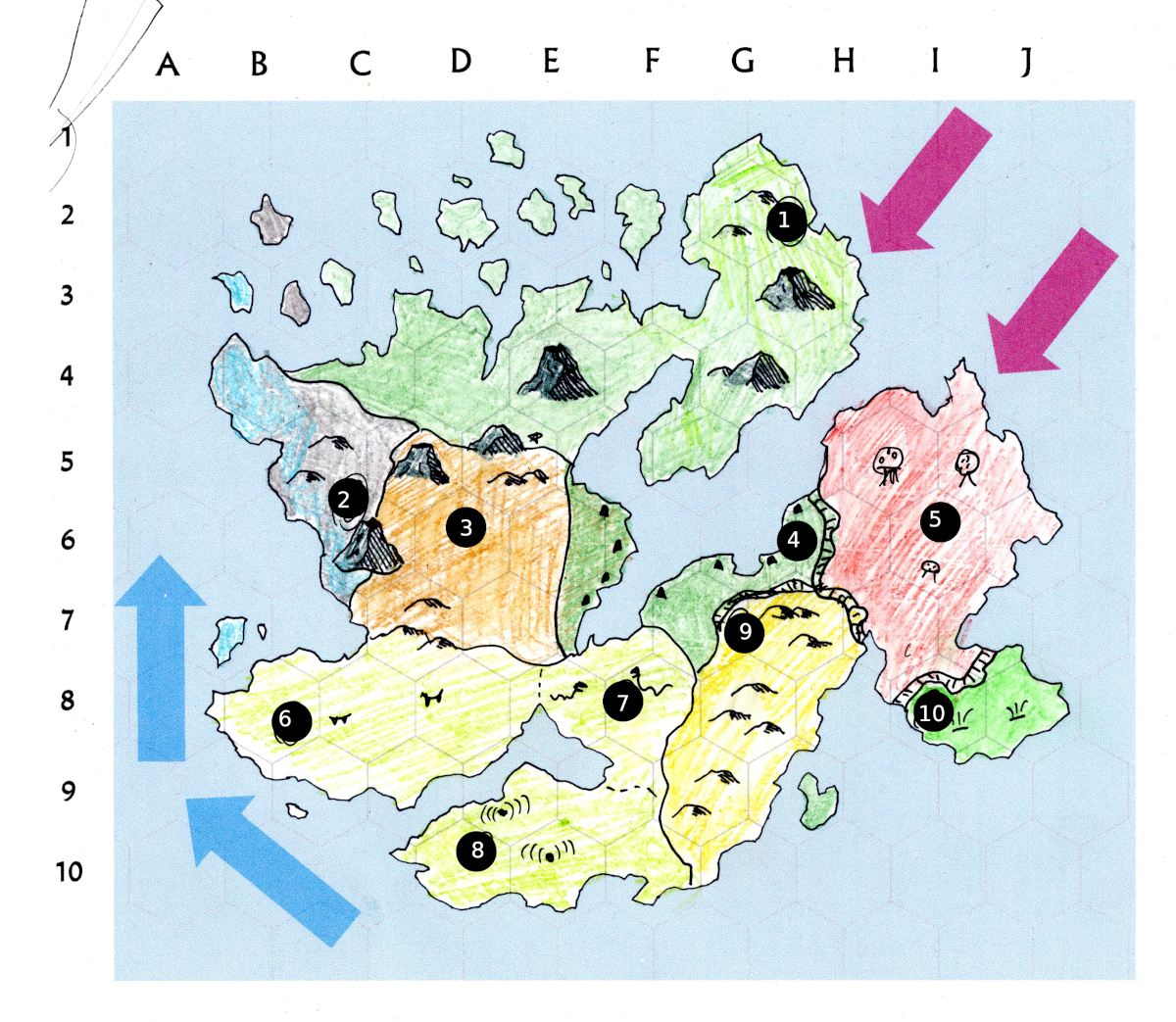 1) (My first addition) Is a huge northern forest, shading from a fairly hot rainforest at the very east coast to a much more seasonal, temperate mixed forest in the west.  Two notable features here.  First, giant flightless "kicker birds", which...  Imagine that a lovely purple chocobo had babies with a rabid, hateful ostrich.  They'll potentially be very useful to someone, but they are filled with malice.  Second, down at the border with (3), those mountains?  Just completely chock-full of jade.

2) Is the ice wastes, with the giant frozen birds (possibly a larger flying relative of the kickers in the forest?  Dunno.)

3) Is the scrubland of the interesting (and sometimes wandering) stones!

4) Is forests extending up from the inner sea there.  These are riddled with caves, many flooded, and groan with winter ice.

5) The mushroom scrubland!  Notably, the weird little border I put on that is to mark "Elevation change", just so that biome border makes sense; I imagine the mushroom scrub as a plateau with a high western edge, tilting down toward the sea in the east.

6) (my other addition) is overall quite cool, getting none of the warm wind, nor any of the underground heat the rest of the southern grasslands benefit from.  Like (7) and (8), there are large grazers here, and like (8) they are hunted by large cats, though the cats here get enormously furry in the cold seasons.  There are outcroppings of quartz in the northern areas.

7) Benefits from both the warm winds and presumably some of the geothermal activity so evident in the south; the winters here are largely just dry, not snowy.  This climate is ideal for the snakes that infest the area, which drive off a lot of other wildlife, excepting the shaggy beasts, which grow huge here (because they live longer?  Because they're a wildly different species?).

9) Is the desert with the huge huge lizards; I'm going to suggest that with the elevation change I threw in to (5), it's likely partly a desert because it's in the rain shadow of that plateau edge.   Also, hey, does this share poisonous snakes with the bitey part of the grasslands?

10) Is the foggy boglands; it's down below the plateau edge of (5); very much isolated, this.   It kind of feels this might be a chunk that broke off the (5) plateau, maybe?

So, look at where your biomes are, their neighbors, and so on; is there anything you want to add to your biomes given this map, or any crossover you want to check in on with the other biomes?

(For myself, I'm like, I feel like all the shaggy herbivores in 6,7,8 should be related, like, could these be Aurochs of different varieties?  Maybe with, like, more horns, just because that's a fun look.)