CAPITAL
"A society can no more cease to produce than it can cease to consume."
Kirby Baird
Role Playing
Play in browser
Apple. (Or, A Game About Disgust)
Kirby Baird
Adventure
I Need You To Rebuild
A visual novel about nationalism, espionage, and dating your coworkers.
Kirby Baird
Visual Novel

I'm not sure if I'm experiencing a glitch or whatever, but I can't go anywhere except the room or the balcony. I assume I'm supposed to go to sleep, but I can't interact with the bed.

Wow I played this for hours on the 360. I was so hype to find the DX version in that BLM bundle

Dig it. Dig the colors and pulsing background and the driving around blowing up cop cars. IDK if this was intentional or not but were the bullets the car shoots supposed to be invisible?

I don't think the goblins are registering being slashed by the sword.

Hey fellow Ren'Py dev! I'm about five minutes in and love what I'm seeing so far, but I've got a game-breaking bug here that I can't get around. 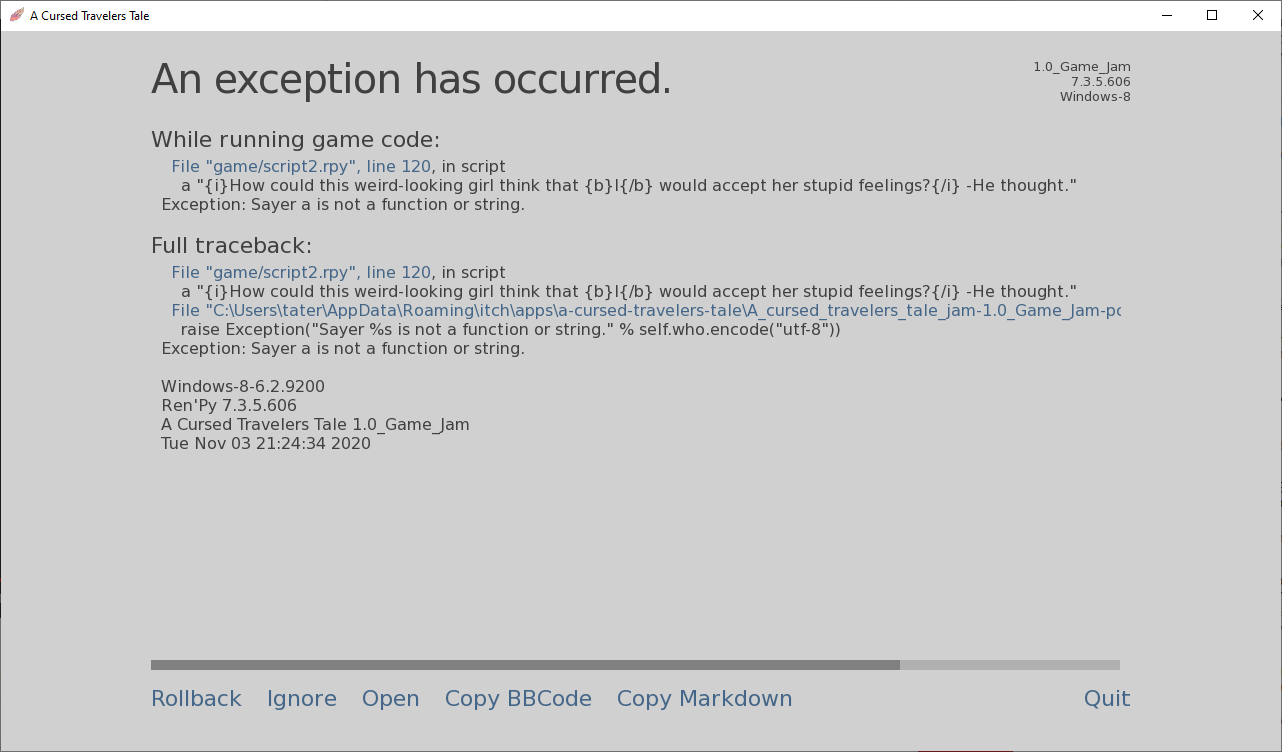 I look forward to checking this out again later!

Just made it to the fourth sister's stage, and had to take a break to tell you that I am loving this so far! My one and only complaint is that most of the animals are way too cute for an old lady to be walloping on, I wish there was some sort of in-text confirmation that Astrid is just beating sheep with her purse or something until they lose interest in fighting.

I'm really enjoying it so far! Quick bug note though, after the character smokes their first cigarette outside, if you stay on the sidewalk while you walk (like a good citizen) then you won't trigger the next events with the birds.

Press E to shoot. Just in case anyone else is looking around the page for a list of controls.

I really love the concept of this! I had a lot of fun defending my cultural heritage against colonialist meatbags. I would have played it longer, but the keyboard controls are pretty frustrating. Also I encountered a couple glitches where boulder behavior was pretty weird. Like for instance, pushing a boulder off of a ledge as far as it would go but it still wouldn't fall, then only when I died and respawned did it finally fall. Another bug I encountered is with a dirt block surrounded on both right and left sides by boulders, if I stood on top of the dirt block and dug it out then the two boulders would both be pulled into the now empty space and trap me.

Issues aside, this is one of my favorite Devtober entries I've played so far, and I hope to see more from it in the future!

This is about 15 seconds into the game, and the executable is broken at this point. 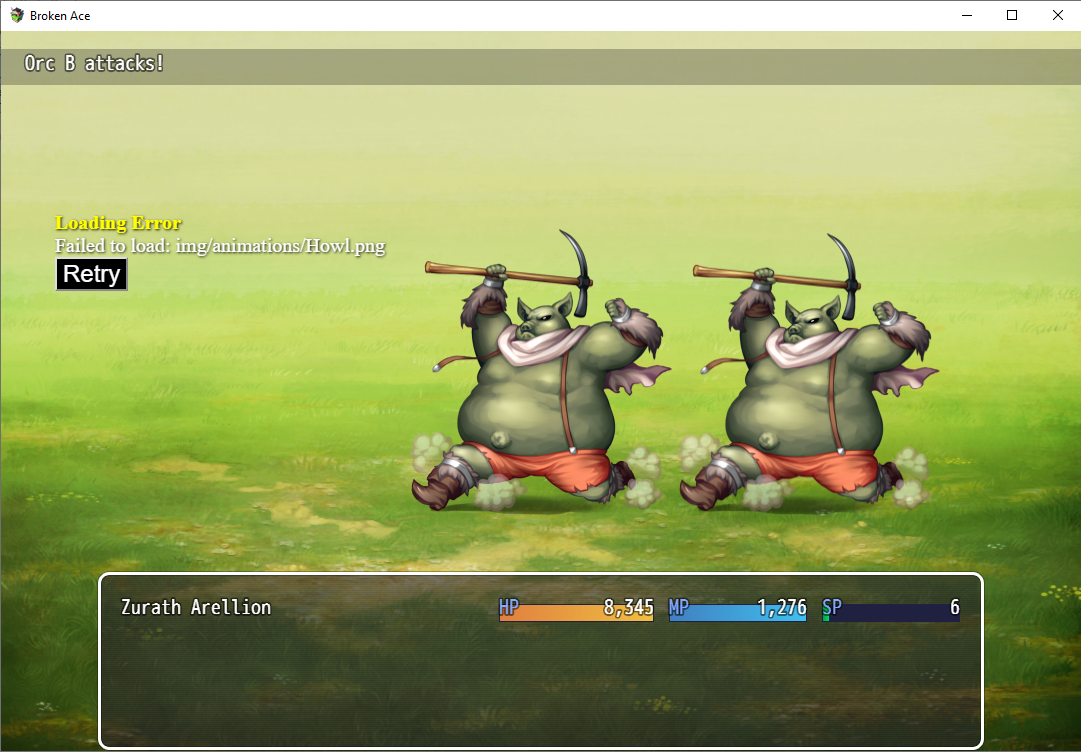 Also, you should put in the description somewhere that this is an RPG. I had to download and open the game to figure out what kind of game it was.

I dig the soundtrack and the palette changes between levels. I'm less sold on level randomizers though, as it pretty much means any Bit Trip Runner stage is going to freeze you mid-jump over a chasm. Also I had a bug on the Standard mode stages where some platforms would basically not count as a platform if they were low enough. Still enjoyed it though, and will be watching this one's progress.

Tried to open the executable, got a "Fatal Error!" message. Lemme know when you get it patched or have a workaround and I'll try it again.

Hey fellow Devtober Dev, I really enjoyed this one! These days if you're going to do a 2D plaformer you really need a hook, and danged if "You're a roomba on a trash planet" isn't a pretty good hook.

Anyway, I'm gonna follow this project because I really hope to see more of it! Great job!

I'm told that post-mortems usually include a list of five things that went right and wrong each. Let's try that.

This was the number one thing I wanted in the game but kinda thought wouldn't be possible at my level of programming knowledge (basically zero). I'm super psyched to have this working now.

This one was a little more vital but not quite as programming intensive. The Free Time mechanic allows the player to spend one-on-one time with NPCs at set intervals in the story, and to choose which character they spend it with. I go into this more in the devlog.

Rather than just a normal linear story segment, this scenes allow the player to explore an area at their own pace, and discover the narrative in a non-linear fashion.

In addition to the exploration scenes are Puzzle Scenes, where players have to figure out a puzzle before continuing with the story.

Vanelle Marin finally makes her debut in one of the new chapters, which I've been waiting to do for quite some time now.

While I had the rough strokes of each scene planned out long before writing them, the scenes themselves expanded and became much larger than originally anticipated. This led to scenes needing much longer time than initially anticipated to both write and bug-test.

2. Wasn't able to finish Chapter 3A

Due to issue one, I wasn't able to reach the planned end-point of this chapter.

3. Wasn't able to finish Chapter 3B

Same as the point above, I wasn't able to reach the planned end-point of this chapter.

4. The opening scene is dated

This is a game jam, so I limited most of my efforts towards the creation of new content rather than the revising of old content. The opening scene is one I am no longer happy with, and will revise after the game jam is over.

As always, these backgrounds and character portraits are scratch graphics to be replaced later.

I joined this game jam without much forethought, but now this is the furthest I've ever gotten on a video game. I'm pretty psyched about the work I've done so far, and plan on continuing this until the story is finished.

Oct 29: Whoops, I was under the impression that the jam ended on the 31, not the 30. Just getting in one last hurrah of writing and bug fixes. Will produce a build soon.

Oct 28: Getting down to the wire now. Just cramming in as much writing as I can before Saturday's submission.

Oct 26-27: More writing and bug fixes. Some weird new bugs have been popping up, just as an end result from story paths branching out more and more. This is officially the furthest I've gotten in any videogame project. Neat!

I dig the atmosphere, but was there an ending? I'm not sure if something happened and I missed it, or if it didn't trigger somehow, or if it was supposed to just end like that.

Oct 21st-25: Lack of updates are not because no work has been done. Rather, all the updates would sound the same. I've been writing, shoving that writing into the game, and debugging the new scenes from there.

I'm excited for my progress, but a little bummed that it doesn't look like I'll finish both current chapters before the end of the month as I had previously planned. Every scene in these chapters ends up being so much larger than I had originally anticipated.

Oct 20: Some of my writing involving spy stuff needed to be rewritten, as I learned new stuff about how shortwave radios work. Silly me, I was under the impression that numbers stations worked on FM frequencies. Once I learned more about it, certain scenes had to be rewritten. I know very few people (if anyone) would have noticed or cared, but I would have known and it would have continued to bug me.

Oct 19: Still writing. The more I write the further away the finish line gets. Still gonna stay positive about it. The goal is still to get the current chapters finished by Oct 31.

Oct 18: More writing. I think for this last leg of the jam I need to stick to focusing on writing the core story only, with music/graphics taking a back seat until after the jam. Even the Free Time modules gotta wait if I want to finish Chapters 3A and 3B before Oct 31.

Oct 16: Spent most of the work today stripping out old placeholder music and replacing it with open-license music, then creating a comprehensive list of credits to include with the game's distribution. I'd love to include a jukebox feature with credits that pop up at the beginning of every song, but it's not necessary for the Oct 31st build so that feature is just gonna have to go on the backburner for now.

Oct 15: Been writing today, with a side of bug fixes. I'm at the halfway point for both chapters 3A and 3B. My goal is to have both chapters finished by the time Devtober ends. 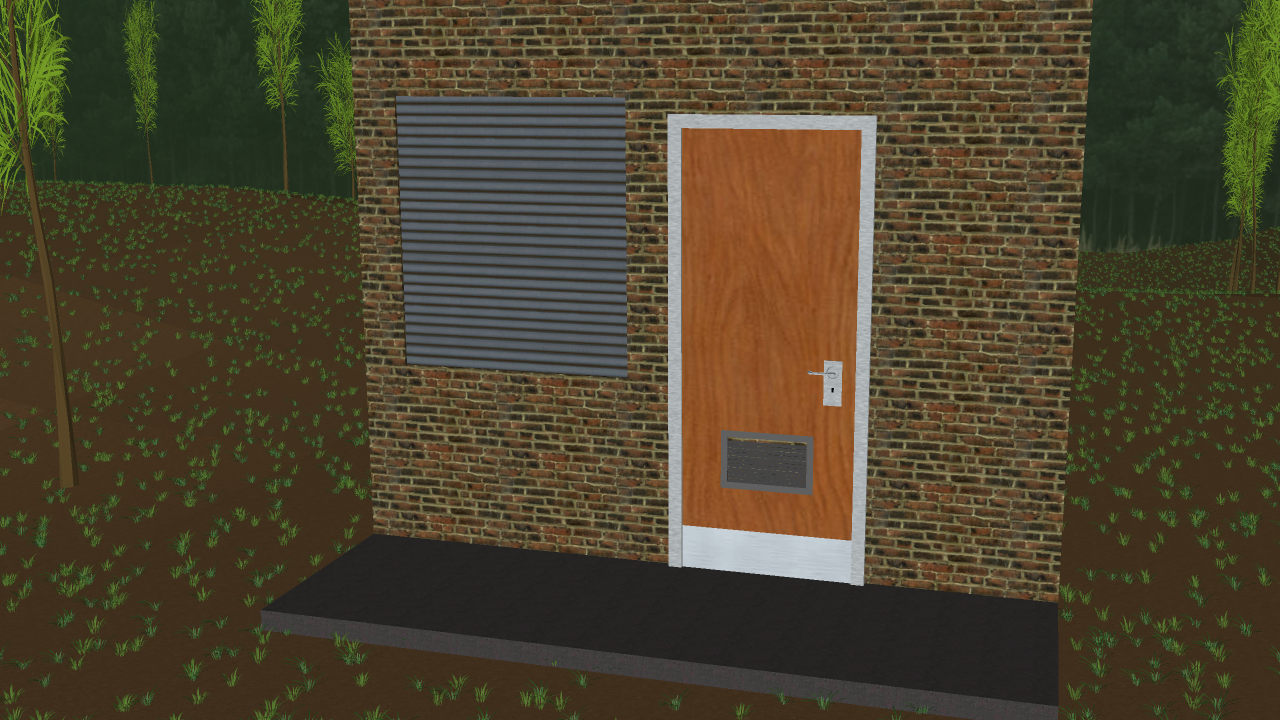 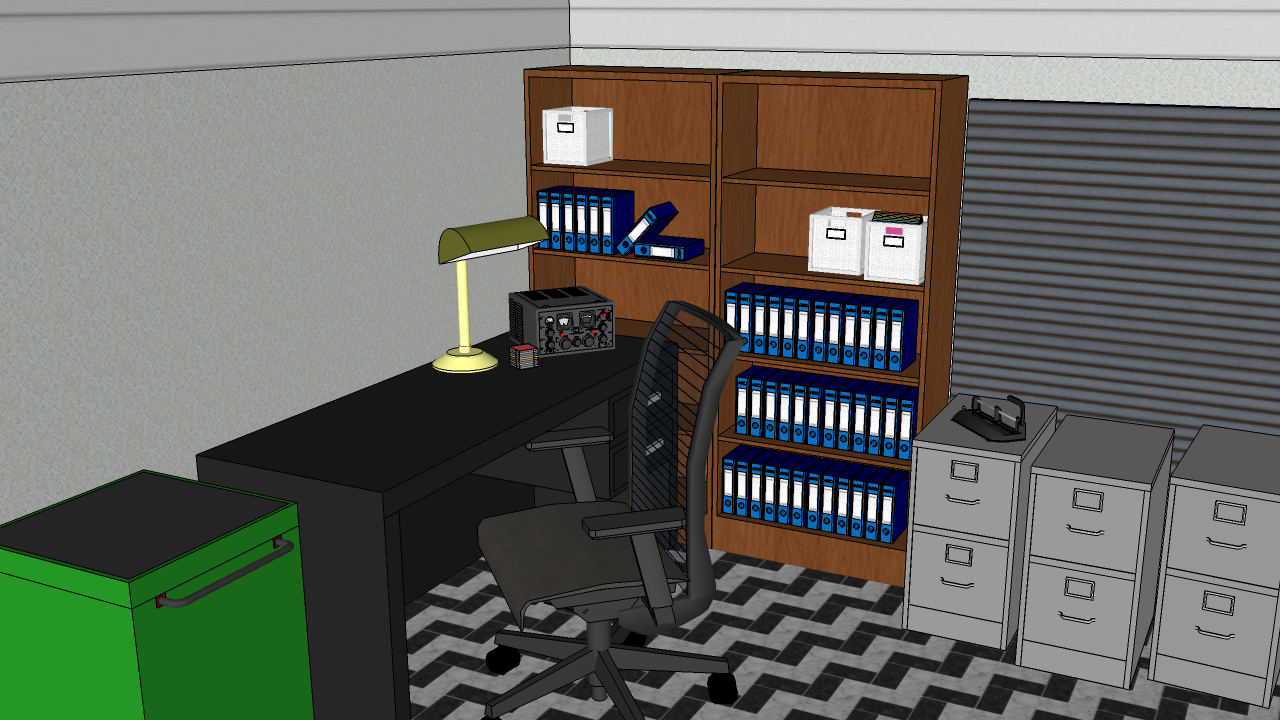 Welp, this is wild.

Oct 13: Wrote and programmed the first Escape-The-Room section of the game. As puzzle solving isn't the main focus of the game I didn't make it quite as challenging as a fan of the Zero Escape series might want it, but it's just challenging enough to let the player know that some puzzle-solving may be necessary.

Oct 12: I've found that rendering the scenes in SketchUp helps me flesh out the scene's writing. Got a few new backgrounds rendered, and with it came a few extra scenes and concepts that help make the world a little more dynamic. Also wrote the game's first Bad End today, so that's fun.

Oct 11: Writing new entries for the Messages and E-Reader thing.

Oct 9: I am very excited to say that I finally managed to get the Encyclopedia plugin working! Y'all have no idea, I've been trying to get this to work since AT LEAST 2016. 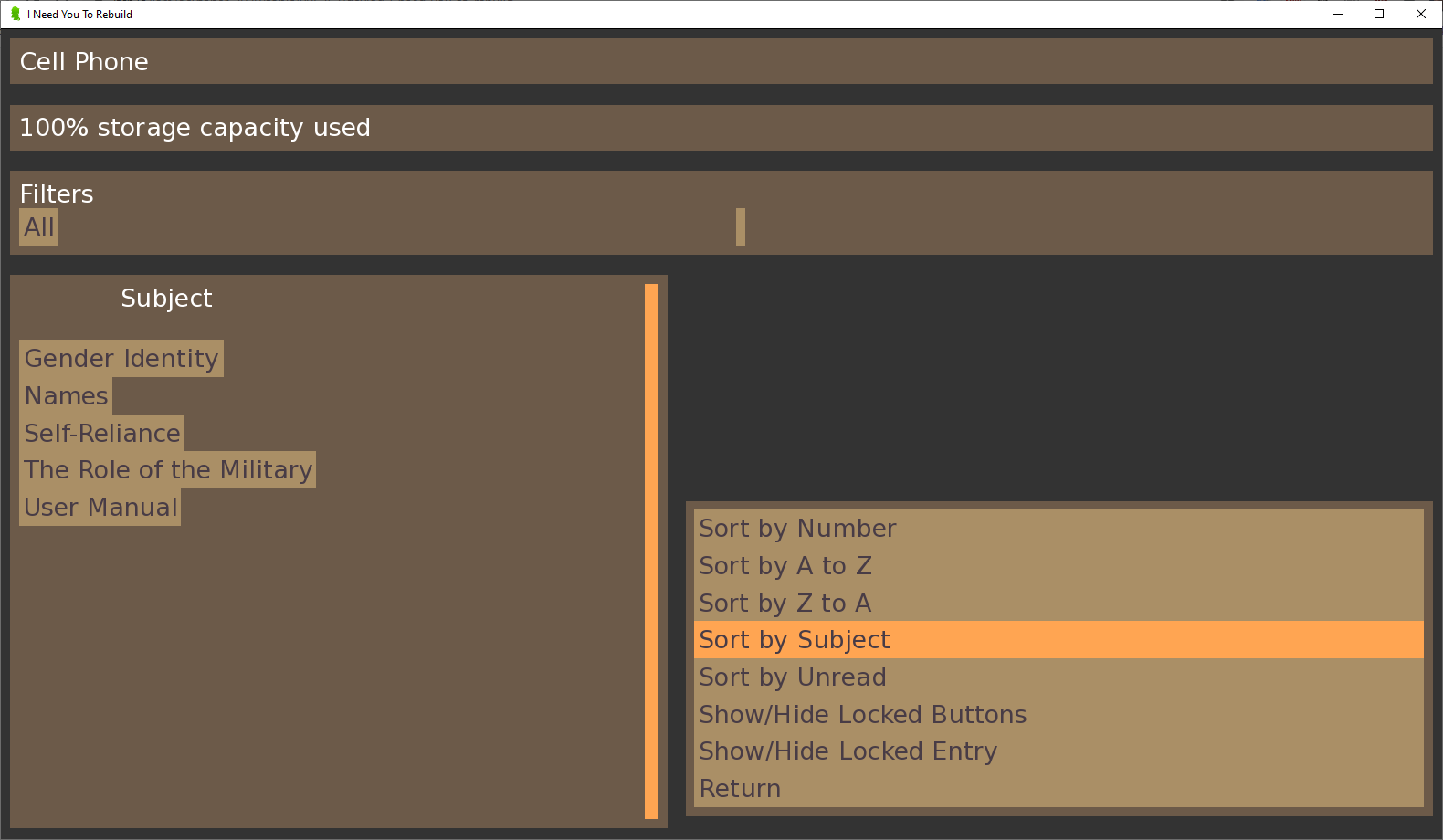 The player gets a cell phone with a built in E-Reader. This functions as a Codex which allows the player to explore extra lore of the world (while keeping it entirely optional if that's not your bag). Talking to NPCs about the customs and practices of this country will unlock excerpts from in-world books that can be accessed from your E-Reader at any time. 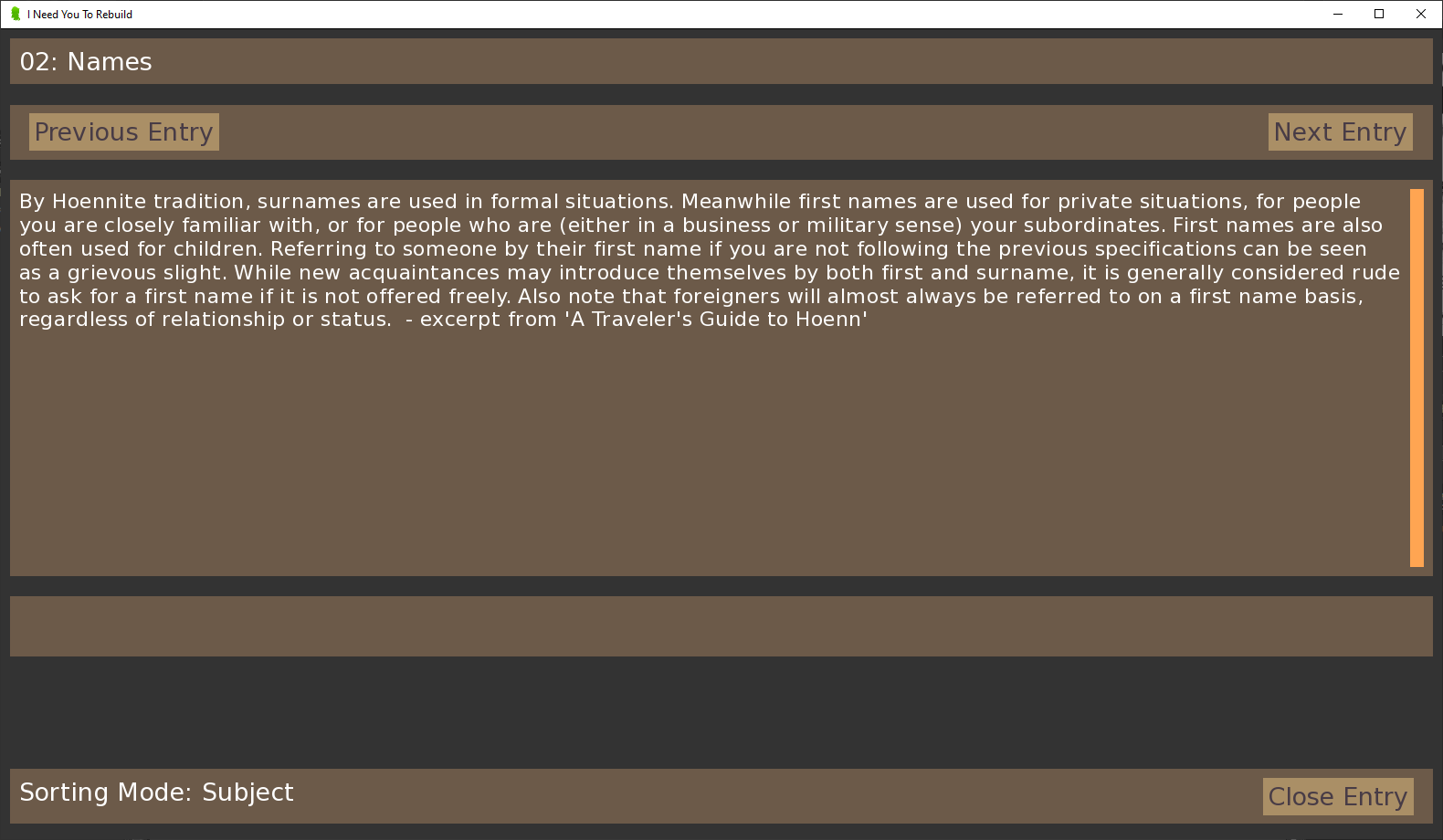 Oct 8: I've had way too many scratch graphics missing, and today was the time to fix that. I went into sketchup and made all the scenes I had been missing so far. Here's a few of the new scenes: 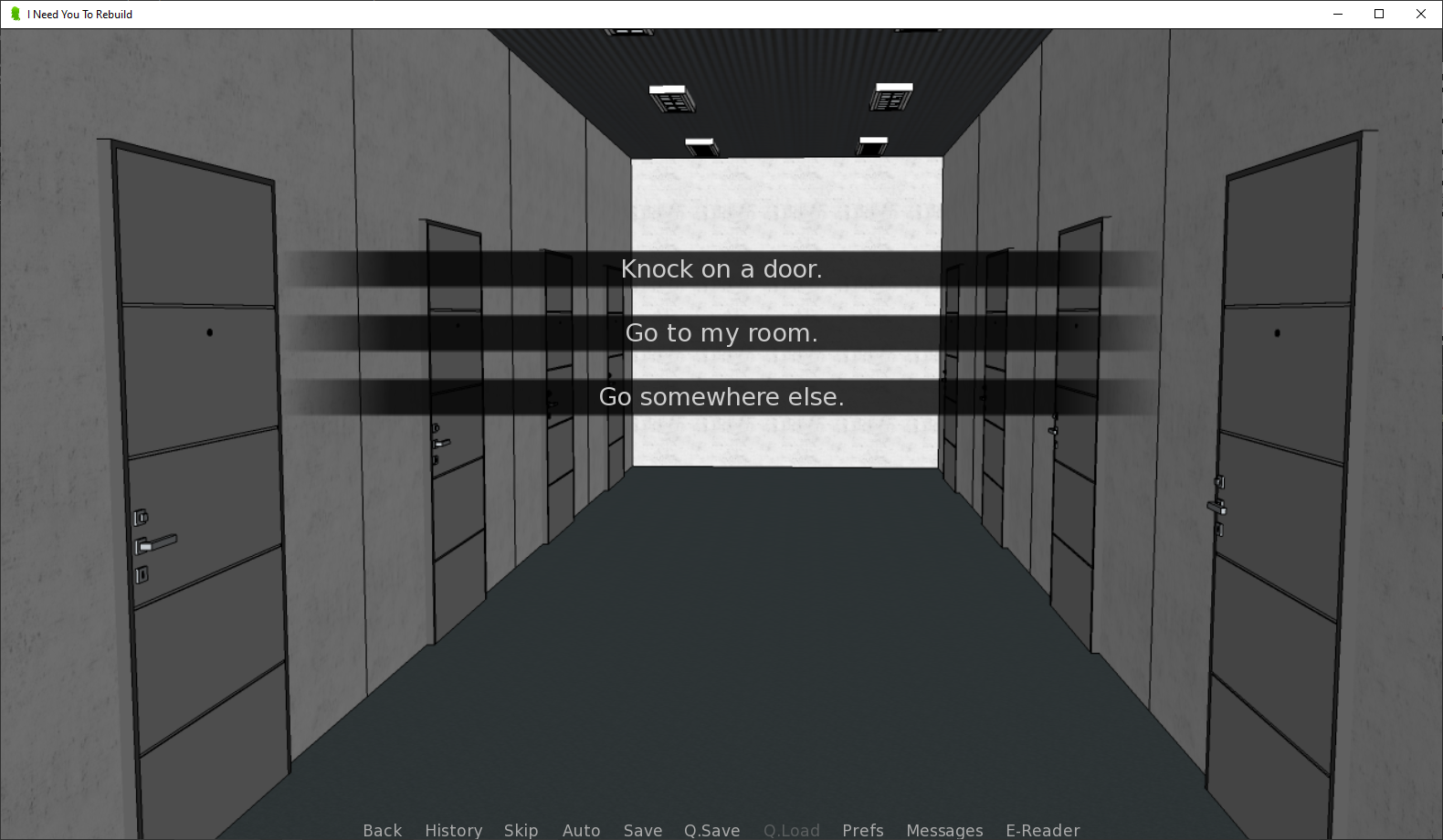 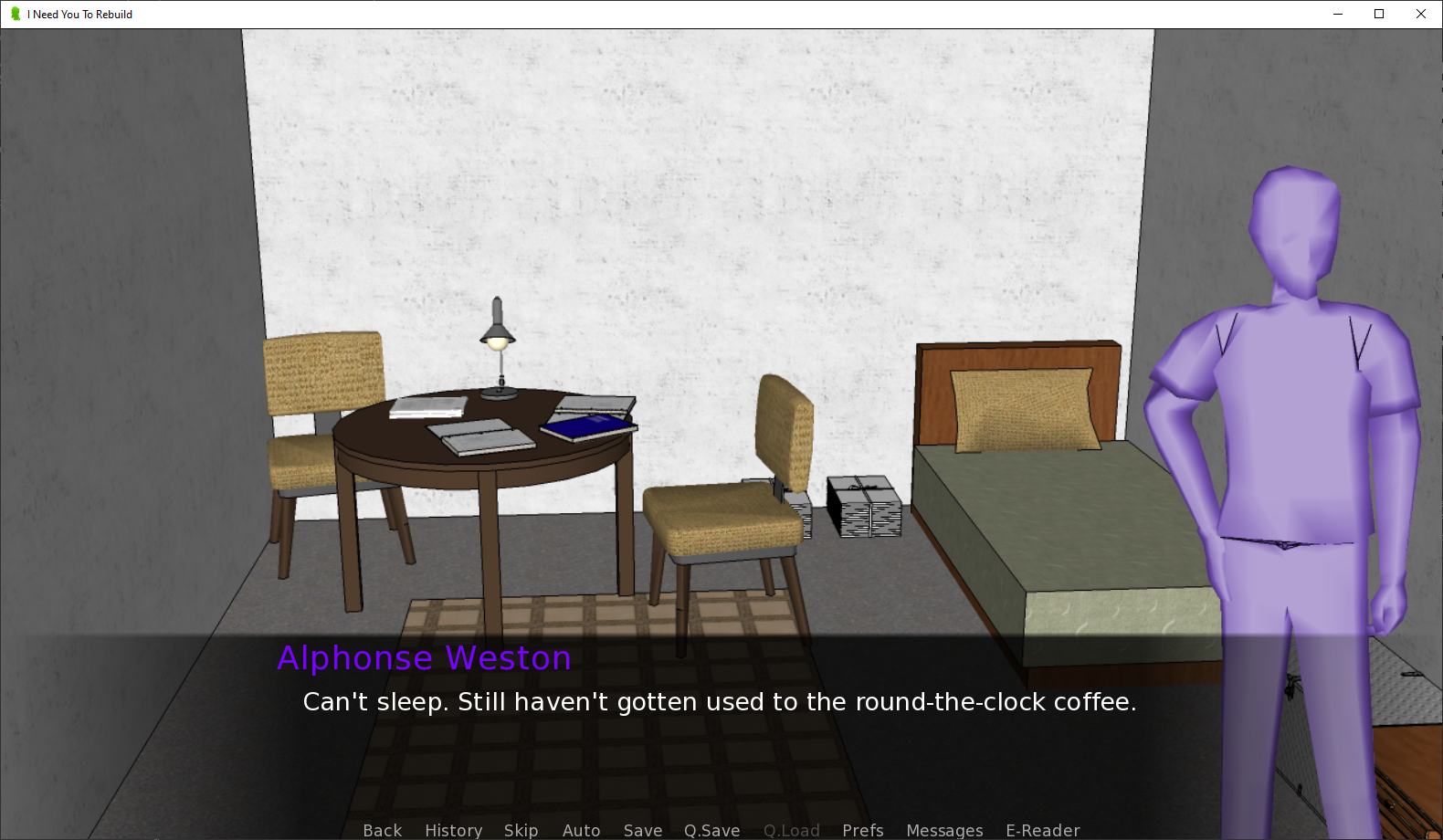 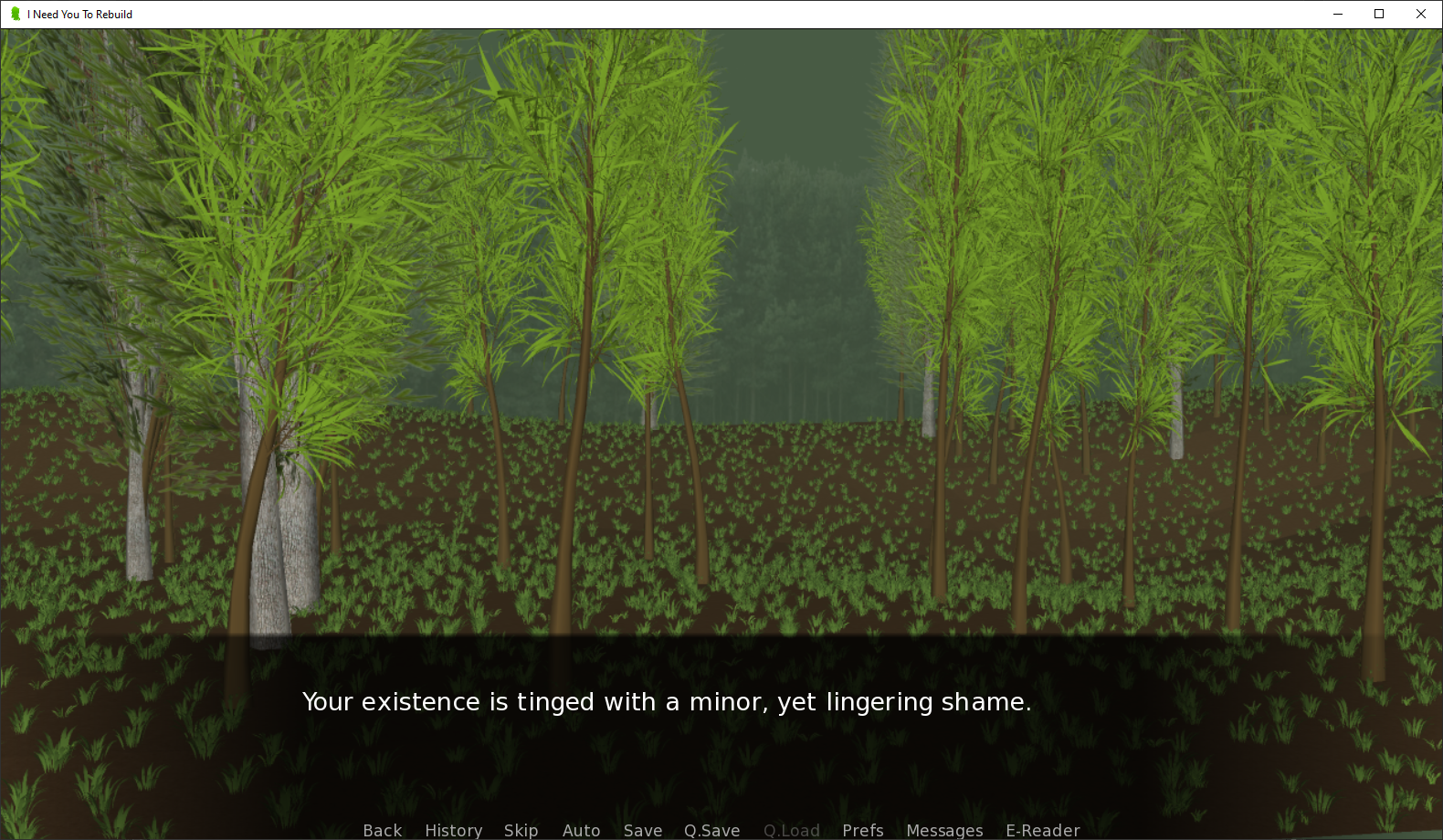 That last one took FOREVER for my PC to render. I'm sure there are more effective and efficient ways to do these sorts of things, but I'm not an artist. I'm just happy to not have black screens for these scenes anymore.

Sounds great! I'd love to have other folks play mine, once I get the current chapters done. In the meantime, what's your youtube channel? I'd love to see what you post from other devs in the meantime!

Oct 7: You know, I'm pretty proud of the work I've done this week. Doing a devlog every day has been a great yardstick to measure productivity against. Let's me know I'm not just spinning my wheels here.

Today was mostly re-writes and "fleshing out" of existing scenes, but for the most part I want to focus on creating new stuff rather than editing old stuff. Editing should come later. This should be the draft. So I'm aiming to not do any more script rewrites for the rest of the month. (This doesn't include editing of code, which will be necessary every day).