it may be the 28th here already but i will persevere >:3c

Anyone else getting an error message in June's route? I haven't played the others, but right after the line, "June attempts a smile, the effort lost beneath the wave of misery that washes over him" I'm getting the screen that says, "an exception has occured" as if something was coded wrong maybe? I added an image of what pops up if that helps in anyway. 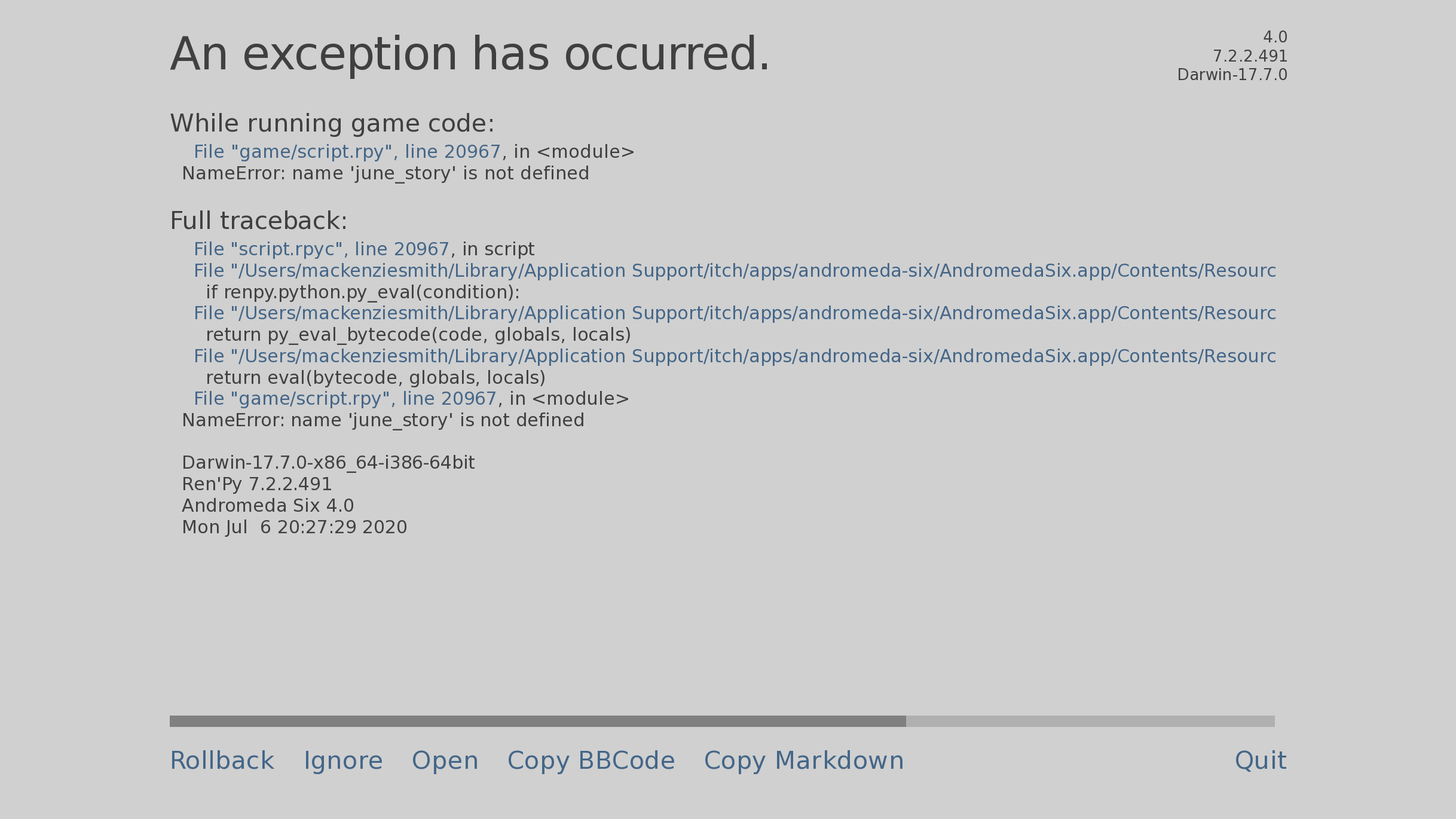 party in the comment's section

and suddenly 2354321 friendships were made

It really is! I mean it is so early in development but so many people have flocked to this game already (and it's understandable why, it's good)

thank you for the message you're a blessing omg

I can't decide if that would be depressing or hilarious LMAO

Long story short, I love this game. I've been following it since the release of Chapter Two (pretty sure I happened to find it the day of or within days of it being released), and have spent hours playing it. I'm embarrassed to say how many hours I've racked up. Nights I should have been asleep before midnight? Playing WTNC. Eating dinner in my room and doing what? Playing WTNC. Feeling incredibly lonely? Playing WTNC to cheer myself up. Visual novels are very close to my heart, since I've been playing them since I was a young teenager. When I was too scared to actually talk to people, I played visual novels. It's a little sad, but now that I'm older, going to college, and making new friendships, I appreciate the games I had for sticking with me when I was lonely. That's why I love these types of games so much. I still go back to them today when life decides to be an asshole, and they make me so happy, especially when I find new ones like this. WTNC is so well done, and definitely on my list of top visual novels. I wanted to give this a well-thought out review, so if you'd like to read my literal essay I have a link attached. It's long, so each section has a header for the topic of that section. This took far too long for me to post, but I wanted to make sure I included everything I could (concussions also hinder this, you can't play video games and it's very depressing). Since it's a google doc I'll go back and add stuff if I remember anything lmao. Thank you so much, Lunaris Games, for the wonderful experience you've given me. (:

To read the not-so-short version of this: https://docs.google.com/document/d/1r634KZwJJ437qAU_rBsRF1UgyaiqXEyR7U3L2qcguAk/...

I was NOT prepared to cry at midnight over this game I'M SO AHHHHHHHHH???????

I played Magical Otoge Ciel years ago and chanced upon this, and like did playing this make me an emotional wreck? Of course. But did I love ever second of it? OF COURSE!

Okay I gotta be honest, I really liked this game at first, but I quickly had a change of heart.

This is going to contain spoilers, so be wary of that.

Throughout the Prologue I really enjoyed it! Of course, it is very cliche, but that is what I was looking for. Meeting all of the characters, I couldn't wait to play all of them. Though, then the Post-Prologue came. It is very interesting and a nice twist, but personally I did not like it. It was the opposite of what I was looking for when I downloaded the game.

When the Post-Prologue started, I didn't have much of a problem (though, the change to Pierre was really confusing for a bit). I actually liked that the idea of all of the characters being actors. It was really interesting and I've never seen an idea like this before. Though, I never enjoyed playing as Pierre. I found myself constantly waiting for "Lily" to show up so I could play her. I thought that maybe it would turn out that she was real and could have an actual relationship with one of the characters. I was thinking that maybe Pierre's part was just to give an explanation for what was happening.

By the time I was at the rehearsal point near the end, I didn't even like the characters anymore. It had nothing to do with their personalities, it was just that everything seemed pointless. Their lives seemed bland, and it was obvious that "I" would not be in the game anymore. I didn't want to play through any of their routes, because I knew it would just lead to this again. I couldn't even stand the rehearsal "Lily's" lines, it all had completely lost my interest.

I ended up with the Liam Romance Ending, which was cute and all, but I would have appreciated it more if it had been what I was looking for. I do like that the game isn't what it seems, but this was so far off I just could not enjoy it. It went from being a cute dating game, to just bland aspects of Pierre's life.

I feel like some games can do the whole "not everything is as it seems" style twist very well, like Doki Doki Literature Club, but I personally did not think they did well with this. The original character didn't even come back into play, and their original love interest and ending didn't even seem to matter. The entire premise of the game flipped around and became something entirely different.

This was a good game, I just feel like it was not for me. The Post-Prologue became bland as I played it while I just skipped through everything in order to reach the end. If you like playing through characters lives, then you will enjoy this. If you want to play this to get the romantic, fluffy otome like experience, then I doubt you will like this.

A very nice game, just not for everyone.

best game I have ever played