I'm looking for voice actors for the pilot episode of a Baldi's Basics animation series I'm thinking about making called Baldi's Basics The Show. If you are interested, you can sign up for a potential role here: https://forms.gle/NjQrUNzAM9R8YQjcA.

To summarize this post (https://mastodon.gamedev.place/@johnsterspacegames/109412931020992640): Added an option in settings for subtitles, and also added some more subtitles.

Are you planning at all on adding the portal poster item? Because if you are, I recently made a tutorial showing how to add the item.

To summarize this post (https://mastodon.gamedev.place/@johnsterspacegames/109396524210923177): WD-NoSquee can now be used on swinging doors, and the grappling hook item has been added.

Starting on November 23rd, I'm going to try and challenge myself to work on Baldi's Fun New School Plus Ultimate Edition at least 1 hour every day, excluding days when I'm not able to. By doing this, I'm hoping it will help me get work done on the project sooner than later. Also, on each of those days, I'll try to publish a post with a summary of what development work I got accomplished during the day. These posts will be published on my Mastodon account, so follow me there if you haven't already and want to stay up to date with the development of Ultimate Edition! 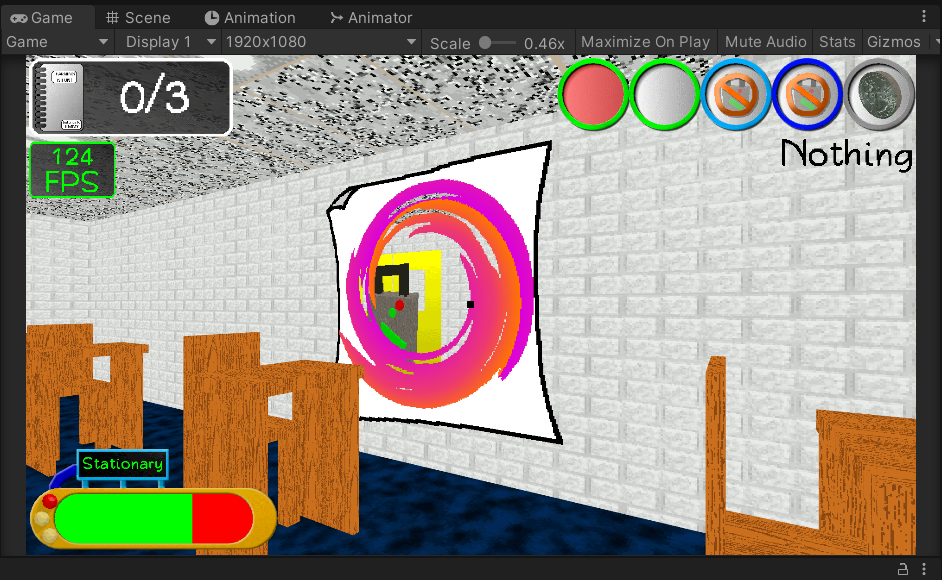 Hello! I looked at some of your tutorials on Gamebanana (like the Mrs. Pomp one) and was wondering if you could make one on how to add the grappling hook item to a mod. Out of all of the items that I've added in my mods and projects, it's one of the items that seems to be harder for me to implement in a fully working non-buggy condition.

V1.0 of Baldi's Image Based Level Generator has been released! It's also available for download from GameJolt (https://gamejolt.com/games/baldis-image-based-level-generator/764576) and Gamebanana (https://gamebanana.com/tools/11237)!

Why would you say that? Do you have any ideas for how I could make it better?

I've also figured out (with the help of some unity tutorials) how to implement a system that generates the layout for a level from an image, using colors to represent different kind of tiles in a level. After the level has been generated I add the textures, decorations, and everything else to finish it. 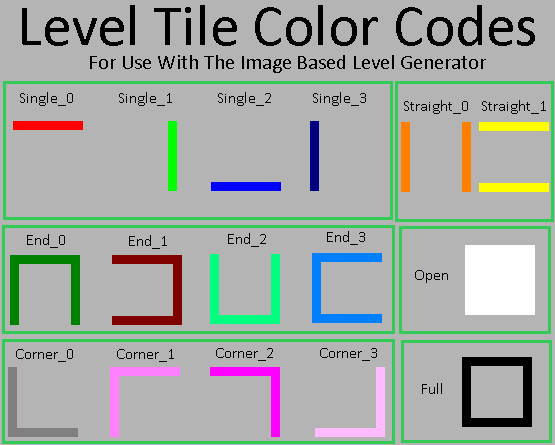 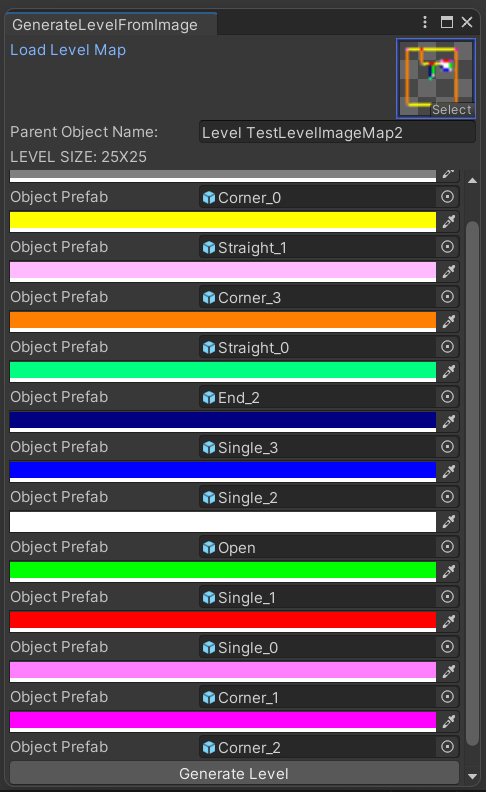 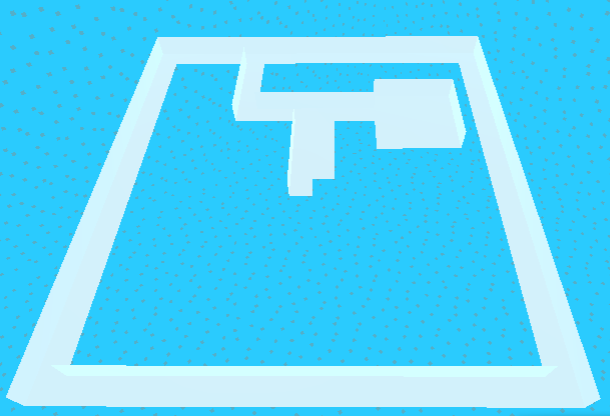 Some things that I've made progress on over the last few days have been the implementation of subtitles as well as mazes which have different layouts every time that you play them (also, the white squares are placeholders). And BFNS Remastered recently reached a total of over 100k downloads and browser plays combined on itch io! So to celebrate, I'll create a video showing the version history of the mod and maybe also do a livestream where I'll play older versions starting at 1.0 and going up to 1.4.5.1. 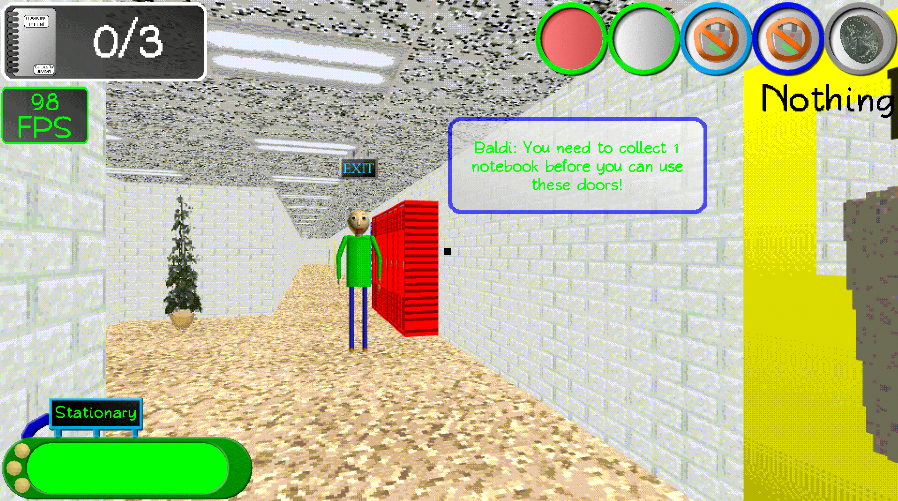 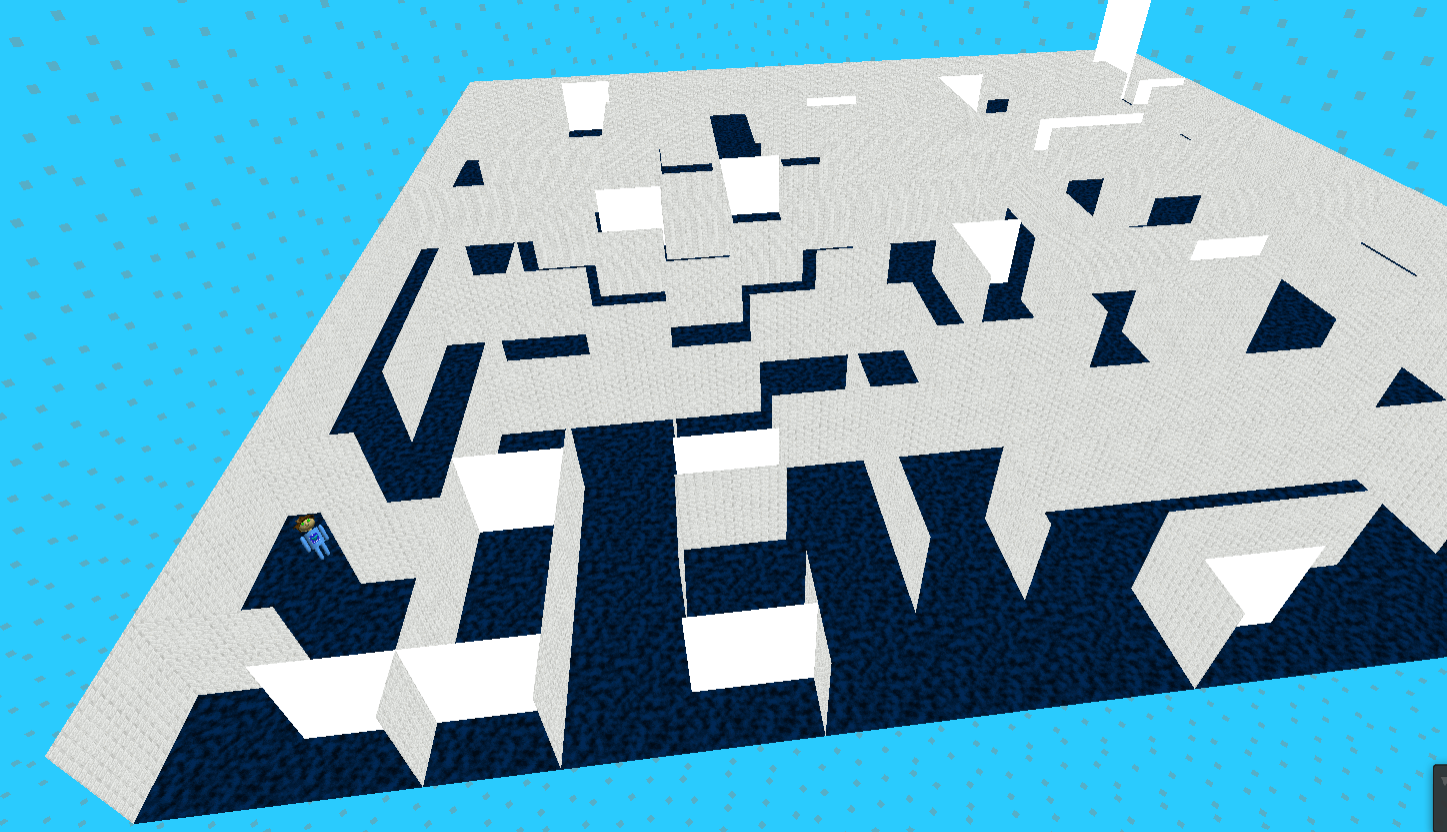 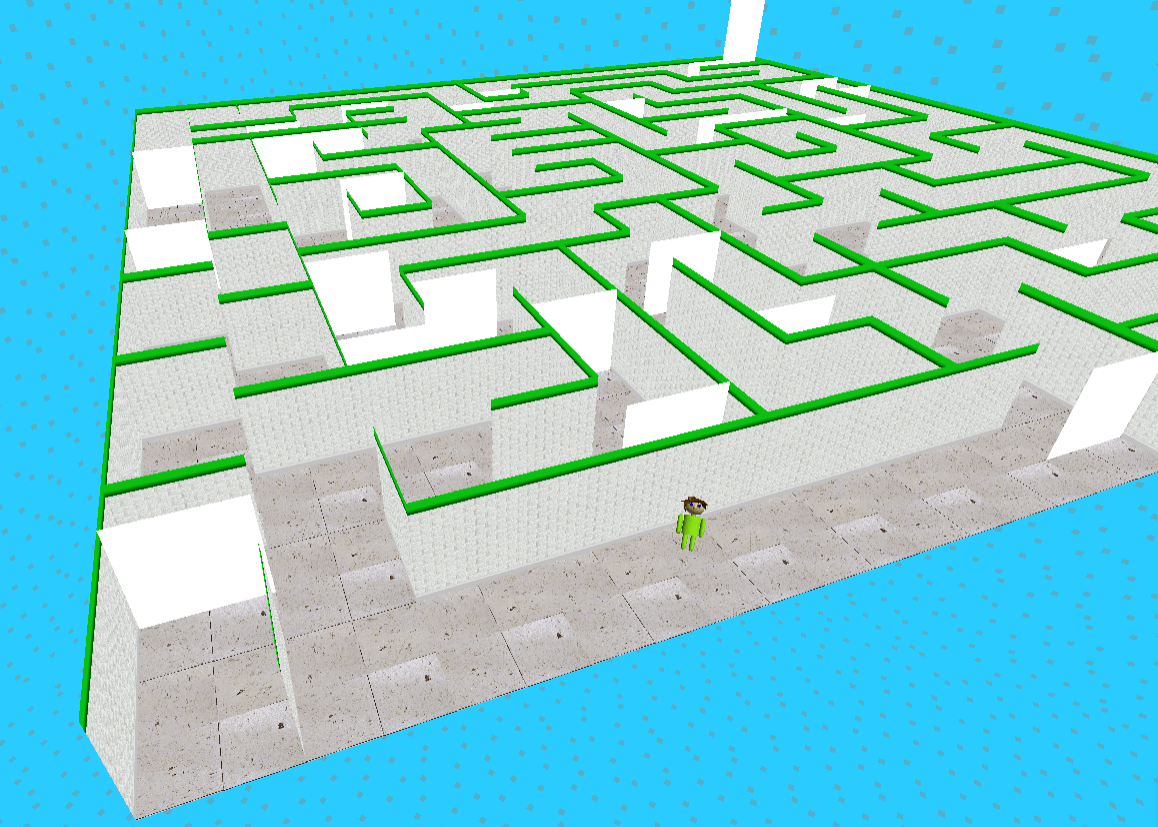 Alright, I'll make a video on it when I have time. Also, I think I might be able to create a mobile port of the open source version as well as versions for MacOS and Linux, if you are fine with me trying to do that.

Here's one of my achievement suggestions.

Description: Use a total of 3 alarm clocks, 2 bsodas, and 1 swinging door lock during a single game!

Hello everyone. I've made this post to ask if anyone still has the 1.3 version of Baldi's Fun New School Remastered saved on their computer or mobile device. The reason why I am asking this is because I no longer have that version and would like to add it for download to the BFNS Remastered Legacy Versions page. If you still have it, please provide me with a download link if possible so I can make sure it's the right version. ---JohnsterSpaceGames

I suggestion I have is that you should add hidden areas which would contain secrets that you can noclip into behind walls in the schoolhouse like the ones in Baldi's Basics Classic Remastered. Including one that has an entrance which takes you to a secret level when you enter it.

I need some more time to finish the update, so it will now be releasing on October 31st instead of October 29th.

I will definitely check this mod out, it sounds like fun!

I think I found a bug where if you run while Mrs. Pomp has you stopped and is telling you to go to her class, the stamina meter still goes down even though you aren't moving. Also, the description for dark mode still mentions a flashlight in it even though you don't have one when you play the mode.

Another change V1.4.6 will include is some updated posters so that the designs match the ones from BFNS Plus Ultimate Edition.

Plus, not Minus. Here is my custom chalkboard submission. 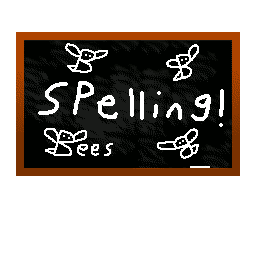 Have a question about Baldi's Fun New School Plus Ultimate Edition? Well, if you do, I would like to hear it! Sometime in November 2022, I'm planning on doing a Q&A livestream where I'll be answering your questions about the project/game. If you want your question to have a chance to be answered during that stream, please submit it via the form attached below.

In this announcement, I have some information regarding V1.4.6, which is the next update planned to be released. This will be a "Halloween Update" and the main feature of it will be a new option in settings called Spooky Mode. When enabled, it will change things in levels to Halloween themed things, like notebooks to jack-o-lanterns. When playing the update for the first time, Spooky Mode will be enabled by default and can easily be turned off in settings at any time. The update will be releasing on Halloween, October 31st. With that said, I hope you are looking forward to the update, and like always, a changelog will be posted once it has been released.

This is just a reminder to everyone participating in the game jam that it will be starting on October 14, 2022, which is only a few days from now. So if you are not ready yet for the game jam, you should start getting ready if you still want to participate in it. 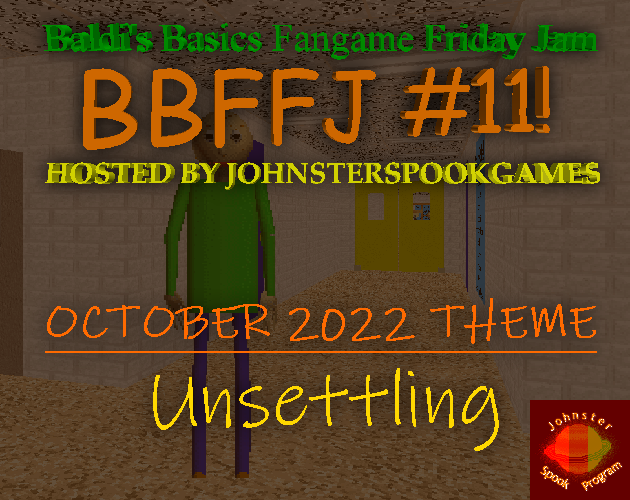 I've been spending some time over the last few days working on the settings screen. In some ways, it's now more like the settings screen in BFNS Plus Classic Edition, which also had settings for screen resolution and post processing (called the Quality setting as seen here). 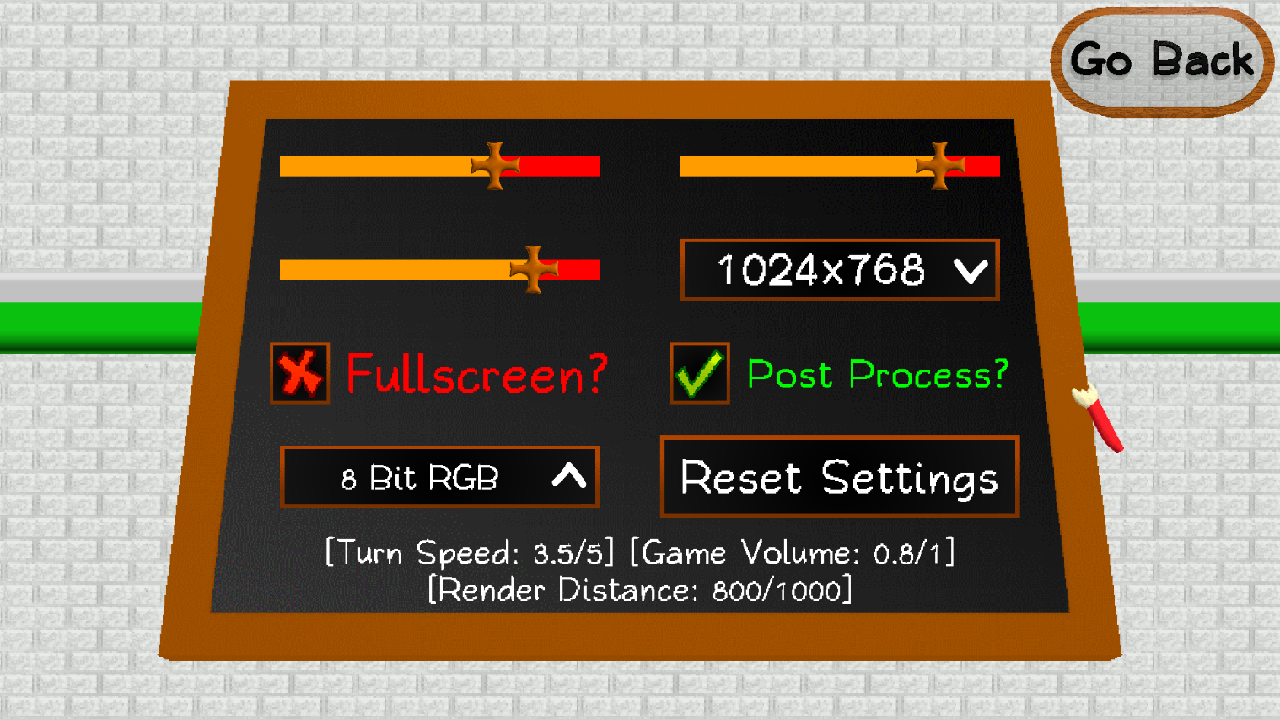 Here's some ideas I've had for BFNS Plus Ultimate Edition. These may or may not end up getting added, or these ideas might change into something else.

1. A score indicator when you click on certain levels to play them. It would show your current score out of the highest score you can get on that level. For example, 10000/30000. To get the highest score, you would have to complete all objectives in a level.

And 3. A tutorial level for Story Mode. It would be optional, and teach players the controls and how to play the game. It would also contain the intro to Story Mode, and show how your friend, Jimmy, lost all of his notebooks.

Well, those are some of my ideas. Also, stay tuned for future development videos, which will be released on the BFNS Plus Official youtube channel!

Ok, thanks for telling me. I've actually used a super mario bros level editor before called super mario bros game and builder which I used to make a fangame called Mario's Quest. Here's a video of it.

It's October, so you know what that means...It's JohnsterSpookProgram time! For those who are new, essentially what I do is every October for the rest of the month, I change JohnsterSpaceProgram to JohnsterSpookProgram. And since I'm also back from my modding break, it means that work on future BFNS Remastered updates, a possible Zolt spinoff mod, and BFNS Plus Ultimate Edition will continue! Happy October 2022! Also, I'm going to start adding levels that have been submitted to the level submission form. You can find them here when they become available for download. 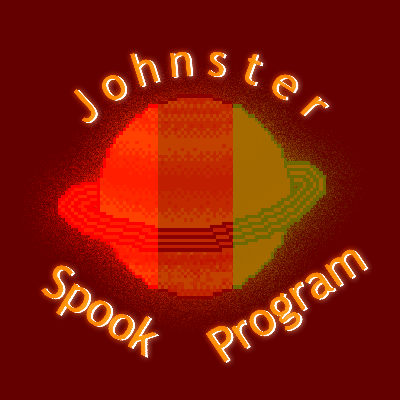 From August 27th to September 11th, I will be unavailable since I will be taking a needed break from working on mods and other projects. In the meantime, I hope you'll enjoy trying out a demo version of the level editor which I just released a few minutes ago. When I do come back, I'll make a post on this page saying that I'm back. Please understand, and in the meantime some new videos will be premiering on my YouTube channel! -JohnsterSpaceGames

Yes, there will be a browser/webgl version released when the demo comes out.

No, but you have a 24 by 24 tile area to work with, so you can decide how much of it you want to build your level from. For most players creating levels, that should be large enough.

If you are talking about Ultimate Edition being ready, well no, I am still working on it. But I will be releasing a demo of this level editor soon with some of the planned features.

Well, I'm not really sure how to implement some of those things, but I have made it so when you click on an object, you can select objects to place on it from a menu, like notebooks for example.

It will be releasing either August 26 or 27th.

That will not be necessary, because I'm planning on releasing a demo of this soon.

Because of how quickly I have been making progress on the level editor, I might end up releasing a demo of it before Alpha 6 of Ultimate Edition is released. It would include some of the planned features, like being able to change the level's brightness as well as the ability to save and load a level you've created in the editor. 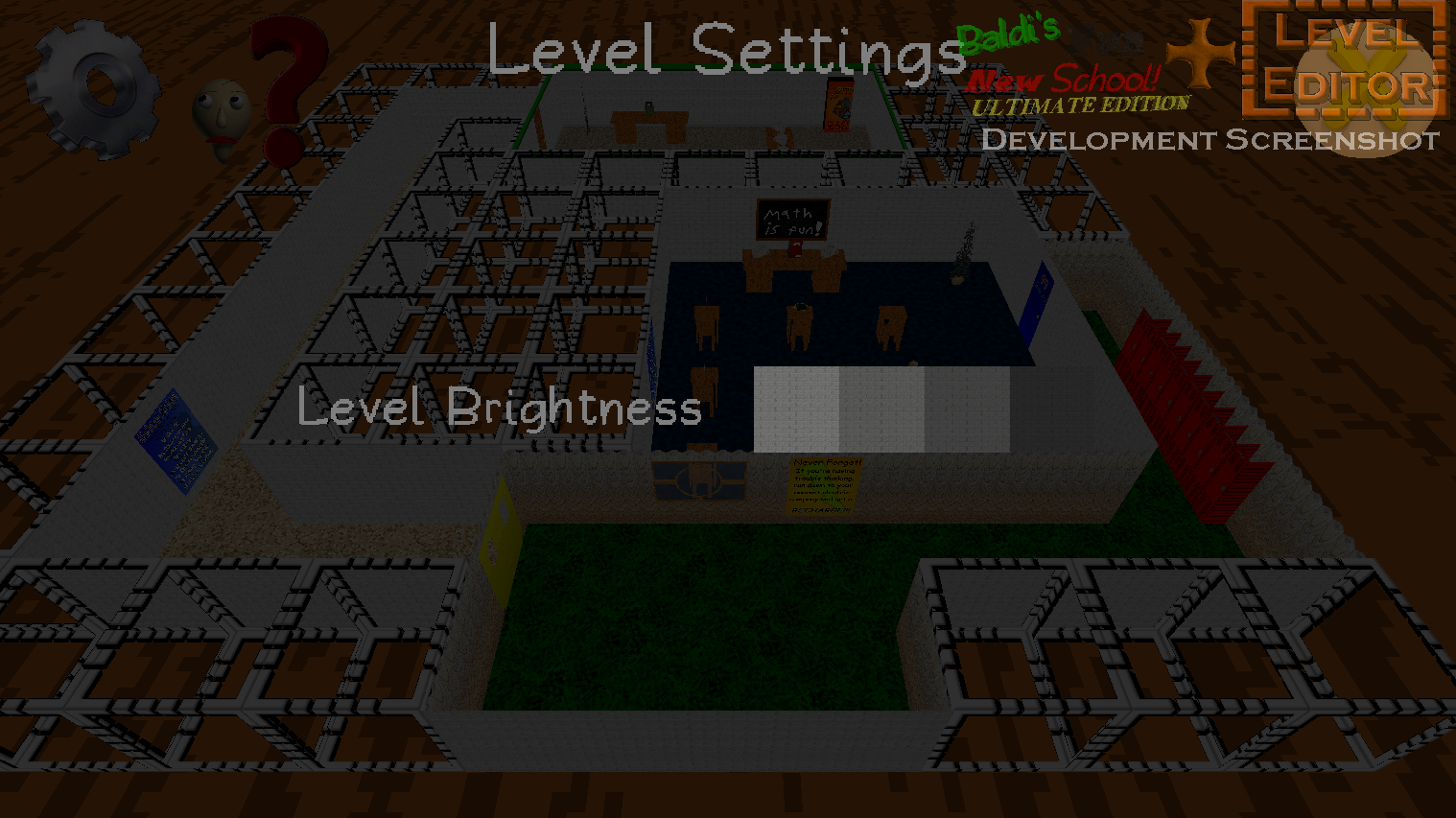