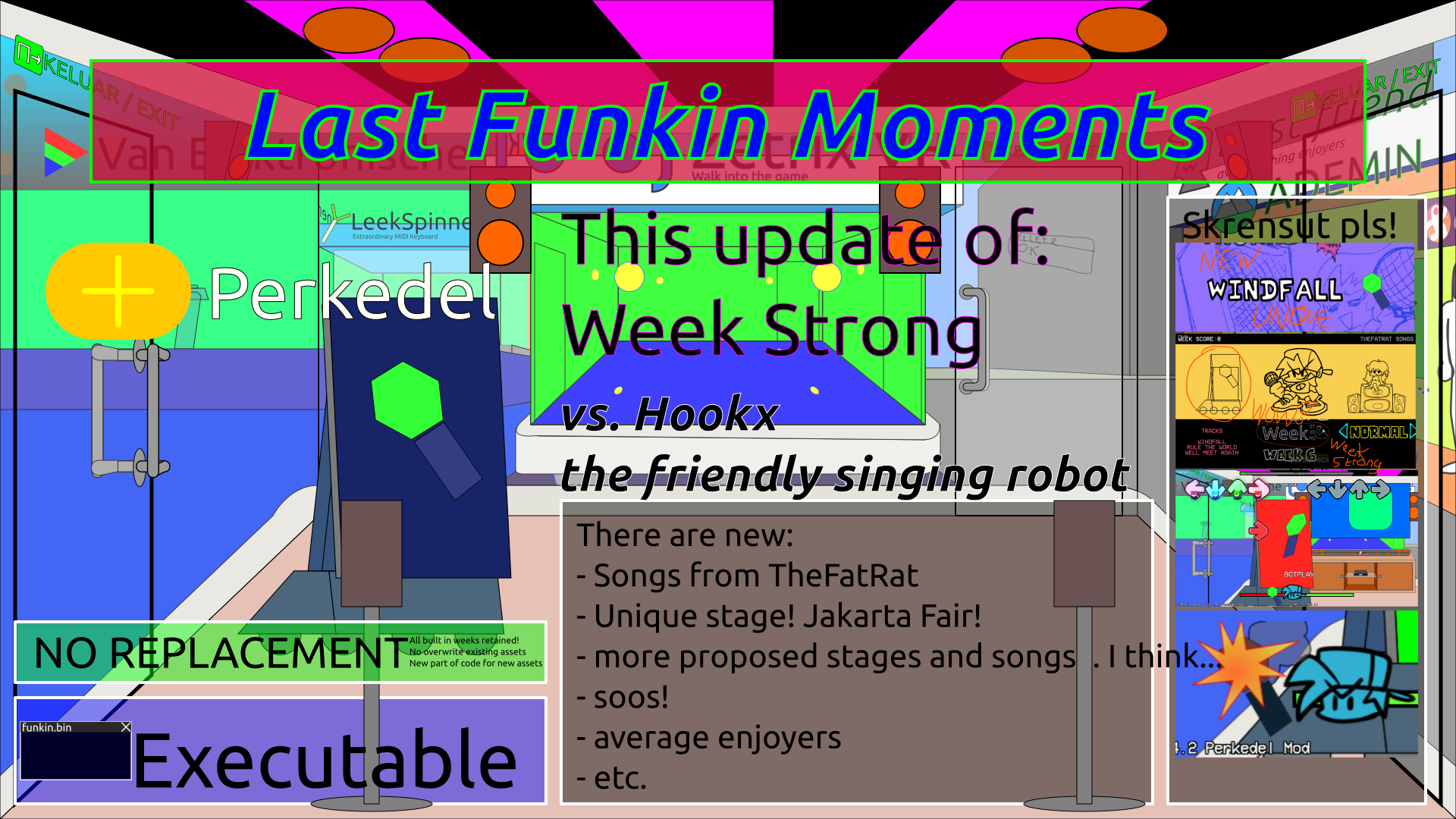 Last Funkin Moments. Collection of FNF mods from Perkedel. Everything weeks & stuff yeah. Enjoy, the last drop of funkin, before everything went.

stay tuned on that download link above for the next update yay.

Despite being vaccinated, always. Stay Safe.

So yep, we are also giving awareness. hopefully works and reduce that particular karenification in regards.

he already has. Yeah. Where did you find he hasn't yet? A typo?

Yeah sometimes you don't even need post injection patch these days. Because so thin the syringe, and so skillful these doctors are you won't feel anything than just an ant bite.

Reply
FNF Modding Plus community · Replied to BulbyVR in Hey can I uh...
Perkedel Technologies353 days ago (1 edit)

Your name will be in the credit. and I also make sure it's open source yay!

to my own mod thingy pls? I mean, copy that part of the hscript modchart from PlayState.hx, to my mods. like uh.. this Last Funkin Moments.

damn. This is embarrassing. But Just in case.

Stuffs reviewed in order to commence the yoink at least safely

Verdicts from what review above

I can basically yoink codings that are licensed MPL-2.0 without permission as stated from wikipedia here quote "Many of the most common free-software licenses, especially the permissive licenses, such as the original MIT/X license, BSD licenses (in the three-clause and two-clause forms, though not the original four-clause form), MPL 2.0, and LGPL, are GPL-compatible" yay. Oh don't worry. We'll make sure your name and links related are there in the credit file yeah.

I might wanna other stuff too as well. may I?

hi welcome. thancc for your attention.

Hmmm, perhaps you misunderstood the concept.

If Linux happened to be the same, then it would be vulnerable then.

So why Linux is Open Source? Yeah, because everyone must be able to see, learn, and mod it. If who knows security experts found vulnerability, any person with great moral standard would do the opposite of what you said (vulnerable to hackers) which is

bring the patch. is that simple. And there it is. Linux is once again secured from evil hackers, thanks to this good hackers. And oh, that's called Security Update.

Same goes for all project. no need to be Linux specifically, or even security at all. Good person especially bug hunters, hunts the bug, bring the bug to the project master and report it to the project master. It then be fixed and everything will be fine once again. Happily ever after.

Of course, I understand that we are not always lucky. Exploits we have no idea yet, got into their hand of evil hackers, like what you said. BUT, again, this should be rare usually. Most cases, ends good, despite existed bad endings. and as always, in that bad ending, the other who is hero will save the day. WannaCry, lose.

Did I mentioned that ransomware pandemic of the bad old days? yeah. Microsoft and anyone, let me tell you. You can't do this alone. Someone out there would like to volunteer. and most of these volunteers are good hackers. they'll hunt the bug for you, so together we can make project secure. yeah!

buddy, today your image link is now invalid. It was "I don't care" one, lol

and it's going to close in hours!!!

Well people, look's like you're going to be full ass busy right now!

never seen a kickstarter often as successful to this.

we almost reach bonus goal, but hey. we got them!

Can you please add mouse & touch support? Because not all devices had navigation key.

Tablets, Smartphone, embedded devices (both touchscreen and keyboardless but trackball), you name it.

hmmm idk, but it has to be seamless, like, scroll wheel or swipe moves the selection, tap or click selects, etc.

Wow, this plugin is great! everything is seamless!

you should try to compile Aseprite yourself!

hello, please read reply from comment ZebulonPi said. Come back to this project page and scroll down to our reply to ZebulonPi. we are apologize for what Joel had said previous year

Hi ZebulonPi, thank you for your response.

We understand that the developer can be a job, and indeed everyone has their favorite way they like to monetize and gain revenue from their job and products which comes in many different forms like donation, paywall, etc.

Well, as you can see, the context regarding the disagreement of paywall our founder, JOELwindows7 had said only points to Software, as he should've implied further if haven't. Obviously, it is make sense to pay to obtain Hardware and shoplifting physical items means thief, which of course we do not encourage doing at any moment at any time. Also, we already know, pirating software is bad idea. Therefore we usually purchase software in legit ways. Although being a good person, we are only excited to purchase video games at the moment. For tools like Aseprite, Adobe, etc. we prefer to avoid such, and rather use any alternative $0 software tools as all as possible, due to our company policy.

As a matter of the fact, we are deeply disappointed regarding the decision Aseprite has made in terms of license, where formerly was a free culture compliant, GNU GPL v2, now went into a proprietary licensed according to their GitHub page. with this change, Aseprite is allowed to restrict redistribution which before, the GNU GPL v2 license requires the product to be redistributable. Beside of their default license, there is a special license for education which can be requested by education institutions.

Fun fact, yesterday we have researched the project Aseprite and found out that you can compile one yourself, absolutely free. unfortunately though, we have not yet compiled the source code ourselves, so we have no idea what outcome will be whether it is the full version or trial version.

We also have to mention regarding the GNU licenses which couple days ago our founder had criticized for reasons like Price. according to his thought, GNU licenses do not explicitly mention the requirement for price of the product, although in any case the source code shall remain visible publicly. in fact, GNU itself had clarified about selling product, and as it says, that GNU allows you to sell the software (in our thought, that is the binary), while still requiring you to share the complete source code available to the public. Restricting selling would otherwise become irony to the freedom philosophy. one of the example project that are licensed GNU based but paywalled binaries are Ardour, and this Aseprite (formerly GNU GPL v2, now proprietary or education). by this matter of fact, our founder then thought to make his own license that are like GNU but disallow paywalling both binaries and source code, however the idea is on hold due to complexity in execution, planning, and embargo.

you can read the article our founder had written here

As the we have went by time, we are going to tell you that we are changing our Reaction Policy, especially regarding paywalled soft copies. as a matter of the fact, our founder had ever started to subscribe a Patreon artist for the purpose of the apology as well as further expanding his collector passion forward. As of right now, we have added some things that we are looking forward to purchase beside video games, however tool isn't the option yet. Apology to Aseprite and other project directors alike. Perhaps next time.

EDIT: Here is Livestreaming replay of me playing Toree 3D from start to finish (except time rank)

pardon for terrible framerate because my laptop spec is not maximum. but imagine it as back then like YouTube 2007 thingy idk, you found an abandoned video game from your favourite game store and you're excited about it. wanted to share your recording to your close friend..

This, is a real Platformer, and that's one of the example how to properly platformer genre.

Useless costume? No! Why is that? in here, collect star and speedrun is enough!

Boss Battle? why has to be staying like that in place avoiding projectiles and then hit boss at right time? that's too mainstream! why not try the same regular platforming only harder? that's creative! and this is what you do here on final level! I know it's seems yeah you know. but atleast it's there rather than other games that had mediocre idk..

Bonus? Oh wow, we got bats! we can see everything. Argh! No time rank with bat? how did you know if we would do that cheat? 🤣

Price? no contest. you must buy it. this is relic! don't waste on that platformer that contains redundant costumes and other torments, buy this instead! You'll never regret this, I guarantee!

and hey, it does run on Nintendo Switch!

hmm what else? oh yeah, sorry, SE if you felt offended with this. idk, but we just..

Here the wiki! https://sindenlightgun.miraheze.org/wiki/Parlor wow!!! we are famous!!! yeah!!

Ikr. I didn't know playing this in 16:9 went crooked, unlike in 18:9 on long screen phones. I think I've settinged wrong here. I'll fix that later.

I bought the game and recorded the gameplay. If you found something wrong, I apologize. I am human and could make mistake

I bought the game and recorded the gameplay. If you found something wrong, I apologize. I am human and could make mistake

I'm sorry. I went too karen. Pls forgive me. I now have bought this game for $3 + extra $5. I have recorded the gameplay.

I bought the game & I making video for it

pls wait, I have bought for extra and made video

I am editing it

Removed 2 free game from request. I saw that "1 game only if free".

I hope you see this. If so, then felt you changed your mind, feel free to reply again so I readd from request

Hello. I have 3 games, and would like to submit these. Thank you.

edit: Removed 2 free games from request as it says "1 game only if it is free game"