Ha! I changed the spelling to the Greek variant because of the actual Project Icarus, but it still kept reminding me of Dirk Gently. I figured, "Oh, they're different enough that it won't matter," but now that you mention it.... 😅

Whoa, awesome! Thanks for posting this!

I've never used the InDesign template — that was created by James of Unknown Dungeon, or @unknwn_dngn on Twitter, so he might be a better person to ask. I can tell you about specifics I used in Affinity Publisher, though! (But just a heads up: I am keenly, awkwardly aware that the text is pretty small and tight in the originals, so if you have the space to go a little bigger, that might be welcome.)

Reply
24XX Jam community · Posted in Are we supposed to use the "24XX Compatible" logo?
Jason Tocci12 days ago

I believe that this is just what Behance posts things as by default, and in some cases Mike/Beeple never changed it. You can see a conversation expressing concern over this elsewhere in this thread, but the long and the short of it is: I emailed to ask if I could pay licensing fees or if I should switch out some of his images in some games; he hasn't gotten back to me; but he did get back to someone else who emailed him, and said to that person to feel free to use any of his everydays.

Reply
24XX Jam community · Posted in Better to have one Project to collect submissions or one project for each?
Jason Tocci17 days ago

Yeah, I think John's right in that more projects pages = more visibility. 2400's "everything on one page" approach is kind of a weird experiment, and I'm not sure if it's working out exactly, but I appreciate not having to do a new repeating background image for every single game I make for it.  :-)

No response, but someone else has reported receiving blanket permission to use whatever.

Thanks, forgot to upload it! Should be there now.

Absolutely. This makes it more like the Soft Horizon games that inspired 2400 (like The King Machine and Sand Dogs), which often see you rolling a d6 as your highest die, meaning you can't get a full success without any risk realized. 2400 doesn't go quite as far as Soft Horizon, though, as that game actually lowers and eliminates dice for each hindrance you face until you literally can't take certain actions. We had a game once where two of the players were so badly injured they couldn't even attempt a roll to rescue a third character who was being attacked. I left that out of 2400 because I wanted it to be more streamlined, but generally speaking, I think limiting options and roll results can lead to some tense and dramatic situations!

Thanks! I think it actually helped that I failed to run it on Halloween: I realized that I was pressed for time and had to redesign a bit to condense it enough! 😅

His Behance and Instagram profiles have the words "Free Creative Commons visuals," but the place where I specifically saw a CC BY license was at the bottom of individual everydays posts underneath his profile, with an icon that specified the license when you hover over it. (See attached image.)

That said, some of his everydays posts have a copyright icon, not a CC BY icon. I'm not sure if that's an oversight based on how the default setting, or if he sets different rights for different everydays. I'll ask him. 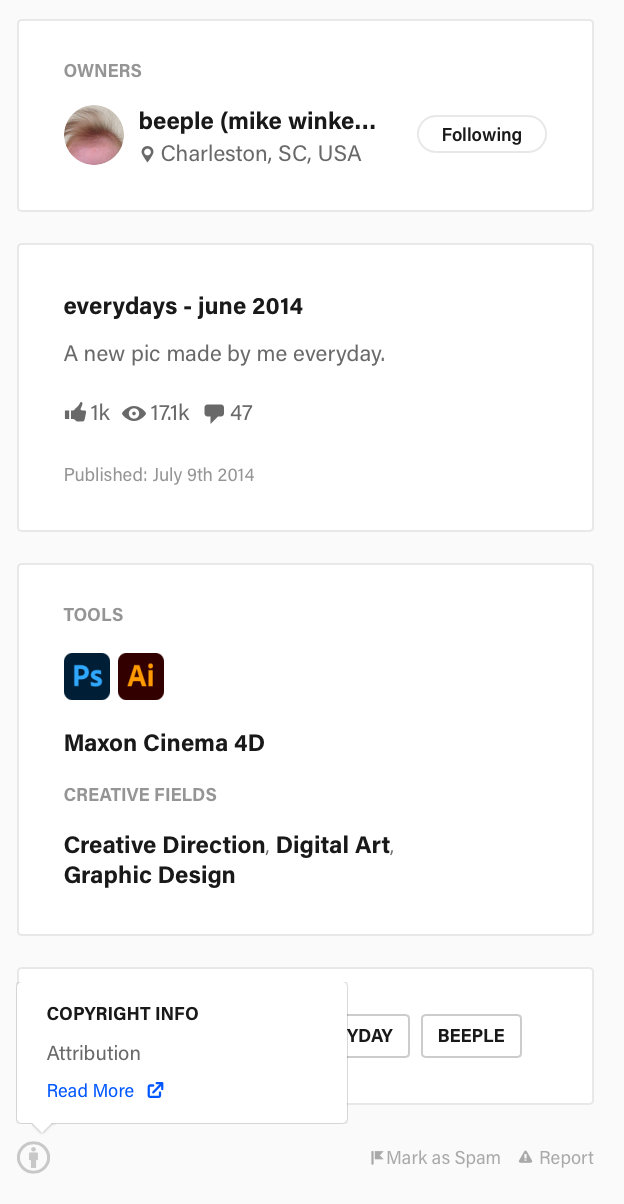 Just a heads up about those starship geomorphs: They’re released under a CC NC license, so if you use any in a game, I think that means you should not charge for it. (But I am not a lawyer!)

That works too! I just use Behance because it has high resolution images. If you describe where you get stuck there, though, I can try to help out.

Yes, apologies for the delayed reply! Email me at jason at pretendo dot games.

I am pretty confident there are typos I missed, but this one was phrased that way on purpose to save space. (It’s hard to fit everything sometimes!) Maybe I should rephrase for clarity, though. 🤔

The latest versions of everything all have the same spreads (1–2 disaster, 3–4 setback, 5+ success), so you may be looking at an older version of Inner System Blues. The original spread was inspired by the luck roll in Electric Bastionland (which doesn't lead to many interesting disasters even when unskilled). I also tested with the Blades in the Dark spread (1–3 disaster, 4–5 setback, 6+ success), which felt like more of a downer than intended. I recorded all the dice results folks rolled and found that if we'd been using the spread I have in there now, it would've been about 70% "I get at least some of what I want," which was around what I was shooting for.

In Invisible Sun (and Amber), you’re told that yours is the real world, and anything resembling our own world is just an illusory “shadow,” or reflection, of that true reality. So, you know, screw those worlds’ people. Use them as servants or soldiers or whatever. Not like they’re real people, those works say.

I have enjoyed reading Invisible Sun and Amber, but their authors don’t seem to realize that this sounds creepily like how slavery and oppression have been justified in real-world history. Illusorati sets up the same dynamic— a city of powerful magicians and world-walkers who think they’re at the center of the universe — but says it’s been over 100 years since it was legal to enslave people from other worlds. That doesn’t mean that inequality and oppression against those people just disappeared, though. The game is more overtly political in its aims and its characters’ pursuits.

Nice, and here's the link!

I use DIN 1451 Std MittelSchrift and EngSchrift in the logo and headers, and URW DIN (Semicondensed) for the body text. You could definitely get away with using URW DIN for everything, but I use 1451 in the log because I like the "2" better.

Working plan is POD in 2021 (on the early side I hope), after I have a chance to make updates from playtests. The good news is that revisions should be way faster than they have been for Agents of the ODD, as I don’t feel the need to “fix” the graphic design on this one. 😅

This is so kind! Thank you!

Reply
2400 community · Replied to tibbiusgames in Anyone interested in playing on Discord or elsewhere?
Jason Tocci40 days ago

It's not even "my" cover art! All the illustrations are Creative Commons licensed by Mike Winkelmann (BEEPLE), so as long as you give him credit, you are welcome to use them. Thanks for checking, though!

There’s a field labeled “Profile” near the top, which is what this game calls backgrounds/classes—but let me know if you mean something else!

Ha! I’ll adjust attention to the SRD and see if we can launch it earlier than expected. 🙂

That could certainly work! The intent, though, is not to track damage or hit points at all, but rather to handle wounds descriptively. When the player is about to do something that could get them hurt or killed, the GM gives a heads up, and calls for a roll if the player proceeds anyway. On a 1-2, the worst happens; in a 3-4, something less terrible happens.

So, let’s say the GM says, “You’re welcome to attack, but that opens you up to their attack, and the weapon they’re holding could probably kill you. You okay with that?” And let’s say the player says okay. If they roll a 1, they’re dead. If they roll a 3, they get hit badly enough to lose a body part, but they’ll live. Let’s say it’s a lost hand—that’ll hinder rolls later.

That sounds pretty unforgiving, but you can actually escape quite a few deadly scenarios by carrying around stuff you can break in defense. In the example above, if that player had armor, they could say that absorbs the blow, and they’re fine. If they had a cybernetic arm, they could say that absorbs the blow—that’ll hinder them later, but better than being dead. And so on.

Hope this helps! I don’t think you’ll break the game if you import HP rules from elsewhere, though. The game’s meant to be hacked, after all!

In case anybody else is paying attention to this thread: heck yeah, stay tuned.

You've gotten me thinking about how I might do this soon. I'm considering starting with a Cosmic Highway crew on a job that takes them to Prospero's Dream from A Pound of Flesh, which introduces cybernetics from Inner System Blues and illegal resleeving, with a tip that they can get resleeved legally in Alpha Centauri via CTRL. And somewhere along the way, I want an excuse to run them through Dead Planet and Gradient Descent. (I love Mothership modules.)

Thanks! I figure the average person is only likely to ever stop by if they think, “Didn’t I see suggested stats for [specific adventure I was already planning to run]?” 🙂

Sure! I definitely know scientists who work in multiple fields of expertise.

Thanks for the kind words and for the question—I had a feeling this might be confusing the way I phrased it, so I'll definitely adjust for the revised version. You're correct that the intended meaning was that every scientist has to specialize in some kind of science; if you get to check two boxes, you shouldn't just take two contacts. It occurs to me now that this restriction might not even be necessary, though. Hey, maybe if you play a scientist and take two contacts, but no specialty, you're a grad student or something, and haven't picked a specialty yet. And maybe you should get to pick from page 16, considering that plenty of scientists and soldiers have had other jobs too.

I guess the short answer is that intended it the latter way you phrased it, but I welcome you to interpret it either way and let me know how it goes. 🙂

I thought about writing it as "+ S" for clarity, but I wanted it to match Knave's notation in case you ditch the rest of the game and just use the spell list for some other OSR game. That might've been misguided!

So far I’m trying to make them plausible to exist in the same universe, but separated enough by space (or time?) that they could potentially have wildly different levels of technology.