GIF
Yomi Hustle (Open Beta)
An online, turn-based fighting game and superpowered fight scene simulator.
ivysly
Strategy
No Reservations
High-octane fast-paced top down shooter plus "dating" "sim". Take your girl out for pizza.
ivysly
Shooter
Defy Godwin
A comedic work of interactive fiction and a realistic forum simulator. Made in 72 hours for Ludum Dare.
ivysly
Super Misfire or: One Gun To Shoot Them All
Every shot is a different bullet. You aren't safe from any of them. Top-down shooter made in 48 hours for Ludum Dare.
ivysly
Shooter
Play in browser
GIF
Rocket Sword (Demo)
You are the projectile. 2D Hack-n'-Slash. Wield the most powerful weapon in the universe.
ivysly
Action
My Awesome Game
My awesome game.
ivysly
Play in browser
GIF
Leg Frogs
A simple volleyball simulator, except you are a frog.
ivysly
Sports
Play in browser
GRiPPY​
A hardcore, subversive platformer about climbing through a mysterious underground complex.
ivysly
Platformer
Play in browser

hover/air stalling needs a nerf but no wizard is not busted at all rn. yomi hustlers just ran a tournament with 128 people and top 8 was 6 cowboys, 1 ninja, and 1 wizard.

quick draw is getting another option that will be more of an interesting mixup.

cool idea, i wanna do something like that anyway.

in the steam release probably

there will be opt-in cosmetic dlc

i'll look into it

servers have been going down the last hour or so while I fixed stuff, it should be up now

there is a match timer setting in multiplayer :)

I'd really like to do something like that, but it's difficult. hopefully I can improve performance soon—I have some ideas how I would

there will be a new character soon

not yet but i'll be working on it

I made it, there's no copyright, don't worry

when the game is out of beta i plan for a small paid "supporter pack" dlc that includes some cosmetic options like a color picker for your character :)

nothing i can do about this - the game only supports GLES3 and up. i may experiment with gles2 versions in the future. i'm sorry :( 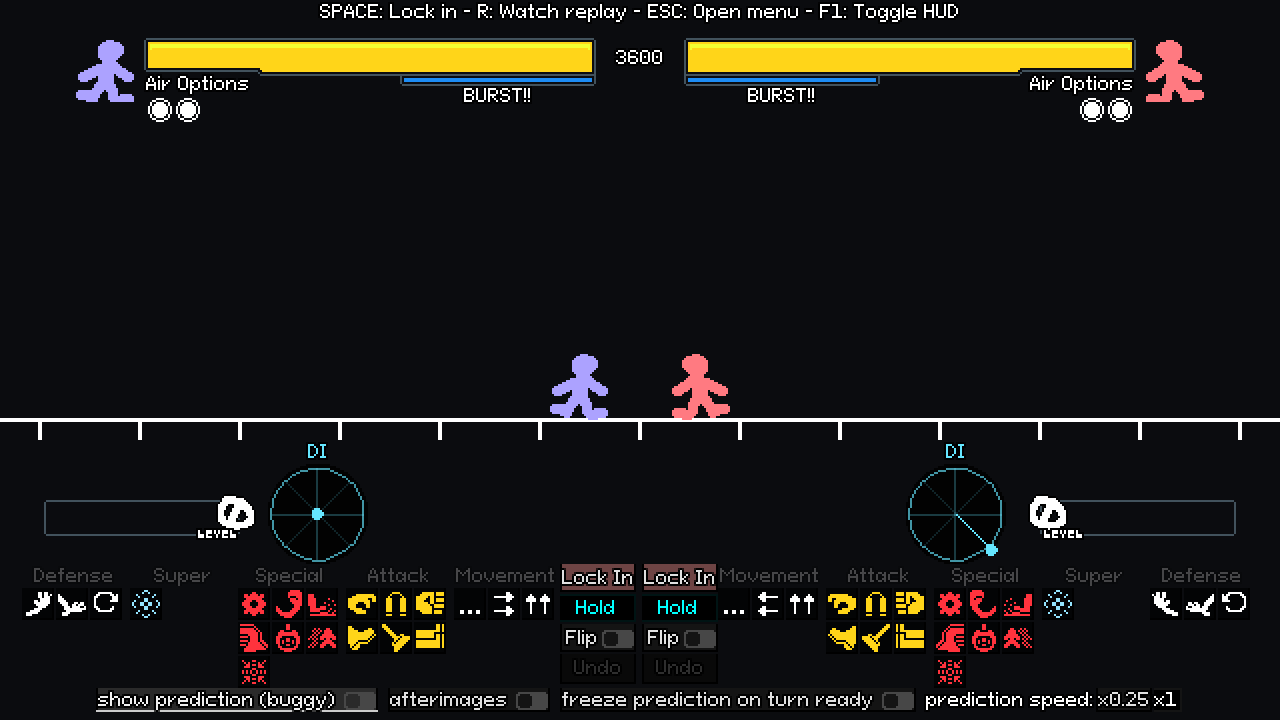 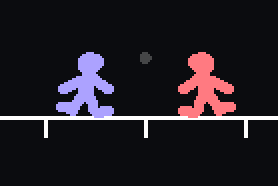 The game starts paused. You control one or both of these stick men, depending on the game mode.

This tutorial uses singleplayer mode to demonstrate, with explanations provided for multiplayer.

Here is a list of your available fighting moves. To perform an action, select the move by clicking its button, then click "Lock In" or press spacebar.

In multiplayer, you will be given a limited amount of time per match to make your decisions.

Some actions have additional parameters you may change before locking in.

You are provided with a prediction ghost that attempts to simulate the outcome of the selected action. This ghost also indicates which fighter will be actionable first.

In multiplayer, you can this to determine the most advantageous move based on you and your opponent's available actions.

Once both players have locked in, the simulation runs until one of the fighters is able to act. Shown above, the blue stickman is able to interrupt his attack when it hits the opponent.

If one fighter isn't ready yet, be they still reeling from a blow, or in the middle of an attack, they will still be given a turn. However, this fighter will have limited defensive options, and will not have access to most of their moves.

One such defensive option is BURST. You may use it at any time, even while being comboed, to escape. However, it is quite a vulnerable state, and if the opponent predicts you will use it, they may net another high damage combo.

Once you have used burst, you must wait some time before using it again.

The other defensive option while taking hits is DIRECTIONAL INFLUENCE, or DI. DI affects the direction and speed you are knocked back the next time you are hit. The force DI applies becomes stronger as the combo goes on. The opponent does not know which direction you will DI, so it is important you mix it up to escape combos early.

If you are not being comboed, but suspect the opponent will attack you, you can PARRY. Parry allows you to counterattack any strike, rendering you immediately actionable while your opponent is forced to finish their attack recovery. Missing a parry, however, renders you vulnerable to delayed attacks. Additionally, parry always loses to grab moves.

As you land attacks, successfully parry opponents' attacks, and move toward your opponent, a SUPER METER on the corner of your screen will begin to fill. When it is all the way full, you gain a SUPER LEVEL.

known bug—sorry, the game is just poorly optimized and the screenshake goes out of control if the FPS gets too low... will be fixed in post-jam version

how about instead of locking you out, they make you lose a chunk of the hunger meter? or the "sick" state just makes you hungrier faster :p

you get health from killing enemies :) happens more often the lower your health

thanks man im glad you enjoyed

you're the 2nd person level 2 is crashing for... most interesting

will try to see if I can replicate and fix. thanks :)

you are awesome for playing it

thanks man! ty for the video

thanks man. really stoked you showed it to your friends lol. appreciate the feedback. making the game clearer to understand is a big focus moving forward

this is how it used to be—i think I'll reintroduce it but at a much smaller degree of health gain. was just too OP before and couldn't figure out how to balance it

weird about the false positive... I'll see what I can do. camera zoom is by far the most common complaint, so that's already fixed in my current build—it will be far more configurable and adjust for different resolutions :)

thank you for the advice—i haven't had the chance to play bearcycle this time around but I will soon.

you can reflect missiles by using the slice attack :D

Thanks! you are going too easy on me with the feedback lmao. much appreciated