Thanks for the update! Its been awhile since I was last here, am I able to play it now? I'm really looking forward to it.

For some reason I can't play the game, says it can't run on my pc. plz help.

This was actually enjoyable.

Day 3.3 I have finished the entirety of the the game in a staggering 4 hours since my last post. I regret nothing, but if I did it would be that now I can no longer play this MASTERPIECE of a game! The level of content in this game is just amazing, and the story is so well written. I'll admit it was a little trial and error getting those last few endings, but it was worth once I got the BEST ending(s). The secret ending obviously, I mean come on, you can't argue with me on that one. And Sylvester's Route, not because it was the hardest to find therefore making the validation I get from beating it all the more rewarding. But because it had some of the best character interactions in the whole game, and it had one of my favorite character the Master.

He is so funny and crafty, and just annoys the heck out of Marion. I love how he just kept eating and causing Marion so much grief. Everything he does is just all according to keikaku. And Annette, poor, sweet, overworked Annette, arguably my favorite character just from this Route alone. Someone should really help her out, doesn't seem like she's getting enough of it. And can I just say, Sylvester must give the best hugs. Marion looks so at peace, he looks like he's hugging a cloud. But honest, I liked Bunnie more than Sylvester. We've been through so much together, he's near and dear to my heart now. Anyways, I had so much fun playing through this, the character were memorable, and the plot was interesting. You just shot way up my list of ppl whose games I love, right up there next to NomNomNami. I will be watching you from now on. Take that as you will.

PS: After having complete the game I have come to the conclusion that there are only 4, possibly 5, girls in the entire game. I will now list them:

and possibly that reporter pinwheel toy. I swear if you tell me I'm wrong I'm gonna lose it.

Day 3 since starting Jack-in-a-Castle, I have achieved 4 endings and am currently on my way to a 5th. My face hurts from smiling too much, I can confidently say that this game is just as amazing as the hype made it sound, and totally worth the price. Its very well polished, the story really pulls you in and doesn't let go, the soundtrack is bumpin', and the characters are like, SUPER cute. In fact they are too cute, to the point that I was convinced Bunnie was a girl despite the game telling me numerous times that she's definitely not, I still have my doubts to this day. And I kid you not, for the longest time, I did not realize that Marion Marionette, the one with the feminine sounding name, was in fact not a female. I know crazy right, its almost as if this game is about gay romances.

I first had my suspicions after the one and singular instance, so far, of someone using a pronoun to describe Marion, but I simple disregarded it as a typo. Then there was that one really cute scene after Marion saved Bunnie in his route, but I didn't think much of it. After my 3rd ending, my doubts had grown to the point that I could not deny them anymore. I took a moment to rethink everything I knew about Marion. Because a certain something happen between a certain someone in Bunnie's route, I concluded that Marion was a girl... But they didn't HAVE to be a girl.

But Marion wears a dress i thought, but is that REALLY a dress?  Looks more like an apron if you ask me. As i was having this internal dilemma in my head, the part of my brain responsible for good ideas said, "Why not just hide the UI and see for yourself,". And so I did, and it was indeed an apron. Having experience from the whole Bunnie fiasco, I resigned myself to believe Marion was male, but i left a little space to believe that they could be a girl too because I HATE assuming genders.

It was not until i came back here to write what was suppose to be a mini review that I learned the truth. Its amazing what you can learn from watching a trailer. What occurred to me after awhile is that, I read the synopsis before getting the game, and it CLEARLY says Marion is a guy. But i guess when you're excited to play a game you don't really focus on anything else but playing that game. I feel this whole experience was like an added mystery for me to solve and it made it more enjoyable, despite the fact that there was no mystery at all and everything was clearly out in the open and I was just being a dummy, but I digress.

In conclusion, this game is too adorable for its own good, I like overthinking things way more then they need to be or should be, and I should take better care to read and REMEMBER what I read so situations like this happen again. But it was a lot of fun so I might not. I'm looking forward to more shenanigans, I'll keep it brief next time.

Yo. This game. Is the coolest shit I've ever seen. I just love everything about it. The art style, the eerie and festive music, the foul and frank nature of the narration, the UI is also kinda nice too. Hearing the individual characters thoughts made it easier to connect with them and their motivations. Honestly this is one of the best things I've seen on this site, made my week bro.  Keep doing what you're doing.

Now if you'll excuse me, I'm gonna go check out this "Jack-In-A-Castle" I've been hearing about. Looking at your track record, I'm in for a treat.

Found a single typo four three lines after the fiancee shows up, other then that everything was great.

Found a small dialogue issue during Vex's encounter on a scout tile. It show Vex's name over some text that's suppose to be narrated. There was another dialogue issue involving Vex, but I can't remember. 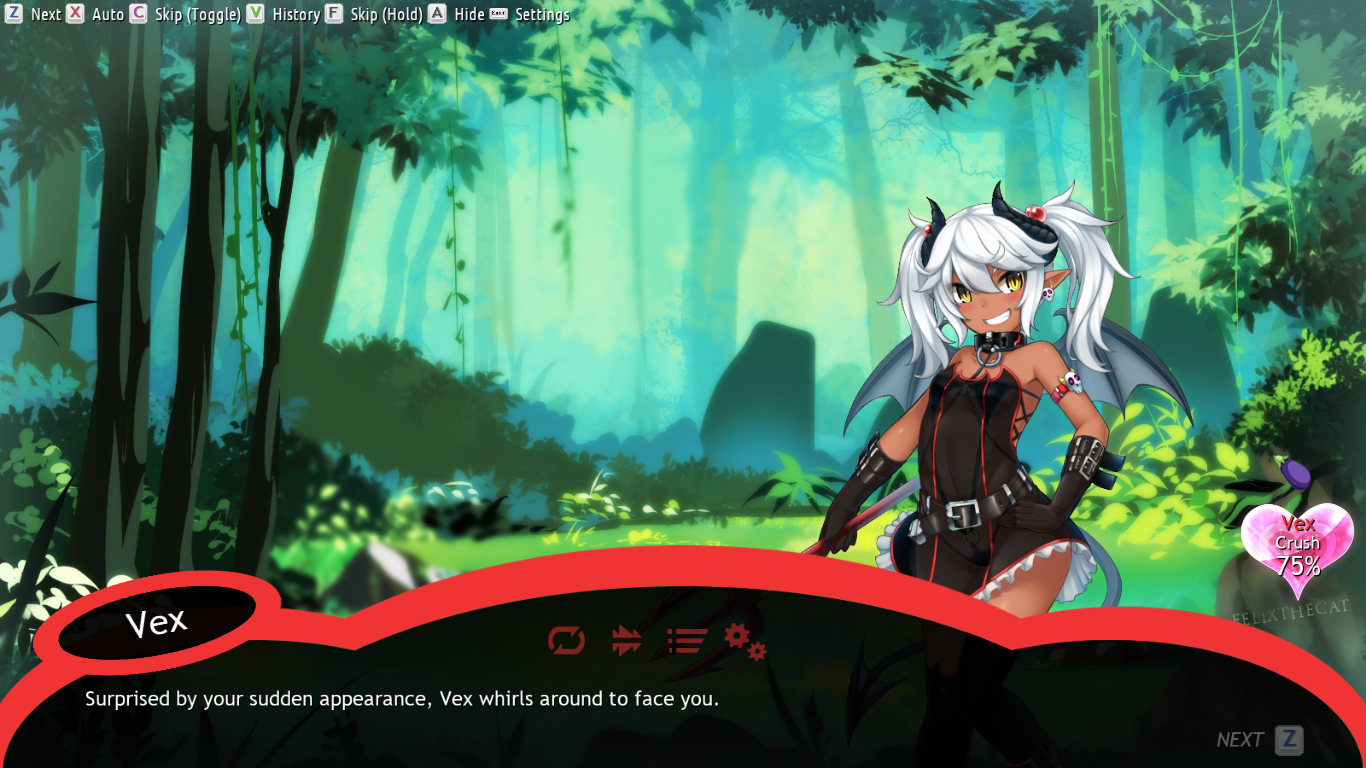 What do you do after you tame Daisy?  Laurel hasn't given me any new quests, I've done her side quest, tamed the Monarch, and bought the mysterious lens. I can't reach the Lady in Black because she won't take my calls. Hold on, I just found out you can activate the lens, what does it do? Is this the end of the update? Plz help.

Edit: I just figured out what the lens does ; ) Nice feature Haremondev

Doesn't work on Daisy's turn thou, I think the game still thinks it's her turn so it makes sense that you wouldn't be able to use her skill. But you can get around this by having another party member have the same skill.  I've tried this myself so I know how useful it can be, but I also know that anything useful can be abused. Cuz I've definitely abused it, so do what you gotta do, or you could keep it in and let whoever finds this clever little trick feel good about themselves. But you should probably get rid of it, for game balance sake.

Like lets say it's Aqua's turn, and the party order is:  Aqua Daisy Vex

And you change it so that the party order is now: Daisy Aqua Vex

Aqua and Daisy switch tiles then Daisy moves from where Aqua was to a new tile. It doesn't sound game breaking by itself, but I put Daisy in the party for a reason. If you use this bug to get Daisy to the exit, combine that with her skill that lets you bring a person to the tile she's standing on, than you can clear the dungeon easy.

*Sigh* I really don't wanna do this, but I love this game and I want to help make it better, so I think you deserve to know. There's this bug during a dungeon crawl, where if you go to your phone and change the order of your haremon, whichever haremon was suppose to go on that turn is switched with the haremon that replaced them in the party order.