Lastly, I'd like to apologize for using two lastly's. Or is it three now? Technically it's four.

Thank you for the kind words Katharina!

Feedback like this fills my heart with joy! I'm so glad you liked it!

Hi again Dominic. Just wanted to let you know that I received confirmation that the refund has been actioned by the itch support team.

You should see your $1.00 returned to your account in a few days.

I hope you have a fantastic weekend! Stay safe, have fun and make smart choices. <3

Reply
Infinite Stars - The Visual Novel community » Community Corner » Community Discussions · Posted in Why can't I download the gane I just paid for?
InfiniteStars110 days ago

Hi again Dominic. Just wanted to let you know that I received confirmation that the refund has been actioned by the itch support team.

You should see your $1.00 returned to your account in a few days.

I hope you have a fantastic weekend! Stay safe, have fun and make smart choices. <3

I have emailed Itch Support to action your refund for you. (You are CC'd in the email)

Reply
Infinite Stars - The Visual Novel community » Community Corner » Community Discussions · Posted in Why can't I download the gane I just paid for?
InfiniteStars111 days ago

I have emailed Itch Support to action your refund for you. (You are CC'd in the email)

I'm terribly sorry that you feel this way. I will gladly refund the $1.00 you paid.

The game is free, and there was no need to pay for it. The android version is for Patrons, not as a subscription but to help fund the ongoing development being done by a solo indie developer from South Africa creating the game from my savings. I'll escalate the issue to itch.io and get your money returned to you asap.

Reply
Infinite Stars - The Visual Novel community » Community Corner » Community Discussions · Posted in Why can't I download the gane I just paid for?
InfiniteStars111 days ago

I'm terribly sorry that you feel this way. I will gladly refund the $1.00 you paid.

The game is free, and there was no need to pay for it. The android version is for Patrons, not as a subscription but to help fund the ongoing development being done by a solo indie developer from South Africa creating the game from my savings. I'll escalate the issue to itch.io and get your money returned to you asap.

If you prefer not to share it outside of the community, that's also fine!

Thank you for the kind words! We were just having this exact conversation on Discord.

There are a few other practical reasons behind it, and some creative ones came from the Discord discussion; my favorite is that it's the V-Neck of the future.

You are right. A lot of thought, love, and resources have gone into the project, and it's something that I intend to work on for many years to come. <3

I enjoy crafting the choices, and I approach them like "running jokes" in some sitcoms, where they keep coming back in future episodes, even if it's just a line or two. I feel it makes the world feel more reactive and alive. The flip side is you can't allow them to run away and have a life of their own, so I *try* to limit hard branches to around 3,000 words before they have to join up with the main storyline again. Infinite Stars might not have tons of replayability, but I want it to be a unique, personal experience that follows the career of your Mah'Abeu over several years. A second play-through should still be refreshing, with lots of unseen content, but it will be the same story. I did a write-up about the design process on Patreon a while back, comparing it to a journey. You might drive or fly to your destination, and it will be two different experiences, but you'll still end up at the same place regardless.

Thanks for catching the typo! It's fixed now and will reflect in the next release!

You're absolutely right! It's fixed now! Thanks for taking the time to report! <3

Ahw! <3 Thank you! Come join our Discord server.  There are some screenshots of the update that will be releasing later this week. (There is also some lovely fanart!)

Only a pleasure! I hope you enjoy the game! <3

There should be a status bar on the top of the screen showing disabled or enabled - and it should be saying enabled! :)

I actually did a whole write up about the ship!

A lot of thought went into the design, and you can see the process here.

I agree about The Expanse. It's a must watch! <3

Ren'Py tends to generate false flags sometimes. I had a real struggle with the second episode earlier this year.

I did do a check earlier before uploading, and I know Itch also scans all uploaded files for viruses, so you are safe! <3

You're welcome to check virus total. It scans the file with 62? different antivirus programs, and from those, 2 obscure engines identified it as a Trojan, and the rest gave it the all clear. It's safe to assume it's a false positive.

If you are still unsure, you are welcome to reach out and I'll see what I can do!

Ah, Thanks for clarifying! <3

We have a bunch of Sci-Fi themed CC assets available for anyone to use, with a few more coming this month. I probably won't be using these for Spooktober, but anyone needing portraits with expressions are welcome to use them.

Hey, are we allowed to use creative commons assets not developed by us for the jam? Specifically music tracks, sprites etc? Or does it have to be original artwork and music?

<3 thanks for the feedback! I'm hoping the next installment will be even better!

OK, I did a few more tests and rescanned my system just incase, and I'm sure it's just a false positive.

Anyone else is welcome to chime in and confirm after they've done some testing!

It might be a false positive. This build was compiled with the newest release of Ren'Py so I wonder if a bug slipped in. To be on the safe side I'll run a few more tests, just to make sure my system isn't infected.

That can't be right. I'm checking it out now.

Ahw! Thank you! If all goes well, the second episode will be free to play around Christmas this year! I also noticed you just signed up to beta test the episode for us, so thank you for that!

And thank your friend for us! I firmly believe in word of mouth!

This isn't a brand new project. We've started working on it before November.

Hey, I just submitted our game, but I didn't see anywhere to mention that we've been working on this for a while?

So much has changed! We’ve been spending most of our time on Episode 2, but during down times we’d circle back to Episode 1 to fiddle and polish it a bit more. I think going back to improve existing work is something that we’ll continue to do.

Episode 2’s patron release is just around the corner, and the story continues after Mayvheen and Veera returned to the UIC Tabitha. (You’ll get to meet several new characters, and get your first peek inside the Concordat Cruiser)

We’ve added the long awaited Veera’s armor sprite, implemented the correct backgrounds, made some minor story changes, added new music tracks and also added a short, tongue in cheek scene after the credits. There’s more, but it’s too much to mention here.

We hope you enjoy the update to Episode 1, and we’re so excited to share the next episode with everyone! You can try the game here!

Hi, we recently released two, new, free portrait packs with expressions for you to use in your games! You can get them by clicking the images, or alternatively you check out our main page where you'll find all of our existing free assets (Don't forget to hit follow on itch so you don't miss any new releases!) 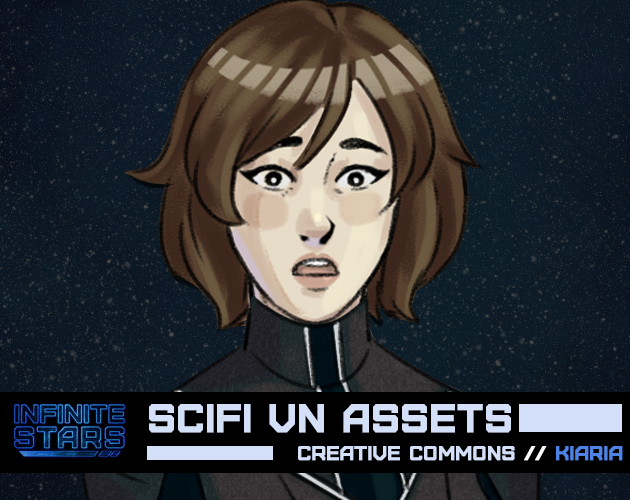 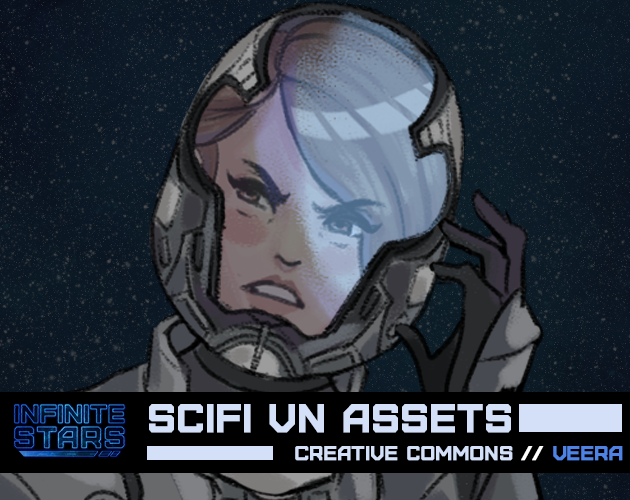 Lastly if you'd like to support us in creating more free assets (while expanding on our "pay what you want" visual novel - Infinite Stars) please consider supporting us on Patreon! All funds raised go straight back into the project!

We're always adding more free assets for the community to use in their non-commercial projects. All assets are licensed as Creative Commons.

Here is our list of free assets on itch. It's mostly character portraits with expressions and a few backgrounds. Give us a follow on itch if you don't want to miss any new free releases.If you need full body artwork, you can also peek at our patreon.

Good luck with the jam, and if you do use any of our assets, please let us know so we can help promote your project! <3 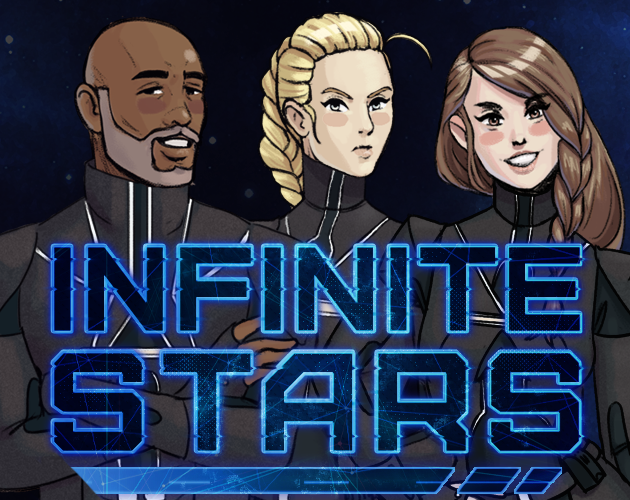 Reply
Finish Your Visual Novel community · Posted in Welcome to the jam!
InfiniteStars1 year ago

Hi Terra, is releasing a new episode for an existing VN acceptable? If so we'd like to enter, but we don't want to game the system!

Thanks! It's really encouraging to see posts like these! We hope the second chapter won't disappoint! You won't have to wait too much longer!

Great! We'll make sure he's one of the options for our patrons to vote on! Do you want to write a short bio for him that we can present? :)

Thank you SO much for the heads up! It's fixed. Seems like the download was hidden - probably due to a misclick. We really appreciate you letting us know

This has to be one of the top 5 cutest cats we've ever seen! Looking at the 3rd picture, I can see why you named her Toothless. She looks exactly like the dragon!

Good luck and thank you for the entry! <3

Congratulations on the wedding plans! :) When is the big day?

Infinite Stars is an interactive, science fiction visual novel licensed under a Creative Commons license. (We want everyone to be able to play the game for free, while also encouraging them to create their own stories)

It’s a story about a future where we have overcome our differences, and are truly a united collective. We travel the stars and discover new and wonderful species, their cultures and beliefs.

It’s inspired by stories like Dune, Star Trek and The Expanse. The world is hard science fiction, shying away from the more mainstream “science fantasy”

The story is episodic with meaningful choices, that echo and reverb in future episodes while still being feasible from a writers perspective.

Our art and music style is very unique, especially for a Visual Novel.

Thank you for the well wishes!! <3

We're excited and nervous at the same time!

Reply
Infinite Stars - The Visual Novel community » Community Corner » Community Discussions · Posted in Great game! Are we able to get the OST somewhere?
InfiniteStars1 year ago

I spoke with our composers. I can't make any promises yet, but it seems like we will be able to help you get your hands on the music. It might only be somewhere next week though.