This means so much to me! Again, thanks so much for playing. Seeing new episodes come out was the highlight of my day.

I do agree that the pacing is a little off in places- probably because I wrote the game in pieces instead of all at once. This is definitely something I want to work on in the future.

I'm glad you thought the characters had depth, as that's something that's really important to me. I wanted it to feel like this is Roslin's story, and she wasn't just being dragged through the plot by the LIs.

Thanks again for sharing your thoughts! Comments like this really make my day.

It's funny you say that, because I'm working on something veeeery interesting atm...

The reason there is still a lot of mystery at the end is because I have a sequel planned. I'll try to answer your questions as best I can without getting too deep into spoiler territory.

1. The entity talking to Robin at the end is only pretending to be Fletcher. That's all I can really say about that, haha.

2. You don't get to know much about Shay's family because Shay himself has been kept out of the loop. (You'll learn more about this is in the sequel.) As far as he's aware, they're an organization of mercenaries.

3. Fletcher is forced to follow a set of rules in order for his spell to work- One of them is that he must use a name in his questions. The name will work as long as it's an alias the person is currently going by. The rules change depending on if he's using their true name or an alias.

4.  The elegant woman and her husband did make it out with the help of a young witch pretending to be a train attendant. You'll likely see them in the sequel :)

I uploaded a new version of the file! Unfortunately, I don't have a mac to test it, so please let me know if it still doesn't work for you.

thanks for playing, and I’m glad you like it!

According to a popularity poll I ran a while ago, Jay is the more popular of the two. So yep, you’re in the minority for preferring Wren, haha.

Thanks for letting me know! I’ll try to figure out what’s going on and get it solved soon.

Thank you! I’m glad you liked it.

I'm glad you liked the game! Thanks so much for playing :)

Ah, thank you! I'm glad you liked it.

Thanks for playing! I'm glad you liked the game :)

Ah, thank you so much! I'm glad you liked the game.

Thanks for playing! Connor is quite sweet despite his general grumpiness. I’m excited to show more of his and Flora’s relationship in the future.

Thanks for playing, and I'm glad you liked it!

I'm happy you want to see more of these characters, but I view this story as 'complete' already. It's possible I'll come back to this world in a future game, though.

I'm glad you liked it and want to see more! I'm actually planning on making another small game featuring this group soon.

Thank you! I’m glad you’re liking it so far. And don’t worry, I’ll be taking a little break to recoup for a while :)

I'm glad it worked for you!

Hm, that's really strange! I'm not sure what's happening, but I'd suggest trying to install the game via the Itch app and see what happens then.

Hello! Here are the steps to extract the game:

If that doesn't work, installing the game via the itch.io app might help. you can find instructions for installing games in the app here: https://itch.io/docs/itch/using/downloading.html

Thanks so much! As for a Dan route, I don't plan on adding one into this game...

But I do have some plans for this year's otome jam.

Dex's little "sigh" animation is probably my favorite part of the game, so I'm glad you singled it out.

I'm also happy to hear you liked Seren. I was a little worried they would come across as too petulant to be likeable xD Though they have a pretty good reason to act the way they do.

That's really strange. I'll keep looking around for what it might be. Hopefully it's something I can fix for the full release!

Hm. I thought this might be a memory issue, but I ran the game while watching the task manager, and that doesn't seem to be the case for me at least.

I wonder if this happens for you with other Ren'py games. Have you tried deleting the game and re-downloading it? (your saves should be fine, as they automatically save to the appdata folder.)

Oh no! Sorry to hear about the crashes. Did you get any particular error?

Thank you! I appreciate it :)

Thanks, Amy! I really wanted to focus on making the dialogue feel 'animated', so I'm happy it came across.

Thanks so much for the feature! I’m happy my writing was able to get some laughs.

Ah, thank you! I’m really proud of how the dialogue works, so I’m glad you liked it :)

Thanks so much, Brii!

Thanks so much for letting me know! I checked the most recent game files, and it does look like I forget to specify which OS they were for. I've fixed it, and now the download files show up in the app!

I'm glad you were able to get it working!

It looks like you're using the itch app, so I downloaded it and tested it out. The downloads don't show up for me either when I try using the "install" button, and I can't figure out why...

However, you can still access the zip files from the app. Here's how:

First, when you search for Fetch Quest in the app, you should see a "download now" button on the page:

When you click it, it will ask if you want to pay for the game. You don't have to.  You can bypass this by clicking "No thanks, just take me to the downloads". 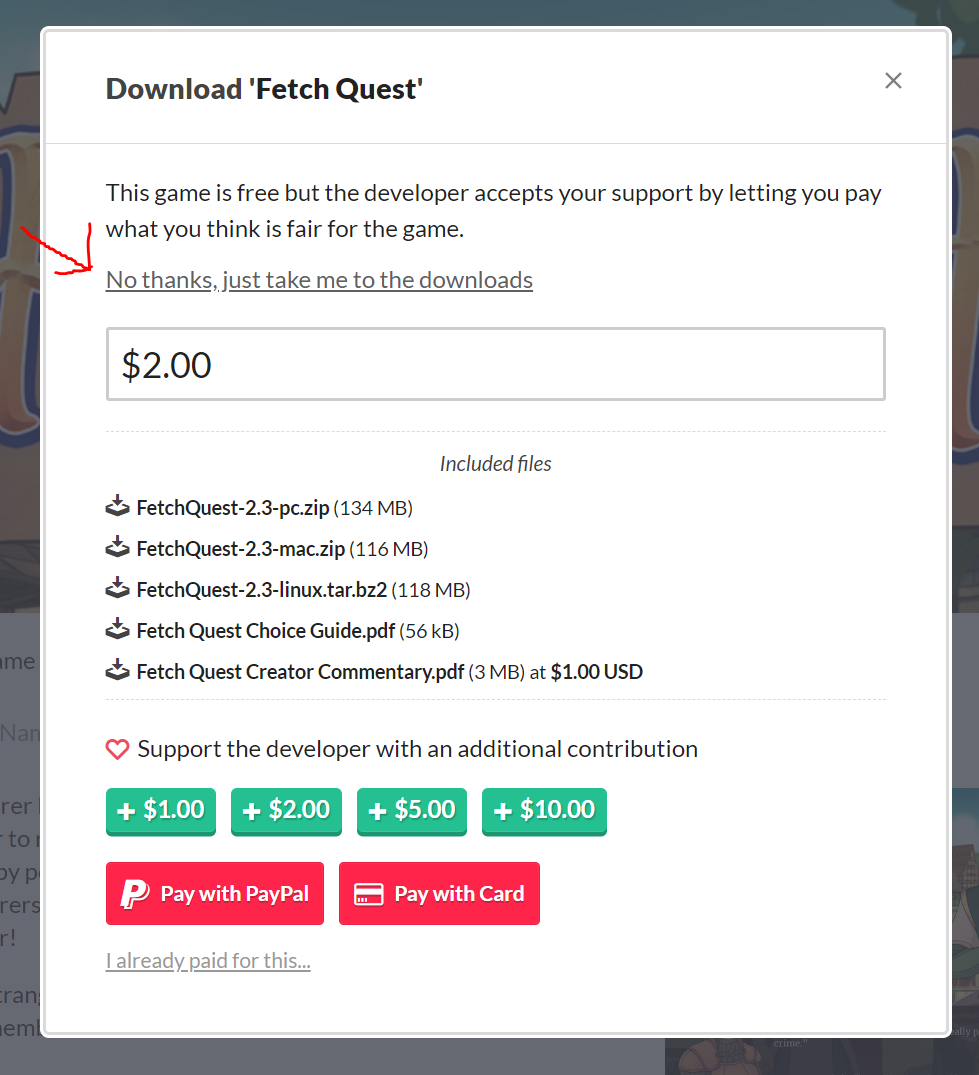 Then you should have the choice to download any of the game files, not just the guide. 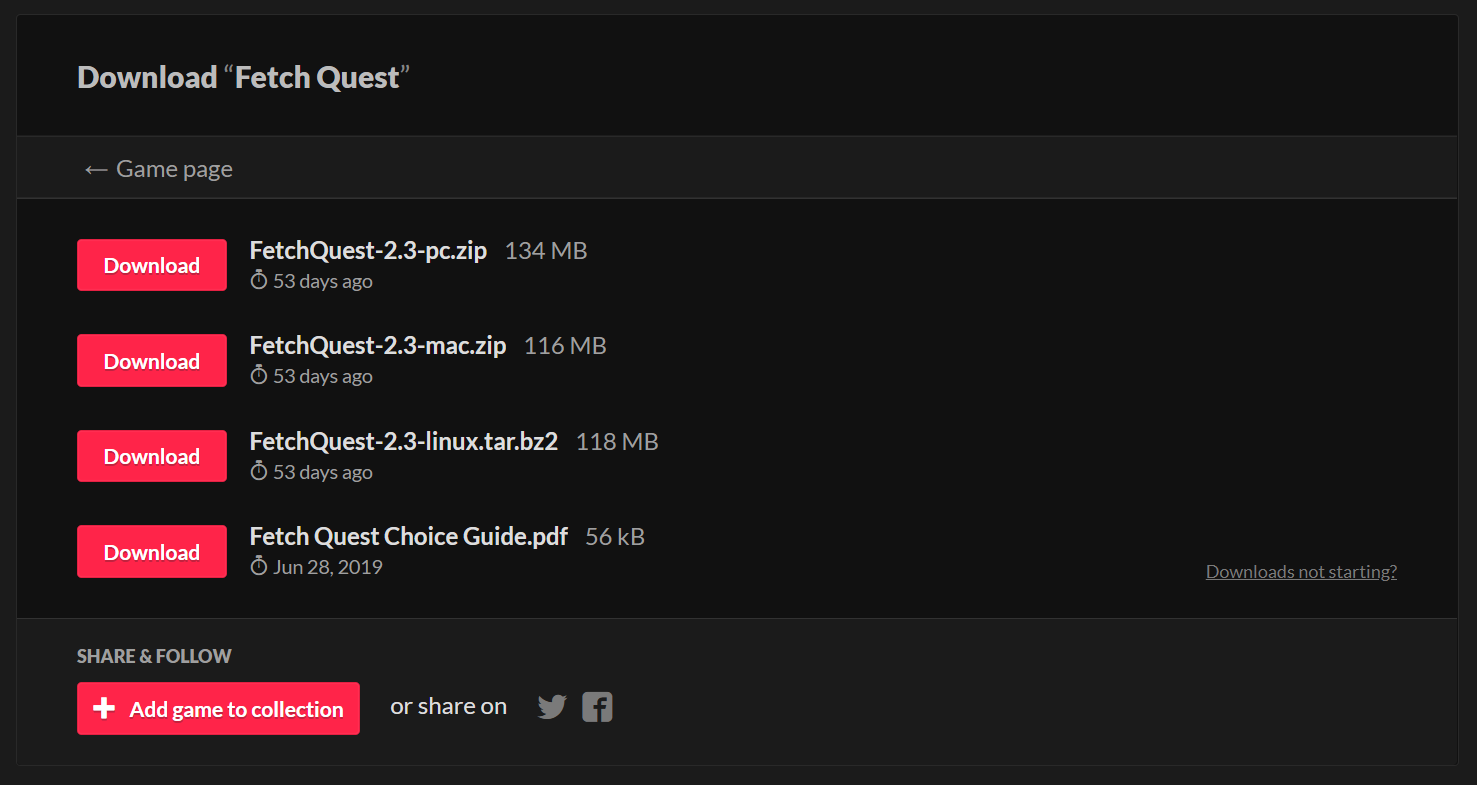 Hm, I logged out to see if the game was hidden from the download section, but I'm still seeing them. 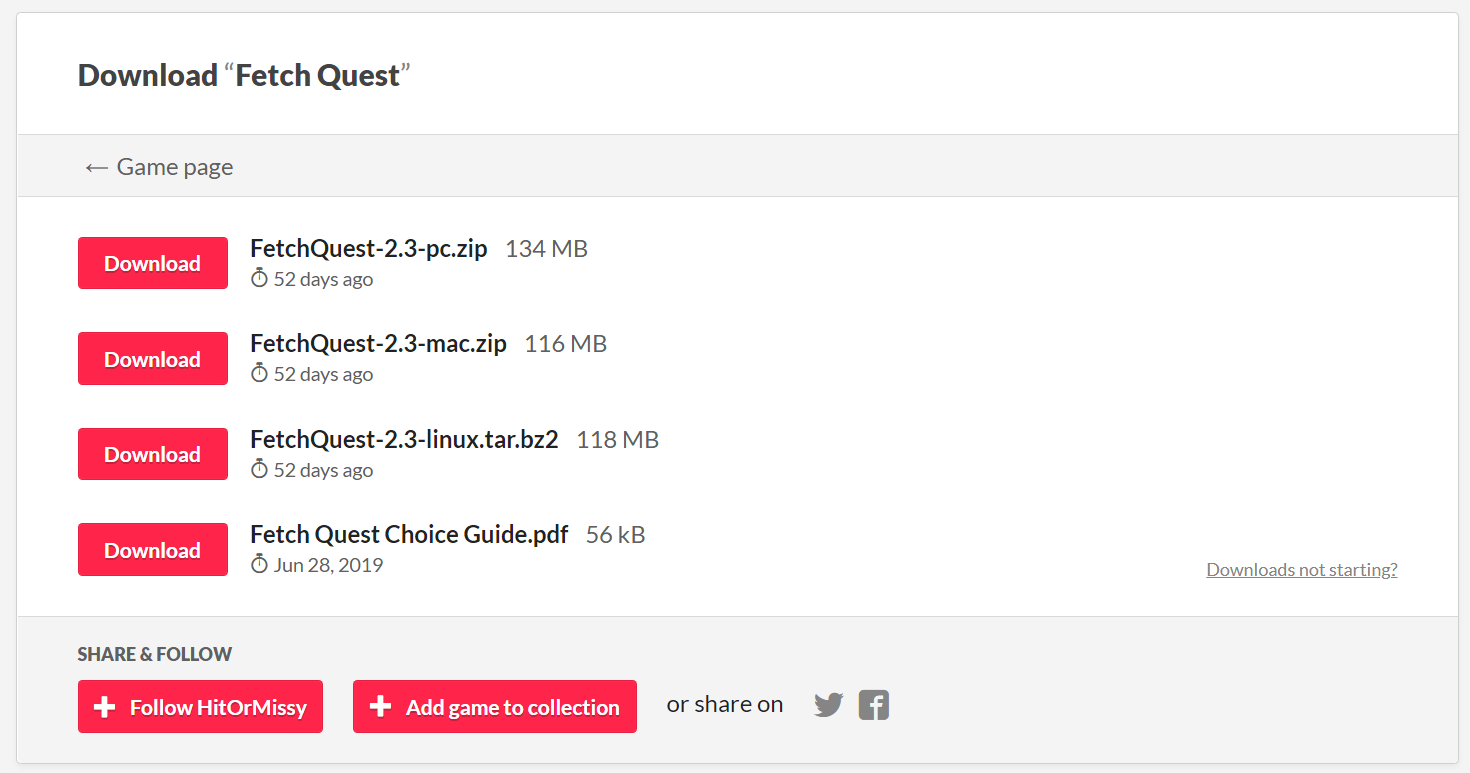 Could you send me a screenshot of what you see when you click download? I'm not sure why it isn't showing up for you, but I want to help.