Not the sort of noise I'd ever dance to. The only action my feet would be doing is running ... away ... from ;)

Thanks for the walkthru. Honestly, when I got put into the maze, I got hopelessly lost - due to mazes not being my thing for enjoyment, I closed the game and wrote my question because I was quite annoyed that I got put into a genre I typically avoid, but don't get me too wrong; I have and will play more maze-type games in future, just I'm not a fan of first person view types and in dark claustrophobic corridors. I may give the game another go now that you've gone to the trouble of writing a lengthy reply and link to walkthru. :)

Funny that you comment that, at the moment I'm looking at sprite, character creations, plus more - I'm looking to see what it takes to design my own game and how to go about it. I never learnt this stuff at school because back in the 1990's (and just when I left high school), my school was changing from pixel screen to colored.

oops! I died due to starving myself because I couldn't bring myself to slurping on a bottle of lard :D lol

Ok, I admit the word "Zine" is all new to me.. just then I looked up the meaning, and, yes, simply a magazine.. but how it's allowed on a gaming site beats the shit outta me

Waiting patiently for more content. I've played all the paths and excited to see where it goes :)

I get the feeling the creator is depressed and wants revenge on the world, thus brings his players down with him ;) Don't play at his level otherwise he'll beat you with experience - play a happier game from a different creator :D

Did I miss something? It's just a 16 page book

Did someone cast a spell on Bennett?.. his dick has gotten so huge.. but I like it :P I can imagine he'll split someone in half with that if it doesn't just make them cry :D lol

I came for the game, but stayed for the music :) It's like Pink Floyd meets 90's Sunbalm Techno.

Why do people have to make downloads so complicated.. why not just make it stock standard that is most popular?! ... I too downloaded both versions; as well as WinRAR, yet still crashes.. then I come here to find I have to have XInput??, which, from what I've read is an Xbox thing; which I've never had thus wouldn't know anything about it because I've never heard of it before now. Oh well, if you want to make something for the minority, then I'll leave it that way.

Easy little gem worth playing numerous times to beat your own score :)

Unplayable for English speaking only people.

*hangs head in shame for downloading this because nothing can be seen - it's just a voice recording of "I'm cuming, jeeeeez!"

With round 2 at 40% completion, what did you update a day ago?

It's been full on sex since Bennett and Tyler had their romp :P My cock is gonna fall off if you make any more raunchy than it already is :D Lmfao.... I nutted 5 times from start to end of the relatively short 4th update :D LOL

No don't change the sound of Leah HJ'ing Jason... I love the cheesy sound effects.. It's nice to have a laugh... and it's still nice to hear. got me off anyway. I jizzed 3 times already in 2 play throughs (for the different paths) :D

Short is right.. too short, but waaaaay too much reading for very little action.
Met guy at the bar, got tired of the amount of reading for a couple of choices , then game ended because I didn't get his number. SHEESH!.. could've at least let the player continue to meet the other guys and loop around until we get a pickup and then make the game end,... but sadly not by Dev's choice. I cannot see myself keeping this game in my hard drive. It's too boring.

Is the window meant to be only 1/6th the size of my screen?.. because the 'full screen' button doesn't work = greyed out. I can't see jack-diddly-squat at that size  :( 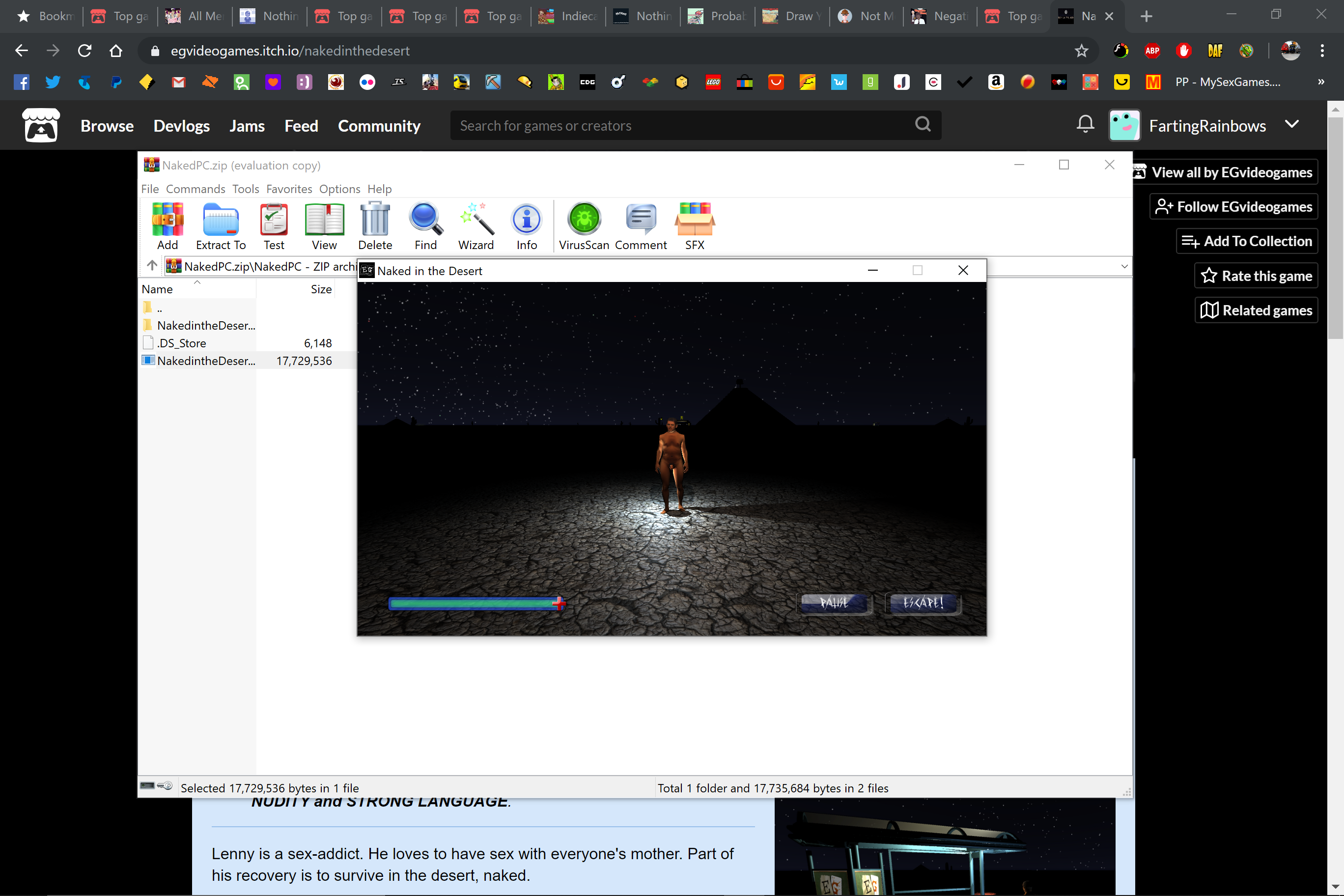 It's a fairly short installment but well worth it - it gets right (down into business) into the action very quickly; which I love :P

I'm pretty sure I played all 3 paths; unless there's more? not that I could find.

I agree with all of Kambledore's complaints? (more like minor errors; simply because it is your first installment; and fix up's can be done later) but can be easily overlooked with the amount of animation and sound effects you've put into this V'novel.

2 other things I'd like to point out is: 1) Jason's skin color went darker when he was in Leah's bedroom - there was enough lighting in her room for that not to happen... but hey, I have a thing for naturally tanned skin; so no major complaint from me :) .. 2) When Alice walked into Jason's bedroom and noticed his morning glory; which I couldn't take my eyes off neither .LOL. I also noticed Jason's left arm=inner elbow area = his upper arm muscle (bicep?) looked like a freak of nature, (or better said: Overdone art)? .. Kinda looks like the muscle or the arm was / is supposed to be longer but got cut short, or whatever... Again, another minor flaw that I'm not worried about.

Another thing I'd like to add is: I chuckled at the sound effects when Leah was HJ'ing Jason = sounds like gumboots treading in slushy mud :D LOL

Also... Have you got any involvement in another V'novel, called: Straight? (also another 3DCG (gay) V'novel in itch.io) .. because I noticed in the reading that Jason said: "No homo, *chuckles*"

Lastly... Will there be any gay sex scenes with Jason in the future? because what a waste if there isn't, hahaha... Cute Michael would make a yummy match (no pun intended).... Of course with these choose-your-own-adventure novels that it would be easy for the straight player to keep Jason on the Hetero path, but the game would appeal to an even bigger audience if the gay/bi/curious player could choose to take Jason down the gay path only, and appeal to an even bigger audience if the player wants Jason down the bisexual path. I'm gay, but I would play all options available; but you know what I'd prefer first :P hehe

Because I'm not a computer wizard; it took me 6 tries to get it running ... I also had to download the WinRar file; which I was still having grief until I figured how to get the game up'n'running. The update you did (non MEGA version) still didn't work for me - then after downloading the WinRar file, I then downloaded the 'here' option which finally made the game work :)

Sorry for late reply, been busy elsewhere. I will certainly give the new download link a try. Thank you for going through all the trouble just for me :)

I gave up trying on 3rd level. In my 25 years of playing video games, one gets very tired of being beaten by platformers that get too hard for its own good within the first half dozen levels. All I can say is; the reward had better be damn good to sit out the frustration of a boring platformer and also have access to the bonus content without having to go through the game itself all over again.

The end of the game left me feeling disappointed and confused. I got to the end of day 3 and all of sudden without warning I get: THE END - you didn't get to know the truth in time. As it was I scrolled through the long winded dialog with very rapid clickings... the story needs to made tighter without going off course so much. I also rapidly clicked through the story because there's not enough pictures to go with the dribble and drivel. Anyway, why doesn't the game just keep going instead of giving up on the player? The game doesn't allow the player to get everything done in just 3 short days. It's not like I died or something more sinister. Again, I'm very disappointed in the outcome and development of this game. Sorry, two big thumbs down from me.

I have downloaded the game (PC version) > Extract all > clicked on "Knockout_Master.exe ... but then I get a pop-up saying: "I'm sorry, but an uncaught exception occurred. IOError: Couldn't find file 'gui/window_icon.png'.

Also, upon clicking on "Download", I'm taken to another tab; titled: "WorkUpload", and in there the advertisement box says: "Requests to the server have been blocked by an extension." probably b/c I have adBlocker.

I found this game under the NSFW tag... Seriously, I see nothing that matches that tag.

Easily this game could be added to the gay section of the comdotgame site - there's quite a few games already there like this one :)

- Can't read the subtitles because I'm concentrating on the blue/white/orange rings.

= Hope to see more like this with possibly longer gameplay with shorter more easily read subtitles.

No I don't like it.... I LOVE IT :P ... Keep up the good work :) I don't care if it has flaws at first, it is still better than still pictures; even  though you're doing a brilliant job with them too-and even they have flaws, but because this title is still in development (and possibly commentators haven't commented about the flaws yet), it is still a very worthy game to have numerous faps at :D

Thank you. I did that within the first minute of playing the game but that didn't work neither, that's why I come to comments section to question. I currently have my sensitivity on 5,.... next time I'll try it on maxx sensitivity :)

What button do I press to pick up the coconuts? ..I've read all the comments below, and opened every link on the page.. yet, still cannot find the one crucial piece of information that's needed to know how to get some action instead of giving all the time. You should add the button information in the options area of the game.