I'm not Original Knightmare but I could reproduce it : 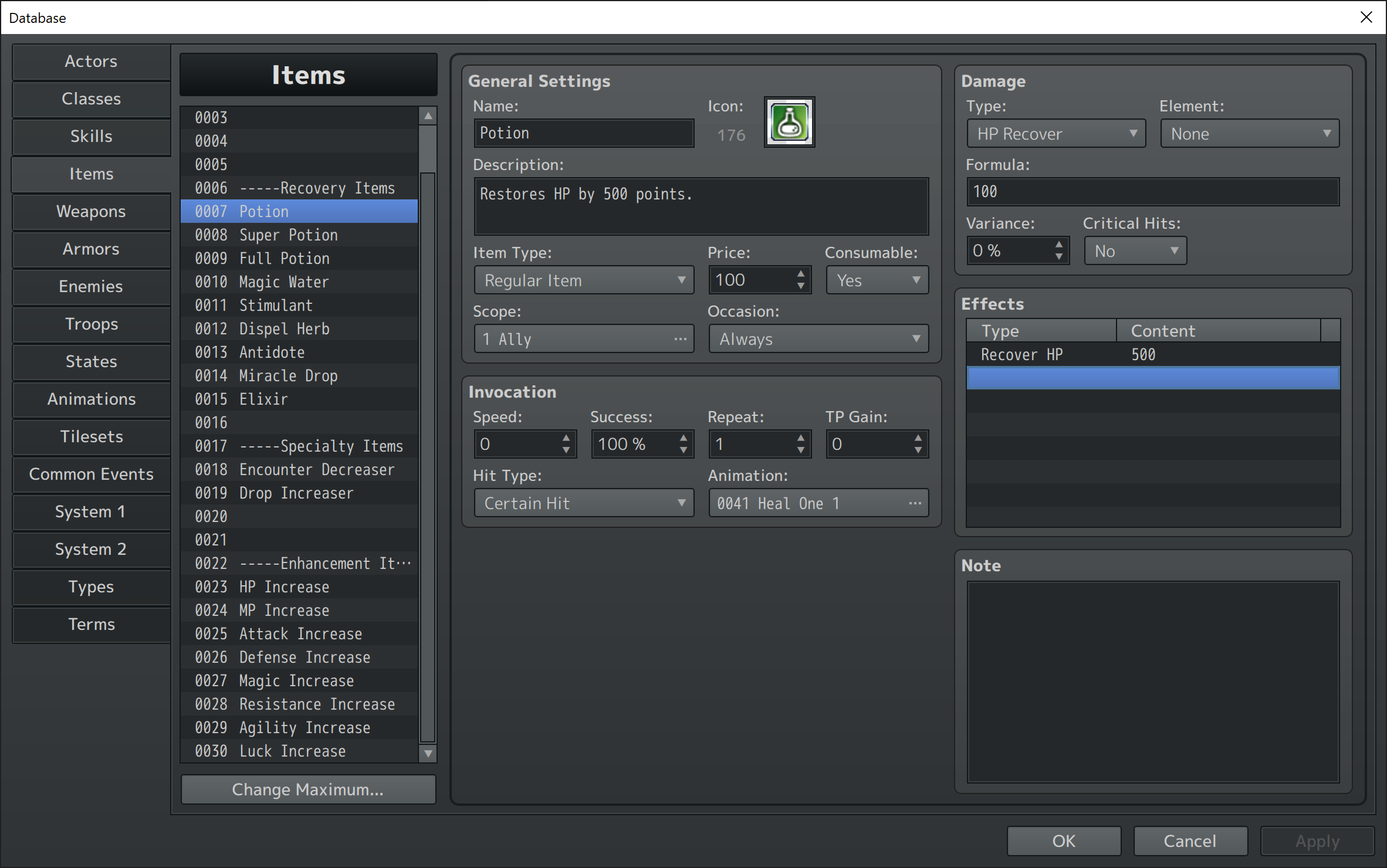 everything is fixed now, thanks, that was fast!

I have 2 little problems

Why does the enemy acts twice every turns?

but I spawn 2 of them, only one have the double action thing :

I really like the battle system but I think the HUD needs some polishing! 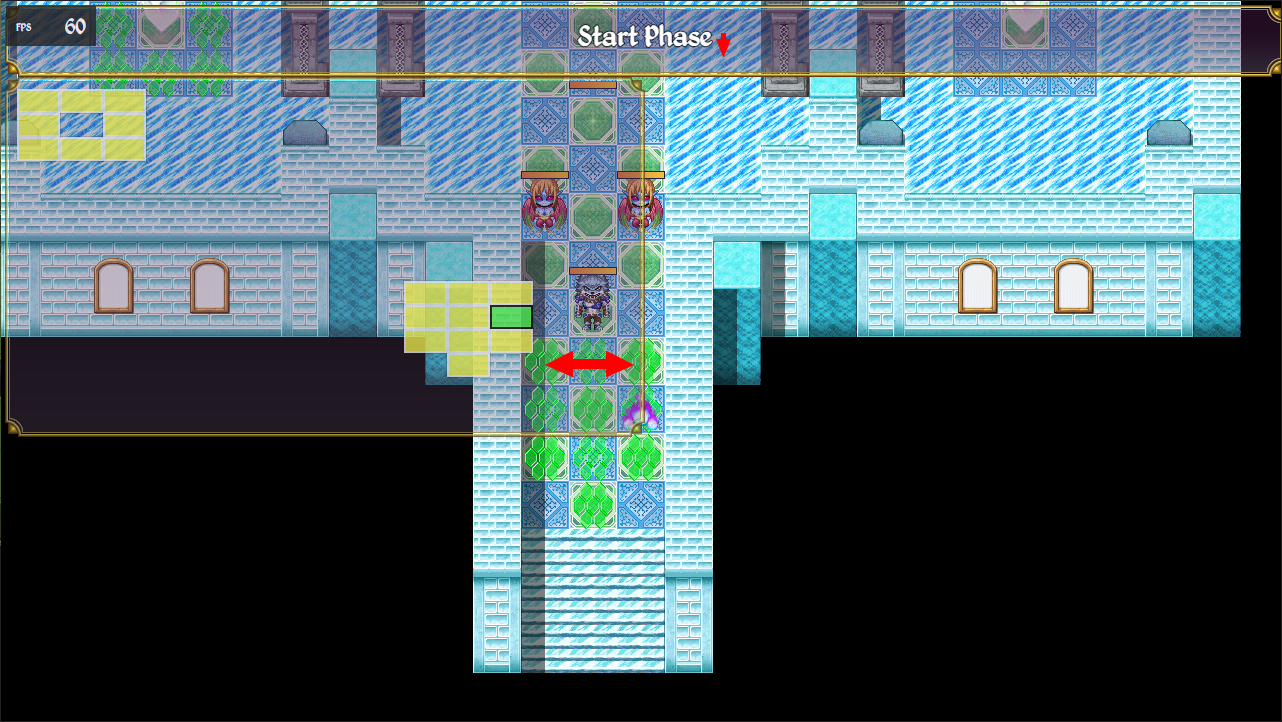 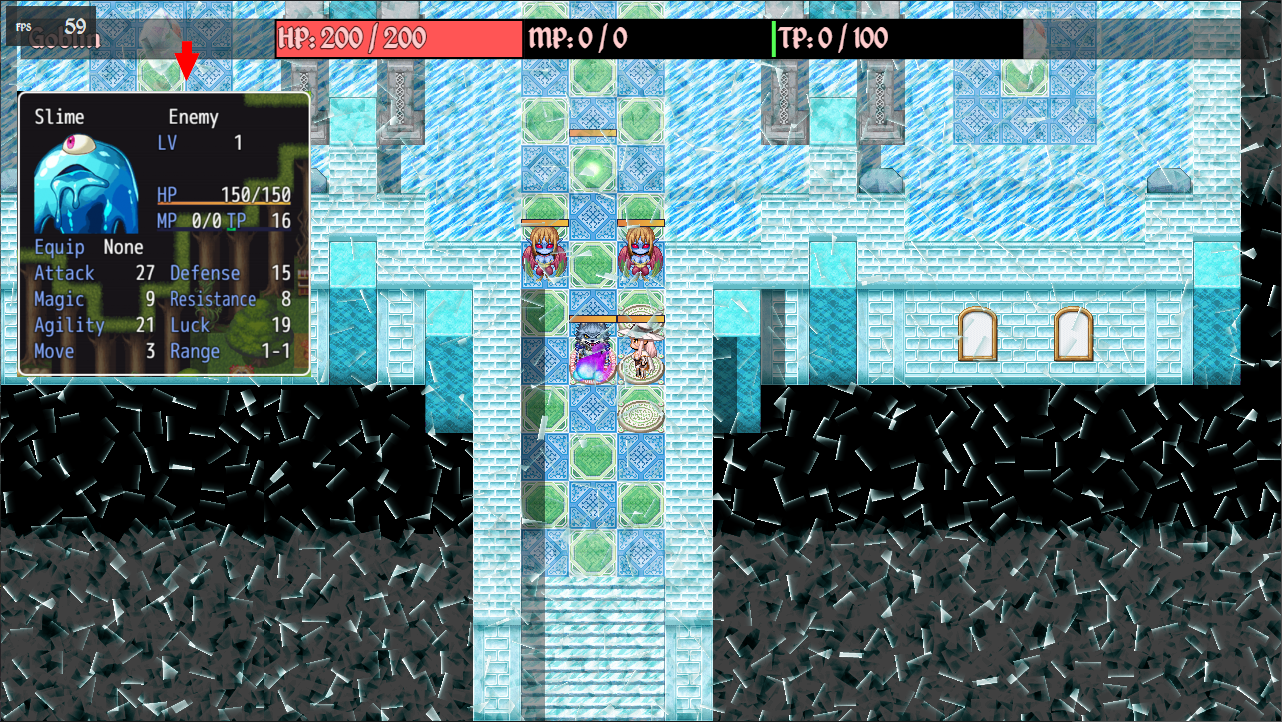 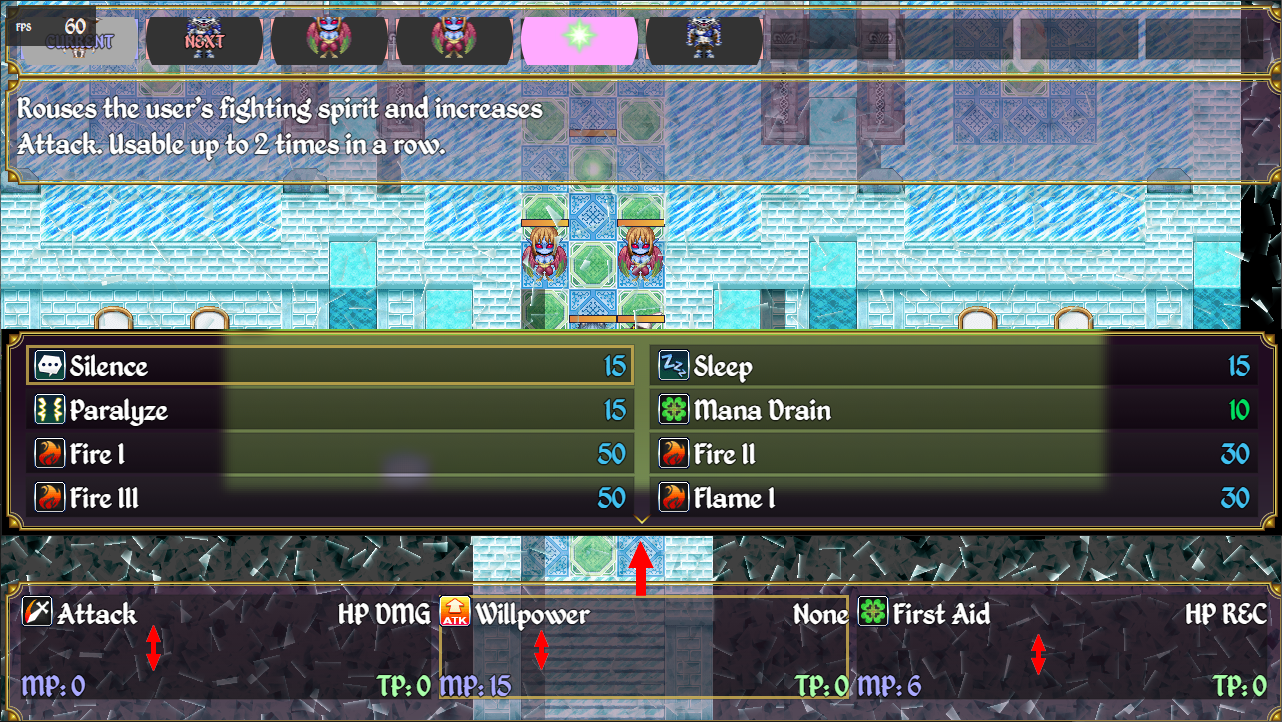 You conviced me, I'll buy it!

I'm interested by this but before buying I would like to know if there is AoE (area of effects) and if we can choose the shape of it? (circle/square/+shape cross/x shape cross/ combinaison of shapes)

is it possible to be able to target only in diagonal?

Is it possible to make a spell that heal an ally when cast on it but deals damage to enemy when done on an enemy when both are in the AoE for exemple with : "isEnemy()" in formula?

Is it possible to push/pull enemies and or allies and do pushback damage?

lay trap on the ground with a skill?

having a spell that turn your character invisible (change character to a dimmed version of it and will not be targeted by enemy)?

invert position of a character and an enemy?

Lift and throw an enemy?

teleport an enemy to an other location?

Is it provided with a demo that shows many things the plugin can do?

Is it compatible with Eli Book ?

Is it compatible with a plugin that can change the tile size?

Will this plugin have those features added over time if not present?

Will this plugin receive updates or it is basically in a final state with the 4.0?

Sorry, so many questions!!!

I think there is a problem with the 3.2.0 version of the plugin!

and changing here seems to work! but it is hardcoded!

I had trouble figuring why it was crashing in my project while it was working in your demo!

The most recent version uploaded here is 2.3.0 while in the demo it is 2.3.1 and it fixes the crash!

Very useful plugin as always, however there is a small error in the @desc of the 2.0.0 version :

@desc If this switch is on, the plugin will not add the common event.

It actually enable the common event when the switch is on!

I wanted this for so long!

Very simple, I love it a lot!

Is it possible to put a very simple formula too? (like previous level required exp +x or something like that!)

Custom parameter curve + static exp is a great combinaison, the perfect add would be the ability to remove database level cap of 99! (it was possible on MV but there is no plugin able to do this anymore on MZ!)

Oh, also I was looking for tabletop rpg fantasy maps and I found something that MIGHT give you an idea for you grid system on this store page :

Near the middle of the page, there is an animation of a modular arena, on twitter you said something about shrinking arena so that might be interesting!

And why not 9 grids and using the numerical pad like fighting games notation (example soulcalibur notation) :

It also opens diagonal ranges. The middle grid would be the Grid 5

Is it possible to download this and also download multi grid system for patrons (even if not finished) for some testing?

Some features, not all of them are good, just a bunch of ideas :

-Being able to customize the range colour of each skill individually with notetags hex colour <rangecolor: #ffffff> same with AoE color etc, if not found, use default (exemple for white magic, black magic etc.)

-Unidirectional range display for some skills (notetag?) : if the game only use 2 grids system, maybe create a system that show attack range only on enemy grid and heal only on ally grid (and put the cursor by default on the "good grid"? (but for some games there is sometimes people who want to heal enemies and attack allies so I think this is not important)

-Tie movement to a gamevariable or MP or TP or add a new movement "bar or points" and as long as you have some movement points, you can move as many times you want in your turn (before using skill or after using skill) (But also adding teleport move type that does not use movement points but mana instead for example)

-Being able to switch places with an ally or enemy (and also why not applying a buff to it), or lift it then throw or teleport it from a to b point (2 selection in one turn)

-Setting traps in enemy camp or glyphs in ally camps, just moving on it inflicts damages or buffs then disappears OR effect apply only while standing on it

-Invisible state, if all allies are invisible, enemies will hit somewhere randomly hoping to hit. Also why not chameleon enemies (but their info must not show when cursor go on their cell)

-Adding state that increase/decrease movement or skill range. (must create a notetag for skills not affected by boosted range or diminished range) (can't go lower than range:1 as a failsafe)

-Funny AoE, like lines, rows, checkerboard or custom either using an other map or a custom formula either on a json file or read as a notetag inside a skill

(Example x0y0 only hit the center, creating a + AoE would be : something like

-Being able to resurrect a dead battler at the position the battler died OR at the emplacement of the resurrect skill?

-PvP over online (yes I know I'm dreaming, even a simple select team against someone who did the same would probably too complex?)

I got a ton of other ideas but that would made the post even harder to digest, so I'll stop there!