Has the updated version been uploaded to Itch? The file listed above says it was added 11 days ago.

I noticed that if you press A while a flagged tile is selected, the entire game starts over.

Now that I’ve been able to transfer my data from NYT this has replaced my phone as my Wordle device.

I noticed a bug though:

Every time I launch the app, my dark/light mode and keyboard layout preferences revert to the default settings.

This is really great! In "Rotate System CW" mode the controls are as precise and intuitive as you can get on anything other than an arcade cabinet or Atari console (neither of which is playable during a commute). The crank position matches the paddle/vaus position 1:1, and the A button is perfectly positioned for firing when you have the laser power-up.

My only other suggestion would be to have the game area take up more of the screen while in Rotate CW/CCW mode (there's a lot of empty space and redundant logos). That would make the it pretty much perfect.

Thank you so much for adding the alphabetical order keyboard layout. As I suspected it is so much more crank friendly. And thank you even more for providing a way to import my stats the NYT website.

The Playdate has a system-wide upside down mode that inverts the screen for users who prefer to operate the crank with their left hand, but it has to be turned on/off in the console's accessibility settings. The accelerometer is reserved entirely for game developers and only rotates the screen if the game that's currently running enables it to do so.

In the current build, the crank and paddle positions are reversed in both Rotate CW and Rotate CCW modes. What I mean by this is that in either mode, when the crank is pointing to the player's left, the paddle is on the right side of the screen and vice versa. I think it would make more sense for the paddle position to match the crank position.

FYI: You Cannot Go Back uses the accelerometer to rotate the screen and despite the console's lack of a GPU this doesn't noticeably affect performance aside from a brief flicker if the console is rotated while a game is in progress.

I second this request. I've had the first tile I click turn out to be a mine as many as five games in a row.

This game would really shine in portrait orientation (Check out the game You Cannot Go Back! for an example of a portrait mode game on the Playdate).

The new build works great. Performance is much smoother. 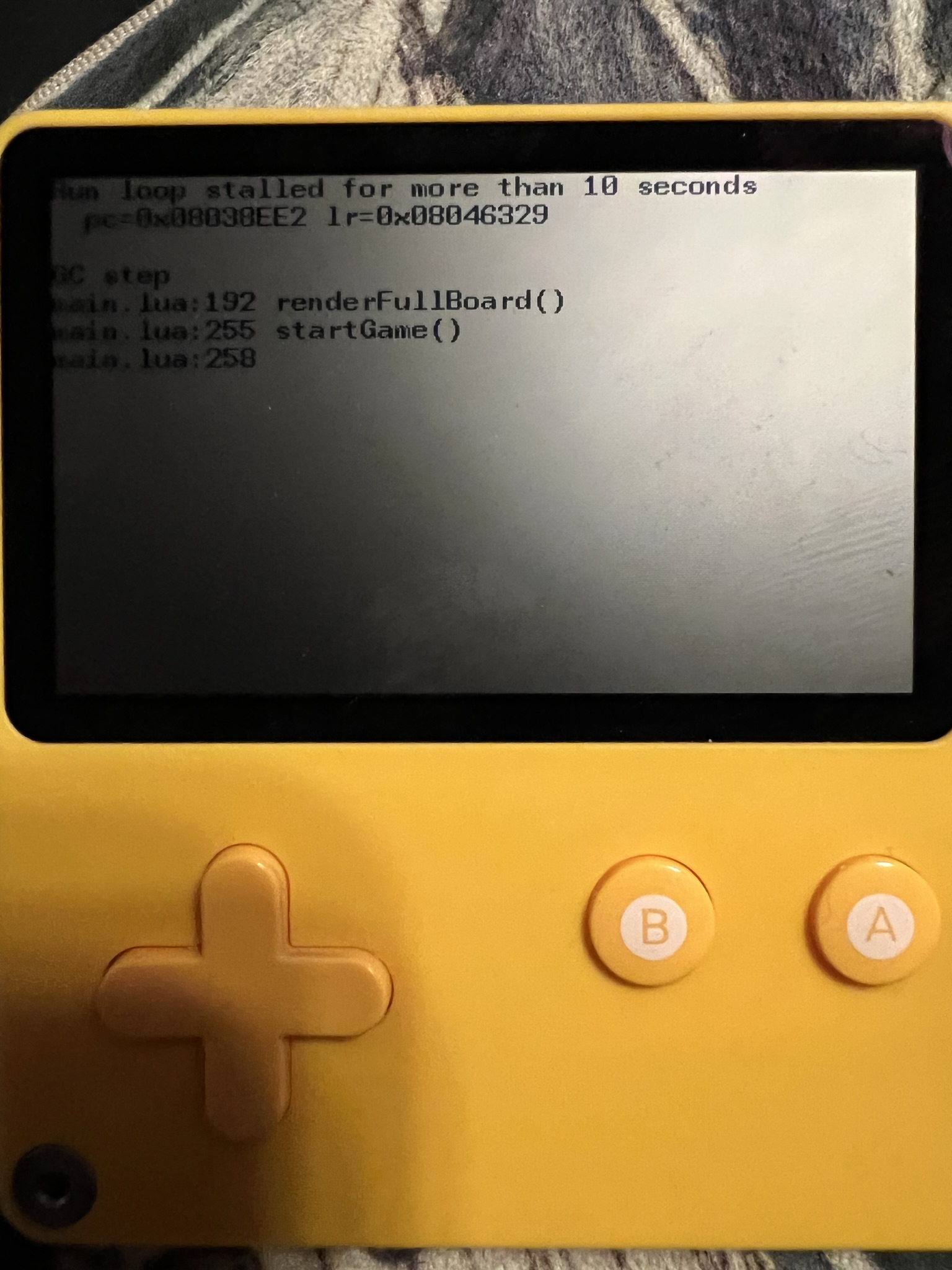 The sideloader gives the error "Could not find a top-level .pdx file" when trying to upload the ZIP file. I was able to sideload the unzipped PDX.

The downloaded file "LifeCounter.1.3.pdx.zip" shows as version 1.2 in the sideloader and on the device.

The sound effects are 😙👌

Both the sideloader and Playdate OS recognize 1.1.2 as a separate app rather than an update to the previous version.

When sideloading the ZIP file using the web sideloader I got an “Unable to download” error on the console. I was able to sideload successfully by unzipping and sideloading the PDX file instead.

The darker shading on misplaced letters is a huge readability improvement.
Crank scrolling through the keyboard is really nice, though I think arranging the letters in alphabetical rather than QWERTY order would make more sense.

The file "Yacht-1.1.pdx.zip" shows as v1.0 in the sideloader and on the console.

This is a really good start.

A couple of pieces of feedback:

- The shading on misplaced letters is hard to see because it's so light. I recommend making it darker.

- Wordle shades the keys on the keyboard according to whether they're correct/incorrect guesses, or not used yet. Doing that here would be really great.

The download named "Fishing Simulator v1.1.0.zip" still shows as v1.0.0 in the sideloader, in Settings>Games on the device, and in the About page in the game.

I'm getting the same error

Update: I unzipped and sideloaded the PDX file and was able to download that on the device.

Hold and shadow are major improvements, and the home menu card looks fantastic. This is now a really polished looking release.
One suggestion... I had the crank open when I first launched the game and thought that the update had broken A+B button rotation. I recommend adding a note to the game description explaining that the A+B button requires the crank to be closed (or enable them to work with it open, but that's more work)

FYI: The description mentions donations but there's no option to donate when downloading.

The new version sideloads, launches and leekspins on my Playdate. Thanks for responding and fixing it so fast!

Thanks for responding so fast. This time I was able to sideload the game successfully. I don't have time to play the game at this moment, but I confirmed that it launches on my console.

Now I'm getting a different error: "The version field is missing from pdxinfo"

When I try to sideload the demo to my Playdate, I get the error message "The buildNumber field is missing from pdxinfo"

I'm getting the error message "The buildNumber field is missing from pdxinfo" when I try to sideload the game to my device.