Gosh I can't decide who's to save for the last, Ben or Lou~

Oh nice. Good to hear. Do take your time though. If anything, I'm looking to see more of this VN :3

This seems interesting. Is this still being worked on?

But I'm curious about the writing. Are you making it to be slice of life drama or comedy? Partially at least? The story summary makes me kinda think it to be somewhat comedic...

I'm looking forward to see more of what's coming and I hope you keep working on this. This VN seems interesting :D

Hmmm... I don't know. For the time being, I think I like Alan more than Axel. Charming and more handsome too~

Could we rename Toby in the future?

Apparently even Philip is somewhat hunky now. I thought he was supposedly a nerd who found physical activity was not his cup of tea? Everyone is so hunky! D:

I guess gays really love muscles... I hope there's someone's more on the chubby side too...

So... is this still being worked on?

So... is this still being worked on?

Waaah I love dragons. Though I thought Henry was a love interest. I find it hard playing as someone hot 🤣

I'm following this. I could use more LGBT horror/mystery VNs. And I like Sal already~

I think a lot of people would disagree with you there 😅

That being said, I hope they keep this Juuichi's design. I actually like this one better than the original. He just needs more expression/gesture sprites~

Ah... I hope this game is still being worked on. It's really interesting from what I've seen so far. I'd like to know more about what is Rylee doing and more time with George

While so far we haven't exactly seen Hiroyuki, I figure we would eventually see him as a fox in event CGs, so I don't think it's avoidable for now :3

How do I get to hook up with Jimmy or Hugo?

I miss Morenatsu and after playing this again, this brings back that nostalgia I had once again with the characters. I like how you guys give more events and contents for the characters and make them more grounded. Soutarou and Kyoji especially have so many things going on this time. It's nice to finally be able to get to know them properly. The test of courage remains one of my favorite days and I can't help but feel you manage to make the aftermath of it much creepier on Shun's route for some reason. And apparently it seems you guys gave Nanafuse more things to do? Sweet~

Also, I'm liking the newer designs of the characters too. For the second I couldn't really notice what's new about Kouya since he looks like the original while Soutarou is aged up. Some of them gets new outfits too apparently. Plus, we get to see more interaction and relationship between Hiroyuki and his grandparents, which is very welcome since they seem to be just very minor characters in the original. It surprises me that he is now more considerate as well, when he first thought about how he basically used them as temporary shelter as he was wandering in Minasato. This wasn't addressed in the original and one of the things that made me feel bad about it back then. Everything is pretty well done from what I'm seeing so far

So... while I'm starting to be okay with the fact that Hiroyuki is now a fox, I feel like he does this "furry reminder" trope too often, like how multiple times saying "I'm a fox" and its variations. It gets too repetitive I think considering none of the characters say that about themselves and him too much. Also, it would be nice if we can rename him so that we can still experience that "self-insert" feeling

Hm... Sometimes the MC annoys me in Harold's route as of how he keeps promising to tell the team what's going on but then he forgets about it. It feel like he occasionally prioritizes love over friendships. Not that's he's close with them to begin with, but I think that's the issue...

It's one thing that if he doesn't promise anything or nobody asks how the Coach is. He doesn't even bother remember to tell them if they are going to have practice or not until the day. Even after Spencer told him where the Coach's house is and how he drove him there. I don't know, I just don't like how he treats him teammates in Coach's route sometimes 🤔

I notice that sometimes, when Andrew talks, his namecard shifts back and forth between white and green. Is it supposed to be so when he's offscreen and then green when he's on screen again?

I remember back when the first time I played this before it had only a few days of gameplay... and boy, how much things have changed. I'm liking what I'm seeing so far. Usually in furry VNs, not every single husbando interests me, but this could be the first. Anders in particular reminds me of my ex-boyfriend...

Also some of the backgrounds reminds me of Angels with Scaly Wings...

P.S. Maybe Torahiko could be a secret route of some sort? Because we all know he deserves a closure and happiness that is his own route, right? Right? 😛

So what does he mean with Housekeeping?

I hope this is still being worked on. Or at least expanded into a full fledged visual novel

Also, I'm not sure if it's just me but it seems like during Chester's route, just after he's proposing, I don't see any of their sprites emotes expression at least until the final day of staying in the hotel...

So this is Chester's room. Not sure if this has ever discussed before, but I think rather than making a separate screen for "click to inspect", you can just use the default background for the same purpose rather than having separate screen with different image, I guess? Not to mention, Chester's room in the point and click section looks somewhat different than the one used as a background. Just my two cents though 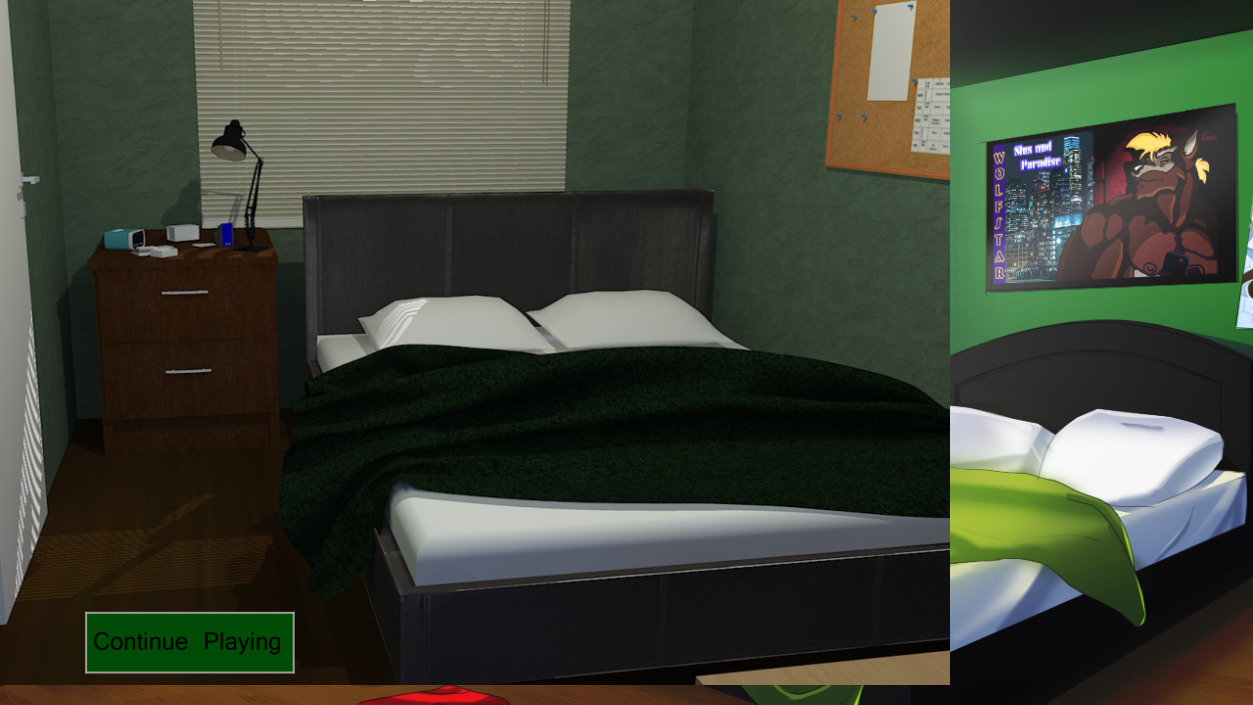 I'm glad you think so. Not everyone finds glasses cute or sexy me thinks. Thanks for even considering it :D

So this game is interesting, so far. I quite enjoy it. It's not everyday we get a horror/gay VN to begin with. And I also like how we are able to customize our own MC. And with that in mind... do you think you would also add some features that allow the player to select body type or wear accessories like glasses or stuff? I think that would be really neat.

I wish we get to see more of Lee and Derek. I really like them both. Is Derek romanceable for real to say the least?

Um... what about Chubby Cove? Heheh 😁

So, I think there seems to be an oversight. When all the crew's outfits are in pink, Bash's surprised expression has his outfit in default coloring 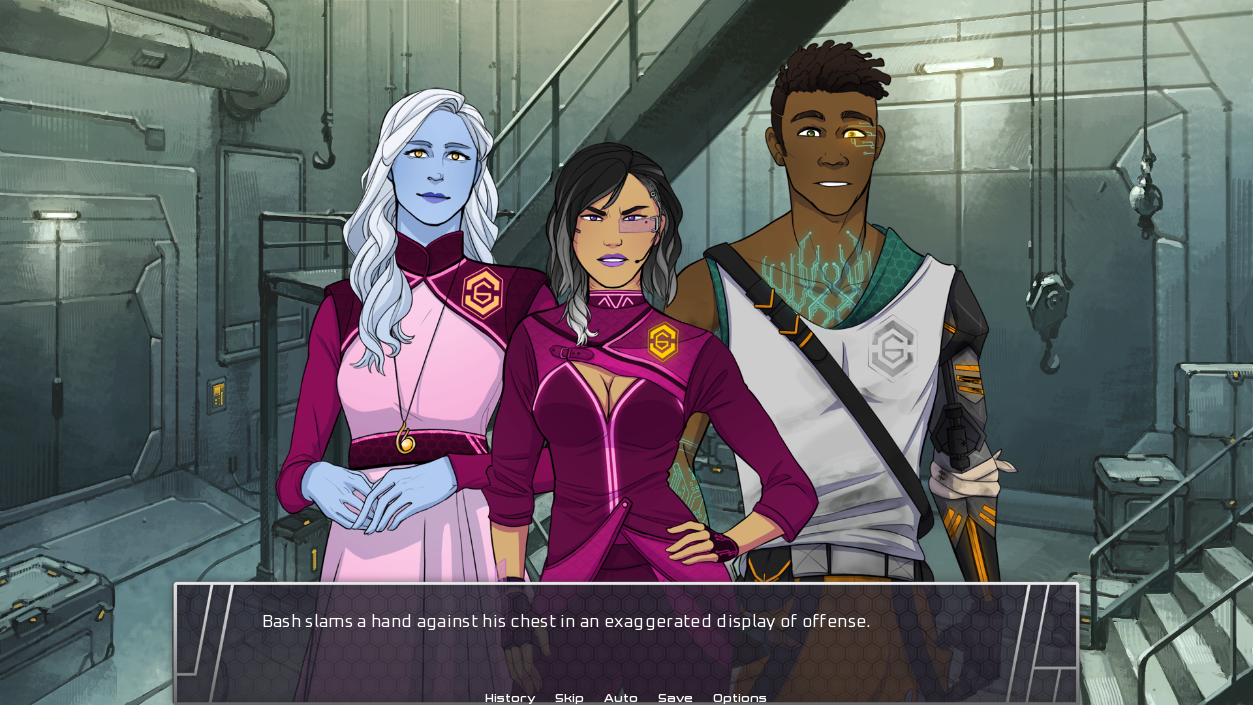 So I have a question regarding the end of Flynn's route. It seems a bit confusing but...


Does Flynn become the monster and go back in time? Because I'm pretty sure that small fox he was interacting with is a young Jenna

Thanks for the notice

Guess I really have to find it out myself, huh? :3