Sorry, I mostly use Discord privately right now (i.e. I'm not on any public servers).

Since last time I've learned a lot more about Javascript, and making web games in general, so actually making the new version doesn't seem as impossible as it did before. But if I do end up including all of the features I've mentioned it would be a massive increase in scope compared to what I normally make, on top of being made in a format I'm still not entirely used to. I'm very busy with lots of non game development stuff right now and so I don't really have time for a project that large.

Hopefully I'll get around to it at some point this year, though the other two problems from the last devlog still stand.

You mean these ones?

Not sure how the graphics for them would work in a browser but I would definitely try to include them in some way.

Have you disabled cookies? I'm getting the same problem but whitelisting https://v6p9d9t4.ssl.hwcdn.net (itch.io's storage site) makes it run fine. Other than that it might just be your browser, try updating it.

That looks pretty interesting too. If I ever get around to making this I'll give both of your suggestions a try.

Again, I'm not updating this version any more. I'll make sure you can if I ever do make the new version, though.

You're supposed to place the start and end points once your level is finished, which locks editing so that you can share your level. As you can see I didn't do a very good job of communicating this, but it's not a bug. I'm not updating this version any further, but in a new version that could use its own file format rather than TIC-80's .map files this wouldn't be a problem.

For now, you can still load maps made using the TIC-80 editor back into the normal editor (once the start and end points have been removed) and continue as normal.

Don't see why you'd need a windows version since it's a web game? If you want to play it offline you can either use the itch app, or download the cart and use TIC-80.

You need to put "end" after each line.

You're adding it in the wrong place; it should look like this: 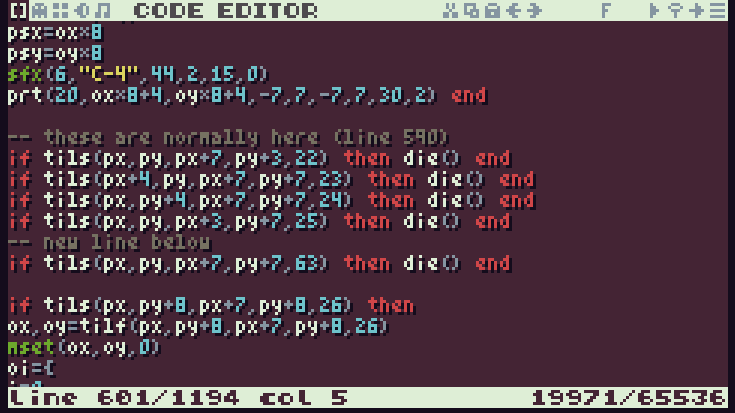 The code really isn't set up to easily make changes like that,  but it's possible.

The heart is not actually an animated tile but a sprite drawn at the level's end. TIC-80 does have support for animated tiles through writing special "remap" functions, but this game does not use one.

Making a specific colour deadly is possible but much more difficult than making a tile deadly, I'd stick with the method I described above.

If you're this interested in modding Celesteditor have you considered trying to make your own game? Making something like this isn't as complicated as it might seem using a tutorial like this one, and it would mean that you aren't restricted to building off of someone else's game.

Not sure what that could be. Did you forget to add the .tic on the end?

You can use "get cartcel.tic" to download the entire game, with any changes you made, then load it using TIC-80 (https://tic.computer/create).

Not as far as I'm aware. You could write code that applies a custom palette, then copy and paste it into the top of the code editor when you import the sprites.

I normally prefer frameworks to engines but that actually looks quite interesting, I'll check it out at some point.

The main problem with using Love2D is that it doesn't export to browser, and people willing to download software would probably rather download modding software or PICO-8 to make levels. This Love2D web builder does exist but I've never been able to get it to work. I would like to use Love2D but I would prefer it to be web based.

You'll need to upload the .map file somewhere first, like Dropbox or Google drive, then send a link here to that. You could also just make an itch.io page and put the file there for download.

That's a shame - good thing you took the video then.

You mean a devlog? It has to be attached to a project (in this case Celesteditor), so you'll need to make one first.

You can also make normal forum posts at https://itch.io/community

Nice tileset! Reminds me of the PICO-8 version with the background walls. Also good to see that you changed the winged strawberry room to something actually possible. My main problem is that the icicles look like they should be hazards, maybe make them darker to show they're in the background (also it looks like you used the hair palette index for the checkpoint flags, there should be another red that doesn't change).

Do you have the .map file for this version of the example level?

Just typed up this devlog if you're interested in what I might do with this game. As for working together with together, I normally work alone on projects (and have improved significantly at pixel art since I made this). However, given that this is a fan game and not really original, it would be nice to include other people who are fans of Celeste in its development, and I'll definitely consider your suggestion.

Yeah it did, with the door just before that one. I had to start a new save, though I got through the game much faster this time. Not sure how you'd fix this, but one solution might be to have the battery vines respawn, then removing the old battery if you take one. 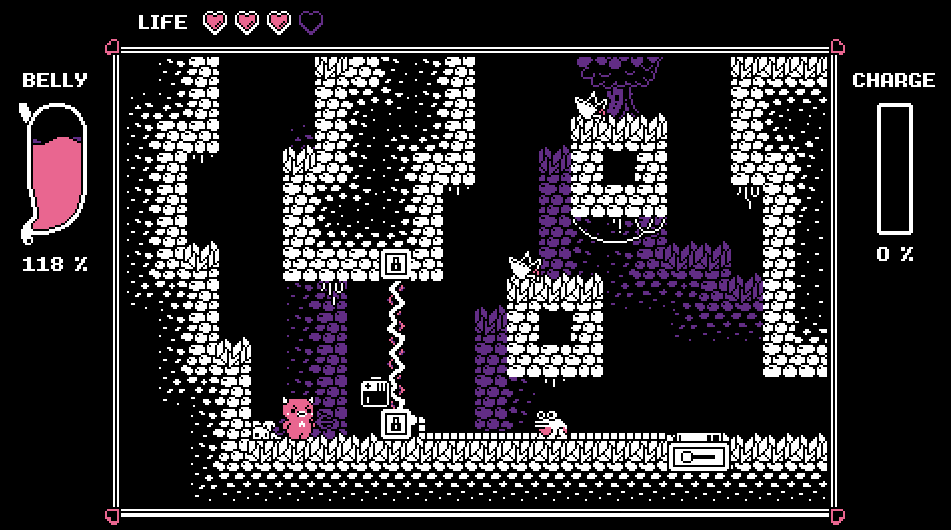 I pushed the battery through the door, then used the frog to get across.

Glad you got the game working! Controls can be changed by pressing escape and clicking "gamepad config". It's unlikely that I will go back to update this any time soon as it's over a year old, but if I do I will keep your suggestions in mind.

Nice game, but it's ridiculously easy to accidentally softlock it with the electricity doors.
(also because of keyboard ghosting it's impossible for me to toggle debug mode)

What browser/OS are you using? That might have something to do with it.

As I've said before, if I was going to update this I would just rebuild the game from scratch, hopefully with none of these problems. However, the music bug is a bug in the engine I'm using, so I can't fix it.

I'm glad you care about my game Aquatix, but given that it's almost 2 years old now I don't think I will be going back to update it.

This would technically be possible within the lmitations of the engine I'm using, but:

1 - The entire space for the level is already taken up. This could be worked around using compression, but saving custom tiles would still be difficult.

2 - Creating a tile isn't as simple as it seems, 16 different variations would be needed to be made in order to adapt to any placement (which, again, would take up a lot of space in the level file).

3 - I feel like being able to create your own tiles makes it feel less like a Celeste editor, and more of just a platformer engine.

I would like to add more than just the default ice tiles though.

I wouldn't say that platformers are "meant to be hard" but Celeste does seem to be. And yeah, the demo level has some pretty bad screens.

If I ever go back to update this it's likely I'll just rebuild it from scratch due to the amount of bad/old code in the game. The main reason for the lack of features in the game right now is the way the editor and saving system works, which I would also have to update.

Maybe I'll get around to that one day, and if I do most of these wouldn't be hard to implement. Also, what do you mean by "custom terrain"?

Nice level! Cool to see someone actually making something with this.

Got this on my first try: 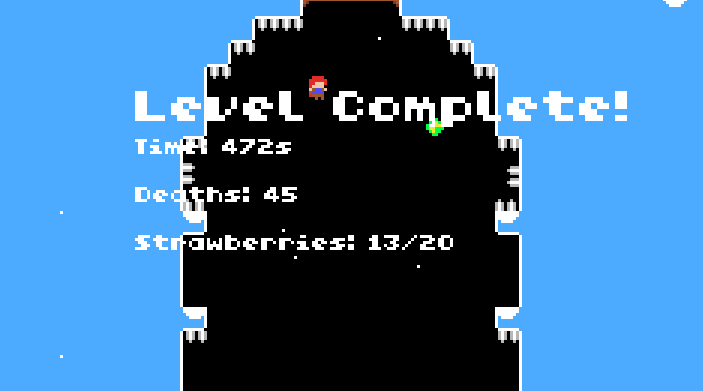 My one suggestion would be to think about the paths a new player will take through the level: Celeste normally has one main path through the level with optional strawberry rooms as dead ends, making it easier to find where you're going.


...when asking for a new balloon while holding one.

I don't think I even knew the TIC-80 website existed when I made this. If I ever make any other TIC-80 games I'll be sure to put them on there. And yeah, all my games are way too hard (I can barely even beat the demo level now).