Would it be possible to include a game recording function?

Sometimes I get carried away developing power systems, or an overly complicated system of redunduncies and I don't notice that the attackers and wiped out my front line, and the second line, and are now walking thru my base.

It would be nice if the game was being recorded so I could watch a replay of what happened, to analyse it, and learn from it.

A screen recorder wouldn't help since the screen was focused on the periferals, not the battle. 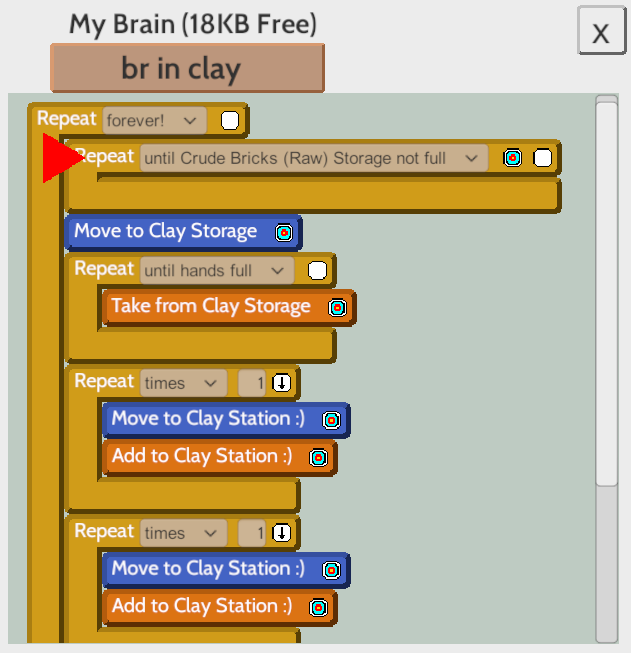 The first time it happened, my code looked very similar to yours with the question mark. I got around it by making him wait for 2 seconds before looking for a beacon, that stopped him from finding the forest beacon before the new one was completed.

Another minor issue that's a bit curious, if you tell a bot to pick up a beacon, he picks up the one you used to instruct him with.

Here's the long story: I instructed the bot called "bot-beacon" to repeatedly make beacons and put them in a storage box. But instead of picking up the unnamed one he just made, he picked up the one from my forest. So I came up with this solution: I made a beacon called "local" and put it next to the assembler factory, and reduced the range down significantly so that he would only ever find the new one he just made, and not one in the forest, except he picked up "local" and put it in the storage box, leaving the brand new unnamed beacon still on the ground.

So.. you could fix it by excluding that beacon from the range, but then if you did actually want to pick up "local" you'd need another beacon to guide to "local". My brain is starting to hurt thinking of all the possibilities. Has anyone else come up with this scenario?

Yes, I suspect you are right about the save file being corrupted, probably while trying to save to a disk with not enough space on it. I just started a new game and that solved them problem.

I looked up the log file, and it has about 45 lines of generic looking messages involving buffers and files, then these two lines:

Now that I know where it is, I can delete is easily when I need to, thanks :-)
Reply
Autonauts community · Posted in Feedback, Bugs 'n' Stuff
dddontshoot1 year ago

While I was trying to train a basic bot, another bot picked him up and deposited him into the storage shed, now the red program recording window is unresponsive, also, I can't get to the game menu, so I can't save or load or exit, lol.

So, I checked my save files, they're only 750kb, and my resources are fairly well balanced, so I don't think we have the same issue. The entire program folder is only 200mb, I can't figure out where all the space went. I'm assuming its a swap file in a temporary folder somewhere. I cleared 15gb so it had plenty of room, and it swallowed all that up as well, lol. I keep a usb drive handy, that seems like the quickest easiest solution, lol.

Have you managed to get berries to work? I've only tried a couple of times, but after a short while (it might be triggered by restoring from a saved game) the berries become useless, you can't pick them up off the ground or take them out of the storage container, or even feed them to the folk, they just refuse to do anything except, one time a bot was holding one and trying to store it into a container, so I took it off him, and I was able to plant it. But it grew into a useless bush, that refused to be thrashed.

Berries seem to be the only renewable food. There's not enough cows to feed everyone on milk, and bread requires sticks aren't renewable for some reason.

Hi, this is an awesome game. I love that I programmed two bots to wind up all the others. And one bot that can build more bots. I wonder if there is a way to program a bot to deliver a shovel to a bot with a broken one.

I only have one minor glitch to report, Sometimes I try and save a game, but it fails because the disk is full. I have to delete some files so I can save the game. Then when I close the game, I have 1.5gb of free space again. I'm going to copy some rubbish files that do nothing but take up space, so I don't have to hunt around for something to delete. I wonder how much free space I need prevent this from happening.

The light switch ghost was genious 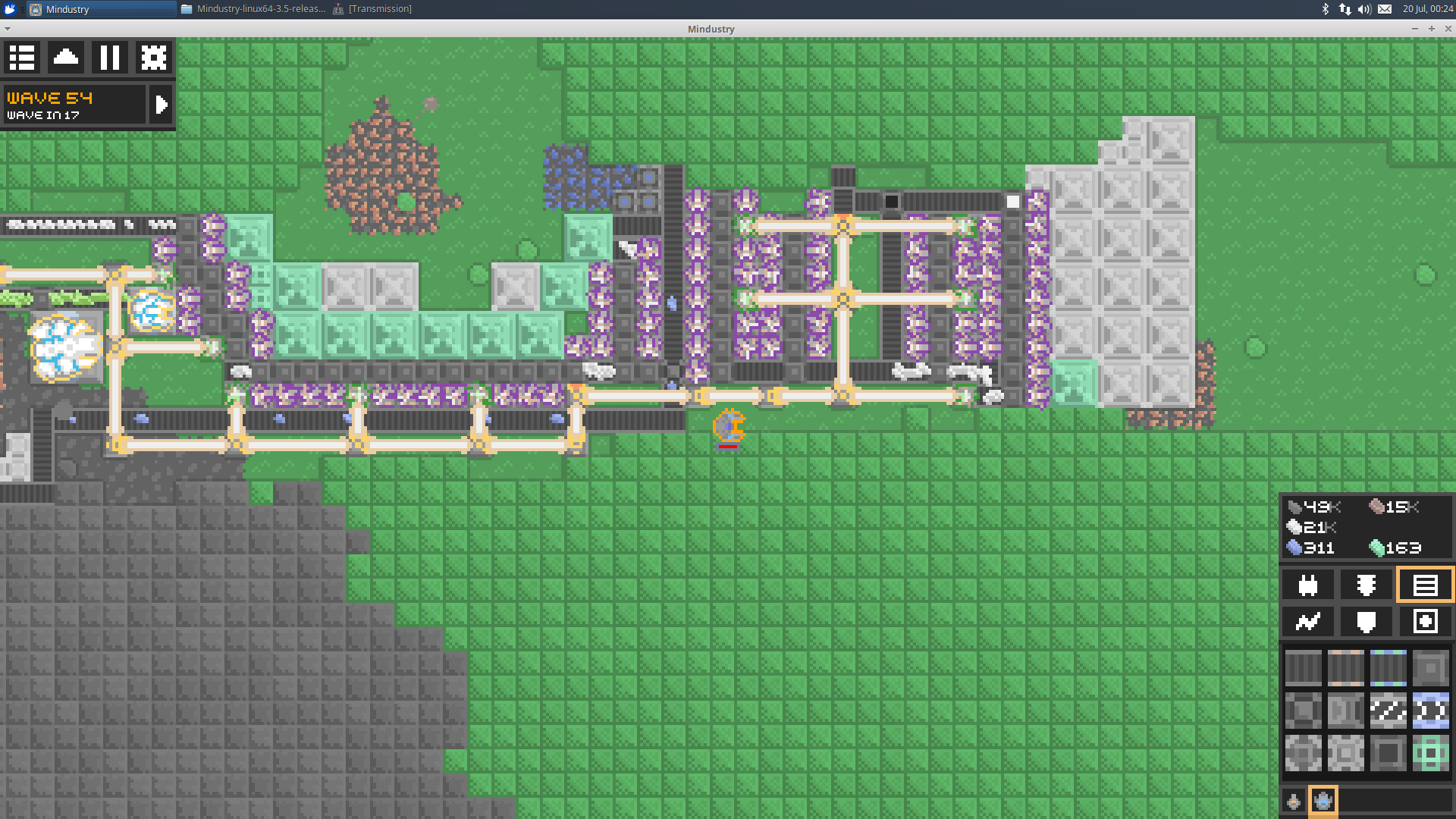 How do I run in Linux? Is nacl_helper_bootstrap involved somehow?

Oh, nevermind, he wasn't actually flat, just had low battery. I gave him some more work to use up the rest of the battery, then he recharged fine :-)

I'm stuck on this as well. If I left click, I pick up the bot, right click to put him down again. If he is already on the ground, right click does nothing. I'm using linux.

Cool, middle clicking, I'll try that. I just downloaded for linux. - the game is waaaay better, very refined and professional :-) I'm glad you made an online version 'tho I never would have bothered to download it otherwise. Playing online is super simple.

I like how you've gone from bridges to tunnels, I like to build several defensive walls each one supplied by materials from the one behind it, and the tunnels stop invaders walking past them :-)  I miss playing on random generated levels, I tried using the map editor briefly, but you can only generate random land masses, not resources.

I played the spiral and got to level 98 on my second attempt :-) which is cool, because I was still learning how to use repairbots and thermal generator.

After that I played the maze and there was almost no titanium, there was one patch, but it was right next to the invader spawn so I could only build 3 mines. I guarded it as much as I could with steel, then refined all the titanium to dirium and slowly replaced the steel wall with dirium and covered the area with repairbots, it was so awesome I took a screenshot of it.

What I said about invaders trying to walk on water and causing a crash. Well, that's exactly what happens.

Hi, I've been playing you game for a few hours now. It's really interesting playing without instructions, it involves a lot of experimentation and trial and error trying to figure out how all the different factories handle materials. two major pieces of feedback 1) trying to walk on water results in a crash. I suspect that if an invader attempts to walk on water also results in a crash, but I've never seen it on the screen. 2) If you run out of resources while building, then you get stuck waiting for that resource. Can't go away and build something else, or mine stuff manually, or even shoot at the enemy. It is especialy bad it you've exhausted your supply of Carbine because the helper robot that fly's around picking up Rock and Tungston will never resolve your supply issue. Other than that, it's an awesome game and totally absorbing if you have the patients. I had to do a lot of experimentation on Normal Level before I figured out you can load the guns with raw materials. I haven't figured out how liquids work yet. Then I started playing on hard and it always crashes when the game gets very complex. I haven't been able to figure out exactly why. Also, one time I walked right up to the edge of the map and the game crashed when the wave countdown hit zero. oh yeah, I've been playing online in Firefox Browser. Cheers