Cool. I'll probably play it tonight. My amount of work hours available has really dropped since all this coronavirus stuff, so I'm not making much money but I least I have more free time to play my games. So there's always an upside somewhere. lol

Thanks for the long, in depth response. lol

It puts me at ease to know that many things either aren't implimented yet or can be explained. I felt like I was playing blind. The tutorial or F1 doesn't seem to explain everything, (or else I'm missing it) so I felt as was "playing blind," as it were. I guess a lot of it is just me needing to wait until more things are added/tweaked.

I don't mind an "it's broken and we know" answer, since now I know that you know about the broken parts.

It's just funny because while playing all but one game I stream, I generally keep the streams curse free (contrary to what my name would imply, I suppose) but I'll be damned if I wasn't raging on EFA everytime I've been on it. lol Now I can settle down.

Sorry to hear about your job. Hopefully it's just a coronavirus related thing and you'll get it back once all this craziness is over.

Ok, so I've been playing/streaming this a lot more lately and I have a few questions for things that I just can't figure out.

How do you identify the unidentified module you have get at the beginning of the game?

Is there a way to "rest" like in many roguelikes? A way to heal without finding one of the hard to come by, red stims?

Is there (or will there be) a way to compare things without picking them up? As it stands now, my inventory will be full and I'll have to drop something to pick up the thing in a chest to compare it, then drop ans pick up things again, so that's kind of annoying.

Do the stats only do what the box says, (i.e. increase inventory, give you higher max HP, etc) or do they also do other things. Meaning if you put  point into STR does it make you do more melee damage or just give an inventory slot? Does VIT make you take less damage or just increase your max HP?  I mean, putting points into VIT is kind of pointless if it doesn't buff your damage resistance. Red stims are so rare in this game that just an increase of max HP that you can't fill is worthless.

What do the three shapes in the armor specs represent? The top, the middle "play button" looking one and the barrel looking symbol at the bottom? I've no idea what each one means.

Do you absolutely HAVE to destroy things to get drops? Like the chests, ammo boxes, medical stations, etc. Or is there a command to just loot them? Some chests open when you walk onto them, and it seems like everything else you have to destroy.

Sometimes there is a =|1 symbol (like an equals sign with a line through it) that appears  just left of the character section of the game on the right. What does it mean or represent?

This last thing isn't so much a question as a criticism. As much as I like this game, it is very frustrating. Just not in the way a roguelike should be. I'm a little unsure what the reasoning behind the points pool system you're using is? There are many times that I'll walk into say, the first room, and there will be five or six enemies there that spot me. With a normal roguelike "one turn for each player/enemy" system, you'd have a chance to wind your way around and keep some distance. With this system, it's horrible. Running away is often not a viable option with the way the system is designed. Combat starts and you take your turn, then you're stuck helpless as mobs come at you with multiple hits or surround you. Many times I've died in the first room you'll move into because I'm immediately spotted (especially with the low visual soldier class) and there's nothing to do. Everything seems to have more movements/attacks and backing up isn't an option given the fact that the beginning room only has the one way out. This is not an issue with only the first room, I'm just using it as an example because that is the most frustrating time it happens. I mean, the tilesets, sounds and overall ambiance to the game is top notch, but the way that points pool system is implemented is... not great. I mean, you seem to be going for an XCOM sorta thing here, but it doesn't seem to work particularly well in this context.

At any rate, sorry for all the questions and thanks in advance.

I tried to send this using "feedback" on the game menu but I'm not sure it worked so:

Found another bug. On the main menu if you click the "Mapgen seed" text so your cursor is there, then you click the "+" above it, you will get an immediate crash. telling you "Attemping to select while already selecting an object." Was able to reproduce everytime I tried.

Pretty cool. I like the voices and sound effects. All the cat pics at the end were a nice touch.

Reply
Escape from Aeon community · Posted in Any update on the next build?
CTRLhasESCaped98 days ago

No worries. Just doing what I can to help

Reply
Escape from Aeon community · Replied to Rauno Villberg in Any update on the next build?
CTRLhasESCaped99 days ago

So I sat down and streamed EoA tonight for a little over an hour. I had two crashes. First was a crash on death (floor four or five). Had to ALT+F4 out of it. Error was, "NullReferenceException: Object reference not set to an instance of an object." I tried to report it using the feedback form and got another crash when I tried to submit it. It's super long so I'll just post the image here.

Reply
Escape from Aeon community · Created a new topic Any update on the next build?
CTRLhasESCaped109 days ago

Was wondering if there's an ETA on the next build? I'm still getting constant errors on the game (similar to my other post) making the game all but unplayable. I was hoping to get an idea of how much longer it'll be before there will be a new build that hopefully fixes these issues.  Thanks.

Have tried playing a few more times since this post. Made sure my firewall wasn't blocking, (although I'm not sure why it needs a connection, unless you're using Unity analytics?) Have gotten the error everytime. Re-installed game and still got the error. The only thing that changes on the error are the numbers (Entity and ID).

Otherwise fun game. Can't wait to be able to play it more. 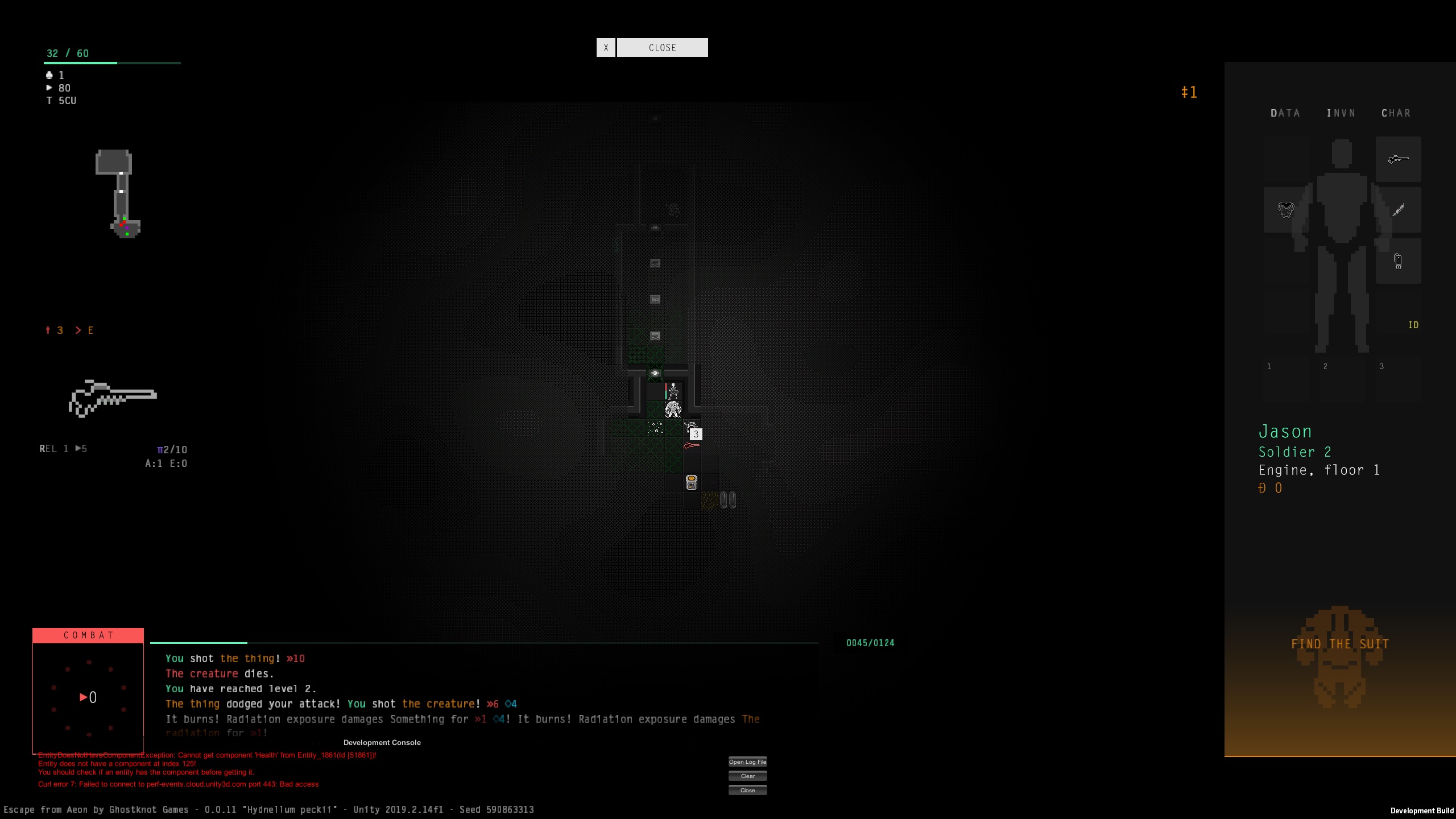 Hello, have gotten this same error twice. Got this, completely shut this and the itch.io app down, reopened it, restarted and got the same error with a slightly different number in the ( ) on the first line. I also have my log file but I doubt I should post it here because it's so long. I didn't see an email address or anywhere to send bug reports to, so I'm just posting it here. Thanks. By the way, the few times I played this about a week ago there was no issues or crashes. Not sure what could have changed.

Edit: Let me add the error text here. Doesn't seem like you can blow up the image.

EntityDoesNotHaveComponentException: Cannot get component 'Health' from Entity_1861(Id [51861])!
Entity does not have a component at index 125!
You should check if an entity has the component before getting it.

Cool. I was able to put about 30 mins into it. I'm sure you're aware, but the pathing is a bit weird. I can send a Pop into the middle of the ocean, then leave him there underwater. Then later I can walk him back on shore anywhere. It's like they don't understand not to go into deep water and treat it like any other piece of walkable land.

I don't know if I missed it, but do you have a Discord? That way everything could be centralized in one place. Chats, updates, bug threads, etc...

Hey there. Just bought your game a bit ago, and it crashes after about two mins. Have tried it three times and same crash, same error with same action. It happens after I "check out" the dock. Then, I go into research and select it (shipyard). After that, I click on a Pop, then click on the dock (hammer icon) to restore it. As soon as I click it I always get the error:

Then it crashes to desktop.

I know you just released it yesterday, so it's not a huge deal. But I wanted to let you know so you can fix it. I'm looking forward to playing more. Even though I haven't been able to get much into the game it seems pretty cool and right up my alley. Thanks

Hmmm... Norton is reporting the .exe file (expelled-rl-windows-20190420.exe) as a virus when I try and extract the .zip file. Any reason it would do that? I mean, I'd like to think it's a false positive, but at the same time I'd like to be sure before I allow it. It's being reported as a Trojan.Gen.9. Thanks