Songs of the Eons, 0.1.9 community » General discussion · Posted in Dynamic vs static territories
CrouchingLemur270 days ago

Maybe a system in which "settlements" are static, but "territories" are not?

There would be set locations for settlements (representing the "ideal" location for settlement in that area), but the territory they control can change. So when you colonize new land, you get a new territory with only 1 tile which holds the settlement.

As it builds up, the settlement starts exerting its influence over neighboring tiles and further. It could even control tiles, that under static territories would belong to another territory.

Tiles that would belong to another territory are behind gray line(could, or could not be shown during actual gameplay):

When it reaches next "settlement location", it creates new settlement under new territory(separated with thinner line):

There could be laws for that so player can decide whether he wishes for territory borders to have the same distance to both settlements, use "static" territory borders as reference or use the "first come, first serve" rule.

As a sidenote, I also wanted to ask: will movement be tile- or territory-based?

Reply
Songs of the Eons, 0.1.9 community » Future concepts and ideas · Created a new topic Suggestion for a technology (and not only) mechanics
CrouchingLemur1 year ago (1 edit)

Technology (and not only) mechanics suggestion
All names/values presented here are just suggestions and subject to change.

So, one of the ideas behind SotE is the eventual decay of empires so the new ones can rise. One of the requirements for such system to work would be such a technology system that will have a built-in "forgetting" mechanic. And this is what I'd like to suggest.
The system I am imagining would have every technology have 3 values about how well it's researched, as opposed to one present in most games (researched = yes/no). These would be:
1. Discovery
2. Understanding
3. Reachability

Discovery would be the first step in researching the tech, essentially just your people realising that there is such a thing. Discovery could be implemented two ways: 1) it could have a chance(affected by other values) to be discovered every certain unit of time in-game or 2) it would increase by some percent(affected by other values) every certain unit of in-game time and is Discovered at 100%. But only discovering a technology is not enough to be able to make use of it.

Discovery of it would depend on such things as how agrarian a society is. Once it's discovered, some of your people make them and start using them, but not very effectively - you have low understanding and low reachability. But the neighbours/relatives/whatever of people using plough see that it already boosts their output by a whooping 10% percent, and decide to start using them too(if it's not made impossible by for example lack of high quality wood necessary for making ploughs[if high quality wood is necessary for that, its just an example]) - your reachability is increasing. As more and more people are using ploughs, they share their experiences between themselves and figure out how to use ploughs more effectively - your understanding is increasing. All is good and you are getting close to getting a country-wide +40% total farming output bonus. But then the vermen attack. Most of the high quality wood is used to make weapons, leaving not enough to make ploughs to replace the ones broken over time or make new ones - your reachability is stalling or even decreasing. As your farmers are dying on battlefields, so is their knowledge on how to use ploughs effectively - your understanding is decreasing. Once you understanding and/or reachability is low enough, you risk forgetting a technology - un-discovering it. Another one or two hard wars with vermen and your farmers will abandon using ploughs. Being able to swing a sword will be more important for them.

All of the above changes could be made faster or slower depending on variety of things.

If your society is communal and/or lives in densely populated areas technology will reach more people faster, and vice versa - a solitary farmer in sparsely populated region won't go on a 5-day trip to his 4th cousin just to show him a new stick he has.
If your species is long living, every individual can have quite a lot of time to familiarize himself with new things and pass on the knowledge he acquired. But on the other hand, conservative societies will look at new tools with distrust, and will prefer to stick to their traditions. An 150-year old Elven lord migh prohibit all people in his demesne from using "devilish stick of corruption", and few generations may need to come and go before its truly embraced as an useful too.
If you have enough high quality wood, or enough weapons in stockpiles, preparing for war will not necesarilly affect reachability of ploughs in your realm.
And if your society has developed a tradition for writing things down, you will not necessarily lose the knowledge of how to use ploughs effectively if 70% of your farmers die, as that knowledge would already be written down.

That I think sums up how such a technology system could work. But in the beginning I mentioned that maybe it's not only for technologies...
I think something like that could be implemented in many different aspects of a society.

This could be used for something like traditions, maybe with slightly altered names and maybe no discovery.
For example a "Warmongering" tradition could determine how much... warmongering your nation is. Without discovery, understanding would be renamed to "Strength", determining how big of an impact it has, and reachability to "Commonness", telling how many people are affected by this tradition. And if we stick to warmongering, it's effect scaling with "Strength" could be up to +20% damage and as a negative as low -10% defence at 100% strength. This could also implement bonuses at certain tresholds, for example at 60% strength you are able to recruit berserker units.
Another thing this system I think could be used for, is adaptation to certain environments. Again, just rename "Understanding" to something like "Adaptation" and "Reachability" to something like... I think "Commonness" once again is the best fit, and make it determine how well your people manage in different environments.
As an example, "Mountain Life Adaptation".
Scaling with adaptation, you could get movement speed improvements, better mining output etc. At certain tresholds you could get bonuses like ability to make homes inside the mountain. 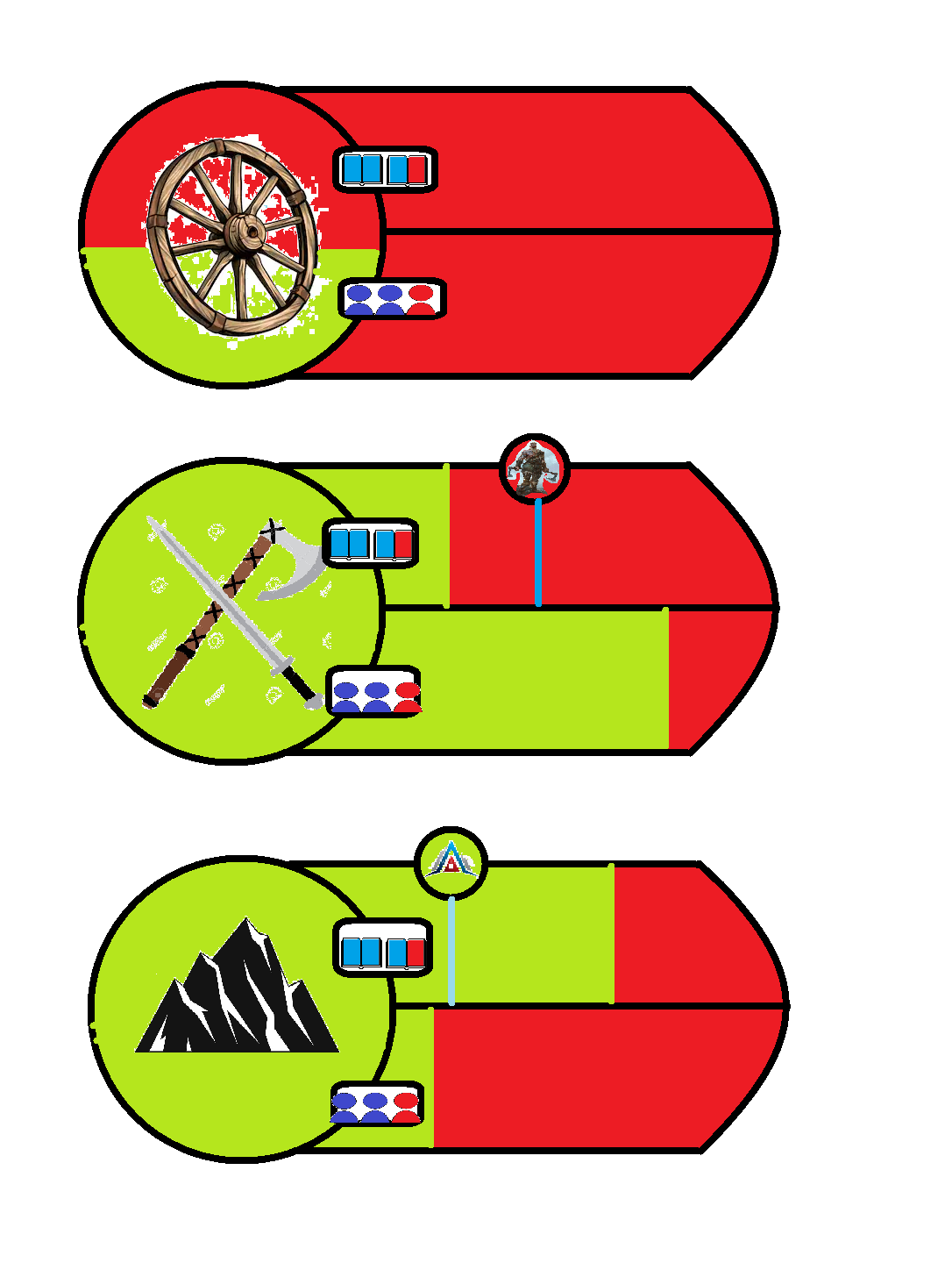 Big circle with icon inside it represents discovery. Upper bar represents Undestanding(books) and lower bar represents reachability(people).
Wheel is about halfway towards being discovered.
Warmongering is discovered, its at around 30% strength - at around 50% there's berserk unit unlock but that society/country is not there yet. Commonness is very high though, meaning a lot of people are warmongering, its just not very strong in them.
Mountain adaptation is high, and homes inside mountains are long discovered. Commonnes is not very high though, so not a lot of people will be able to make use of that.