7dfps 2020 community · Posted in Regarding the rules
crabmusket70 days ago

What's everyone planning to use? :D

The last game jam I did (in 2017!) I tried learning OpenGL from the ground up with low-level bindings in Go. That was... not good for productivity. But I did learn a ton. This time around I'm going to stick to what I know: THREE.js for rendering. I'm going to use Mozilla's Ecsy for behaviour, which I haven't tried before.

This really reminds me of SkyRoads! I love it :D

Did anybody else spot the gorilla? ;)

I made it open source because 1) I currently don't pay for Github and 2) I'm considering turning the codebase into a learning resource after the jam.

Reply
#LOWREZJAM 2017 community » General Chat · Replied to sirpalee in What language / engine / etc are you using?
crabmusket3 years ago

Cheers! I'm looking forward to delivering! If nothing else I've certainly learned a ton and become much more grateful for game engines :p

Reply
#LOWREZJAM 2017 community » General Chat · Replied to sirpalee in What language / engine / etc are you using?
crabmusket3 years ago

What's the state of audio in Rust? I'm having trouble finding a Go library that will do audio in a way that seems reliably cross-platform. I looked at doing the jam in Rust but I figured the learning curve was going to be way too steep!

Just posted update number two! It's a bit disappointing but my resolve is strong! Going to find ways to work smarter and increase my output.

Nice work! I'd fade that second row of stalactites a bit so they don't look like part of the top layer though!

That first shot is kind of fascinating - is it meant to be that fast? I like the rapid jittery style.

Beautiful! How do you come up with your colour palette?

Nice, another 3D entry :). I feel mine might end up being similar in terms of walking around and inspecting objects. Looking forward to more updates!

This looks pretty cute. I've had a soft spot for management games where you specify tasks and then they figure out how to do them ever since playing Lego Rock Raiders on our first PC. Looking forward to seeing your progress :)

Man that reminds me I need to get to the zoo at some point. Apparently Taronga is really good but I've never been.

Oh, and the game looks cool ;)

The style is great. I'm getting flashbacks to my days of Oracle of Seasons on the GBA!

Check out the project on Github!

Let there be lighting! 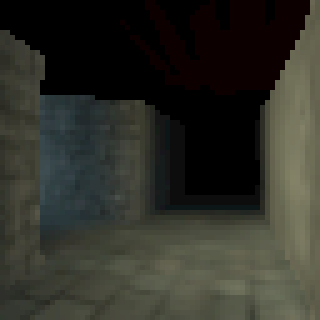 I got my asset issues sorted out the other day and re-unwrapped my whole little level. It took about 10 minutes instead of 3 hours! That's more like it. Yesterday I hacked in some lighting calculations based on this great tutorial, and it's starting to look much better. Now I need to start thinking about actual gameplay!

I also realised that my last two screenshots were almost entirely black on certain monitors. Using OpenGL's SRGBA texture format seems to have improved that a great deal - as has adding lights, since the scenes were supposed to be fairly dark anyway.

I hoped I would have more to show off by now. I had little time to work over the last few days, but I wrote some basic camera movement so I could examine my environment in-game, and added fog to my basic geometry shader. 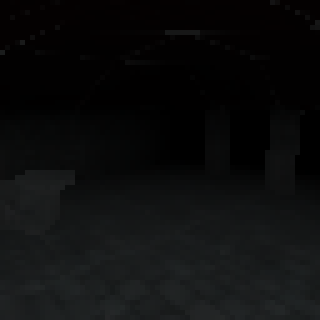 The first room in the game, complete with texture artefacts because of my unwrapping

Today I spent 3(!) hours creating a basic space to play around in. Most of that time was spent unwrapping the level onto my texture atlas. It's completely unscalable - I will hardly be able to finish one floor at this rate, let alone my planned 5. It's frustrating because I have a ton of cool ideas for content, and I need to move on to gameplay - but the environment is taking so long.

I think I need to write some code to split up my exported OBJ file by material, so I can rely more on UV wrapping instead of assigning each group of quads manually. Ditching the single-texture atlas (which I did because it's easier) would also improve the mip mapping. 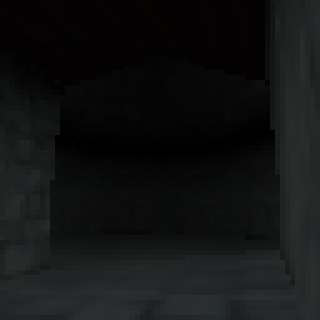 A little further down the corridor

At this point my priorities are:

It is Day Three and I have finally managed to render a wobbly corridor in OpenGL! 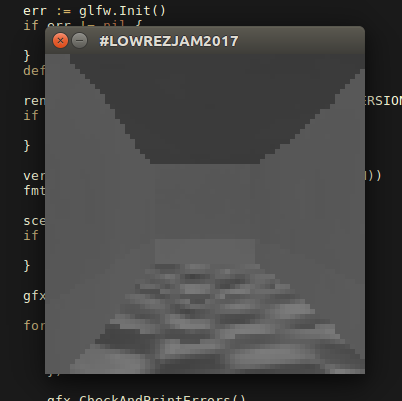 According to Toggl, it's taken me 6.5 hours to get this far. Hopefully the next 6 hours will be focusing on productive stuff, not wrangling OBJ files and framebuffers!

I decided that for this jam I wanted to learn how to use raw OpenGL. It's been eye-opening so far, but the feeling of control is pretty awesome. I wanted a language that was low-level but modern, so Go seemed like a good idea. Its go-gl bindings have been great; I can basically translate C/C++ OpenGL tutorials straight into my app with only minor edits.

CASTLEROOK will be an atmospheric walking simulator that may include gameplay, if I have enough time! I'm going for a dark-fantasy dungeon-world sort of vibe, but hopefully with a few surprises. My main inspirations are Arx Fatalis and Thief, and also the 3 hours I played of E.Y.E.: Divine Cybermancy. Killer pedigree, I know.

Looking again at the render above, the tiled floor now reminds me of this iconic shot from Stalker. Hmm...

I'm also interested in this topic! I don't have any wisdom to share but if I gain some I'll report back ;)

Love it already! I sense that good concise copy is going to be important for this one.

Getting my hands dirty with low-level OpenGL in Go :D

Fantastic! Visuals and sounds were perfect, and the exploration gameplay is a lot of fun.

I love the environment. The controls take a bit of getting used to, but I could see them being really great with a little practise. They just felt a little dull to me - I was tweaking the sticks to their extremes to get what felt like too little turning. But it's a great start at something very unique!

Difficult, but great stuff. Sound and graphics are just perfect.