way too excited for this

I woke up to see this. Thank you for brightening my day.

Anybody else still waiting? It's gonna be March in about an hour in Korea lmao

!! I half screeched I'm in Korea too

Everybody is talking about staying up till nighttime and here I am chilling at 3:40 pm

Since we're all patiently waiting for ep 5... Tell me about your Traveler(s)!

I have three MCs: Stella, a blue skinned female Tilaari with purple hair, Estelle, a short non-binary Kit with an energetic personality, and Asteria, a human princess with long red hair.

Vexx and June probably, I feel like June's route would be.. very interesting

If you go through A6's official tumblr page, they mentioned that they didn't have a set time.

IT'S COMING OUT SOON Y'ALL

Wishing you guys the best of luck! I really hope this game gets enough funding. A battle royale themed visual novel is such a fresh idea.

WTNC was my first ever computer visual novel and it changed me a lot. I'm so glad you guys were able to come this far and get the spotlight you deserve. Keep on the fantastic work y'all

FINALLY MY TIME HAS COME

I feel you but calm down there lmaooo

You are queer, you are legit.

Even if you aren't queer, you are legit.

But if you don't support queer, I'll have to think about it.

DON'T FORGET TO PET THE DOG Y'ALL

JUST FINISHED AND CAN'T BELIEVE IT

I'M GOING TO BE LIKE THIS UNTIL THE SEQUEL COMES OUT

(also as a Korean I very much appreciate making Min a Korean-American :DD)

Short, cute, and realistic (the masks part at least)

Monthly updates! New updates are always nice, plus it might just motivate you to work harder. You've said that this November was very 2020 for you- I hope you and your loved ones are fine and safe, and take your time- being optimistic about early 2021 release is making me hopeful too. And potential romance routes in Chapter 2!!! Can't wait to date the love interests :3

Ooh so Bo and Ben were misgendering Vinny! Showing people making mistakes on  transitioning  is nice to see, it is a purely natural thing that doesn't show in visual novels often. Best of luck with the bugs and thanks for the reply :)

Aaahh!! I honestly can't wait for the full version and I also can't believe that nobody commented on this game

Before I talk about the storyline- the bugs. I went with female+she/her Bo, male+he/him Kai, female+they/their Alex, and male+she/her (basically, transgender) Shay. First of all, in the Image Gallery, Shay shows as a female. Second bug- in the Replay Room Extra Scenes, Shay's sprite is female (with she/her pronouns) and sometimes Shay shows as "Beautiful Stranger", Alex as "Federation Officer", and Kai as "Angry Nerd". Third error- I don't know if this is a typo or intended- when Shay, Bo and Ben talks about Vinny,  Bo says "Haven't heard from him in years though." and Shay says "She does go by a different name... she's still an idiot." Is Vinny genderfluid? (I'm not sure whether this is how genderfluid works but..)

Now on the gameplay. Pretty decent, personally I would love to see more action but I'm not complaining about the current one. Overall everything seems smooth, I'm curious how this game will take shape once it's fully developed. I took every path I could so far and I can tell you for sure that Kai giving Bo a plant is so cute agahgfdhjs

Long story short- wow this comment became much longer than I expected it to be- keep on the amazing work, as a supporter and a part of the lgbtq+ I want to thank you for trying and doing representation of various genders and sexes by making it customizable (and for the Developer's Note, really moved my heart), and good luck with everything. Stay safe!

Felt like small happiness dabbed here and there. Cute and heartwarming, but I couldn't go back home to unbottle the memory and enjoy it full.

Finally, my days of checking andromeda six's itch.io page every day paid off.. Can't wait for the next episode, I found out this game two weeks ago and this is one of the very few visual novels that is in a high quality in pretty much every area- I'll be patiently waiting for Episode 5, man I can't wait till Stella (Traveler) will have to comfort June with his mental breakdown..

asghdag THE TWIST WAS PERFECT!! Lana's "Holy fu-" was exactly what I was thinking lmaoo.  I also liked the mini games- made me feel like I was actually Elliot/Lana baking. Overall the story was cute and fun to play,  and fact that Lana learns to get over rejection was a nice, fresh bonus.

I'm looking forward the modern au version being made for this year's yuri jam >:3

Can't wait till episode 5 comes out, this will be the only thing on my mind for a while :3

This game gave me chills! I expected it to be a sweet visual novel but it was much darker than I thought.. Wish we could know more in detail about what exactly happened, but I also think the game's mysterious aura could be made because it was vague. Keep up the good work, I really liked it!

Oh man I loved this game!! Aimee and Celena are both so cute~ I think it was nice to see a visual novel dealing with relationship problems, we don't  have a lot of them. Also one of my favorite parts was when Aimee had preferences. By that, I mean that Aimee will react positively to some food even though you totally messed it up but some food she'll hate though it is made well because it just isn't her type. I believe this made the game much realistic.  Oh also- just like a comment a bit down below mentioned, I think it would be better if the choose-the-ingredients part had a visual way for the player to know it. So we can un-select ingredients and there are some people like me who play games with all music& sound muted, yknow? Anyway, it was a really cute vn, I hope to see more of these from you!

The story is so cute and sweet! I loved the art style (for both the background and character sprites). I would definitely love to see a continuation of this universe/content, and I wish we could know more about other characters' family/personal lives like we could with Xin :3 Anyway, great game :)

Ooh also, error report- Harriet's name should be ??? before Nell gets "officially" introduced to her in class, but it shows as Harriet when Nell talks to her in the halls. (There was one scene like this, if you need a screenshot I'll try to take one)

Ah, the game jam had a restriction of 1,000 words huh? Didn't know that, thanks for telling me. If that is the case I bet you guys will be able to make longer, better and deep visual novels well! I'll be looking forward more of your works ~ Keep up the good work, y'all have my support!

So freaking cute...Everything was so adorable and melted my heart... DM is my fav but I want the President as a teddy bear

Really short, but nice. More content would've definitely made it better, but I'll let you pass because I love Cilantro

one of my fav halloween games!! art and writing both so cute and amazing dawwww.. Take the cuteness warning seriously. I'll recommend going for Jam's ending last, it's so freaking adorable that other endings may look a biiiiit less appealing even tho they're great too.

Aah sorry to interrupt you guys but I think I found a bug.. JB's icon doesn't pop up suddenly. The game works but I can't see her icon. Like this: 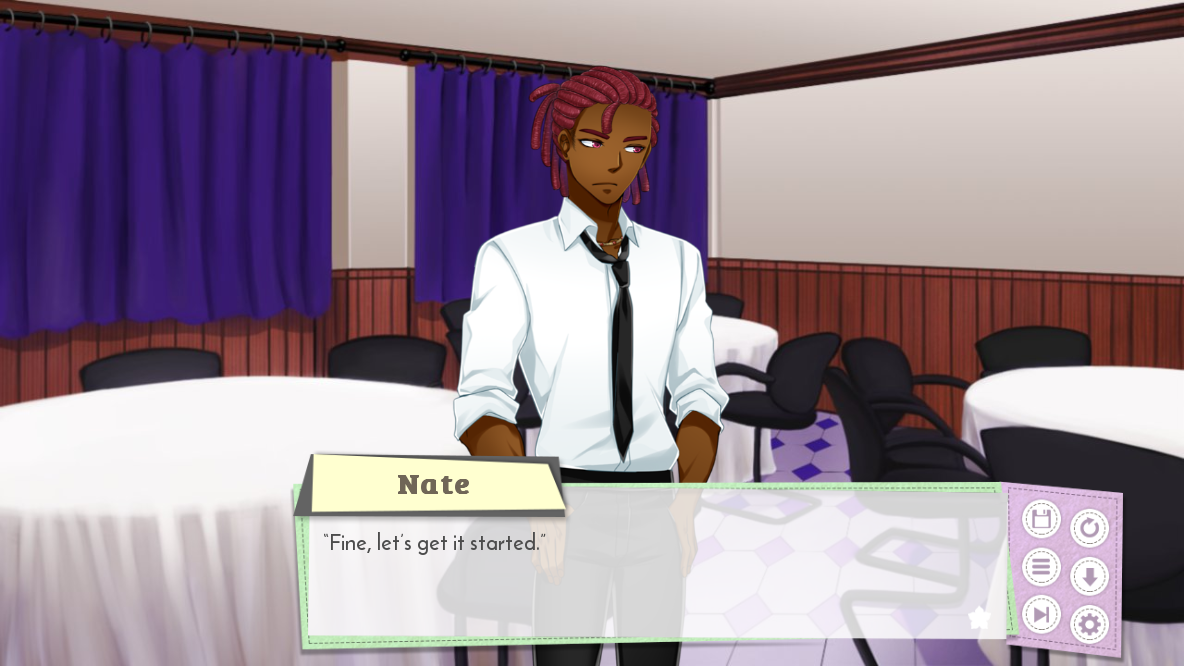 Long story short? AWESOME GAME. I never expected myself to like this game this much oh god... And here I am after finishing Nate's route.

At first I didn't like the game that much bc JB felt like such a jerk and interested in boys 100/7... But oh boy you grow to adore her. She's so fun and humorous, always knows how to lighten the mood. And the random moments with jb and her bf is so cute

The game system is pretty cool too! At first I was pretty overwhelmed because it seemed like there were too many but you get used to it and it's pretty cool! Same applies to the random events/choice over which clique reputation to gain n lose which happen once a day- it makes the game more realistic.

If I have to give criticism hmm... I'm not sure if this is because I played the free version but I think we can definitely use some more random events. To me they seemed too rare, but it's just my personal opinion. And maybe this is because I lacked affection for other characters but I would (again, personally) prefer everybody from the club bonding a bit more and having a nice fluff scene at the end.

But seriously, overall, this is amazing! Thanks for blessing my life (and others) with this. Soundless support to yall until the day comes when I can buy games online :)

OMG i love this game!! I only played Soh's route and Isven's route (currently playing Lemos and damn I just love him lmao) but I had to leave a comment.. Not gonna lie, this is one of the best visual novels I have played squeee!! The art is just so realistic and cute, I love the face expressions and the mer- I mean seafolk clothing.

And like all of the comments said, NOVA IS MY GIRL!! Her sarcasm? Personality? Looks? There aren't a lot of visual novel MCs that have such a stable and fun personality like Nova. Great job on her character! This also goes to other characters- pretty much everyone. They all have their unique self which I find really nice.

Keep on the great work! I can't buy the game because I'm only a student currently but the day I can use money on games, I am going to buy this. Now if you'll excuse me, I have a route to finish.

Came here years later to tell people who still hasn't played this game yet to give it a try. The characters has hidden depths and backstories that can be revealed in each LI's route. I loved exploring all of them and despite the lack of CGs, they are just beautiful (Of course, I'm talking about the happy ending CGs). And man, this game just makes you want to bring back 1920s slangs XD. So if you haven't tried this game out, WHAT ARE YOU WAITING FOR???