Wish I could pin comments lol. I mean, it's an actual cohesive review, I really appreciate it!

So yeah! Many of the bugs that can be used to your advantage are indeed totally unplanned, and in many cases discovered by other people than me. Naturally, I've chosen to leave them in, as they double as hidden cool mechanics and speedrun strats!

Mystery, exploration and getting lost are indeed important themes for me, so I'm quite cautious about adding any hand-holdy tutorials in the beginning, as it might change the tone - as you speculated. THEN AGAIN, I'd like to make this game accessible to as large audience as possible, so I should address it somehow.

Answer for the accessibility problem could be something I've long yearned to make: a game manual! That's the next thing I'm gonna do for EMUUROM: A Retrobiologist's Field Guide, a short journal that explains the UIs, basic mechanics, behaviour of some EMUUROM and tells the backstory of the protagonist. And if you want to go in blind, it would still be possible; you could just read the guide afterwards!

Btw, I finally embraced the puzzle aspect of the game and added it as a tag.

Thanks for the feedback, this is valuable data that makes EMUUROM better still (and maybe more importantly, fills me with determination)!

What an exciting game! i finally beat the boss with the third weapon, it was quite tough! 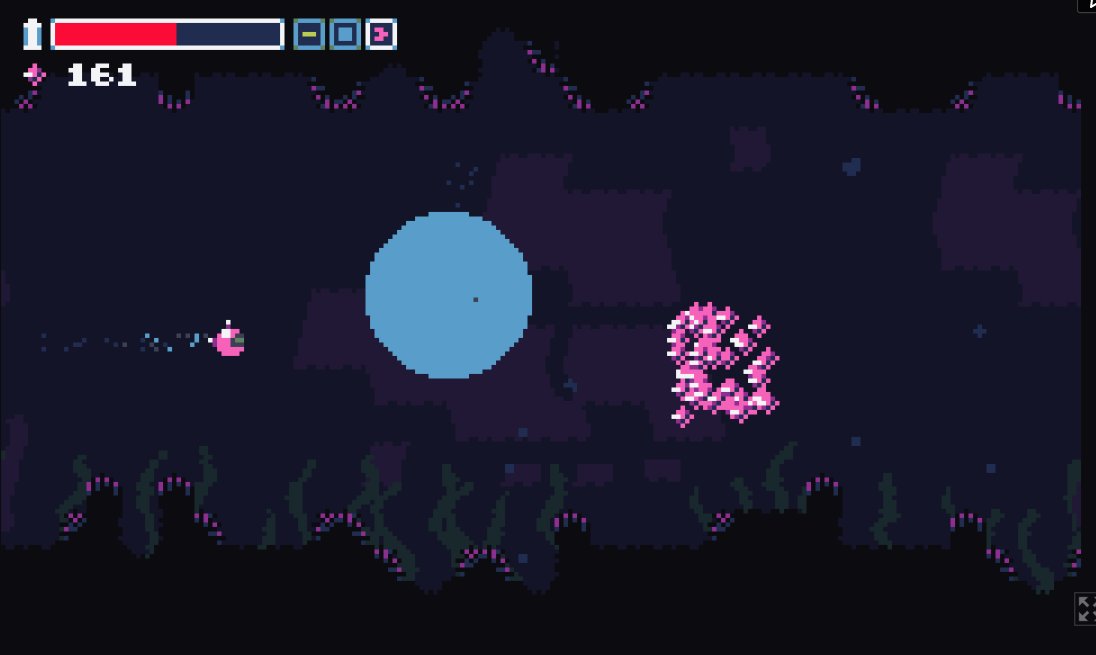 Graphics and music reminded me of Environmental Station Alpha, gameplay of Space Impact. The level had a nice ebb and flow difficulty curve, and the three weapons gave a reason to try again after dying.

This is surely a welcome addition to the fantasy console scene (and the first game I've seen made with a pre-release v0.80 of TIC-80!). I'd like to see a post-jam version of this one day!

The first bird room has been a source of frustration for some players, but I'm at odds with it atm - it seems to partly work because it in fact should teach that momentum is preserved when jumping from a moving platform. That being said,  it shouldn't do that through frustration, though! :D

And then, the scanner lines!

They are 8 lines (4 red, 4 yellow) that increase in length by 2 pixels every frame until they collide with something. The rotation angle phi_i of an individual ray i is calculated with

where phi_0 is the center direction (that the player can manipulate), phi_max is the half of the ray cone "width" angle and the sine term changes per time t and ray i.

So your guess wasn't that far from the truth!

Ah, the missing bird bug resurfaces. I've no idea atm why and how it happens. :D What I've gathered is that the bird should return after the player goes a few screens away and then comes back, but it's still a guessing game...

Oh, the vertical air shaft? I thought THAT was the hole next to Mt. Sus you were asking about earlier :D it's not important (yet).

hint: there is a hidden path nearby to get past the waterfall pit.

Also, nice to hear that the controls "clicked". I'm still pondering if I should tweak them a bit, but this reassures that platforming physics are at least 95% complete.

Thanks for your comments hygge! my paragraph-by-paragraph answer follows:

I've for a few years wanted to make a "biologist game". Then the idea collided with an already-existing post-jam platformer, and they fused into EMUUROM.

Snail shortcuts are tHE BEST. Also, there is a map screen, but its button is currently only told in one of the 'tombstones', or virstanpylyväät.

I'll consider adding more holes to the ground (through which the scanline is seen in the secret tunnels)! That might change the aesthetics of the tilesets considerably, tho, which means design work (note also: i am lazy)

Slipperiness of movement is mentioned enough times already for me to do something about it.

There will be a few emuuroms that are designed around pausing :)

The "future path" phasing is indeed just a visual thing

maybe I should add an easter egg to the endscreen as well...

:D Luckily, there is indeed more to be found in the demo, see my answer to your second message :>

2. It's possible to get into the other side.

I'd suggest you to try it again,
no one has made it yet.

Extremely addictive game mechanic! Creating a rectangle, shooting it and hitting a target is veeeeery satisfying, and sound design is playing a big role here. I suspect that after a longer session, a tetris effect would be apparent. :D I'd drop the jumping triangle, tho - having to tiptoe around it distracts from the main mechanic, especially at higher speeds where you just want the player to zen out

GREAT TO HEAR, THIS IS THE INTENDED EXPERIENCE (save for the abrupt ending,) MORE COMING SOON!!

haha, didn't even consider that interpretation! I moved the plant one tile right so it should be less ambiguous in the next update.

Ps. Nice to hear that you like the music! You can also listen to (an older version of) it on my soundcloud: :D https://soundcloud.com/oggborbis/sets/tic-80-chiptunes

Thanks for extensive feedback! ^^ Great to hear that level design does its job, as I'm not that experienced on the matter, hehe.

I'll try to smoothen out some of the trickier jump sections, especially those in the first bird room for the next release 0.1.e. And I guess I should also work on the tilemaps, too! Which tile was the one you thought was part of the background?

And yup, it's is tricky to deliver a steady 60fps on browser, and for optimization I can only do so much (but I'll try to work on that, too.)

thanks for the feedback! the only thing i'm regretting is the lack of music...

thanks for the feedback! what made it confusing in your opinion? (i'm all for making future builds more accessible!)

not really the jam page feature suggestion per se, but i'd like to be able to search jams by their name in the search box, not only games and creators! it's sometimes difficult to find an older jam from itch.io without resorting to google.

blown away by the scope of this game (pun intended, i guess)

The zip file is your best bet, but you'll also need the Love2D framework version 0.10.x! Yeah... not that simple, especially after Love2D version 11 came out. Maybe I should update this to work under version 11...

Anyway, unzip the file and run with command

I only now realized the .deb file needs also the love2D framework to be installed correctly, so I removed it altogether to avoid confusion. Apologies for the late reply and unclear instructions!

don't worry, next version has a reduced slipperiness of 75%

Haha, this is a recurring complain to my platformers! I tend to overshoot the... slippery-ness,  so I better tone it down for future releases. Thanks for the critique!

5/5 monster design & descriptions, also a great example of non-game content on itch.io. This was a huge inspiration to my own barcode scannerbestiary in GGJ!

aaaand linux build is up!

Thanks for the feedback - and especially for pointing out that bug! I had no idea about this (in earlier releases, there indeed was a penalty for extra taps... I better fix this immediately...)

Hmm... did you try opening the game again and recalibrating (tapping to the rhythm) in the beginning?

9 days later.... the audio sync issues should now be a thing of the past.

.love files need Love2D framework to be installed (they are basically zip files with extension changed to .love, containing the source code of the game.)

It seems to have some sync issues indeed: for my computer it's in sync but for some other configurations it isn't - your mileage may vary. I'll try to fix it in a future update!