Flask Runner
A game created within 180 minutes!
bitbrain
Rhythm
Play in browser
GIF
CORG-E
A small robot is trying to find the four gems of happiness. Built in 48 hours during Global Game Jam 2021
bitbrain
Play in browser
Bauble's Gate
Trapped in an endless cycle of despair, a small elf tries to make a living at Christmas time.
Game Dev London
Action
GIF
cave
Exploration craft'em-up. Uncover the mysteries of a mountain and forge powerful tools!
bitbrain
Adventure
Play in browser
The Commute
A game about the global pandemic 2020
bitbrain
Puzzle
Play in browser
hamorigami
#ldjam April 2020 submission
bitbrain
Survival
shelter
A survival horror game. Made within 48 hours during #minibeansjam5.
bitbrain
Survival
fishmonger
Created within 48 hours during #minibeansjam3. Fish and sell!
bitbrain
Adventure
scape
ou play a Virus, infecting the system of an evil corporation. If you succeed - you might change the world.
bitbrain
Platformer
pragma
A normal day might turn into a nightmare.
bitbrain
Adventure
mindmazer
Only you can help Jimmy to remember the way back home. Remember the path in this game to reach the top!
bitbrain
Puzzle
V0id
Neon-powered space combat, upgrade your weapons and destroy them all!
bitbrain
Action
The Legend of Studentenfutter
An adventure of a tiny peanut who is about to find his friends.
bitbrain
Adventure
AcidSnake
Snake meets portal, including GooglePlayGames!
bitbrain
Action
Plox
Defend the earth!
bitbrain
Shooter
ClouBoy
Collect as many clouds as possible - this is my #1gam submission for June.
bitbrain
Platformer

The sounds will be done by the amazing Tom Smith https://twitter.com/tomsmithsound who is actually really good at making sound effects. The current sounds are grabbed from Youtube samples and in poor audio quality.

I will dedicate an own devlog to the sound design of cave, as it won't be as simple as playing a couple of samples. I have the idea to make the sound system dynamic and flexible, based on the area and objects in that area.

If you wanna see a bit more about what Tom does, he also worked with me on corg-e:

A menu will be introduced with the next update. The final game won't be free, however, it won't be super expensive. Keep in mind that I am the only developer so the final release will be in many years from now!

Reply
GoGodotJam community · Posted in Can I publish a Devlog after Submissions End?
bitbrain23 days ago

Make sure to promote your devlog on our Discord servers as well! Let's all help each other out. <3

You can play the latest dev build on my Discord. This website will be updated once version 0.1 releases.

I have plans for at least another update, introducing different biomes, hazards, and mysterious temples!

Love the pixelart! Is this done in Godot Engine? I'd love to know how you did the dialog system with the animated font etc.

I like the game idea! It would be great if you had some kind of immunity timer after re-spawn, otherwise the rocks will kill you directly after respawning.

Am I the only one who thinks this would be a great horror game? All these people looking through the window and banging at the door gave me the creeps! Great job!

The world design of this is insane. I almost could not believe you did this just in 48 hours. Wow!

Wow! I love the intro sequence and the general atmosphere. Gives me Sea of Thieves vibes!

During Global Gamejam we built a little game in Godot Engine. I have documented our process in this video. Let me know what you think! 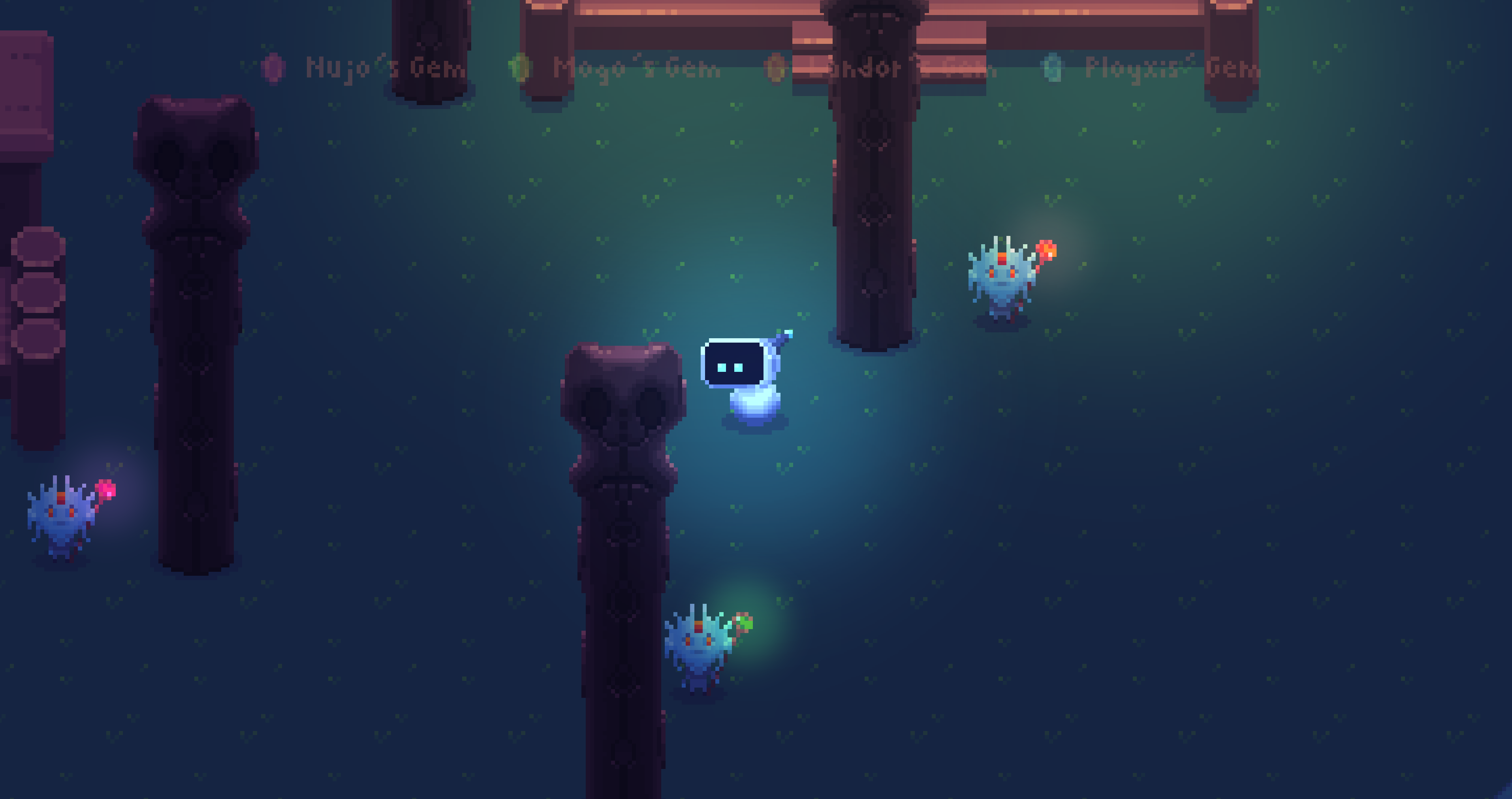 Wonderful idea! The graphics feel very slick and the sound design is superb. My only feedback is that the font is quite small on a 4K monitor (difficult to read what these mighty heroes want) and I am not a big fan of the time counting down in the period where the hero has not announced that they are looking for.

Great job and that soundtrack is amazing!

This game really surprised me! Initially, I had no idea what to do, it was not clear to me how I can interact with anything. However, the story is very intriguing and I love the dark twist at the end!

Tricky start but once I figured out how to fly around it was quite fun. Especially the rythm game rocks!

I love the ambience and the graphics. Unfortunately, I could not see any of the models from a close-up because the game auto-closes at the end! 😭

Yes, finding these gems feels currently not deserved. I need to add some kind of challenge. We had this idea of different biomes (desert, swamp, forest) and each of those has a huge temple with hazards and traps.

Godot Engine 3.2 - I will update the description!

Oops, I have not stated in the description that this game has been built in 48 hours only and I was the only pixel artist/programmer on it. :)

The newest devlog is up! This time I implemented save games.

There are no dumb questions. Many people asked that before and it is currently not obvious.

You need to have the right amount of items in your inventory (e.g. Copper bar is 2x copper ore and 1x coal) and it will smelt it automatically once you stand in front of it.

With the next big update, this will completely change!

There will be at least 2 more updates on itch.io (the final one will be 0.3 I think)

What exactly did not work?

Also, by floaty controls, what exactly do you mean? The game is in very early development and I am looking for all the feedback so I can make this a fun experience.

Correct! Also, the game will be free on itch.io until pre-alpha and the demo version will always be available here to play!

The game won't be free but it won't be super expensive. Just a few bucks I think.

Awesome! I am curious what you think about the prototype!

Do any of the downloads work? I have provided versions of the game for Linux, MacOS and Windows (64bit)

There will be. :) Stay tuned for more.

PS: the dev roadmap ahead is roughly 2-3 years. There will be A LOT of stuff I wanna do.

I agree 100% with all your points. The 0.1 patch will come with lots of improvements, including a visual revamp (higher walls!)

Let me know what you think about the new UI. Personally, I really like it, especially because its underlying concept is inspired from Minecraft/WoW.

Haha, thanks! Sounds are mostly placeholder, though.

A new episode of my devlog is out!

I have been very busy over the past few weeks and refactored a lot of gdscript! My game now has procedural generated caves. The player is in full control over what content is going to be generated.

The smelting process will be reworked with the upcoming 0.1 update. Instead of automatically crafting "something" you have to explicitly select what you want to smelt. There, you can also see what resources may be required to do so.

This is a difficult thing to design. Foremost, I want to build a game that I personally enjoy, and procedurally generated items or blueprints were never something I enjoyed.

It kinda takes away the immersion and the game suddenly turns into an Excel table simulator. However, this doesn't mean I cannot implement some kind of procedural generation. I have this idea of being able to have sockets on your tools. In these sockets, you can put special gems or other things that give your tool special effects.

For example, imagine I can craft a pickaxe with special powers. Special powers could be "explosiveness" or "earthquake" or "fire". However, those effects by themselves could be RNG to some extend. In order to add these special effects, you'd need to find the items in the world to create those powerful gems. This is all just theoretical and might not what I am actually gonna build, but you get the idea.

In a nutshell, I really wanna avoid having "too many" tools/equipment but rather focusing on a few that the player can customize as much as they like. And they can only customize them by exploring the world/cave.

Wonderful feedback! In regards to your idea, I had something similar in mind. "Knowledge" will become a game mechanic. What I want to avoid are situations like in Minecraft, where the player goes to the wiki and hyper optimises everything from the start, because that would contradict with the story. Cave will be a linear story game in that regard and players can't just "jump" to the end game, unless they remember where to look for.

Making seeds replayable is another objective I am thinking about. Yes, seeded words are already a thing and will come with the next huge 0.1 update!

Thanks for the feedback. Very useful!

As part of the 0.1 update, I will fix the item issue alongside many other Quality of Life improvements. To address your concerns, the roadmap of features will definitely change after the Smithing Update has landed.

In order to deliver a great crafting experience, I need to introduce some new concepts to make learning "patterns" approachable and immersive. Crafting will be very different from other games where the player "just needs to have the materials". Instead, crafting will be based on knowledge and SKILL. However, to learn patterns, you need to find/discover them within the world. All of that requires a procedurally generated world. All of that I am currently building and will show in more detail in my next devlog.

In the meantime, make sure you read up on the future of cave and join my Discord to get daily updates on the development of the game!

I am building this game on a 4K monitor. That must be the reason. Let me add that to my list to fix! ❤️