Large character package 02 community · Posted in Why were the other characters deleted?
billiumw65 days ago

I've been eying your packs also. I see them on the IFaction game market, do you have all the packs collected somewhere else if not here?

Cool that you uploaded your game, but I think you need to update the game page with some screens and information about the game. This would help get people to download it. :)

Finished Chapter five. I'd say the best so far. It was fun to be overpowered. Even with a somewhat robotic translation you do a good job making us like (or hate in one case lol) the characters, even the villians. I also got a few good laughs.

Thanks for the tip about the bug. I'll try that! I'll also sell my goods and use the blacksmith more! The part that seems uncomfortable is the a lot of the joking about sexual things with minors, eg the chapter two bar. I mean it's stuff that gets joked about on certain shows like south park for example. I wouldn't change anything because of my discomfort but you could always ask other people who play. I'm almost done with chapter four so I'll keep plugging away. Thank you!

Hi, I've been playing up to chapter four and mostly enjoying it. IDK if it's my computer or what but after playing for a while the cancel button doesn't work and it softlocks until i restart my computer. I will likely finish it sometime but I thought I could give you my thoughts maybe?

-I thought the game was funny, it had some lol moments. I generally only play RPGmaker games like this where the characters banter back and forth often. Most of the more lewd jokes I didn't find offensive but they made me uncomfortable, I keep playing because the rest of it is funny.

-You can tell the translation is done by someone who doesn't natively speak English. It's still easy to follow and charming in a way. There are certain things that i didn't really understand, maybe they don't translate well over here? Specifically some of the insults that are slung around, such as pork fannies lol..

-The combat is easy to understand and not too difficult, sans for some bosses in ch. 3. I like that after so many random battles you won't get more, and you could just grind them out until the counter hits 0 with the fight! command in the menu. I also like the stat gain system. I feel it adds more power to your characters than equipment in general.  I personally think that some of the boss battles are a little too drawn out, particularly the ones at the end of and after chapter three, but this is a personal taste thing.

-Parts that stand out in my mind:

The simple puzzles the characters have to do individually in chapter one.

Having the guy in chapter 2 not like your choices is a funny wall breaking joke.

Chapter 2 in general was pretty enjoyable, being all silly banter.

I love how the treasure comes from dead people in chapter 3, and the character's slow decent into thinking it's OK to loot the corpses.

The story and dialog at the beginning of chapter 4.

Overall I felt the story was more interesting as the chapters went on.

So anyway, thanks for listening to my rambling. Good game, look forward to more.

Continued the game, on chapter 4 and got an error on the second pirate boss. i think it has to do with trying to heal when zombie. 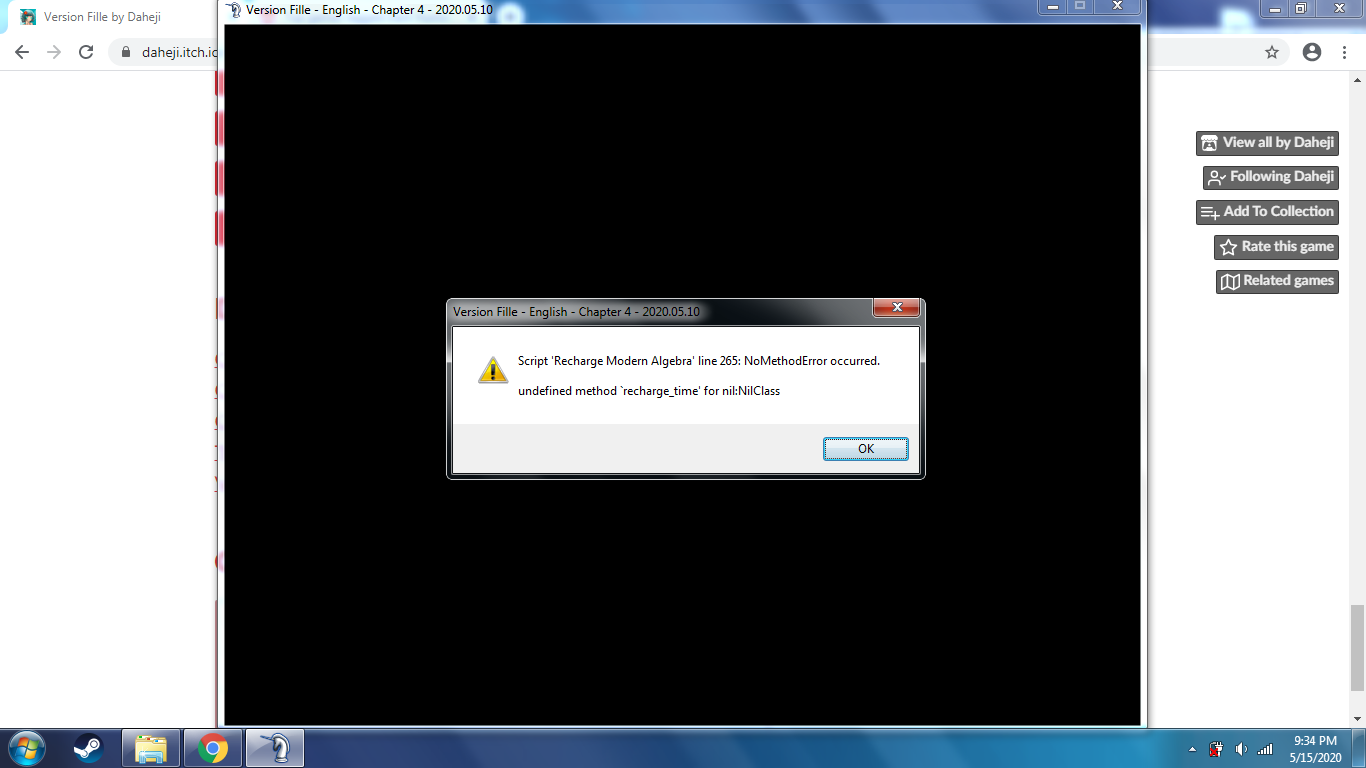 So I restarted my computer and that seems to have fixed things but ill let you know if it comes back, thanks!

Hi, I played some of your game. I'm enjoying it, but the cancel button doesn't seem to work, which often causes softlocks. Just thought you should know. I've completed ch.2 but got locked out near the end of 1 and beginning of 3.