I'm on Discord, what's your Tag?

Current browser version crashes the first time I use the sword, tried it twice now. Crashed both times. I see you've made the intro even longer haha There are a great deal of grammar issues and poor english, I'd be happy to edit your scripts if you'd like?

Was going to play this middway through your Youtube video... But there's no Mac version, so I'll just have to watch the spoilers ¯\_(ツ)_/¯

Seems like there's enough comments asking for Mac version to warrant uploading one.

Awesome, would love to play the demo! No need to send me the money back, happy to pay it. I'm on Mac unfortunately, need to get myself a gaming PC haha So many indie games that aren't available on Catalina because they're 32bit :'(

Hi, just played the demo. Just wanted to say I love the art and feel of the game, nice smooth controls and animation too :)
On the downside, there are a lot of grammatical errors in the speech, which is a shame.
It is also a very slow start to the game just talking with little movement or progression.
Might be nice to have a bit of animation, perhaps one of them pacing about the room and moving the conversation outside when Fasteus knocks to freshen the scene rather than him come inside?

Also, it would be nice to have a downloadable version, I just paid $2 thinking I was downloading the game demo but just got a pdf file instead... That was dissapointing lol Should have read more carefully.

Much longer games would be great, not sure infinite would be though? You need some kind of goal or end to the game. :)

It would change the gameplay in later game yes, but that's the point, it would be a late-game purchase so you can choose to buy it and clean up and mistakes you made early-game.

Getting pretty addicted to this despite what I said above, been filling a lot of my spare time between work etc. Getting some nice results for tech and happiness but I still feel like the end result is quite dependant on pure luck. Sometimes you just can't do anything with the planets you're given... Much like real life I suppose. :) 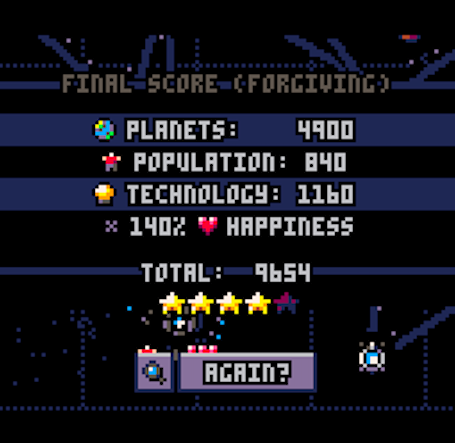 Is the updated version the "Ghosth_1.1_Web.zip" file? I love the original version for LD40 and would like to try the new improved version but I'm on Mac.

The only opther point I would add is longer play times, it always feels like the game is over too quickly. Maybe extended maps with open ended games (game ends when you reach a goal rather than time limit) so you can explore further would be cool too.

Really enjoying this game, just purchased it after having been playing it in the browser for a few hours the past couple of days. There are 2 things at the moment which I think could improve it  for me personally, the ability to unlink slipways at some point and being able to zoom out and get a better overall picture, or have a map you can open. Another feature that would be great would be preset maps so that it's not so random, having a defined goal or missions goals per level could be good too. You've probably already thought of all this but just thought i'd give my thoughts. I really enjoy the passive style of the game and the addition of military would probably ruin for me. Perhaps being able to choose a passive mode would be good too.

Are you still working on this, it looks promising :)

Nice concept but a shame there is no end once you're maxed out, just watching the sea of birds fly by while my life creeps past 800,000,000 pts lol

Really enjoyed playing this, great little game. Nice simple visuals which work perfectly with the gameplay and great music. Really appreciated the light humour and storyline and enjoyed the difficulty options with each level, great idea. I'm not sure what the choice of characters really added to the game, if anything I feel it detracted from the story if you're changing characters as you progress through the game. I didn't notice any change in abilities or difficulty with each player so I assume it's purely aesthetic? Overall I really like it and would love to see a sequel or extended version, could happily play this for a much longer period of time. Completed the first play through on Contact in 1hr 40mins and although you have the re-playability in other difficulties the storyline is already over. Already recommended it to a few friends!

I just got the book Awaking Beauty for christmas so it's fresh in my mind, love his art too!

Just had a look at all your work, definitely inspired by Eyvind Earle. Perfect style for pixel art really, really like all of it.

Looks highly inspired by Eyvind Earle's art, I love it!