This is such a cute game!! I've spent a long time just idly taking care of all the cute cats and trying to get everything I can ingame, hehe.

But when I try to sell more than one adult cat to the people asking for adult cats (most often the Lady), an error pops up and I can't play the file again without starting a new game.

I'm still in the middle of playing thru this VN after putting it off fur the longest time- but dang, do I efur love it!! All the characters are so loveable, and I relate to Isaac and Nem the most!! I love the music, the whole world it builds, efurrything! <3

Also, I don't know if it's intentional, but the way Isaac's transition from yuuman to synthetic is handled reminds me of a lot of my own (gender) transition, and that just makes me love it all the meowre! :3

yeah, i've noticed a similar issue when first meeting with bradbury, he refers to the mc as "he" in one instance even when i chose they/them pronouns.

THIS GAME AAAAAAA where do i even start???? /pos

so, i furst heard abt this gaem when i was chatting with a furriend of mine about furry visual novels we were playing- and he told me about echo! and oh gosh, i finished it about a week ago and i just... dont wanna let go of all these characters and the world they live it, it all just feels so real and believable and well written!! (even tho it did make me anxious a few times ehehe but i just stepped away when it was too meowch fur me)

i swear, i'm never going to forget this vn <3

might've been the fact that i was on new medication, but dang this game gave me so much anxiety /lh
other than that, this game sorta blew me away, its purretty amazing!! the story's been stuck with me since i played it, i want to discover efurrything about it (even tho it'll purrobably make me anxious again dsjkgdsg)
i keep meaning to read the bonus doc since i claimed the game when it was free, but i keep getting told no files are available to download no matter what i do :/c

on the days where my chronic pain and fatigue are bad, i always come bacc to this game- something about it just feels so beautiful, depurressing, and comfurting, all at the same time <3 is there anywhere i can listen to the music on its own?? ive kinda been keeping the game open to listen to it, hehe.

why does this have so many downvotes???

i was kinda hoping for the same tbh, since i use they/them pronouns as well, but on the other hand (paw?) its interesting to see who the character we play as is :D

hehe, I really like this game! I recommended it to my furriends too, and they all love it as well!! We might start a little discord photography club because of this game just to share the photos we take ehehehe

will the steam key thing be for efurryone?? or is it only to people who paid a certain ameownt or something? :0c

instuctions unclear, 10x more anxious and depressed than i was previously. /j

jokes aside, i liked this game! the little dialogue changes were neat, i really like that taylor uses they/them purronouns (i'm a they/them nonbinary purrson) and i guess i really related to them a lot! I thought dr kreuger was p nice at first, albeit a bit mysterious, and even after getting all the endings, i'm still rather curious about him (as well as taylor!)

this is really cute!! i love that the character creator is diverse and doesnt even have a gender option (tho thats purrobably just beclaws im nonbinary) the art style is really nice to look at as well!! <3 i'll definitely be waiting for more as the game develops!! :D

i think you're valid as hecc, go love that spoopy creature as much as your heart desires :D

This was a cute, fun game! The whole world feels like something out of OneShot, and I really loved it. I wish I could know more about the lore and the world... It's so beautiful.

this was honestly such a great experience- as someone who's dealing with an undiagnosed invisible illness, everything about rae's story just.... related to me so perfectly. not being able to chat with friends as much as i'd like, desperately wanting to find whatever the name of the illness i'm facing is, even getting dead end answers from doctors. i love this game so much <3 thank you for making it :D

I just started playing this game and I really like it!! A pet sim and a bullet hell in one sounds really neat!! But I'm so nervous about accidentally killing Gato... So I made a system restore point just in case.... ;_;

I really love this game!! I got it from the racial justice bundle, but didnt get around to playing it till now- it really creeps me out, but like.... in a good way? it reminds me a bit of OFF too, but with more religiousy themes.

also!! i really appreciate the options to toggle the flickery screen effects and such on and off- I'm autistic and have a bunch of sensory issues, so that was really helpful for me. thanks <3

oH i didnt think of those

wh..... why though???? i wouldnt want my controller to be covered in

ehehe, sorry, this got a bit long and rambley, but i just want to mention how much i love Purrfect Apawcalypse, despite only discovering it at like, 1am or something. (also i'd totally be throwing my money at this series if i wasnt broke)

wowowow where do i start with this??? :3
ok, so i first discovered the game really early this mewrning! yeah, this one! it had popped up while i was scrolling for new itch.io games to play! i clicked on the link leading to the first game, and i was a bit iffy about the gore and blood, cause i'm in a bit of a fragile mental state currently, but i played it anyways and wowie did i ever love it!!!! it took me a while to get the "everyone survives" ending, but i succeeded!
then i went onto the second game, purrgatory furever, after taking a shower!! (and giving myself a furcut- i mean haircut!) it took me a lot longer to even get past chapter 2, but i managed. i trusted the meat. by this point, i was absolutely enamored with olive and their little group of furiends, and beclaws i'm nonbinary as well, i really felt like i related with olive's friendly character and their point of view!!!
by the end of the second game, i didnt even pawse before moving onto the third game, here. i really wanted to see efurryone's adventures and interactions- they felt like my furiends, too, and i was so happy to spend more time with them all!! thankfully, i managed to get the purrfect ending on my first playthrough, and now that i'm done, i'm here now writing this review at 10am, having not slept at all! gosh, i don't think i'll ever be able to furget this series and all the loveable characters! it was an amazing ride from start to finish and i'm honestly a bit sad that it had to come to an end. but really, i just want to say thank you to the devs for taking me- or rather, us, all of the players on such a wild ride through this series! it really was purrfect!<3

i've discovered this game through the racial justice and equality bundle, and have been trying to play this game little by little- my sensitivity to light makes it very difficult, unfortunately, since i'm autistic.  ;;  I have a terrible headache but it feels (mostly) worth it! I love the concept behind this game and the music and story so far!

...also, will there be any sort of an alternate display mode for people with epilepsy or sensitivity to flashing lights?? i feel terrible that i can't continue D': turning off the CRT flickering and scan lines definitely helped a bit, but not enough that i could continue :(

edit: i wanna clarify that i did read the epilepsy warnings, i just.... thought i'd be okay but it turns out i'm not ;w; 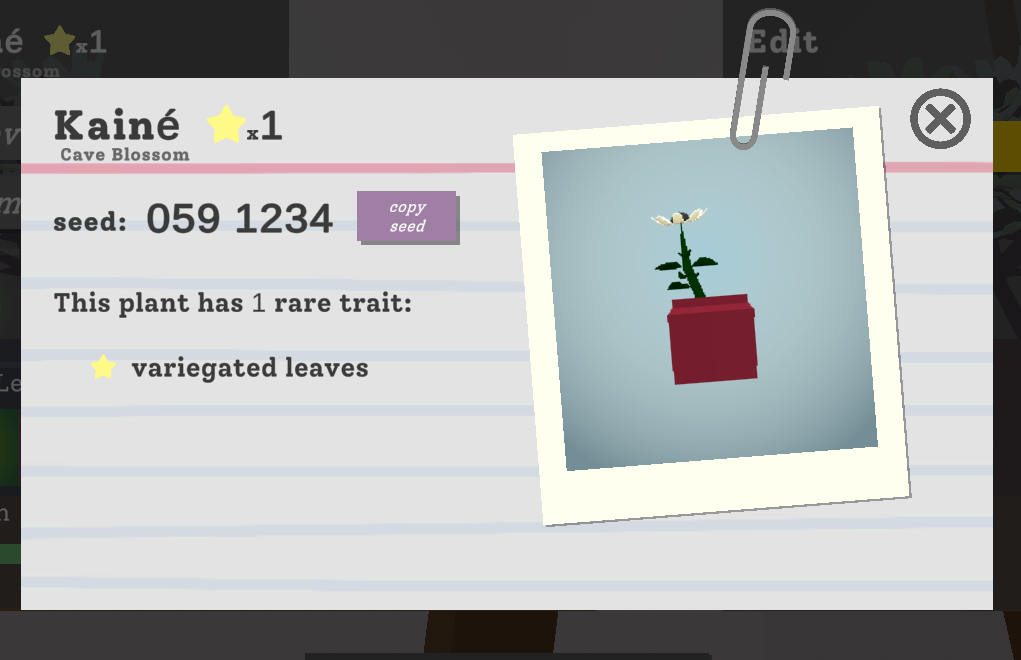 Oh, I got that food bug too! I mean, assuming it's a bug and not intentional? :0c

I found this game through the Racial Justice and Equality Bundle, and I have to say: I'm already loving it so much!! It gives me a bit of an Undertale vibe, but without the fights- I've always wondered how a game like this might go, a relaxing slice of life sim where you can be friends with NPCs who aren't human! So this is sort of my dream game, thank you for creating it! <3 I already feel right at home in the town and I'm super excited to see more of where this game goes! :D

I have Yuri here! Though, they're closer to purple than black :0c 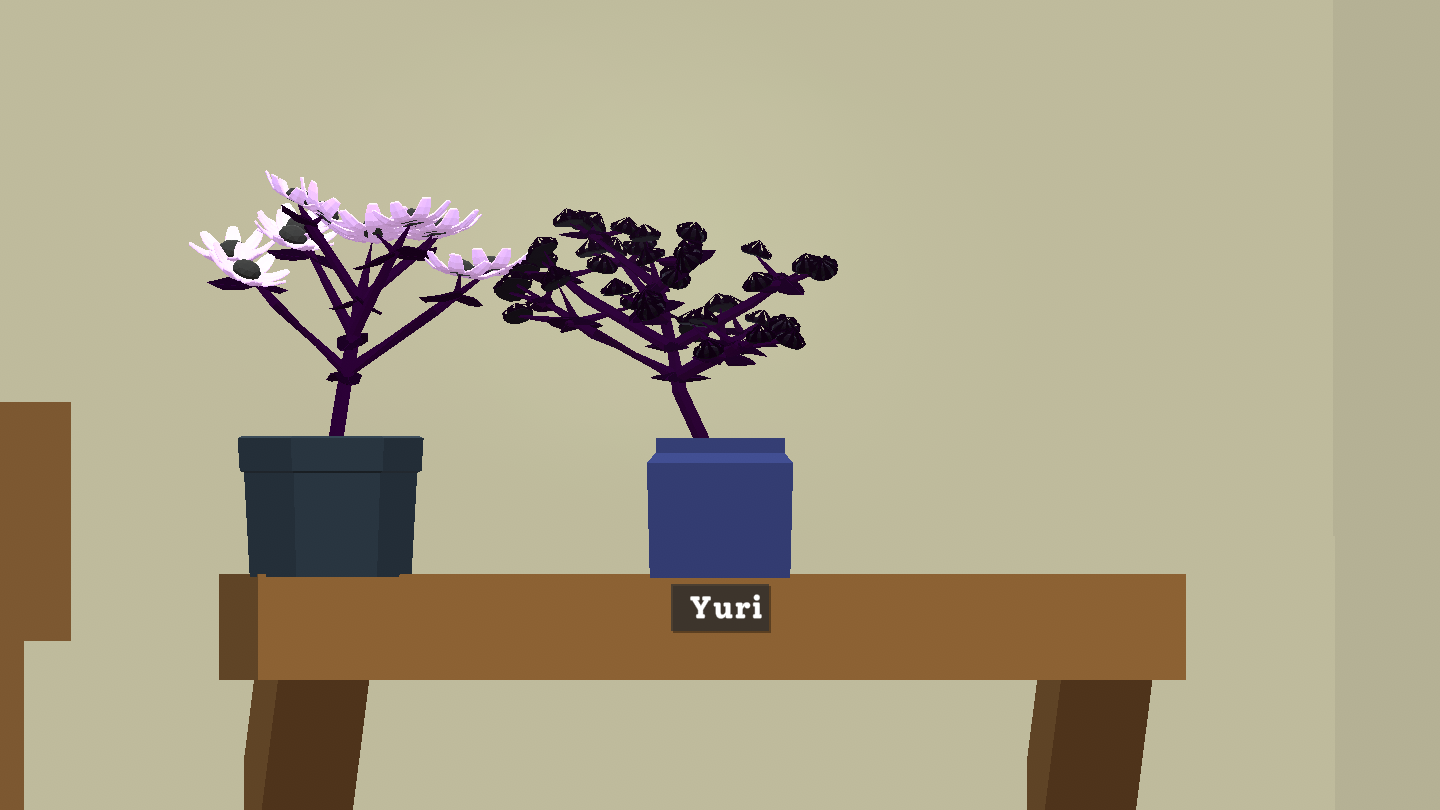 Edit: woops, they werent fully grown, and their flowers are minty green. i think someone here had a black mushroom though!

i was looking for games where i could play as a harpy, and i came across this adorable gem :D thanks for creating a game like this- i'm looking forward to more harpy adventures in the future, hopefully!! :3

i really love birds of all kinds, so when i found this game through the racial justice and equality bundle, i played it right away! and it was really addictive, too- i managed to unlock all the chicken colors in one sitting!! :D i... think i spent hours on the game already. i love it so much!!

will there be a downloadable version for offline play, as well?? it'd be really great to be able to play when i don't have internet, cause mine is really bad and always disconnects, so it'd be nice to have an offline version to play :/