Hi! I'm not on a Windows computer so I'm not entirely sure how to fix this myself-- I'd recommend backtracking and looking through the folders/locations that it lists to see. Maybe Google it as well?

Sorry again-- I'm not much help in this regard.

I didn't quite process what this email notification was for a minute, but now I'm supremely excited to see this new project of yours! It looks amazing and I can't wait to see it when it's finished ^^

Some how I managed to miss that this had released! I'm trying to resist until I get paid this month to buy it but aaagh T^T

I haven't even played this and already the immediate thought I had when I checked this update was "PASTILLE".

So we know this is gonna be amazing.

Happy Lantern Festival! Also it was really fun reading the chats in Chinese! This is a very cute game haha

(breaks down the door) Thank you so much! :0

I'm also having the same issue. I would like to request a refund if the issue doesn't get fixed.

Thank you, that fixed it.

This is such a good game! I did something silly and forgot to move the game to the Applications folder; but once I did it was a very fun play! A very spooky but fun play.

I'm very late on this but thank you so much for this guide! It's great having the option to turn on font for the dyslexic and I probably would've never found the other resources on my own.

I think it's still under development, just not actively so-- instead of aiming for a release date and solely working on this project, it's kind of having small work done here and there on the side. That being said I could've misinterpreted the og post when I read it.

As much as I enjoyed the game, my main complaint is how one of the routes is the MC basically dating her brother. While yes, it's not really dating someone related to her by blood, it does make me uncomfortable because adopted/step-families are still families. Making Rod a dateable option, for me personally, made me unhappy for families that do adopt or are step-families and families that are not necessarily related entirely by blood. I still love the plot/curse of Rod's route, and it was fun, but it did make me uncomfortable to a point (though they at least somewhat acknowledged it).

Waltz was nice, but in comparison to the other routes I found him rather boring. In all the other routes, both the MC and her love interest develops as a character/person that ends up working together... but in Waltz's route, he just 'taught the MC to be good/kind' and he stayed exactly the same.

That's not to say that I disliked the game; the art is gorgeous, the UI was beautiful, and I really liked the writing and all the characters; the two complaints are above are the only complaints I really had about the whole game.

Almost a year later, I am still stupid at muddling around the escape room xD

This looks awesome! Time to use Wine to play through it again. It's both adorable, and yet compared to your Treat games it feels a little eerie too. I'm really excited to play it.

I played for most of the day today, haha. Unfortunately I can't figure out that one ending with the detective's secrets, but overall the art and the story was really fun to experience; even multiple times in a row.

Are you on PC or Mac? Mac has the automatic thing where it will unzip files on its own; PC you might need something like WinZip. (I don't know, I do not own a PC.)

I made a visual novel for this game jam (it's also a submission for Ace Jam 2020, but it was all completed within the jam period) based on the old Chinese myth of Chang'e, the moon lady... with a touch of slice of life, a stranger who cannot speak her language, and ace girls. 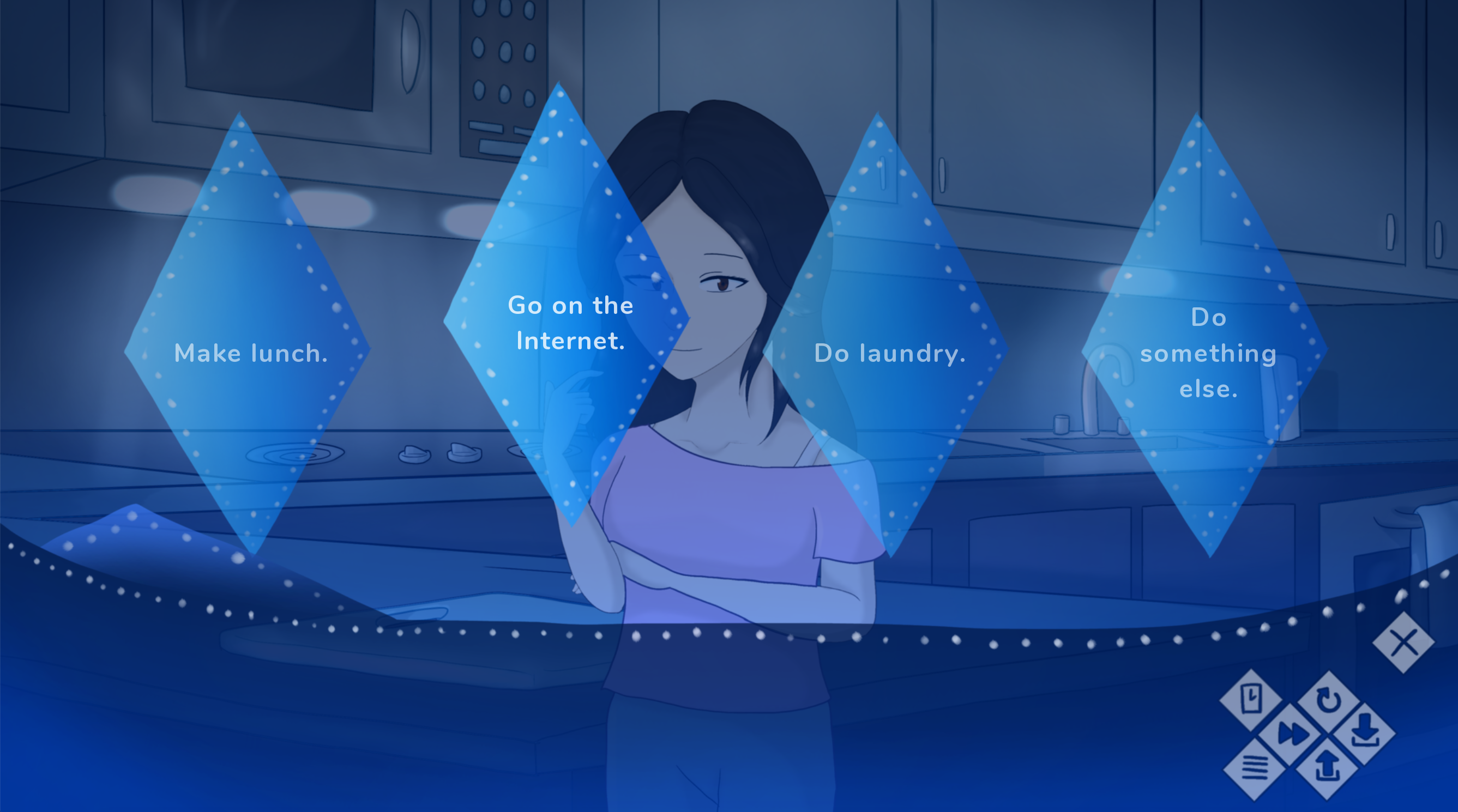 It's about ten thousand words long, so it's a pretty quick play if you read quick. However, warning, there are flashing images in the game, so players with epilepsy might want to refrain from playing.

The music was all copyright free music, and all assets were created within the time period of this jam. The GUI code was based off of a different game that I'd been making.

Well, I just realized I never reviewed this game, which is a gross oversight on my part.

This is such a good game; the CGs are so beautifully drawn but then the characters look perfect– almost like the original show, except with a little bit of originality that feels and looks great. I unfortunately haven't played through to listen to the music due to playing this while I was supposed to be working, but the comedic moments always hit well and the writing almost feels like it's a continuation of the show.

TLDR; I love the game a lot! It's cute and you can tell how much work and passion went into the project.

Killersoul's kind of a sweetie haha. I'm really enjoying the mysteries– and it's getting really juicy here, haha. >:) I'm excited!

It's okay that it's late! Take your time! I'm just really happy to see the updates– they're always really fun. I like Ashdown and Woes, and Tronen's not bad either. I feel bad for them though xD

I really love this game! And I hope we get to a thousand downloads soon– you've been doing awesome.

You're doing fantastic! I'm really happy I managed to find this visual novel; the characters are engaging and the pictures are really well done, all fitting this really quirky style that I seriously love. Not to mention the story itself is interesting and you never reveal your hand too early, so a lot of the backstory is sitting in the dark and we stumble across it or it leaps out at us without warning. And 7-whatever-number-of-mysteries-he's-solved-now and Nell's friendship! (I hope they make up eventually fjdk;a)

Thank you very much! I really love the mystery so far-- and what I ended up doing was running the Windows version with Wine, because I loved the story a lot. I really like the characters and Beatris's backstory is very interesting to me. You've done a lovely job!

Something interesting I noticed is that the game has the fixed 'level up' until I spend pearls on the defense things, and then suddenly it... doesn't, anymore. Like it'll start increasing. I'm not sure if that's supposed to be a feature or if the fixed level-up was the bug in the first place...

This is pretty enjoyable! I enjoy the Persuasion and Questioning. Makes me feel smarter than I actually am, haha.

One small note for the Mac version; it doesn't appear to let me save for some reason. I know that it's an unstable version, but it's still a bit of an exasperating experience to try to use the phone, only to be unable to save the game. It also means that I lost my progress once I got pretty far in the game, which was a pain.

I still loved the game so far; but unfortunately I think until you can make a stable Mac version I might hold off on playing the full version.

It's really cute! I absolutely love it (again).

Ooooh, I like this so far. I especially liked how you just get tossed into the woods with no explanation. Like, "hey, spooky forest-- in ya go!!!"

Very much like a first-person fairy-tale so far. Really excited to see the full version.

It's not your fault on the columns, I'm just a bit of a dumb butt and figured it was more like Prison of Lies (where you didn't have to click one word or thing in every column), haha.

Glad the issue can be fixed! You're doing really great on the visual novel. I really love the characters and the story's interesting. (But I miss Nell, haha.)

The sixty dollars is for early access-- you get access to each route as it comes out. 30 dollars is cheaper and is for after the game is fully released; so depending on if you want to see the rest of the game now or if you're willing to wait until it's finished, both prices are fine! 30 is cheaper though, so if you feel like 60 is too much it might be better to wait until it's come out.

When I try to click on previous chapters (to reread) it jumps me straight to Chapter 23.

Ah! I didn't realize you could click multiple in one column. My apologies xD

This may be a small bug but I can't access other chapters-- just Chapter 23. Also the minigame is really a stumper-- I figured it'd be stage two and round four and the thing at the end, but apparently I was mistaken.

Mellie is very quickly becoming my favorite Gamemaster because she's silly and also very lethargic and honestly I identify with that.

Thanks very much! Sorry for the inconvenience haha.

Ahhh, that's awkward. I have the game downloaded; I just can't download the newest file. 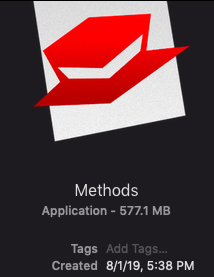 Just to check-- if we've already downloaded the game, we won't have to pay for new content? Sorry, I know you said it above, but I want to double-check, since I'm... very paranoid, evidently.

I think my only complaint is that Leena takes forever to level up and mind break.... like the others have a few higher-level things, but Leena takes literally days to get anywhere with. Otherwise, this game is well done so far! The overarching storyline is interesting.