! (KINDA?) HUGE SPOILERS FOR DAY 24 PATH A OF THE NEW UPDATE (They're subtle so not EXACTLY HUGE spoilers but still, a warning regardless). PLEASE DO NOT CLICK UNLESS YOU'VE PLAYED THE NEW PUBLIC BUILD UPDATE. !

I don't want to say anything, but that felt a little too obvious... Def heartbreaking update anyways, this is by far one of my favs because it just- portrays the whole thing so well?

Thanks for this masterpiece Grizz <33

So, after playing the new update, I have some... Thoughts.

POSSIBLE SPOILERS? VIEW AT YOUR OWN RISK.

Where did the new sprites come from? (David's and Jack's).

Does this mean we're going to get all the characters in this artstyle soon? While I don't dislike the artstyle, I still dunno how to feel about it. I do like it a bit, but I'm not too sure if it fits the game a lot.

This also brings up a question I wanted to ask Grizz for a long time.

Why are the side characters the ones with different eye colors and poses? Iirc, all Dave's friends' sprites have a "default pose" and black eyes. I may be thinking about it too much, but it was always weird how the side characters had more developed sprites than the main characters'.

This new build gives me a lot of hope, though. The story is coming to an end, and I am definitely excited for it. I actually also am quite intrigued by how the rest of the cast will look like with this new style.

Thanks a lot for bearing with me as usual!,

There is the update, Grizz just forgot to announce it. Check the download files.

Grizz what are you trying to tell us 👁️/j

Will we ever get Password unused content? Just for pure curiosity, one day I'd like to find out more about the game and some scrapped ideas. Of course, I am not saying like, now, but it's definitely something that interests me.

I hope I am not too annoying LMAO 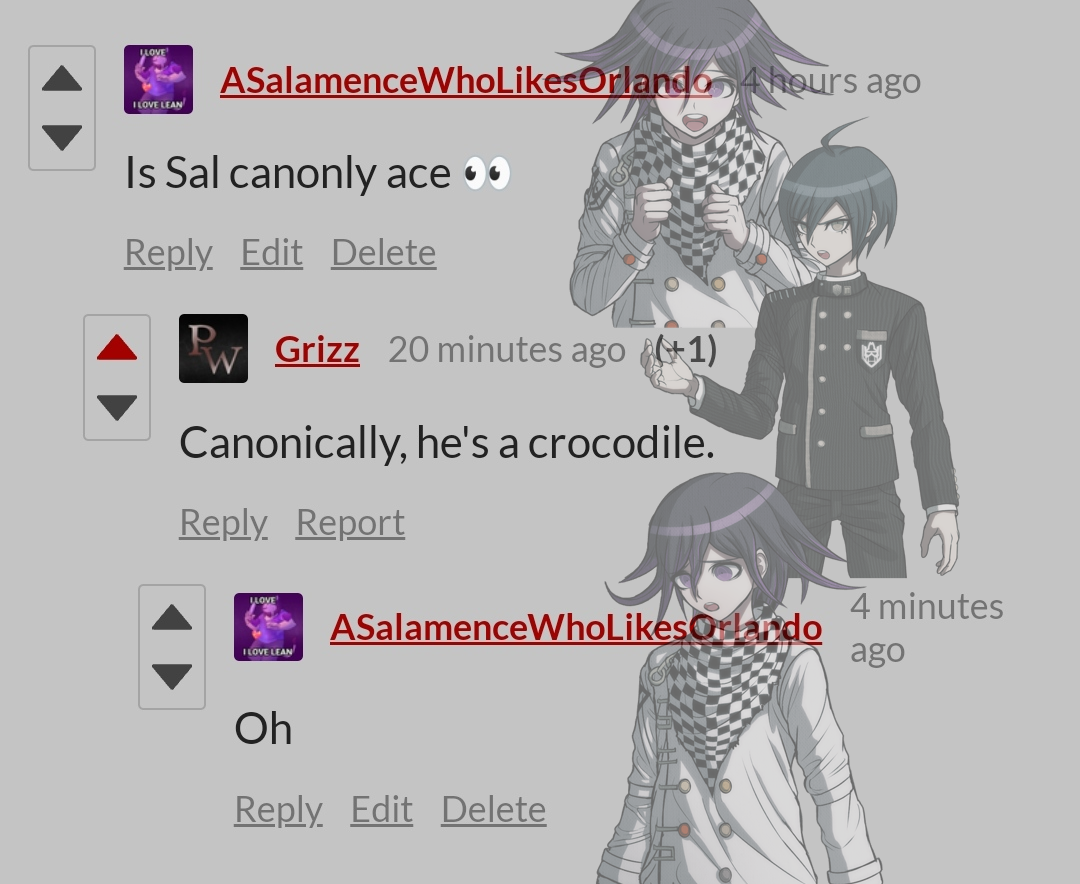 Everybody suspects Hoss or Roswell, but Orlando honestly has so much red flags, I really don't wanna believe its him but at the same time... qwqqqq

Hold up when did Password have an unofficial Russian translation-

OMG I KNEW I WASNT THE ONLY ONE 😭

OKAY I JUST TRIED PATH G AND WHAT THE-

So Path G is totally different?

Just another thing I wanted to point, this game is very good and all, but I've encountered a lot of problems with the buttons' hitboxes while playing it.

Oh, Nevermind. I only needed to click Rollback and Load Save. It kept happening if I clicked "continue", but Load Save worked for me, sooo

Uhhh... What does this mean?

For his neutral special, Benson wields a gun

... Too bad Roswell does too

Dont tell me people ship him with David no-

Hes hot but fuck him 🤮

Spoilers? Not really but ig

I AM SO SORRY BUT THESE SPRITES- 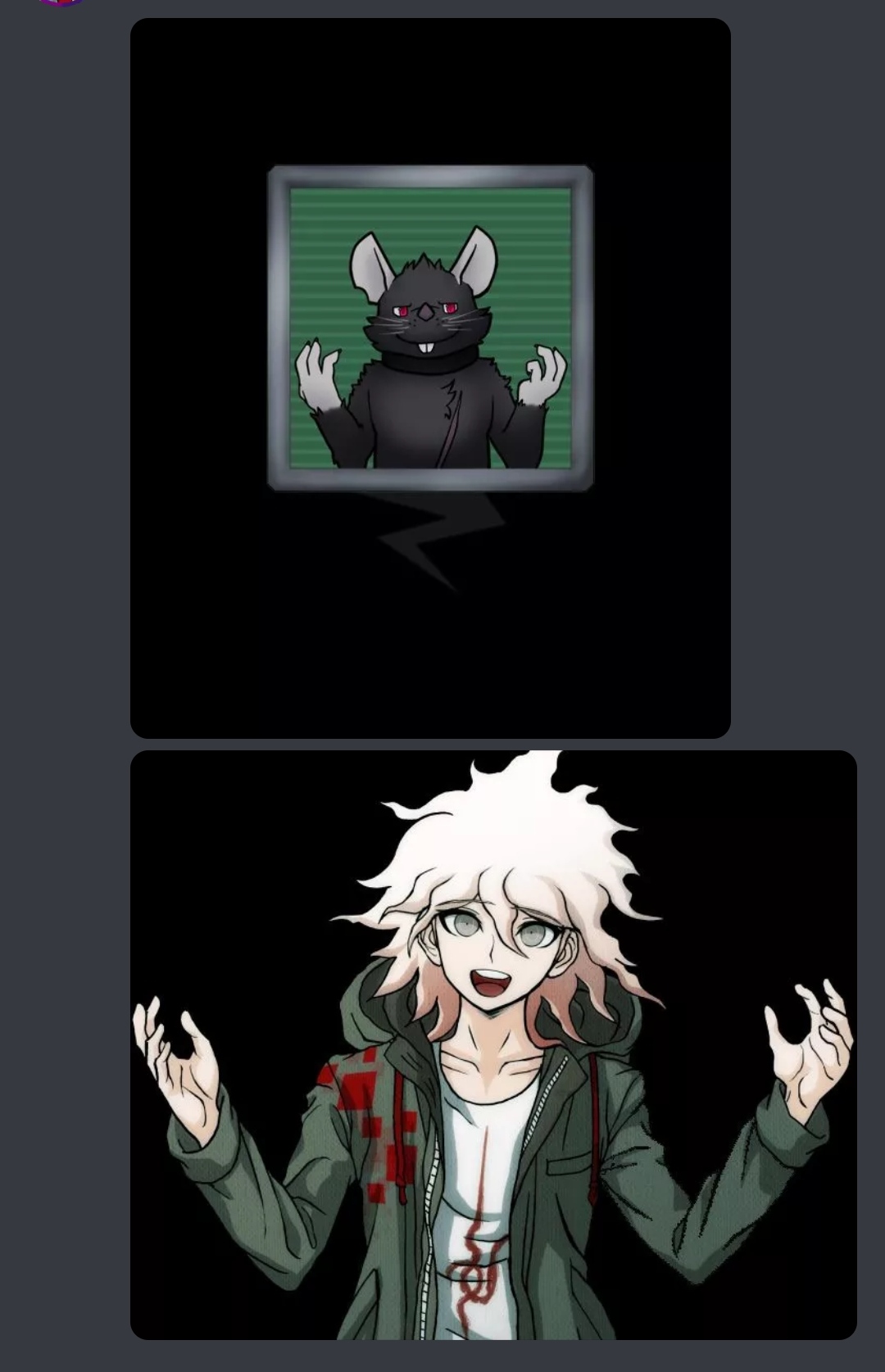 He could still be pulling a facade or something but you're right, most likely not

Totally fair, that reduces my fears a bit. It could always be possible, but honestly I just really hope it's just my brain playing mind games on me dhxhchcbbc

But do you think Orlando may still have a chance to be the traitor?...

Oh I meant just the main ones-

And yea ig that's fair, I theorize too much myself lmaoo

Ok guys, I have read a lot of these "Man this guy is sorta sus" kind of comments and (POSSIBLE SPOILERS, WATCH AT YOUR OWN RISK)

I swear is it just me, or are Ross, Hoss and Dean always the suspected ones? I can definitely understand why but I think that's actually the reason they may not be the traitors. I have a huge fear and please, if someone can deconfirm my theory, please do. I am highly scared.

I put a sort of "scale" of which character is more suspicious than the others and Ive got something like this (or atleast in my opinion) :

It's clear it most likely is not Tyson, and I think Hoss/Dean are simply red herrings. Roswell is highly sus but I think maybe it's on purpose. I also doubt it's Sal.

And that just leaves Orlando.

I don't know, I really am scared, because he seems to be somewhat in the middle, and nobody really suspects him. What if he really was the traitor?

From my personal experience, it's like "kind" people are the most likely to hide something very dark behind them.

I just really don't want to believe this, I know, it's a stupid theory, but I have so many suspicions. Orlando is my fav, and that would really hurt a lot-

But that's when I found something strange.

This is the file name for Orlando's death scene. Most of these CGs are usually "characterdead", except some of the alternative paths' CGs and two characters : Orlando and Roswell. (I will not say what Ross' is though.)

Valid point, but it feels so weird to see Orlando's death file named like this.

I think Grizz is planning something for Orlando, and I have a huge fear he may be the traitor.

Yea it's really only a dumb theory but I really have fear it could be reality.

That's totally fair, honestly I just really wanted to rant about how I really just feel like the reason everybody likes Tyson is cuz "haha funny wolf bully dude go brrr" and that it also is partly the reason a lot of people dislike or even hate Roswell. I don't even hate Tyson but I just really think the Password fandom is a bit too obsessed with him. Everybody is entitled to their own opinions and that's fair, I just don't really get the hype that much.

Okay so sorta late but I wanted to apologize for the Tyson thing that happened some days ago shxhxhxbdbdb. I sorta went overboard there...

All I can say is, I am sure they probably didn't even understand the point of this VN in general. Even as someone who ADORES Orlando as a whole, I am never like "Ughhhh I want more gay stuff OrlandoxDave fanfics shxhxhhx".

Since Ive played this game, I have realized this is not a "Dating Sim". It's a real well done story, with well written characters. I am again so sorry for sounding rude for my claim on how Tyson is "overrated", it's mostly just a problem of the fandom, I guess.

I don't even mind the few gay-ish moments, but I just wish, people could look a bit deeper in your game, yknow?

I know I sound like a weird boomer reviewing a game, but your game is honestly SO good that I feel like I should say all of this. I just don't feel like people should consider it some sort of full-on gay drama game, because it's not. It's more than that.

While I do agree that Roswell may be somewhat annoying to some and he did some stuff like that, I personally find it weird that like nobody talks about how Tyson used to be a literal school bully but Roswell is immediately called out for his actions.