I would like to know if "Reapers" "SinEater" and "Urban Legends" are real comics or were created specifically for the game.

Beside this, very good B-movie like game with an amazing serial killer story.

Nice reply. Anyway, beautiful intense game. Beautiful soundtrack too, I have listened it on YouTube.

I think there is an error in a part of your game (in the screenshot).

The protagonist says "I've never met a person with four fingers before", but, actually, that "person" got five fingers. 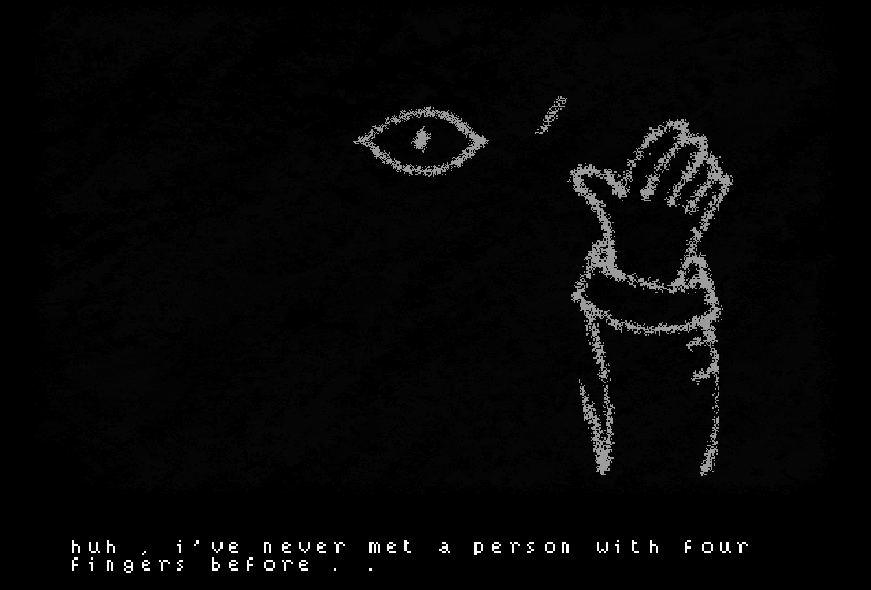 At the end, this game makes me thought of two endings: one cruel, one sad.

Thank you for your reply. I will follow your project, anyway. I am curious about the future developments.

I had already rate your game 4 stars, I did not expect a Linux version. Thank you.

If you do not mind, I report you some small aspects in Linux and in the game despite Linux. I try to not spoiler.

Linux: the executable file only opens by terminal, if I click it twice, it is not recognized as has an associated program to open it. Maybe could be a solvable problem in Linux itself, I will search about it. Nothing too bad.

Game: The object released by the aliens does not disappear after used it. And the object given by Bigfoot does not appear after received it. This is not a real issue because everything is solved after change the room or change the character. Another small issue is that sometimes appear the text about scare of Bigfoot when room change or character change.

Strangely, I cannot play the game anymore on browser, after clicking to start the game, it is playable but only black is displayed.

I cannot judge the controls because I use Linux but I think it uses tank controls.

Good, but a Linux version would be appeciated.

Thank you for this special demo.

Although I am not a Mac user, I am so glad to see that you really keep in account your customers' requests. Compliments to you, Casper.

Casper, I was very impressed by this trailer. If you keep in this way with your horror/surreal imaginative, this will be a grade A horror video game.

Many thanks for this Easter Egg, I have appreciated it so much.

I liked this prototype: action puzzle, dark sci-fi, sudden deaths that lets shocked, retro graphic. I have appreciated so much the "unreachable" mirrors, but the cherry on the cake was the "sacrifice" (very shocking).

Croes, There is a small bug in the last version 1.25. Is not easily to extract the weapon.