This is great, thank you for making it available to everyone.

These are really cool! Will definitely save them.

Thanks for letting us know! Will do if we use them :)

This is really good! Kind of you to give it to the community 😊

We have updated some of the HUD elements following your feedback. The changes are as follow:

Some other things here and there have also been polished slightly. Here are some of them!

We hope you will enjoy this new update! Thank you for your feedback and support. Bugs can be reported here.

Hi, what's the license for these bases? Can they be used in commercial projects? :)

We are working on a separate bigger update of the game! Updates will be posted on our Twitter so stay tuned 😊

Neat! I can't find the LD page, is there one?

The mood was pretty good and the levels were really neat. The only thing we would point out is that the height of the character and the wall graphics make it a little hard to tell where you can walk and where your hitbox is sometimes. You can also "cheat" by hugging some of the walls.

Really neat! Love seeing a rhythm game. I even found myself walking around just to hear the beat 😄

The only thing I was mildly confused about is where the player's health is displayed and how/when it regens.

Hi everyone, thank you for checking out our page! Bee Beesness was created from scratch for Ludum Dare 48 (jam) and we did our best to get as much of it done before the deadline. The LD48 version is our (somewhat incomplete) jam entry, but we might update the game in the future to bring it closer to how we intended it to be. We plan for the jam version to always be there as a little memoir 😊

Bee seeing you around! 🐝

In Bee Beesness, you manage your own growing beehive. Each bee takes a certain amount of honey to create, ranging from 1 for common bees to 10 for a new queen.  You can hold as much honey as your cells allow. The goal is simple; grow and become the beestest hive! However, once winter comes and the flowers die, your bees will need to survive on the resources you've stored up until then. If you don't have enough honey to feed your bees, they will starve one by one, leaving your hive vulnerable. Each bee in your hive eats one honey every winter. The winter bar shows how close winter is from beginning.

If your queen is killed or starves to death, your hive will perish.

Once your hive reaches a critical mass of at least 50 bees, you can press the split button to split it in half.  The bees that split off will leave your hive to create their own.

The number of splits makes up your score. How many splits can you pull off? 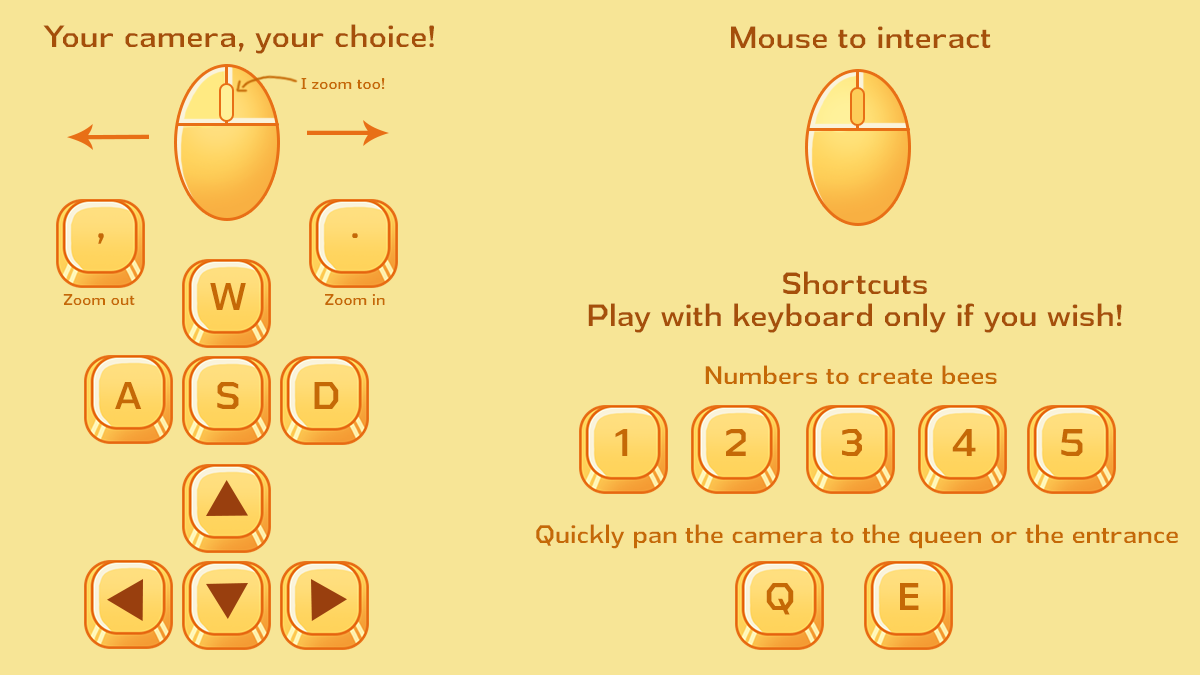 There are many ways to control your hive. You can use a combination of mouse clicks and keyboard commands or play using either one! All the keys are listed in the image. There is no way to rebind any keys as of now. You will be able to access the settings by clicking on the settings button in the title screen, or from within the pause menu while in-game. 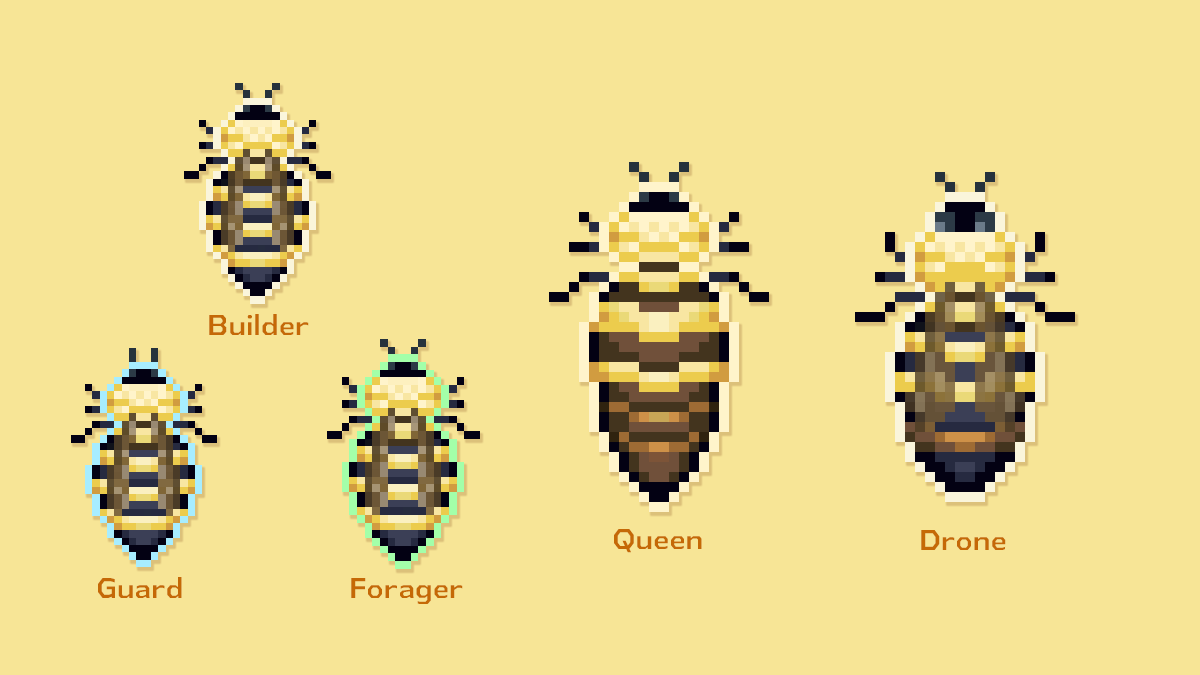 These are the bees you have at your disposal! Once a bee is born, it's part of the hive until it dies or splits off.

Builder bees are the bees that stay inside the hive, building honeycomb and taking care of the queen and larvae. If all your honeycomb cells fill out, you won't be able to lay eggs or create honey! They count as "worker bees" for the split requirements along with foragers.

Foraging is another task worker bees can have. Forager bees are the ones that go out into the world and bring back delicious nectar and pollen. Yum! After being laid inside cells, nectar becomes valuable honey. Each forager brings back 1 nectar and 2 pollen. They count as "worker bees" for the split requirements along with builder bees.

Sometimes, foreign bees or other dangers come to the hive. Guards make sure to stay by the entrance and only let allied bees come in. They'll fend off any opponent for as long as they live.  Each guard can stop one intruder at a time. Guards will never split from the hive.

The queen is the most important bee in the hive! She lays all the eggs, including the ones that will create her own replacement. When she's not beesy, she likes to sit in her dedicated queen cell. The queen cell cannot be filled. To quickly find your queen, press Q or the queen button! The queen has five hit points and regenerates one during each winter. If your queen bee gets killed or starves to death, your hive will perish! You'll need to lay another queen before you can split.

Drones are born to mate with queens from other hives. They are so dedicated to this one and only goal that they die after fulfilling their purpose. Ouch. You'll need four drones before you can split your hive.

Robber bees look like normal bees but with a red outline.  If your hive survives past the first winter, they might come to your hive to steal your honey! Guards will try to keep them away. Occasionally, the robbers might form a swarm and try to attack your hive with their own miniature army. Instead of settling for honey, swarmers will try to kill your queen! Once your hive starts to grow, make sure you have enough guards to defend against swarms. 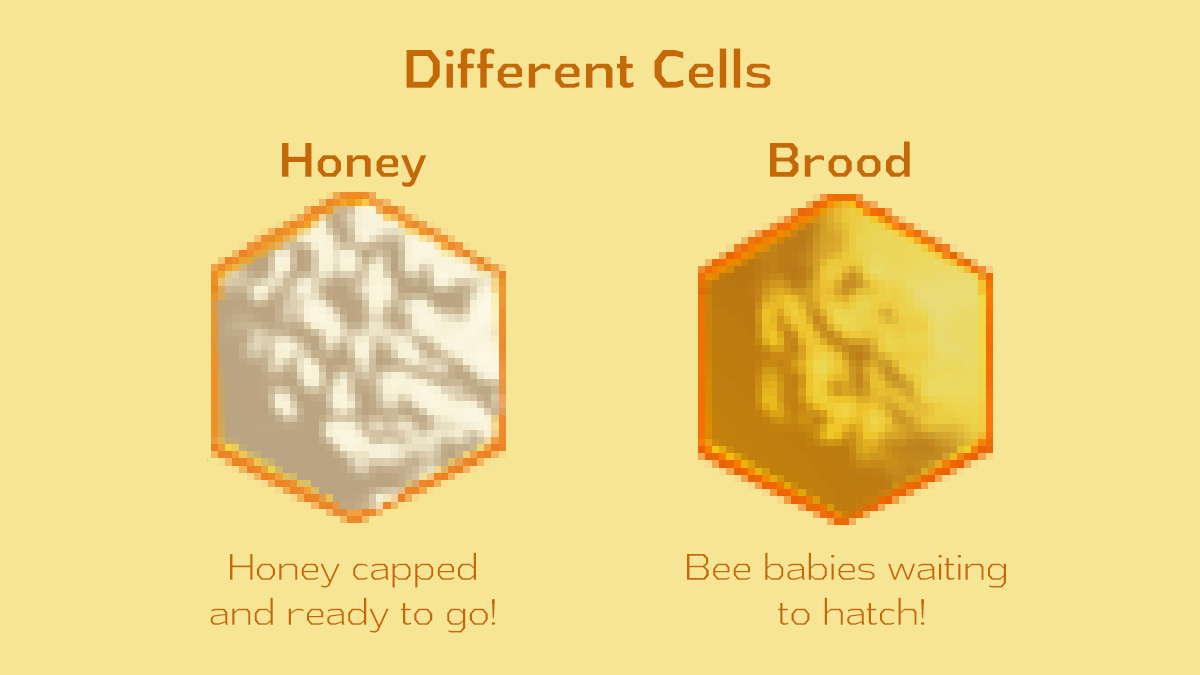 Both honey and unhatched babies are stored in cells. You can have as many cells as your pollen resources allow. The queen's personal cell will continue to move deeper into the hive to keep the queen safe and cannot be filled with anything else.

You will also encounter the baby queen cell, which works exactly the same as a normal brood cell except there can only be one at a time!

You're ready to beegin your bee adventure. Have fun! 🐝

Ooh, what a satisfying project!