Played the Steam demo and cooked a dubious meal. I also made an axe and tried to climb like in Getting Over It. I like some of the ideas, like VRM support, and ability to control the shape's thickness. It would be nice if there was an option to turn off the player avatar since it covered my vision when crouching, but it's not a huge issue.

Good luck, and I hope people build a lot of dumb stuff using the future mechanics. I had fun, and will check out its future on Steam. 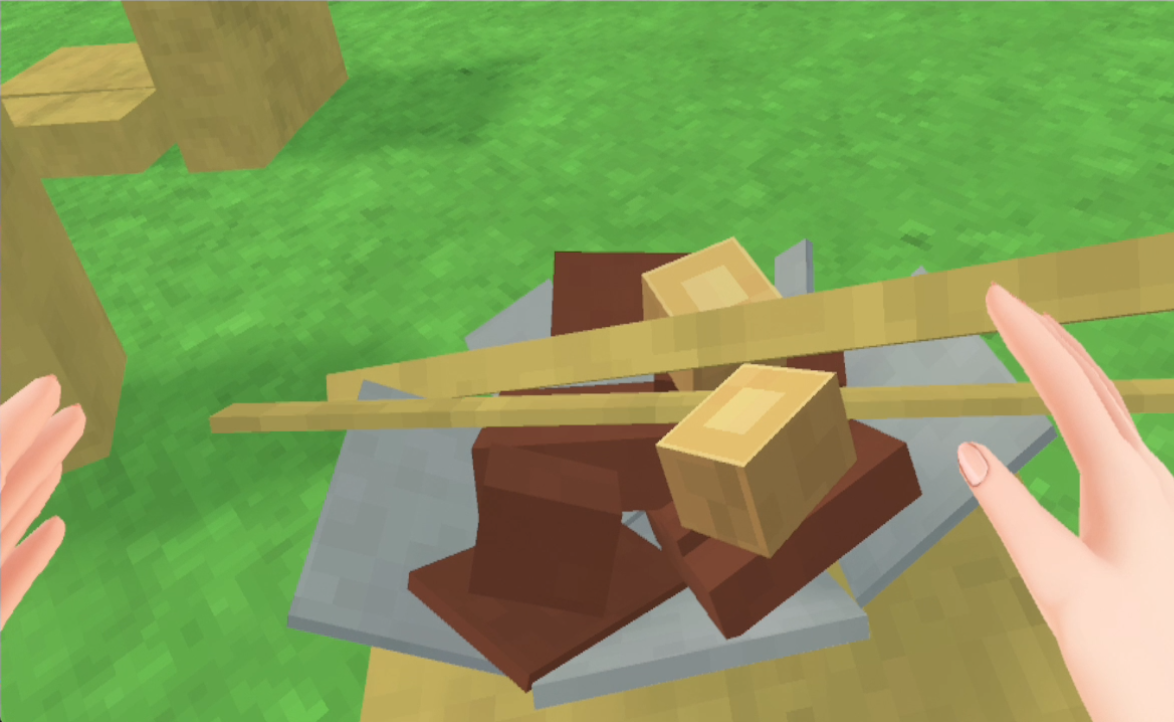 Interesting control scheme. The aesthetic also reminds me of Zone of Enders 1, with the whole "fog to simulate city darkness" aesthetic that I love.

Will be neat to see how this goes.

Will give it another try and see how it plays with those into account. Maybe I try to speed through too much

I think it was neat, but could use quality of life features. Instead of crouching all the time, I would've preferred a generous force grab. The goal object could've snapped in, to incentivize dumb stuff like throwing it from a distance.

I think it was cute, the training level was pretty funny being a boxing ring.

I do think the first level should've been more lenient, it's hard to win unless you have perfect timing. It would be nice to have some mechanics like one dash for a level, so you could have longer scarier levels.

I wish that throws operated on normal speed instead of being slowed down, to incentivize you to make riskier moves if its just out of reach.

I think it was fun, and I appreciate how experimental the control scheme is. However, the learning curve did test my motion sickness and ability to fly around; but you can get used to it.

I appreciate levels had a visible structure, with pillars and powerups elevating from the water, but I would've liked to have more things like that to shake up my expectations. Control scheme wise, I'm not sure why analog click is the dialogue continue prompt, and the physical menu buttons I've found to be *somewhat* annoying.

Ultimately I had fun with it, and I honestly think this game handles the minimal production art direction better than a lot of VR software.

Real Half Life Deathmatch vibes- pure chaos, zero reason.
It has a meta this early, I need to adapt.

Solid game with nice art, music, and gameplay. Oddly addicting. Feels strategic in 2P where you try to maximize what powerups both players can grab.

However, it would benefit from few tiny improvements. More resolution options for ultra low end boys. 2P input should also be used in single player. WebGL version on Itch and NG to lower the friction to try it out.

Still didn't beat it since I suck at shmups, and my machine is a potato, but it's put together well enough it's a matter of when, not if :p

All around a better experience. While some issues still remain, I find myself playing for longer. Some stuff that still annoys me:

-A lot of mechanics aren't fully understood until you get used to how they're set up (you get no bombs on respawn until you manually break a canister), so there needs to be a comfortable tutorial level.

-Dash shouldn't be exclusive to shift, you should also be able to double tap a direction. Dashing in mid air is super helpful, but also uncomfortable.

-Leveling up and down should be more obvious. When I see five balls next to the aim reticle, I don't know what that means. Have a plain obvious "LEVEL UP!" notification pop up near the player, and give a vertical level bar right next to shield. Dying also shouldn't take you to level zero, should just level down.

-The label regarding what item you just picked up should be larger. I didn't realize what I picked up was a shield charge until halfway through playing.

-All powerups should move towards you when nearby. This is huge. A lot of life or death scenarios ended in death because I was like 1 unit away from a power up, hopping around.

-Powerup canisters should break in much less hits. It's too risky to go for a powerup when it takes as long to break the canister as an enemy.

-There needs to be more checkpoints and levels should "know" their difficulty more, the escalation is a bit much still. The first zone still gives me so much trouble. Also levels should be shorter.

-There should be shield charges during a boss. The 1st boss should also have less health, way too difficult for a first level.

-The enemies that spawn out of the generator home into you too fast and too aggressively. During the boss this is a total pain.

-There seems to be a bug where if I die enough times, the game just freezes at checkpoint. Does it have something to do with me focusing out of the window for a bit?

A lot more fun than the previous demo, but I'm still whiny :p I can feel the input you took into account, and it's better because of it. Just a little more and I think you should go into full production.

The verticallity makes the game feel so much better, the hover is lovely.

It's fun. However my main issues are readibility related.

The first level escalates in difficulty way too fast, and at a point the checkpoints are too harsh. It feels like handling some of these rooms is like just adapting to move in a way that throws the enemies off, rather than paying attention to the specific patterns. However, I do appreciate the room like design. I think it's a clever idea for this kind of game. More verticallity can keep things fresh between rooms.

There is no invincibility buffer, and I feel when making a 3D shmup you have to embrace the fact that readability will be one of your hardest to solve issues when you've got multiple patterns happening in 3D space. I don't think the solution is fixing readibility 100%. I think being generous regarding the chaos is a good way to tackle it. Gimme a counter, that if fails eats fuel, otherwise deflects the bullets fired at me. Gimme a hover or double jump. A lot of these patterns are vertical after all; *even a little* would help a ton. There are options I just can't do since the game is feeling cruel about it. I wanna grab a power up and make a winning move, but like 5 enemies are stationed right around it.

There isn't enough visual feedback when I level up or collect a powerup. A little notification would do.

I think the music is okay, but it's repetitive for the level's length.

Despite dumping a heap of critique, it was fun. Getting a power up and taking out a hoard you had trouble with was neat. Managing to successfully dodge a heap of bullets and begin picking up on what enemies I want to take out first felt a little strategic. Dashing around enemies feels fun. With gameplay polish, I think this could become console release tier. The visuals are simple, yet the combination of elements you put in feels unique. I can't find another game that plays or looks like this, so it's definitely a unique flavor of fun. And it's certainly worth keeping an eye on.

It's not bad. I like the loose flight control, it feels pretty good to move around, though it could've upped the difficulty. Simply having multiple enemies and putting pressure could've made this a a lot better. I want to use my spicy drifts for combat!

Come to think of it, it could've gone full silly (flappy bird weight on each flap), or full on survival deathmatch (50 dragons, 1 health point).