Aside from being really funny, the game uses a really interesting mechanic to be really challenging.
Here is my take!
love the game btw. 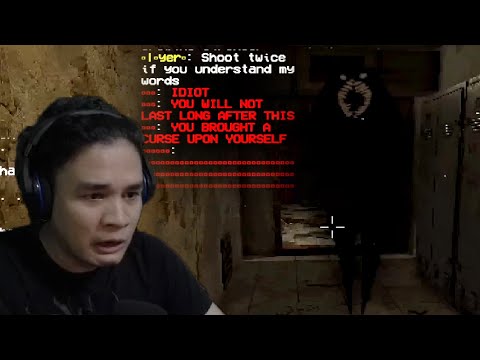 there were 2 things that annoyed me in game, because I believe there were some missed opportunities here that needs to be implemented in my opinion.

1. The jumpscares felt too repetitive in my opinion, because they always just pop up in front of you and then disappears. But its kinda cool that instead of just one ghost, there are more of 'em now. They even talked in morse code, which was a great implementation to them.

2. I felt like its a missed opportunity to talk to the "shadows" with the chatbox(not counting "player 2"). A small interaction, like keywords that makes them reply to what you've said in the chat box. Again, maybe I just missed it. But still, its a cool addition, I just wished it was done right.

But, all in all.. I liked it, especially the aesthetics of the game and its details. The art style of the game reminded me of half life 1, maybe it was because of the revolver. I would love to see an updated version of the game if there ever will be one. Great game!

This game felt like it belongs to /r/Nosleep section of reddit, and thats a good thing(I like that subreddit). I really liked how it all unraveled at the end. Wish to see more games like this, they hit the nostalgia just right.

I enjoyed playing this game.
It seems to me that it has some missing textures at the kitchen.

Game is a bit too dark but I think that brings the scary atmosphere of it. Not the best graphics but, It manages it by giving you a story.

Although it's glitchy at time, but its just a minor problem for me.

The only thing I can complain about is, the performance of the game.

The concept is nice, specially the art style of the game.

Wow, this game made me scream out loud and defeated me.

Interesting game to say the least. It's one of those boogey man type of games, where you defend yourself with a flash light.

Definitely going to make a fullplay through of this.

the tension build up is great, but theres a couple of problems the enemy can't get inside of the rooms, so if you go inside and the enemy is just out side the door then its game over and You walk really really really slow.

But I do love the twist at the end

i made this game as part of my 3 random horror game, and its the first game in the video.

Had fun making this one, Although it's shorter than the other games made by dave.

but its all in all enjoyable experience.

Sometimes muriel will get stuck at the stairs at the attic.

I had a problem at my first try of the game. It won't let me pick up one of the items you need to collect.

too bad the game is short I would love to play more of these kind of games.

I love how there is 3 sections of the game.

Nothing personal kid *teleports behind you*

Thats basically how the enemy in the game works

I had fun playing and making this video

The game is just a little bit blurry, but I like the game it has a mixture of P.T and Layers of fear.

I would like to point out that if you're not fast enough at the end, the enemy AI will just stay at the front of the door, leaving you unable to complete the game. So you'll have to let the enemy catch you in order to restart to checkpoint and then run fast after you got the key and head to the door immediately to unlock it and finish the game.

here is my video of it.

I played this in my 3 random horror game series

I really like the art style of the game reminded me of minecraft and silent hill. I just really wish it wasn't that short, but the atmosphere of the game is where it attracts you.

I play this in my 3 random horror games series.

I kinda like the setting of it, it reminded me a lot of cry of fear for the gun play and monsters. All in all it was really cool, I hoped there was more in to it, I really like where the story is going through.

I love the mechanics where you can see between worlds.

I wish there was more though.

Reply
Contemp comments · Posted in Contemp comments
aj1stly1 year ago
Wow, that was amazing for a short game. I wish there was more. Here is my take on the game!
Reply